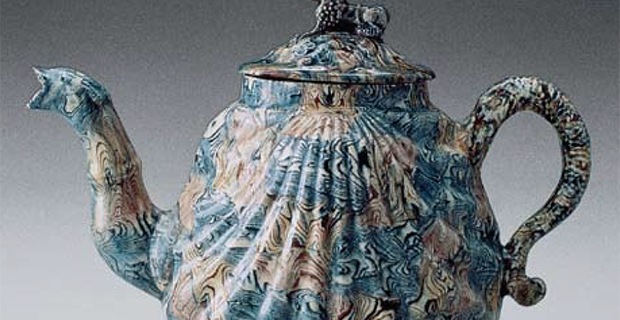 Agateware pottery features swirling marbleized colors and was probably first developed to imitate the qualities of agate, a semiprecious stone with striated patterning. These swirling effects can be created either by throwing with a prepared mixture of colored clays, or by working with thin slabs of colored clay that has been layered to create patterns. In today's post, Michelle Erickson and Robert Hunter demonstrate how to create agateware using the latter of these techniques. Glazing isn't the only way to create sweet surfaces! - Jennifer Poellot Harnetty, editor.

Making agateware is a complicated process; the marbling, instead of being produced on the surface, goes through the body and it requires a different set of skills other than just competent throwing. The initial preparation of clay is the key for creating laid agateware (figure 1). If using naturally colored clays, do tests first to be sure the clays are compatible. The shrinkage rates and firing temperatures need to be the same. Additional considerations include the density, plasticity, elasticity, and strength. The clay slabs are first stacked in a selected sequence (figure 2). Rather than wedging, the stacks are slammed onto a hard surface to elongate and consequently thin the slabs (figure 3). The process continues with cutting and restacking the slabs, thinning and increasing the numbers of layers (figures 4, 5, and 6). The ultimate success of the agate patterning lies in the care taken at this initial stage. If you want more colors in your agate pattern, the three color clay slabs can be prepared in the same way. Once the layered slabs are made, they are trimmed to equal rectangular sizes (figure 7). 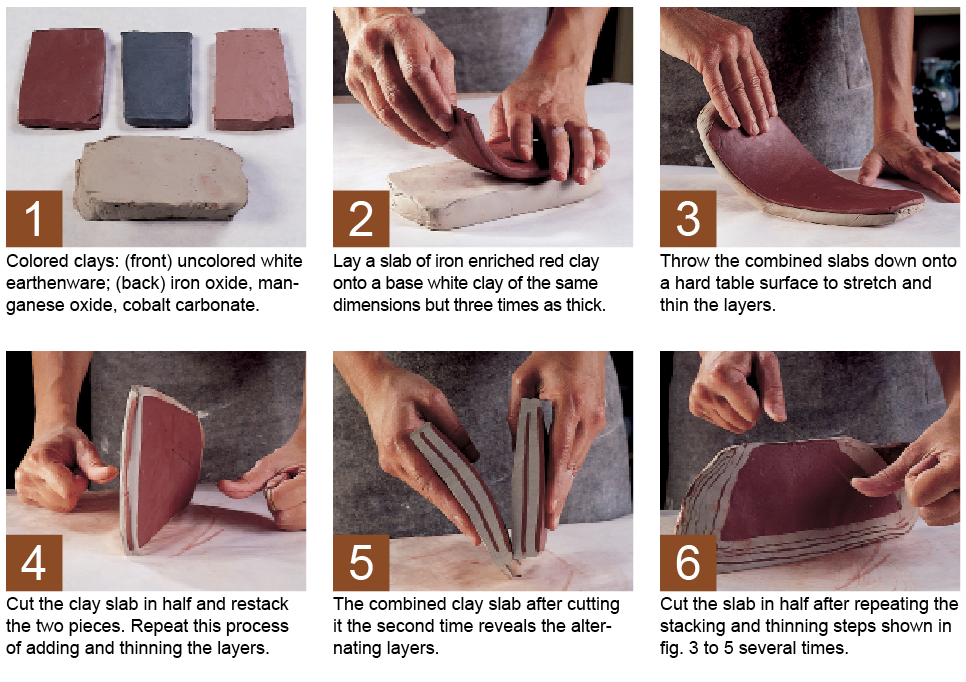 Piecing Together a Pattern

After these slabs of thinly layered clays are prepared, they are rolled into tight coils (figure 8). These coils are then arranged, sometimes by alternating colors (figure 9), and carefully pressed into a single mass (figure 10). From this amalgamated mass, thin slabs are then cut and arranged on a flat surface to begin forming a sheet (figures 11 and 12). At this point, the outcome of the agate striations can be controlled by the placement of the slabs. Once a reconstituted clay sheet is made (figure 13), it is cut into strips and reassembled to emulate the arbitrary nature of the agate pattern (figure 14). Examination of antique pots suggests that such strips were cut and rearranged several times on both a horizontal and vertical plane or orientation. In working through his technique, it is clear that a number of variations are possible through the deliberate arrangement of the agate pattern.

For the demonstration, the patterning of the agate has been left moderately coarse so that is it easily observable in the photographs (figure 15). The slab is now usable. 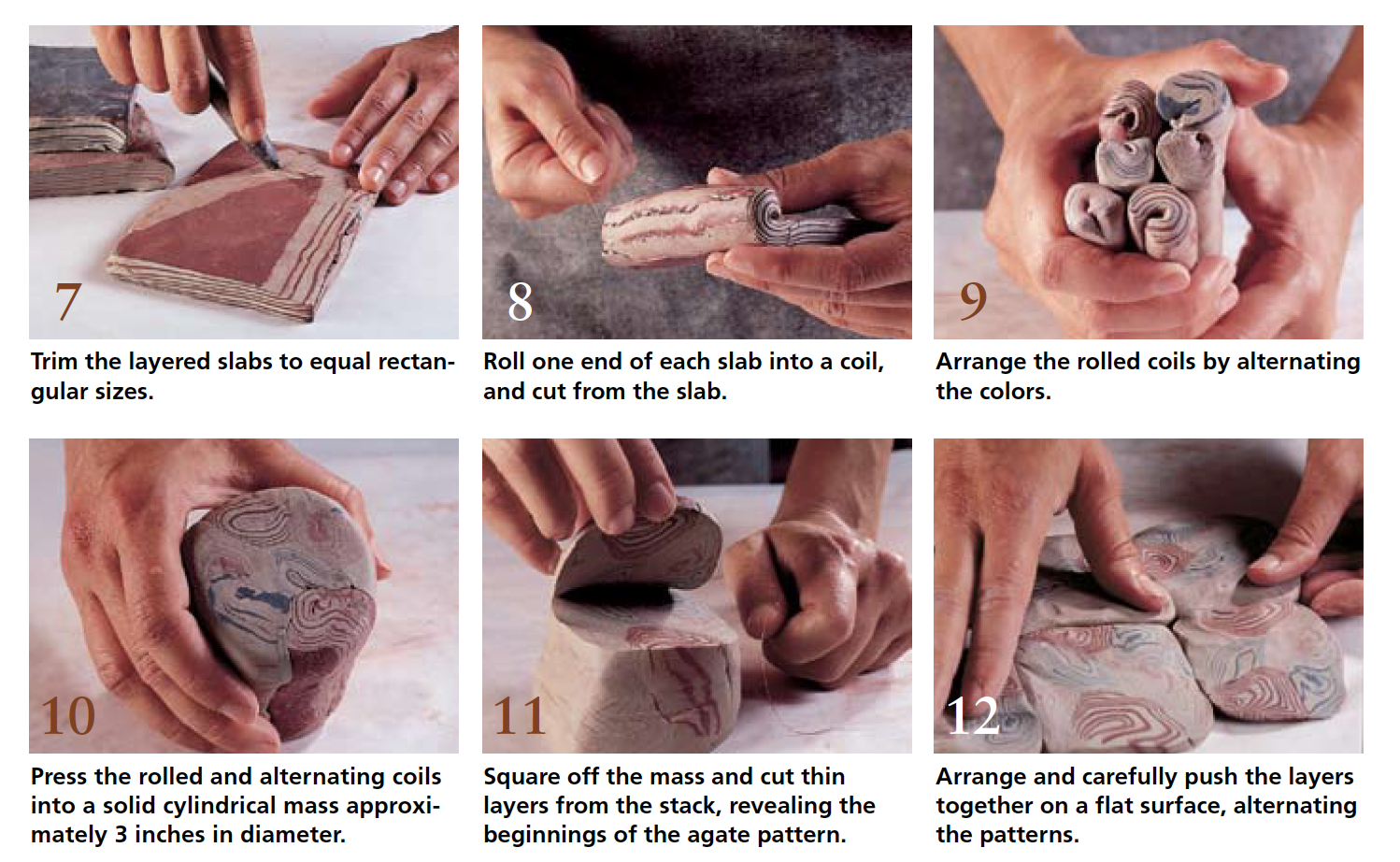 Once a suitable agate pattern is created, the thin sheet of clay is ready for molding. In most cases, it appears that all elements of laid agateware were created by press molding (figures 16 and 17). This process requires a separate plaster or clay mold for each component of a pot. This would include the body, foot rim or feet, lid, finial, spout, and handles. As with the thrown agate, joins may show smearing, or distortion. The teapot shown here uses two-piece molds for the pecten shell body, spout, handle, and Fo Lion finial (figure 18). These molds were taken from original master models sculpted by Michelle Erickson.

Once the two halves of each part of the teapot are pressed in separate molds, they are ready to be joined. The edges are lightly scored and moistened. The two molds are aligned, and the seam is closed by working from the inside through the opening in the neck (figure 19). The exterior seam is cleaned up, then the spout, handle, and any other added elements are attached to the body (figure 20). For lidded forms, keep the lid on during the drying process. If necessary, line the rim or gallery of the pot or lid with a sheet of paper to keep the two from sticking together. Once dried, it is possible to enhance the agate surface with a light scrubbing using the equivalent of a fine steel wool; however, any heavy smudging or distortion cannot be altered. Once dry, the pot is bisque fired, glazed, and fired again. 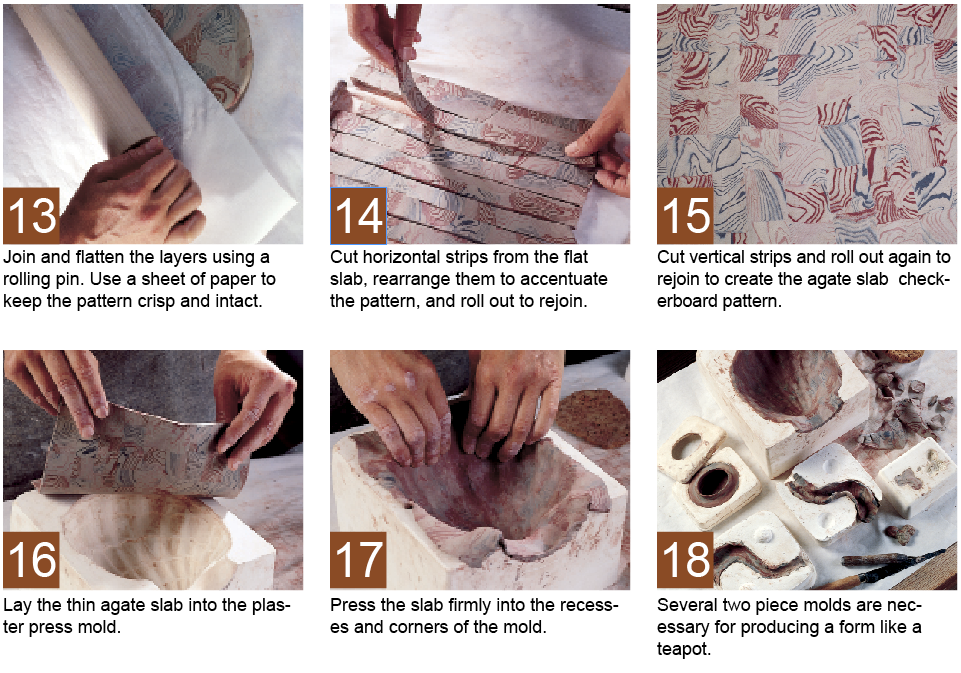 A rich opportunity exists to further study the production history of English agateware. The laid agate technique is an extremely complicated procedure. Indeed, the replication of the processes presented here required nearly two years of trial and error research.

For laid agate, although the patterning is often described as random, we have concluded that it is very deliberate. This deliberateness can be seen in a variety of other agate patterns that have yet to be fully classified. 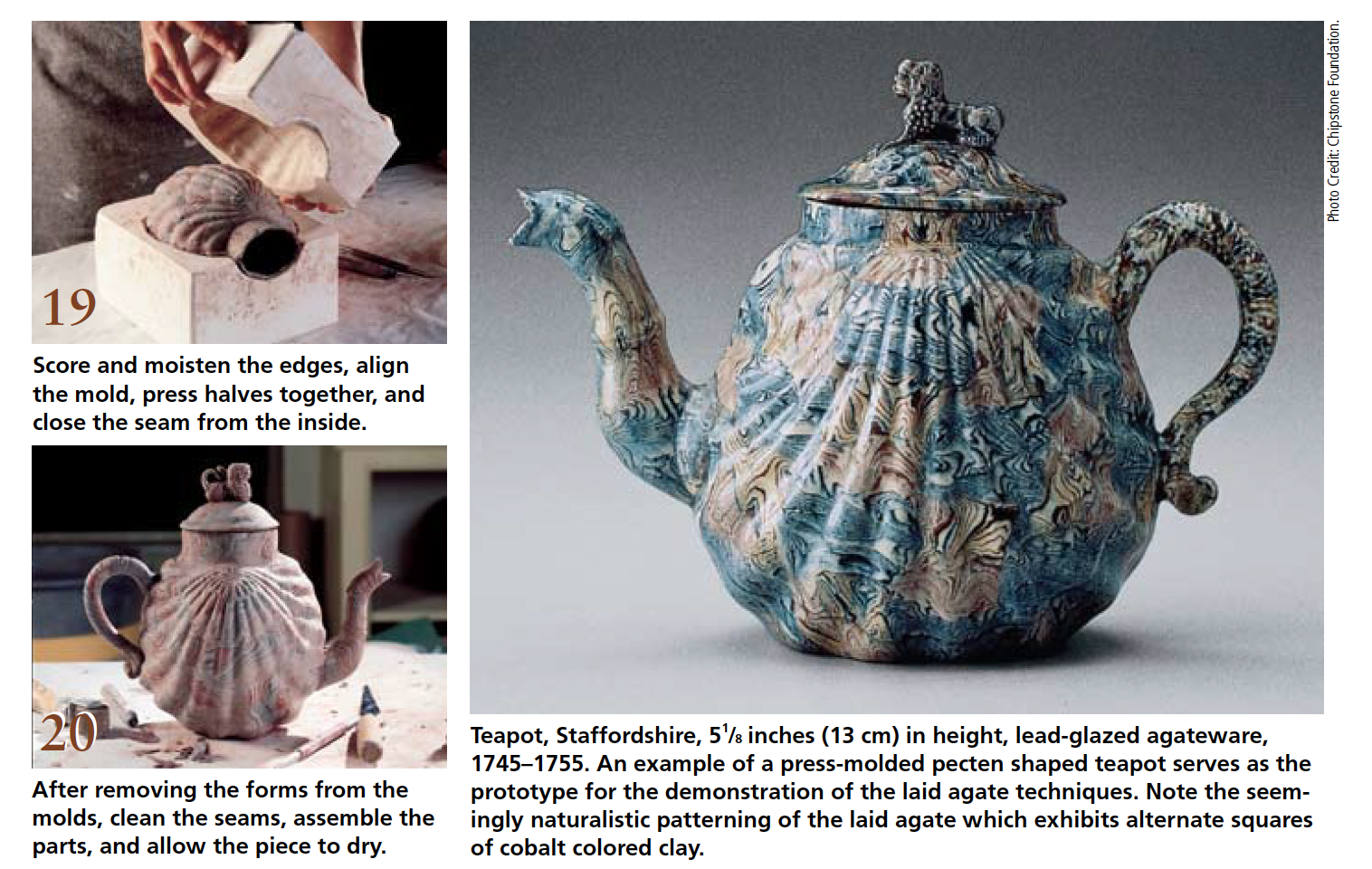 Without question, agateware can generate a kaleidoscopic effect that some may find dizzying. A fierce competition for antique examples exists among a small cadre of collectors—past and present. Perhaps this fact alone substantiates the often heard claim that agateware is considered “the ultimate refinement of the potter’s art.” We hope this demonstration has provided some insight into the mysteries of the potter’s art and that new research on the history of agateware can be conducted with fresh eyes.