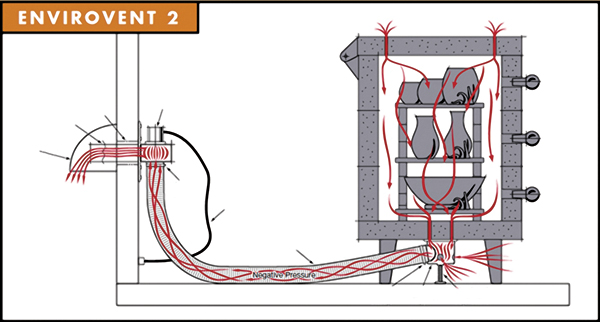 If you are looking to buy a kiln, you will need to consider a kiln exhaust system too. Typically we think of kiln vents as primarily a ceramic studio safety precaution, but a proper kiln ventilation system benefits both the work inside the kiln and the people (and don’t forget studio pets!) around it. In addition, a good kiln exhaust system is good for your kiln!

In this post, an excerpt from the Ceramics Monthly archive, Dave Finkelnburg explains how a kiln exhaust system works and why all kilns should be vented. - Jennifer Poellot Harnetty, editor

PS. Learn more about the problems caused by not venting a kiln, and how to properly use and care for your kiln vent in the April 2017 issue of Ceramics Monthly!

Kiln vents are primarily used to protect the health of people around the kiln. An additional benefit is that a vented kiln produces cleaner firings, ultimately contributing to brighter glaze colors and fewer glaze faults. A kiln exhaust system can also be used to cool the kiln more rapidly, but in a controlled manner.

How Does Kiln Venting, or Not, Affect the Fired Work? 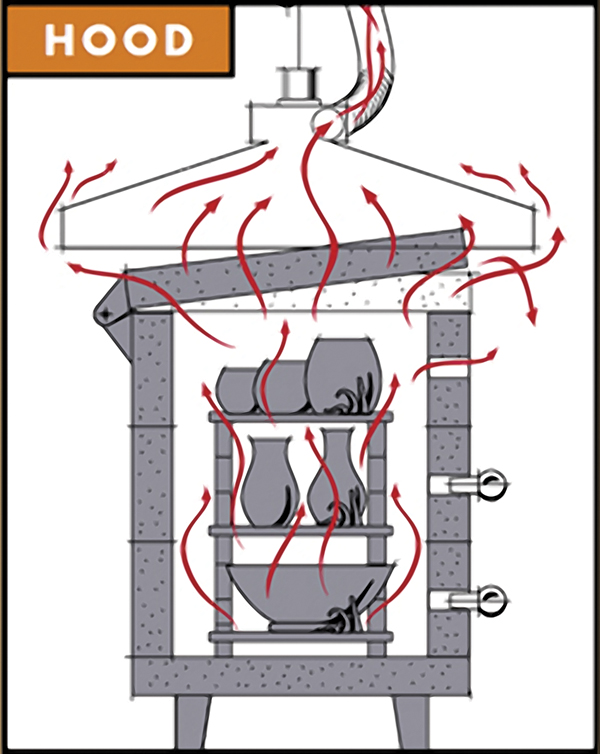 There are several excellent kiln venting systems on the market. They can be separated into two simple categories. One is hood-type venting and the other is direct venting.
A kiln vent hood is installed above the kiln and operates in the same way an exhaust hood works above an ordinary kitchen stove. An exhaust fan inside the duct leading from the hood to the outdoors pulls air in from around the kiln beneath the hood.
A hood exhaust collects fumes that escape the kiln. It also removes a significant volume of room air. The efficiency of such a system depends on the volume of air drawn through the kiln vent hood relative to the volume of the room, and also on whether there are other drafts in the room that can disrupt air flow into the hood. A proper kiln vent hood relies on an adequate amount of makeup air being allowed to flow into the room, either under doors, through open windows or doors, or through inlet vent openings in a room wall or roof.
Kiln vent hoods are most useful at protecting people in the kiln room from harmful gases coming off the kiln during a firing. They are not necessarily completely effective at removing all kiln fumes from a kiln room. Because of their design, they do not pull fumes out of the kiln itself.
A direct vent uses a fan or blower to pull air both from the room and directly from the kiln. This is done by connecting an exhaust fan to the kiln using a duct and a fitting that mounts over one or more very small holes in the kiln wall or, more often, the kiln floor. To pull some air from the kiln requires that the same amount of air has to be flowing into the kiln somewhere else to replace the air flowing out.
A common arrangement involves mounting the exhaust fan on a wall or stand near the kiln. A flexible hose connects the suction side of the fan to a housing over a small vent hole in the center of the bottom of the electric kiln. The exhaust duct is routed outside the kiln room, either through the roof or through a wall away from any windows, doors, or air intake openings.
The housing either has several holes in it to admit room air, or it is mounted with a small gap, typically ¼ to ³⁄8 of an inch, between the housing and the kiln bottom. When the fan is running, it draws a small volume of air from the kiln and a larger volume from the room at the same time. The room air mixes with the kiln vapors to cool them enough so the exhaust duct is not hot.
A squirrel-cage wheel on the fan, also called a centrifugal fan, is most common (rather than a propeller fan, known as an axial fan). That’s because the squirrel-cage fan will move a similar amount of air despite moderate restrictions on the inlet or outlet of the fan. Air flow from a propeller fan, on the other hand, will fall if there are restrictions on the fan inlet or exhaust.