When Dianna Pittis switched from making pots to making sculpture, she had to invent some clay tools that made it possible for her to realize her vision. Making fish seemed straightforward enough—until she actually started making fish and had to deal with the logistics and technical aspects of building and firing them safely.
Below, Pittis explains her process of discovery and invention, as well as her process from forming through firing. —Jennifer Poellot Harnetty, editor. 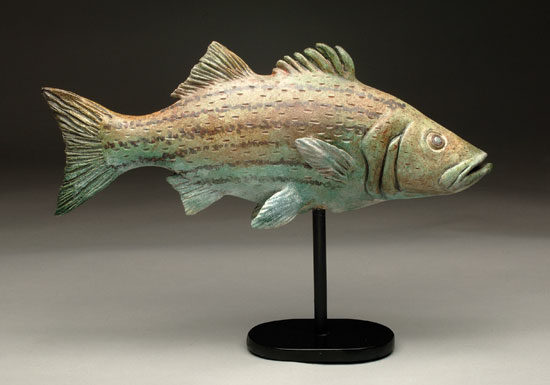 I’d been throwing for thirty years and my arms were protesting. In the process of eliminating throwing from my work, I began making slab-molded fish in 2002. My first two fish were anatomically incorrect, but they had character, spunk and, more importantly, sold quickly. I didn’t have a clue what a fish really looked like, so I visited the fish section of a local grocery store and had a good look.

Then a friend gave me two books, which I understand to be the fisherman’s “bibles” along the Atlantic coast, especially around Florida. Armed with these photographs, I began making fish that looked like actual fish. Again, these sold quite readily. So now I could focus on the technical issues

First, I make a paper template and cut out two slabs. I wrap the edges of the slabs with plastic to keep them from drying. Next, I drape them on cardboard cylinders of varying diameters to give some dimension to the fish body. When dry enough, I add slip on the edges and assemble the slabs. I then cut a small hole in the bottom of the fish where a custom-made iron stand will ultimately go. I blow into this hole and the fish puffs out. It usually ruptures somewhere along the seam so I just plug up that seam opening and have another go.

I knew I wanted to raku fire these pieces, and I came up with a couple indispensable tools to make this process as efficient as possible and still allow me to achieve the look I wanted. I came up with the idea of making a “cradle” to hold the fish so I could glaze them all over. I throw a bottomless cylinder about 5 inches tall, with a wide flange on the exterior about 1 inch from the rim. I then squeeze this into an oval and cut a groove in both ends. One groove holds the head of the fish, and the other holds the rear. The flange provides the necessary surface area to grasp and lift the cradle quickly without touching the fish. The fish only touches the cradle at two tiny spots, and I dab a bit of alumina hydrate there. The only problem that I have encountered is that cradles break after about three firings.The fish are fired in bisque-firing cradles and specially-designed tongs are used to easily remove them from the kiln for post-firing reduction. 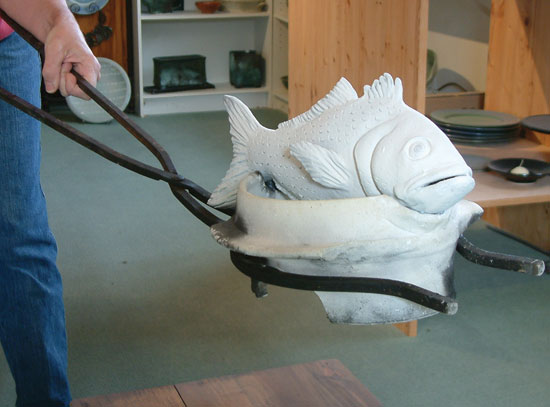 I also had to specially design and manufacture iron tongs that could lift the cradles that hold the fish. These tongs allow for the necessary leverage and speed to unload the kiln rapidly, and they work terrifically. The cradle and tongs allow me to make larger fish. The largest I’ve made so far is 26 inches long.

I fire to Cone 05, and I pre-bisque my cone packs for raku so that they don’t blow up in the early part of the firing. I use a raku kiln that fires up like a rocket. The first firing takes about an hour and fifteen minutes; thereafter, about forty minutes. I have to let it cool down at least twenty minutes before reloading.

I have a few 55-gallon iron drums and miscellaneous metal cans, but none were suitable for unloading a 26-inch-long fish and the cradle, which, together, are pretty heavy. I came up with the idea of reducing in a big cardboard box. I get big boxes from wherever I can find them (I’m a box aficionado and have been known to follow store clerks who are about to cut up an ideal box). Using long boxes, I cut three sides of the top to make a “flap-lidded” cardboard box. For the necessary speed required for proper reduction, the fish must be removed and enclosed within the box very quickly. This requires two people. As I remove a cradled fish from the kiln and place it into the box, an assistant holds back the lid, then shuts it and places a board on top for weight. These boxes are pre-packed with an assortment of shredded paper, sawdust, dried grass and other combustible material. They burn down completely and are quite the pyromaniac’s dream.