Going With the Flow: Using Soft Clay and Darts to Preserve Fluidity in the Finished Form Go with the flow! Jane Sawyer

If you ask potters why they work with soft clay, chances are you'll hear something to the effect of "the first time I touched clay, I was hooked by its malleability." This is one of the characteristics of clay that is important to Jane Sawyer.

In today's post, Jane explains how she throws with extra soft clay and cuts darts during the throwing process to create work that looks fluid even in the finished fired state. She also explains how she uses finger marks through slip to further enhance this effect. - Jennifer Poellot Harnetty, editor

The Fluid Series vessels started as an investigation to enhance the fluidity of clay, to capture it in the final forms, and to encourage connectedness with the viewer and user. Examples throughout history can be found where an intuitive or sensual way of working with clay has been valued, and an engaging of senses, other than the visual alone, has been appreciated. From Japanese tea ceremony and Mingei practitioners to Abstract Expressionists, gestured, tactile, mark-making in clay of a kind that explored and revealed emotional states was developed.

To highlight the plastic, tactile nature of clay challenges the concentric limitations of wheel-throwing. In throwing, a general convention of the process could perhaps be described as follows: make a shape on the wheel, wait until the object begins to dry and harden, then replace the form on the wheel to finish by trimming with a metal tool. The harder, dryer and, thus stronger the material, the greater the speed that can be used in this process. Resulting objects potentially display a machined, ‘hard-edged’ quality. 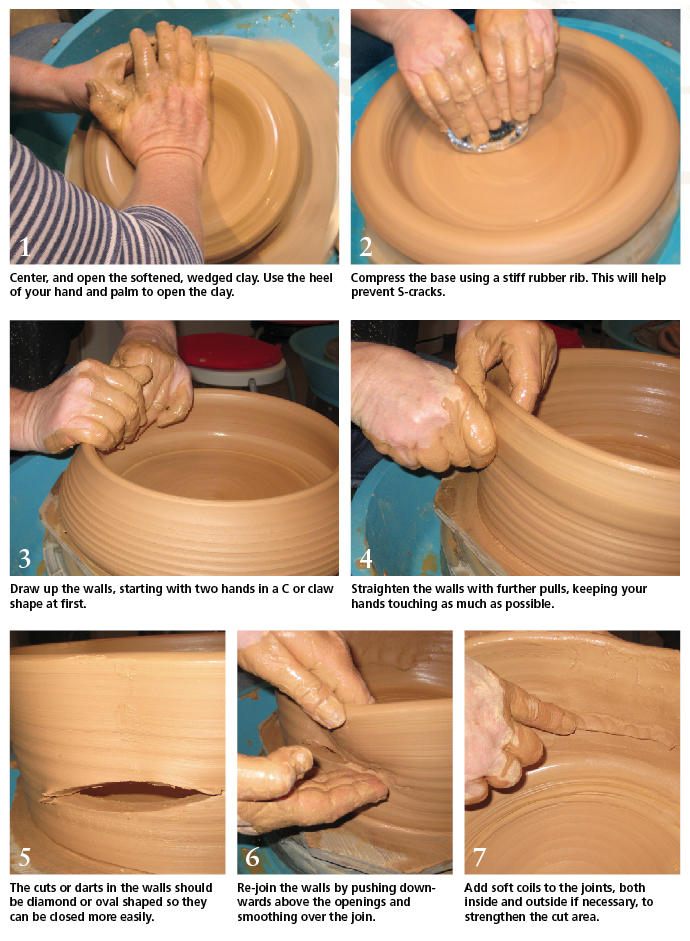 My exploration diverges from this process. Initially, I form objects on the wheel using unusually soft clay. Soft, wet clay suggests a different approach. The material is weaker, more sensitive, and responsive to gentle changes of movement. With the wheel spinning slowly, there exists the potential to reflect fluidity, softness, to be floppy and gentle (figures 1–4). These cylinders are then cut with darts, altered, re-joined, and immediately re-thrown while still wet and malleable (figures 5–9). Re-throwing the soft material allows and encourages forms to be extended, distorted, stretched, and be less predictable. Thus the original thrown object is a starting point, the base material for an exploration with a slightly unpredictable end (figures 10–12).

Developing this way of working stems from my experience of using very soft clay during my training in Japan. This provoked a desire to exploit a feeling of sensuality with clay. Massaging and stretching the soft material as it slowly revolves redefines the hard-edged machined quality that the wheel can convey. The potter’s wheel is an ideal mechanism for producing objects quickly, recording your impulses and spontaneous gestures. Finished objects can therefore embody a plastic nature, responsive to you. By using very soft clay in an immediate gestural way, you can explore the physicality of the relationship between the material and the body.

In the bowl form, I developed a way to preserve the strongly concentric, thrown nature of the bowl while also adding a meandering movement to the walls and rim. It isn’t enough for me to just cut the rim or to push the walls in. Cut rims still look cut and somewhat harsh and pushed-in walls are just that. I seek to create some integrity for the walls whereby they flow with movement. The nature of the concentric form is that it’s forever round with no beginning or end, yet complete. I use the wall of the bowl as a guide and point of connectedness, drawing the viewer closer to touch or inspect the marks I’ve made. 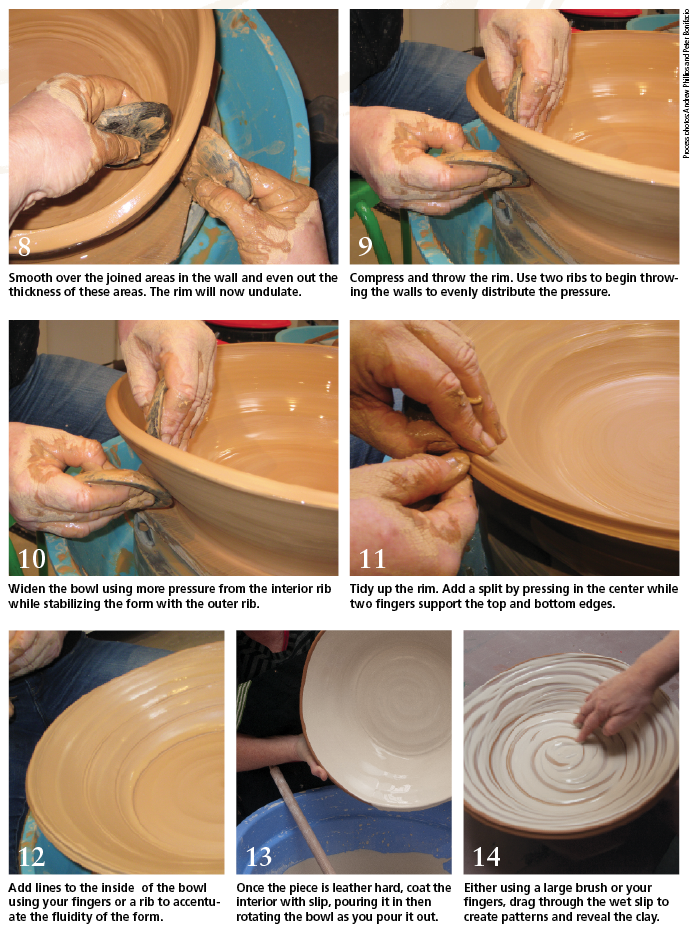 I often finish the bowls with a creamy slip coating (figures 13–14) and clear glaze, concealing yet revealing, freezing the wet, plasticity of the material and preserving the movement of the bowl walls. n * Robert Hughes, Nothing If Not Critical, Harvill, London, 1990.

Jane Sawyer holds a Bachelor of Education(Art/Craft) from Victoria College of Education and Master of Arts (Fine Art) by Research (Ceramics) from RMIT University. She lives and works in Melbourne, Australia. This article is largely taken from her MA thesis called “The Evocative Object,” 2002, RMIT University. To see more of her work, visit her website at www.janesawyer.com.au.