Although bright colors have become just as easy to achieve at cone six as they are at cone 06, Gail Kendall still prefers the low fire approach, inspired by the casual decorative style of peasantware from Europe and Great Britain.

Back in the 1960s, only the low-ﬁre process afforded access to a broad range of saturated colors. With various encapsulated stains that have come onto the market in recent years, a whole range of reds and oranges have become reliable at high temperatures.

I still work with low-temperature materials for philosophical reasons as much as anything else. My goal is to align my work aesthetically to its peasant-ware ancestors from Europe and Great Britain. 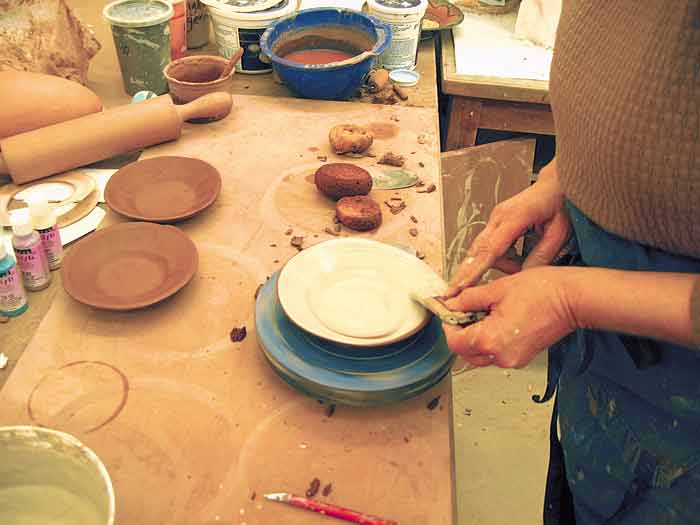 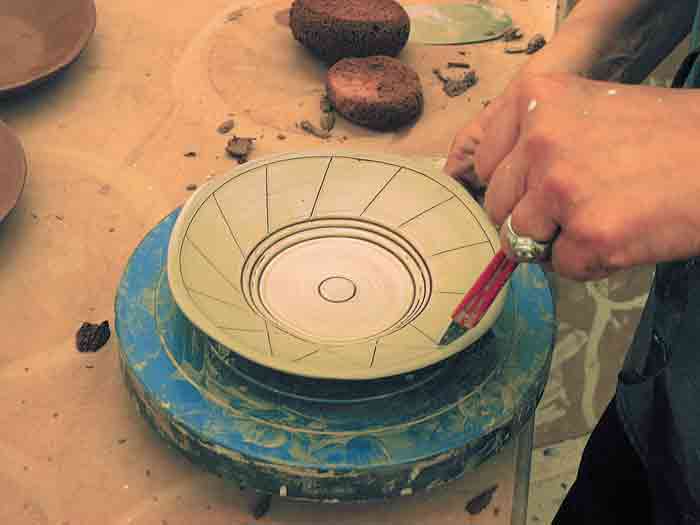 One of the aspects of peasant pots that I love is the casualness of construction and glazing that is common to the ﬁnished object. Village potters collecting scant remuneration for their labors could not invest huge amounts of time in their work. It’s likely that more basic and less controlled ﬁring technologies also contributed drips, splotches, blurring and other variations that add to the overall feeling of freedom that I admire.

Greenware is painted with White Slip (see above). I use brushes with either coarse or soft bristles, for the desired surface texture. Small areas missed are allowed to remain.

I draw through the slip on the surface. I use a sharp knife to cut through the slip to trace the shape of an edge, or create a design or texture. I also may use sgrafﬁto techniques to texture areas with a stick or pencil, or draw other patterns onto the surface revealing the red clay under the slip. 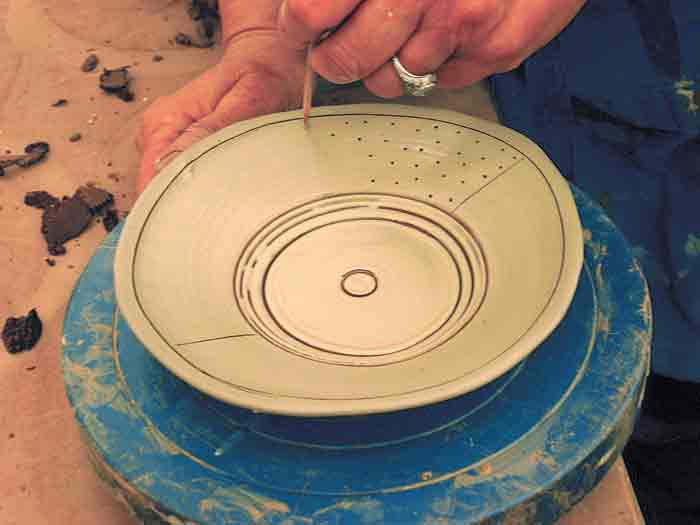 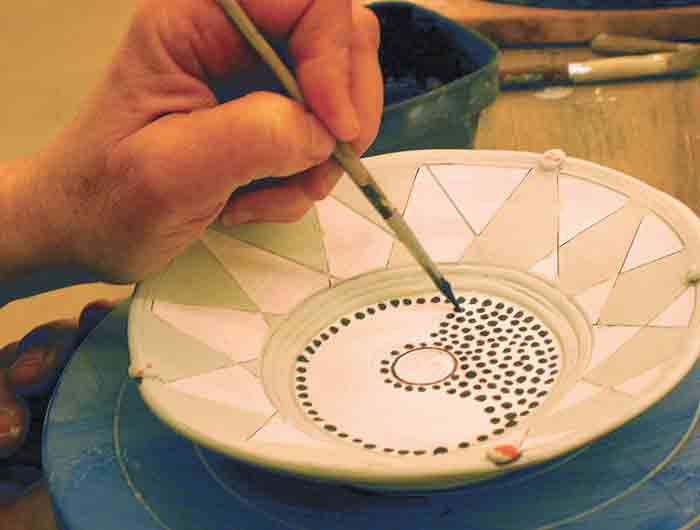 The ﬁnal appearance of any pot is affected by every stage of the creation process, beginning with forming. I allow joins, scrapes, scratches and other imperfections resulting from handbuilding to remain on the surface of the ﬁnished greenware.

Prior to the bisque ﬁring, I carefully brush or smooth away the little bits of piled up slip that accrue on the surface due to the sgrafﬁto techniques. Tiny bits of slip, if allowed to remain through all the ﬁrings, can become sharp enough to cut or scratch the user. 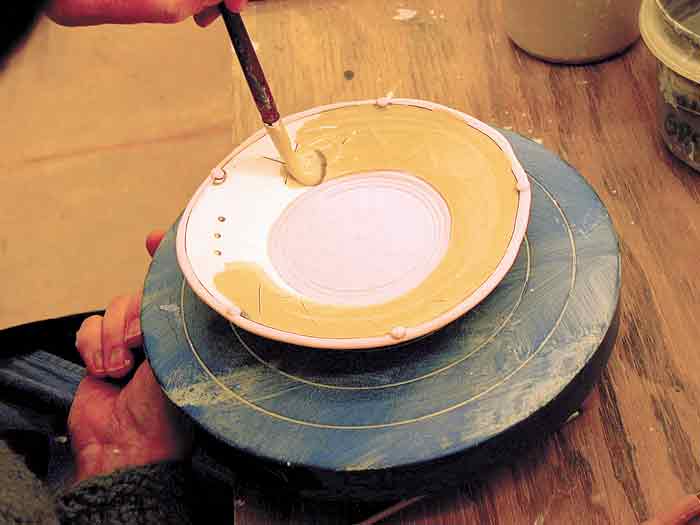 Once the pot is bisque ﬁred to Cone 03, I paint the entire surface with a black underglaze—watered down as much as possible but still opaque when applied.

After it dries brieﬂy, I wash it off with clean water and a sponge, retaining the black in the recessed details. I always use a food safe commercial clear glaze on the interior of all soup tureens and teapots, or any other form that may hold liquid. Fashionable or not, I am pleased with my work when it displays a lustrous gloss of just the right thickness and juiciness.

I apply four or ﬁve coats of Gerstley Borate Base Glaze in the remaining unglazed areas. I enjoy the subtlety of commercial gloss next to my own gloss glazes, which have a softer appearance.

I then ﬁre these pieces to Cone 03. After the work comes out of the glaze ﬁring, I may add some 24K burnished gold luster to handles, small buttons of clay, or other details.

This luster is formulated with small amounts of yellow ochre that rises to the surface during the final ﬁring to Cone 017. The luster is then burnished with extra ﬁne steel wool to reveal the beautiful shine of 24K gold. 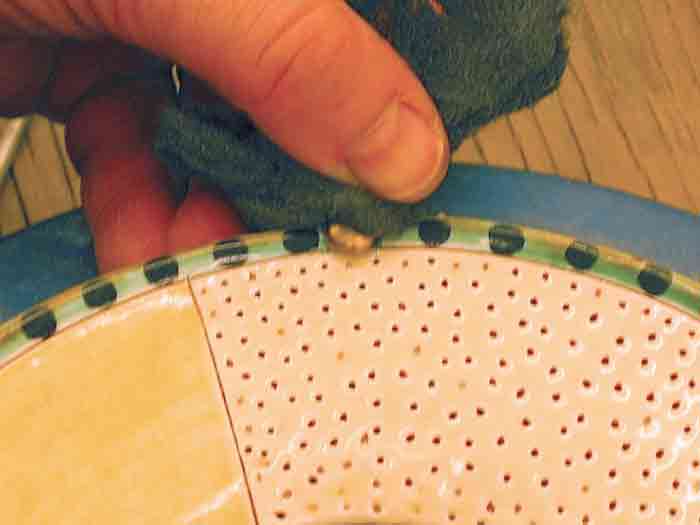 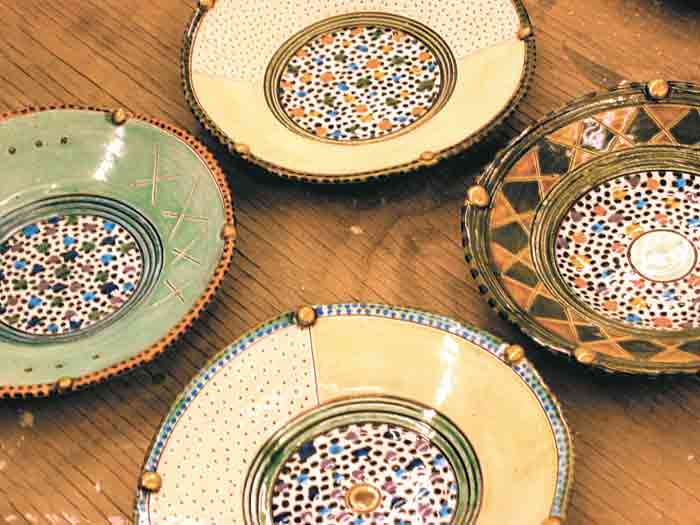 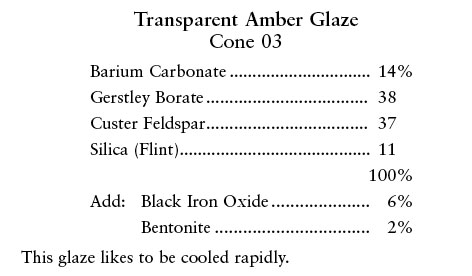 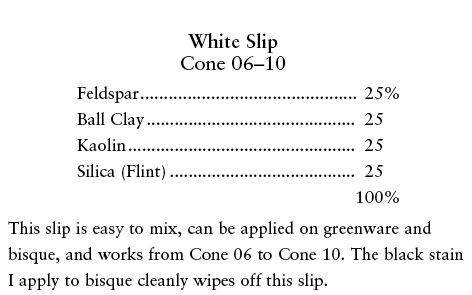 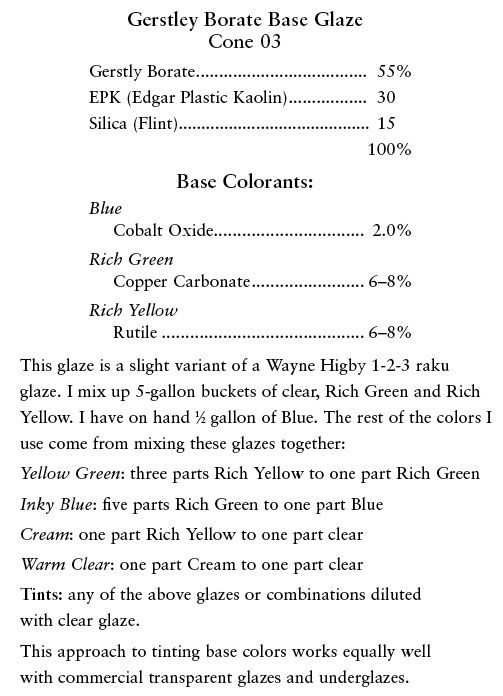