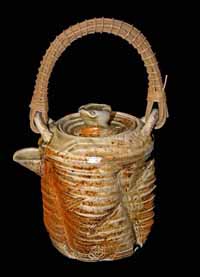 After moving from a rural to an urban area, potter Bruce Bowers realized that, in order to continue to feed his passion for wood firing, he would have to get creative. And get creative, he did. With the cooperation of the studio where he was teaching at the time, Bruce converted an old electric kiln into a propane-fueled wood-burning kiln, with great results. Today, Bruce shares the process for converting the kiln and, on Wednesday, he will discuss how he fires the kiln. Good stuff! - Jennifer Poellot Harnetty, editor

Those of us living in urban areas have limited access to firing in fuel-burning kilns, because stringent zoning and fire regulations place severe limitations on our ability to build outdoor kilns near our homes. While many potters find a community college or local ceramics organization that has a gas or wood kiln, this situation often means turning our work over to someone else who is in strict control of this crucial part of the creative process. For more serious students, this situation can be less than satisfactory.

When I moved to an urban area just outside of Washington, D.C., my only means of firing was in an electric kiln, and my work changed accordingly. Although this held my interest for a long time, I came to miss the adventure and the unexpected results that can come from firing in a fuel-burning kiln. Electric kilns are wonderful tools, but my creative needs demanded another firing method. It was frustrating to think that my options were limited.

After becoming absolutely hooked on the wood-firing process, I began to think about how I could achieve some of the same effects on my own and with my students. As it turned out, the answer was right under my nose. Glen Echo Pottery, where I was teaching at the time, had several old electric kilns in storage that we thought were beyond redemption. With encouragement from the pottery’s director, Jeff Kirk, we converted one of these old kilns to gas and added a stoke hole for wood. The entire conversion took about three hours. In my wildest dreams, I never thought the finished kiln would produce the results it has. We are able to get terrific flashing, ash buildup and, by adding a small amount of soda, a richness of surface that is usually reserved for pots produced in large, wood-fired kilns.

The kiln conversion was virtually free. We used old silicon carbide shelves (sometimes broken ones), old posts and an existing propane burner on a flexible hose. Our only cost was a few dollars for kiln wash and clay to fill the old element grooves. Further, the kiln operates very efficiently, on less than 5 pounds of propane pressure, so the cost per firing is quite low.

This is an easy classroom project that involves students in the actual firing process. Each student can be assigned a 20-minute stoking shift, and the entire class can observe and participate in each phase of the firing. They can cut and prepare the wood, prepare and stack the kiln, fire, and then unload and clean up. Students end up feeling very much in touch with their finished pots, since they’ve paid careful attention to each part of the creative process. A simple ad placed in the newspaper or a flyer posted at your local pottery supplier could yield an old “beater” kiln that is just taking up room in someone’s garage.

The bottom of the kiln was composed of two electric kiln bottoms sandwiched together. Broken shelves were then installed on top of this and the chinks between the shelves were filled with fiber insulation. This entire floor was then liberally sprinkled with alumina hydrate. Makeshift hobs, made of broken silicon carbide kiln shelves, were placed on the floor and braced brick fragments. These keep the wood above the floor of the kiln to allow better air circulation and, as a result, better combustion. The firebox, therefore, occupies the bottom 5 inches of the kiln. Both gas and wood are introduced through the firebox. 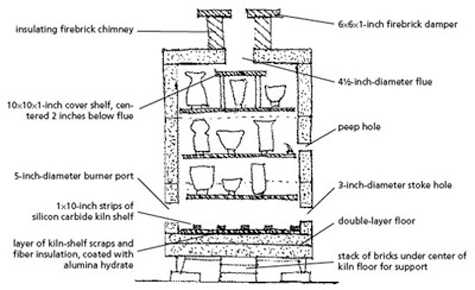 All elements and electrical components were removed from the kiln, and the element grooves were filled with a very open clay body, composed of 50% fireclay and 50% sawdust by volume. Two holes were cut in the jacket and bricks, using a drill bit and a reciprocating saw. One hole is at six o’clock (burner port) and the other is at about one o’clock (stoke hole). A hole about 4 inches wide was cut in the lid, and a rudimentary chimney was made by placing four K23 insulating fire bricks on end to form an open rectangle. The outside of the lid and the area around the chimney were then covered with scraps of fiber insulation to inhibit excessive heat loss. A damper was made by simply placing two thin sections of insulating brick on top of the chimney.

All shelves, and the tops and bottoms of all posts, were liberally coated with a high-alumina kiln wash of 50 parts alumina hydrate, 25 parts silica and 25 parts EPK (Edgar Plastic Kaolin). For wadding, we used 50 parts alumina hydrate and 50 parts EPK (all above measurements are by weight). The interior of the kiln, including the lid, was coated with this same kiln-wash mixture.

It is important to emphasize that the shelves used in a kiln of this type should not be full rounds. We used sections of old broken silicon carbide shelves, leaving plenty of room for flame circulation around and up through the center of the setting.

It is also very important to place a “cover shelf” about 2 inches below the inside of the lid, above the stacked ware. This helps prevent a cold top section and also helps create thorough circulation of the flame. A 9x9-inch piece of silicon carbide shelf works well. We were able to get a temperature differential of less than one cone between the top and bottom of the kiln.