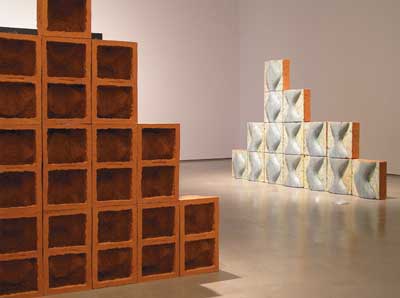 The son of a builder, ceramic artist Jason Green became very familiar with architecture and the construction process. So it is no surprise that he likes to work big when it comes to clay. His experience with architectural spaces also plays into his work conceptually.

Through his architectural ceramic sculpture and installations, Jason delves into relationships between objects, physical spaces, time and memory. Even his process was developed by borrowing from the architectural ceramics industry. Today, he explains this process and tells us a little about his work. - Jennifer Poellot Harnetty, editor

I have always been interested in the triggers that initiate recollection and how memories are often tempered by the mutable characteristics of the architectural spaces we once inhabited.

As a visiting artist at Watershed Center for the Ceramic Arts-once a functioning brick factory-I discovered a pile of old wooden molds used for making a variety of brick and decorative moldings. I used these molds briefly, and then began making my own using both plaster and wood components. Having also made several visits to Boston Valley Terra Cotta, a company that restores and renovates terra cotta façades, I had a good idea of the techniques involved in the production of larger and more sculptural architectural terra cotta. Boston Valley Terra Cotta also had an immense "graveyard" of fragments taken from buildings during the restoration process. These fragments were like complete sculptures, each telling its history with the chipped, caked, cracked and crazed surfaces that had developed over time.

Still interested in questioning the relationships between surface, architectural space and memory, I later began making flat, square stoneware tiles with surfaces cast from a mold taken from embossed wallpaper. As with the clay-lined rooms I built, this work did not intend to refer to a specific space but was meant to recall "spaces past" - the ones we grew up in and have an intimate connection to. As my pieces grew in size, and my arrangements of tile deviated from the square, they also began to elicit recollections of architectural ruins. The modular nature of my pieces allows multiple configurations while suggesting they are fragments of something larger and more expansive. Often my pieces also suggest that they may have once functioned as aqueducts or gutters with meandering channels directing the movement of liquids. The nesting of cavities and protrusions also recall the curves of the body while the thick slip and glaze are like stretched skin. The fluidity of dripping glazes, now frozen in time, bring to mind the force of gravity and the aspects of chance inherent in the firing process. 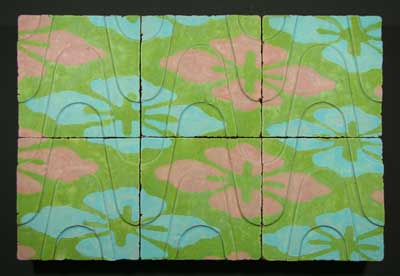 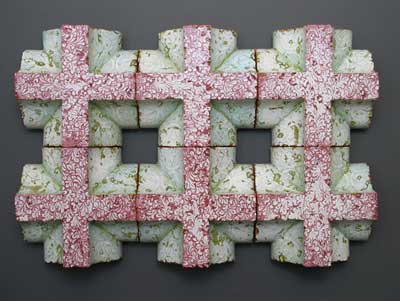 My process is borrowed and adapted from the outmoded methods used by the architectural ceramics industry of the past. My molds also have a common origin: a wood box used for making brick. This has evolved to a modular system of plaster inserts that are placed inside of adjustable wood coddles. After making rough plaster molds from foam placed in the wood coddles, I carve the plaster to make convex curved forms. From this positive convex form I make another mold, giving me a concave negative. My system now includes positive (convex) and negative (concave) plaster forms that can be arranged in a variety of ways. This system provides a fluidity that is not always common when using molds and invites structured improvisation into the process.

After my tile is pressed it is left in the mold to dry to a leather-hard state overnight. If the design of the piece is going to incorporate a patterned surface, I use embossed wallpaper to transfer a thin layer of slip onto the surface of the tile when it is bone dry.

Many of my pieces have large drips of glaze on their lower edge. I use about a half inch of silica sand on my kiln shelves to catch the drips and also glue on 11/2-inch handmade terra cotta stilts to raise the tiles above the shelf. I fire all of my work to the 04-03 range in a square electric kiln, and frequently refire pieces if I am not satisfied with the initial results.

Dealing with the weight of my larger wall pieces can be challenging. To distribute weight, I attach plywood to the wall that is just smaller than the piece itself. This plywood backing has aluminum angle brackets mounted to it, and each bracket has adjustable leveling bolts that the tiles hang on. The tiles also have a lip on the back edge which prevents them from slipping forward. These backing plates are made individually to make it simple for others to install the pieces.