As you are developing skills on the potters wheel, large bellied out forms with narrow rims can be pretty challenging. Once you have the height, it is hard to belly out the form without distorting or widening the rim too much.

But this handy, cheap, and simple tool that Jim Wylder came up with can make it much easier. In today's post, an excerpt from our book Throwing Techniques, Jim explains how to use "The Rim Keeper." – Jennifer Poellot Harnetty, editor

The rim keeper fits inside the rim of a thrown cylinder and keeps it from distorting while expanding into the globe form. When the clay is being ribbed out on the right side, your forearm is against the left interior of the rim keeper. The rim keeper remains centered above the base and allows a much more aggressive push out with a rib. If this was done without the rim keeper, the rim would distort and the pot would fail. A side benefit is that the base is not being stressed by being moved and so it retains its strength and supports the form.

The angle of the cylinder wall at the base set in the beginning starts the globe's direction. As the globe expands outward, the rim moves down. If you keep the rim keeper from moving sideways, the only clay affected is the part touching the ribs on the inside and outside of the form and the remaining part of the globe maintains its form.

Once the bottom is ribbed, everything else will try to move with it. For this reason, it's best to expand the bottom third of the pot last in each cycle and not at all when finishing the rim.

Start with a black, plastic pipe fitting that's threaded on the outside and smooth on the inside, 3½ inches long, and has a 4-inch inside diameter. Cut 1¾ inch off the smooth end and ½ inch off the threaded end. Use blue tape as a guide for each cut. Discard the end cuts. The rim keeper is the middle 1-inch section that remains (figure 1). I used a table saw to make the cuts but any saw will work. Use 220-grit sandpaper to smooth the ends. 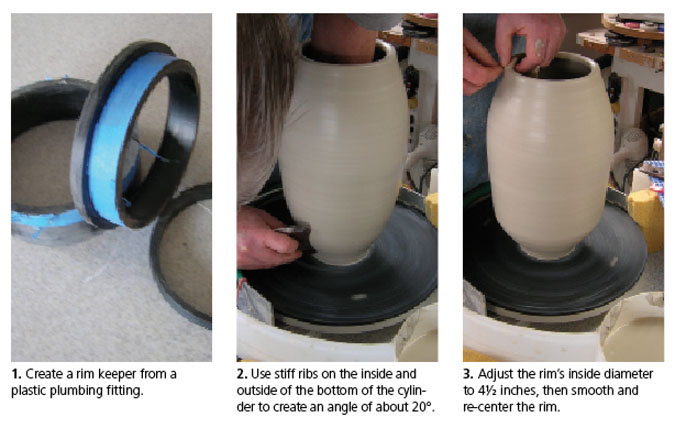 Clay preparation is important. I've used four different clays with this method including porcelain and each one had shorter or longer firming cycles and slower or faster expanding cycles. Be careful not to start with clay that's too soft.

Using a plastic bat on the wheel head, center 6–8 pounds of clay. After the clay is centered and the floor opened, stand up for the rest of the throwing. A standing position provides a mechanical advantage as your forearm will become a lever when expanding the globe.

Throw a cylinder as tall and thin as possible. Clean off the slurry from the inside and outside wall with a rib, then mop the water out of the bottom.

Use a stiff rib on the inside of the bottom of the cylinder and a stiff rib on the outside of the bottom to create an angle of about 20° (figure 2). Force the clay against the outside rib from the base inside. If your base is ½ inch thick, the angle on the outside will come up from the bottom ½ inch of the bat. This step provides a starting point of soon-to-be-firm clay that will support a globe form. Adjust the rim's inside diameter to 4½ inches then smooth and re-center the rim (figure 3). A small amount of cylinder wobble is acceptable. The cylinder will be put back on center within the first few turns after the rim keeper is in place. Let the cylinder firm up but not dry out. Heat guns and propane torches can be very troublesome, but a fan set on low while the potter's wheel is slowly spinning can be very helpful in the firming stages. 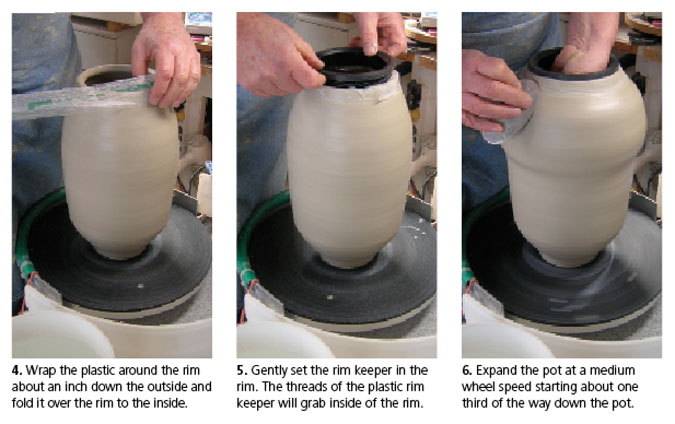 Cut a strip of thin plastic about 2 inches wide and 20 inches long. Wrap the plastic around the rim about one inch down the outside and then fold it over the rim to the inside (figure 4).

Start with one rib on the outside and one on the inside. The outside rib catches the clay pushed from the inside and lightly compresses the surface. The inside rib controls the form. Expand the pot at a medium wheel speed. Don't add water. Start about one third of the way down the pot and push the clay out from the inside. A half-inch push with the inside rib is a good place to start. Once the electrical bond between clay particles is broken with the pressure of the rib, the clay will be much more plastic. Move toward the rim, sandwiching the wall of clay between the ribs. Do this several times until the clay comes away from the bottom of the rim keeper at about a 30° angle (figure 6). This angle is what keeps the pot from collapsing and the rim keeper from shifting. You should have a barrel shape forming into a globe form.

Now begin to work your way from the center to the bottom (figure 7). Stop when it approaches a balloon form or begins to show signs of strain. Leave the rim keeper and plastic in the rim and let the form firm up. 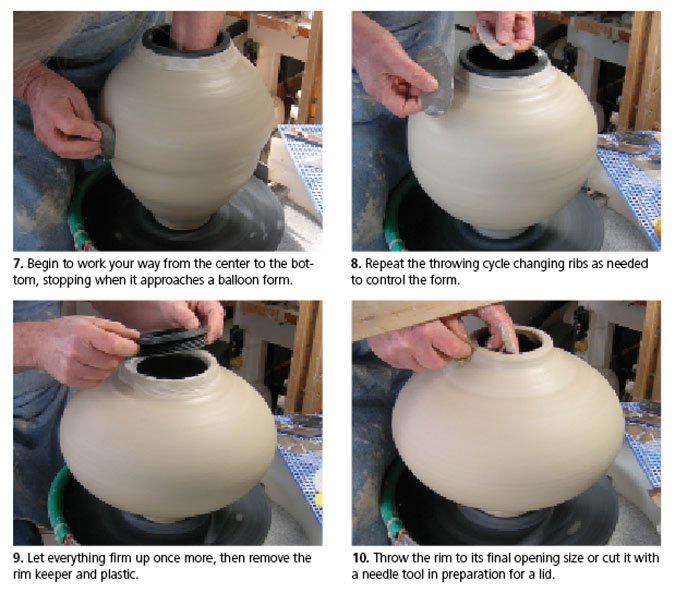 When the body of the form is completed, let everything firm up once more, then remove the rim keeper and plastic (figure 9). If the rim keeper wants to stick simply unscrew it or try holding it while spinning the pottery wheel in reverse.

Throw the rim to its final opening size or cut it with a needle tool in preparation for a lid (figure 10). You can use water when throwing the rim in the last cycle but be sparing. Water flowing on a thin wall can cause havoc very quickly. I use a homemade wooden brace to keep my stands steady when throwing taller forms.

Trim like you usually do at the leather-hard stage. A bisque chuck or Giffin Grip works well. The piece is bisque fired and my final firing is naked raku. 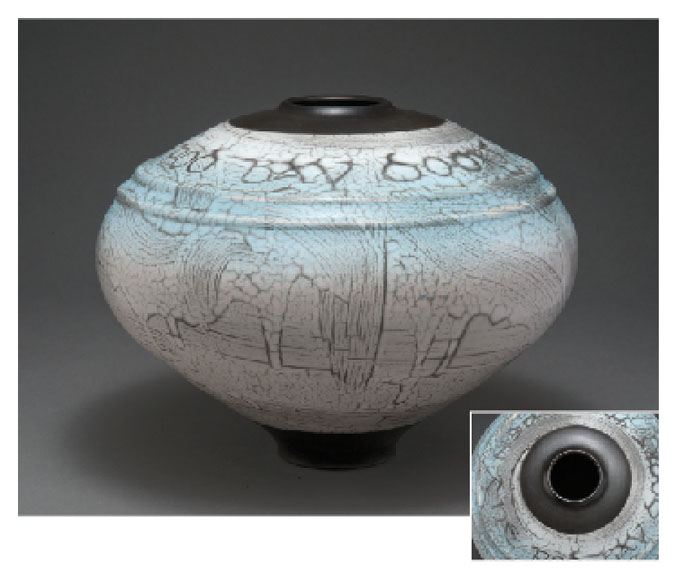 These pots take less clay, dry faster, less energy to fire, are more forgiving to handle in the greenware stage, and are very pleasant to handle after firing. The down side it that they're thin. As the thickness of the clay approaches the thickness of the glaze bad things can happen. Also, these pots dry fast and you may need to adjust your work cycle by covering them with plastic to slow them down.

The potters who have tried this method report a rewarding experience in all respects. It's fun to throw and test the limits. The clay can be expanded much farther and faster than normal because the compressed surface in combination with the rim keeper allows it to take more abuse while continuing to hold its shape.

The hardest part with this method of throwing is giving up water. The second is the time commitment. There's no way to make the clay dry faster without pausing at certain intervals for the clay to firm up before moving on. It all works, you just need to be sensitive and experiment.