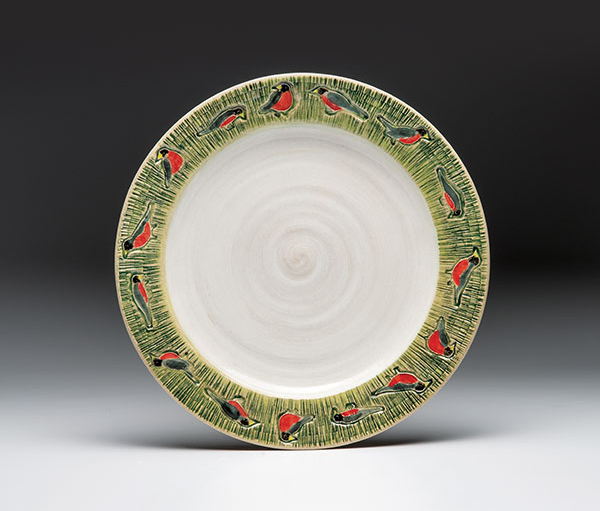 In nearly 40 years of work as a freelance modelmaker, moldmaker, and designer in the ceramic arts and industry, I’ve had numerous inquires from potters regarding molds for slip casting plates. In this article, I’ll describe two mold configurations. Then, I’ll show how and why I developed a unique system for my own personal use.

First, I want to acknowledge that there are intrinsic difficulties in slip casting plates, which is why it’s rarely done in industry. (In dinnerware factories, plates are typically made in jiggering or pressing operations.)

So, despite the problematical nature of the process (as described below), why might a studio potter want to slip cast plates?

Whatever the reason, there are two ways that one can slip cast plates: drain-cast molds and solid-cast molds. 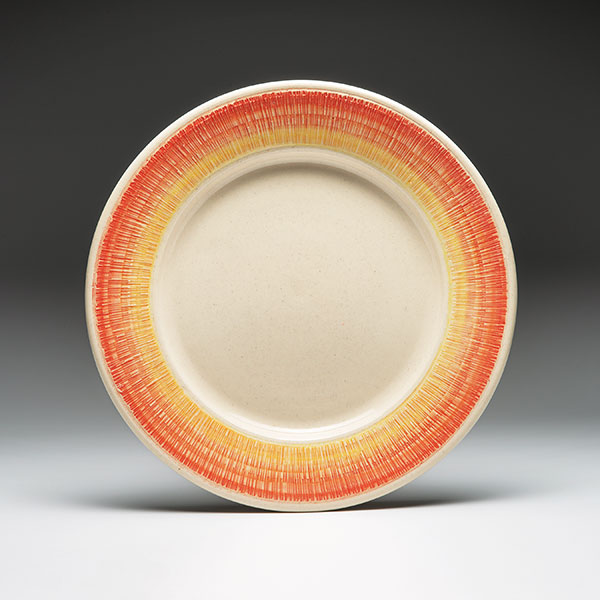 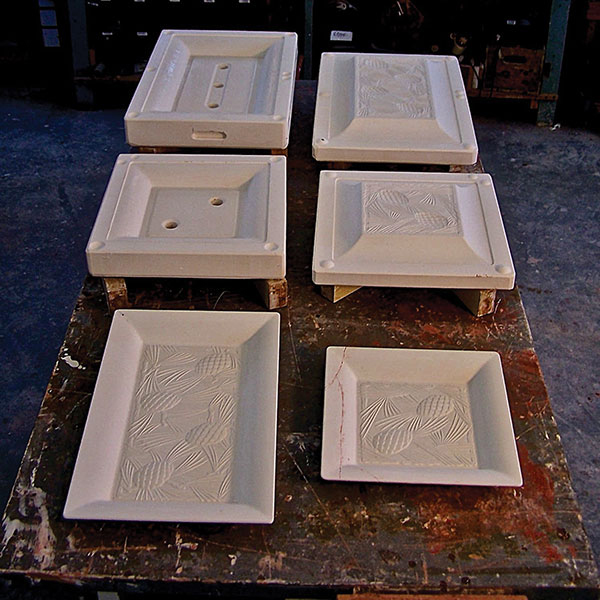 With the drain-cast mold design, a plate is made in a one-part, open mold, which forms the back of the plate (see 5). It’s a typical drain-cast operation—the mold is filled with slip, allowed time to cast, and then tipped up and drained, leaving a cast piece behind. When leather hard, the reservoir (also called the spare) is trimmed and removed, and the cast is removed from the mold when ready by placing a board on top of the mold and flipping it over so the plate then drops out and rests on the board.

5–8 Slip is poured from above and fills the open, crosshatched areas depicted in the illustrations. The thicker black lines represent the clay building up on the casting face of the mold to form the plate, foot, and spare.

Here are some pros and cons of this type of plate-mold design and casting technique. 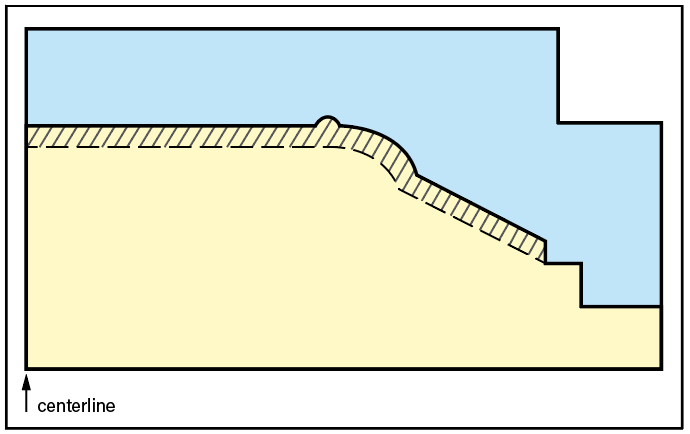 Here the plate is cast by filling the space between two interlocking mold parts, one for the face and one for the back (see 6–8). The slip builds up from both sides, until they meet and form a solid wall.

In designing a solid-cast mold, an important consideration is how the slip will be introduced when filling the mold. There are two alternatives:

Finally, there’s an edge-feed two-part mold. The mold stands up on end, and the slip is fed in through the edge of the plate. I don’t like this system, but it works in certain cases.

Note: Although I refer to turnings or shapes made on the wheel, everything above applies to non-round shapes as well. 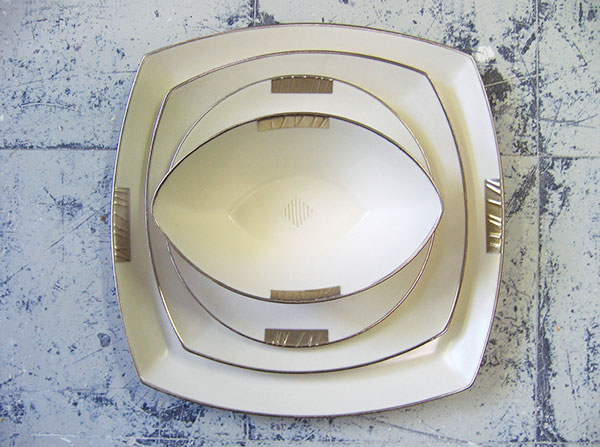 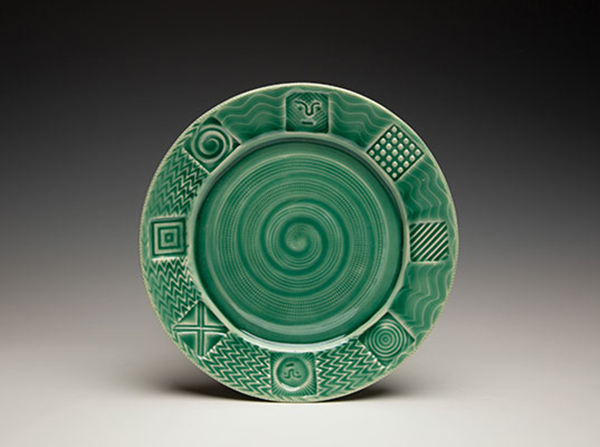 My own journey in plate making began in junior high school shop class, when I draped a slab over a form (to make a spoon rest that my mother used for the rest of her life). Throughout my undergraduate and graduate ceramics education, and in the ensuing years, I liked to make plate forms, both thrown and slab built, as a canvas for quirky, personal drawings, paintings, and relief sculpting. Over time, however, I came to feel that, for me, ceramics wasn’t the best venue for working out such imagery, and turned to printmaking and drawing for that kind of expression. I gradually moved away from the fine-art side of ceramics and toward making more functional ware, as my personal work became informed by a career in the dinnerware industry.

Early on, when I was making heavy sculptural plates, I draped slabs in simple bisque molds. I turned big, hollow, fired-clay domes with fair curves inside and out, which could be used either to drape slabs into the hollow or over the dome. (I recommend this as a useful tool that can be made by any potter.) As I became more adept in plaster work and my studio became more devoted to modelmaking and moldmaking, I began to slip cast more of my own work. Eventually I developed a hybrid system for casting plates in a mold, while retaining some elements of throwing. 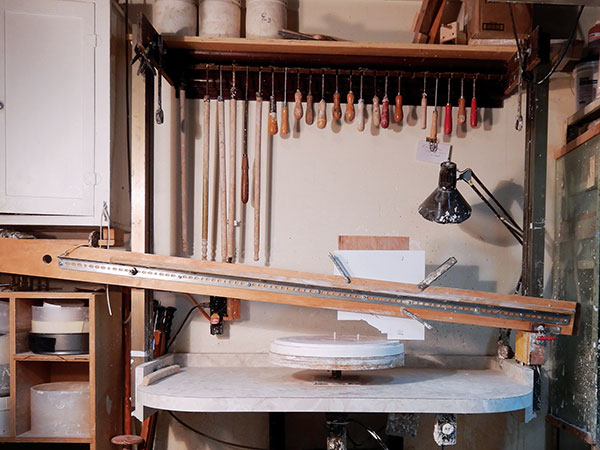 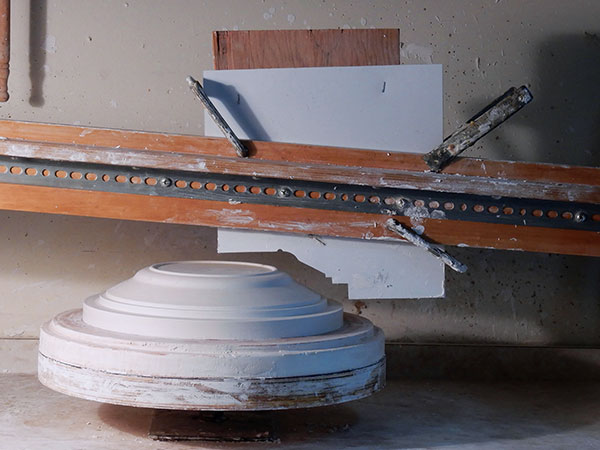 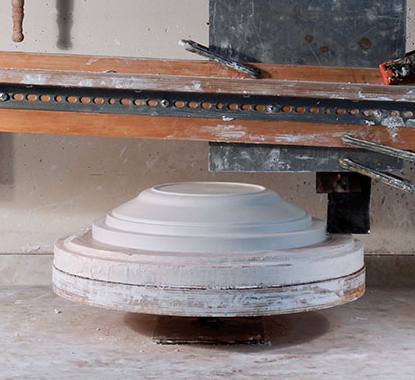 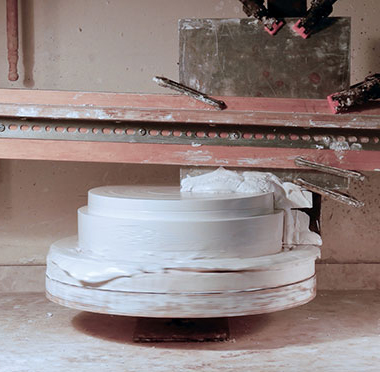 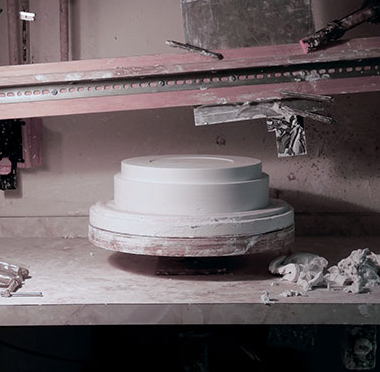 To make my open-cast plate molds, I first design the cross-section of the plate on paper (yes, I still draw “old-school” with a drafting table and a pencil). Based on the drawing, I make a styrene template, set it up on my plaster wheel, and turn a solid plaster model. Then, with the model still on the plaster wheel, I pour the one-piece mold and turn the outside of the mold so that it is perfectly concentric with the inside. On the back the mold, I form a short cylinder that fits in a Giffin Grip so that I can secure and center the mold on the wheel later to refine and decorate the plate surface (see 12–16).

I use the same molds with either draped slabs or casting slip. With slip, however, I believe the plates are less prone to warpage, and I like working on the smooth, leather-hard slip. I developed a procedure in which I drain-cast the piece, then place the mold on the Giffin Grip. Since the outside of the mold is concentric with the inside, the plate spins true, as in a jigger mold. I then throw the face of the plate by hand—compressing and ribbing the piece to eliminate any trace of the foot ring on the face, and refine the form. This is also a way to clean up any little defects from the draining of the slip (if, like me, your slip is not always perfect). In a sense, it’s a bit like jiggering without the jigger arm. I also throw the interiors of slip-cast-molded deep bowl forms the same way, which would be impossible to do with slabs (see 13–19). 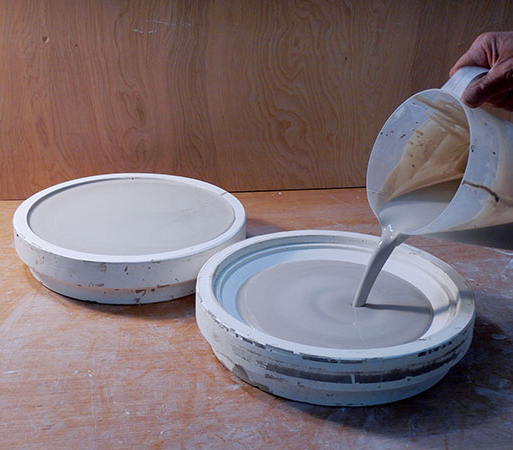 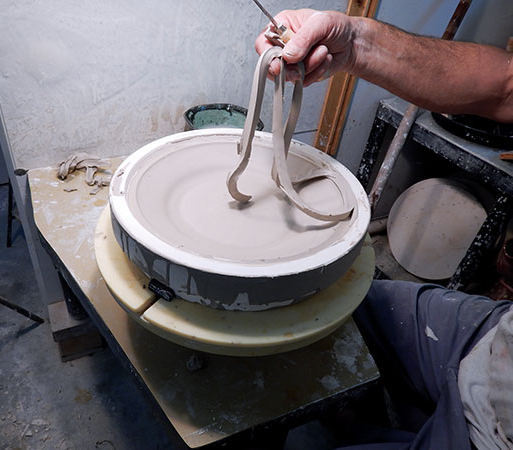 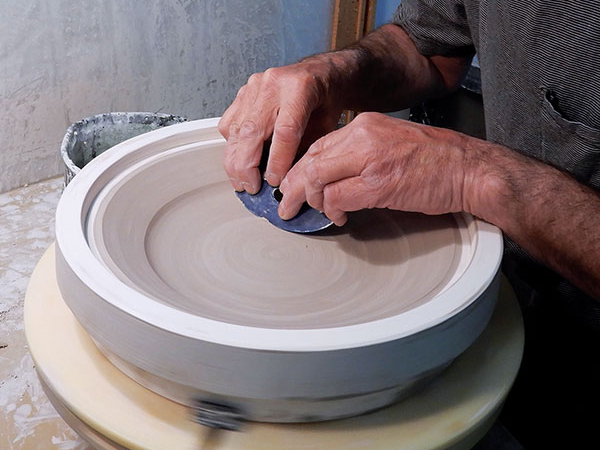 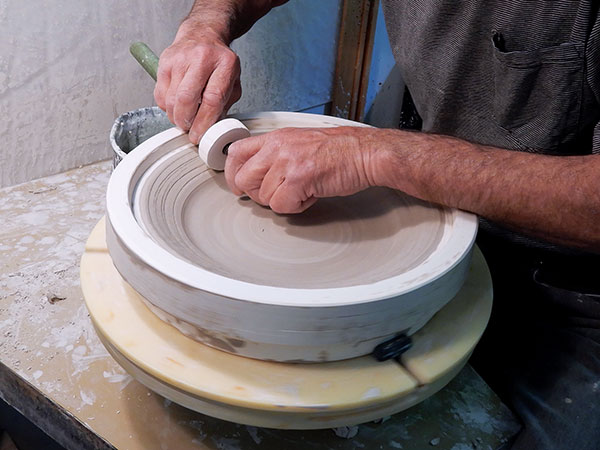 The same molds and procedure work with plastic clay. To minimize warpage from the clay’s forming memory, I pound out a slab roughly by hand and then use a slab roller just to finish it off. Then I cut a disk about the size of the plate, lay it on the mold, and throw the plate inside the mold, the same as I do with the cast plates. (I’m amused to imagine a potter puzzled by the finished plate—the back is obviously molded, but has the canvas slab-roller texture, while the face of the plate clearly looks thrown.) By the way, I also have made and used similar concentric hump molds that mount on the wheel to make plates face down.

With either slip or slabs, after this wheel work comes the fun part—decorating the leather-hard piece (still in the mold) with various textures, combing, etc., and then impressing imagery with handmade plaster roulettes and stamps. For me, this way of making plates combines the efficiency of mold-forming with the opportunities of hand finishing (see 20–22). 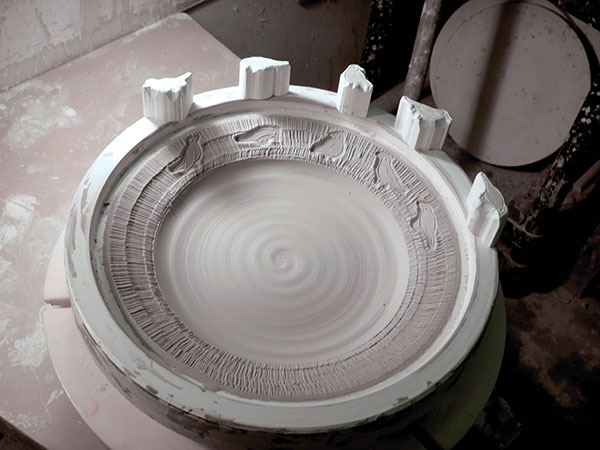 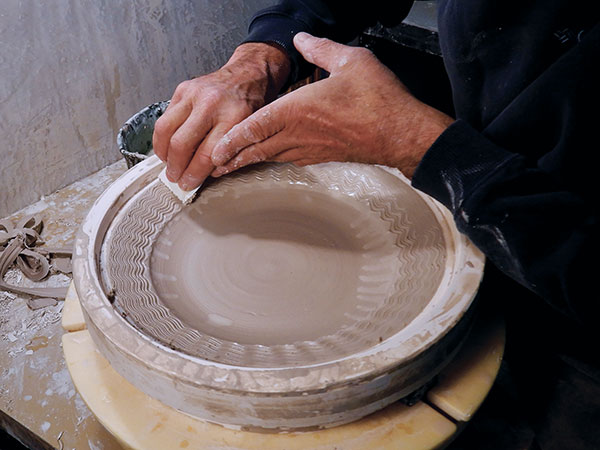 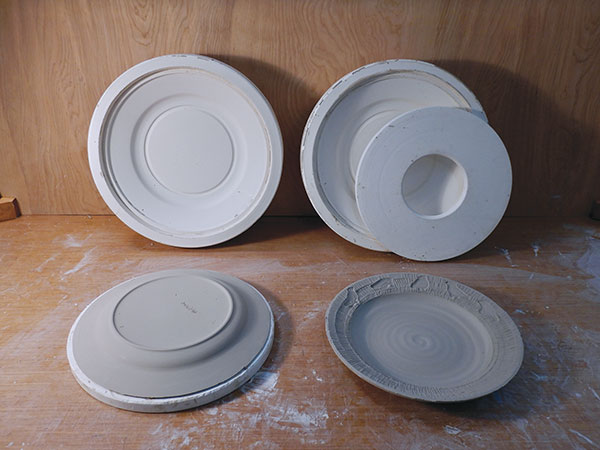 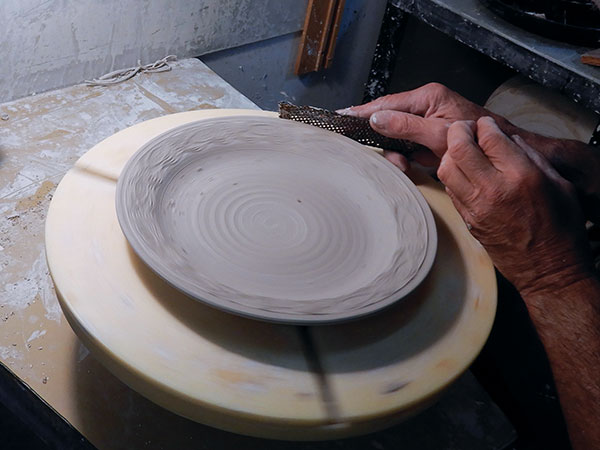 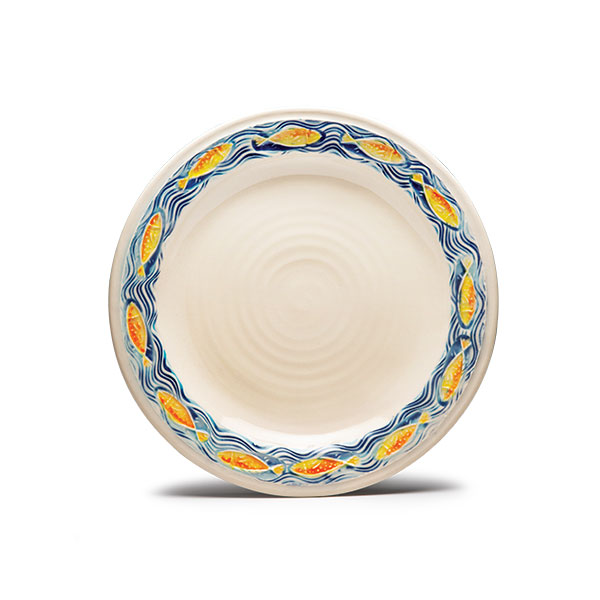 I think that what you make and how you make it reflect every aspect of your life. This system works well for me because of my particular skill set and my unique studio, which is primarily a professional plaster model/mold shop. Pottery making is an artistic activity that I pursue out of a lifelong fascination with the materials, process, history, traditions, and design challenges of ceramics. My personal goal is not to manufacture product, but to develop ideas and pursue a practice that, I hope, occasionally approaches perfection.