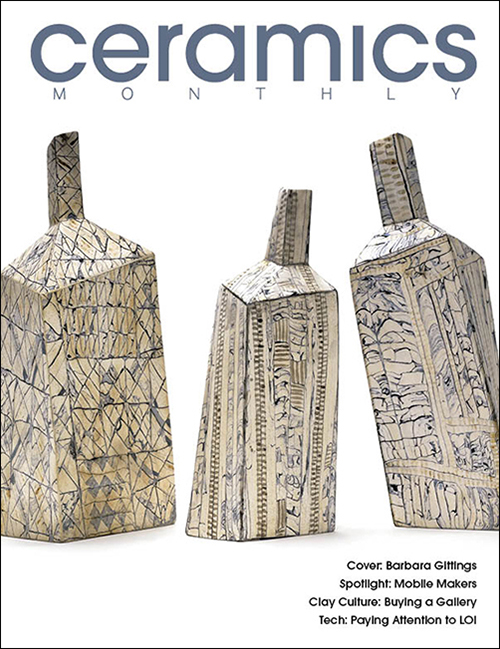 Robert Harrison’s recent work operates on several fronts simultaneously. While he is known as a ceramic artist, his current work takes an assemblagist’s approach to its logical conclusion with large-scale, site-specific architectural sculptures made of welded wire-mesh forms filled with reclaimed and recycled brick, stoneware, and porcelain. Harrison evolved this approach after seeing countless ranches across Montana use old fence wire filled with fieldstone as a counterweight to demarcate property boundaries and anchor long stretches of barbed wire. 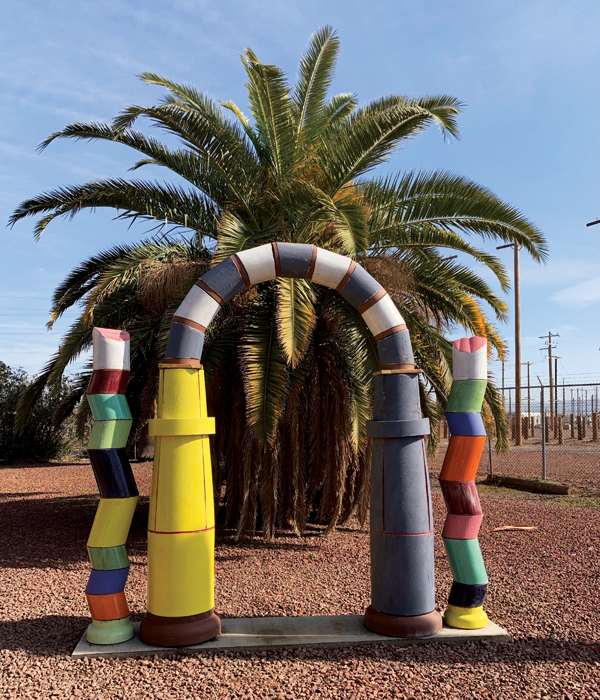 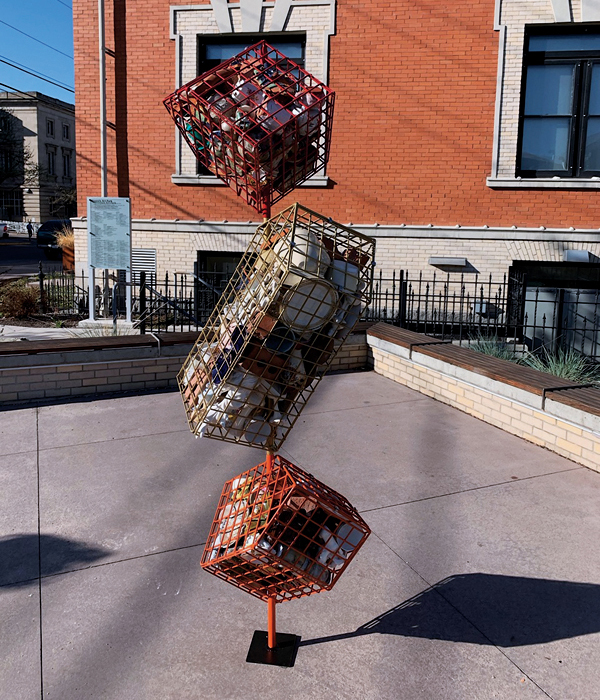 The Expression of Ceramics

In some ways, Harrison’s sculptures resemble folk assemblage—those encrusted forms comprised of buttons or bottle caps—except Harrison’s are made from found, altered, or manufactured ceramics. Assemblage is a purposeful arrangement made with a specific selection of materials. This is exactly what Harrison does. However, he restricts himself to ceramic media, drawing from all the types (earthenware, stoneware, porcelain) and disparate uses of the medium—industrial and utilitarian pipe and culvert, architectural tile and brick, functional craft, tourist curios, memorabilia, and sculptural elements. Harrison has built a distinctive career through this inclusive approach, which broadens the expression of the medium while reinterpreting its history and recentering its future.

For Harrison, the idea of a container to be filled with his favorite material appealed to him. Each one of his mesh containers holds a unique combination of ceramic—and by extension, cultural information—and represents a continuum of the history of ceramics with surprising juxtapositions that bridge time and place. Harrison has used this approach for the last two decades, first as stacks, then arches and columns, and most recently with his archetypal house forms. 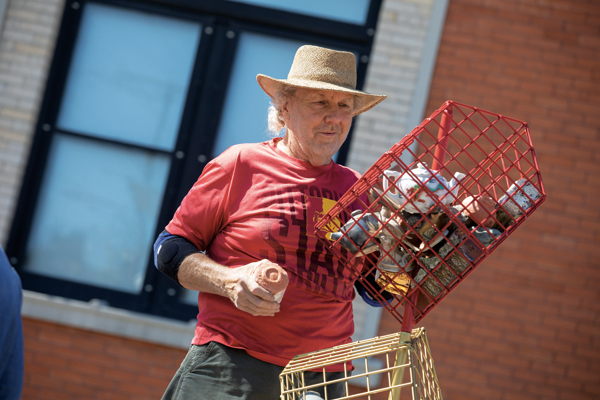 Harrison’s large-scale sculptures aren’t portable, per se, but require the artist to set up and fill the interiors every time they are collected or displayed, resulting in site-specific iterations. When full, these columns or houses can weigh upwards of several hundred pounds, necessitating their dismantling and recreation every time they are exhibited or sold. Often, their location and the composition of their fill is specific to the place, even though the ubiquity of manufactured consumer items means that similar objects can be found, arguably, in every thrift store across America, wherever its location. He loves to use local material, as much to comment on the specific permutations of this global consumption and trade as to solve the practical concern of moving dense or fragile boxes of brick or ceramic.

Harrison is unabashedly in love with ceramics—architectural ceramics in particular—and has adopted tile, columns, archways, and chimney stacks, as well as barn or house forms. When looking at his work, it is possible to even feel a world where ceramics reigns supreme—its presence responsible for determining fashionable style, prestige, wealth, and avenues of global trade, akin to the story recounted in Janet Gleeson’s The Arcanum: The Extraordinary True Story, which focused on the development of European, specifically German, porcelain. 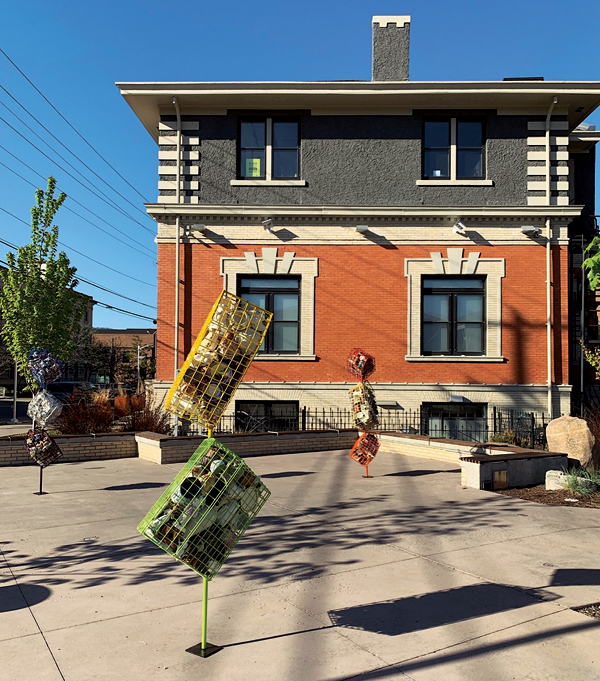 Originally from Winnipeg, Manitoba, in Canada, and now a dual US/Canadian citizen, Harrison made his way to the American West in the late 1970s to pursue an MFA at the University of Denver, in Colorado, followed by a role as assistant professor and head of ceramics at Gonzaga University in Spokane, Washington, in 1982. It was during his residency at the Archie Bray Foundation for the Ceramic Arts in the mid-1980s that he synthesized his approach to ceramic installation and site, creating the ambitious and distinctive Tilex (1985) as an outgrowth of his graduate work.

Harrison is internationally known in the clay community for being at the forefront of radical change within the ceramic community. Author of Sustainable Ceramics: A Practical Guide and key organizer on the National Council on Education for the Ceramic Arts (NCECA) Green Task Force, Harrison represents a shifting perspective that challenges the medium’s extractive history and encourages its long-term sustainability. His mining of thrift stores, refuse brick piles, and industrial yards is only one of the ways Harrison envisions lessening the carbon footprint and environmental impact of studio-ceramics practices. 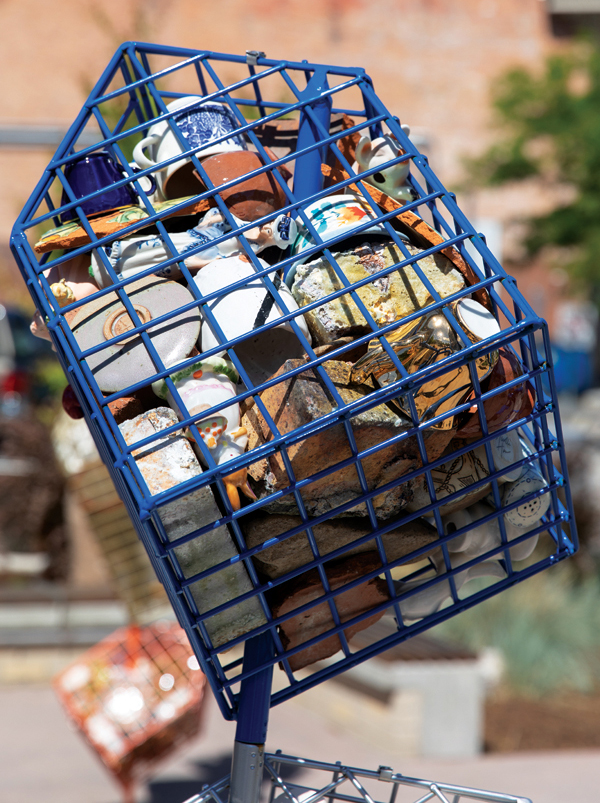 However, the whole question of recycling ceramic material is inherently complicated and often creates more questions than answers. Regrettably, individual artists are not able to significantly impact supply chain considerations of industrial scale at this time. For instance, H.C. Spinks, manufacturer of C&C Ball Clay, estimates the vast majority of their sales support industrial applications and commercial interests, with artists’ consumption making up a scant 1–3%. Sustainability, then, for ceramic artists must take other forms—reduction (firing only those pieces that meet quality guidelines), reuse (expanding beyond single use), reclamation (collecting and re-milling clay material), and introducing efficiencies (better insulated kilns, water catches, solar energy) into studio practice. 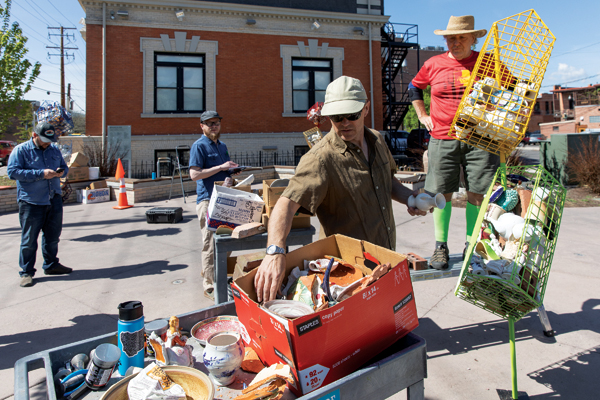 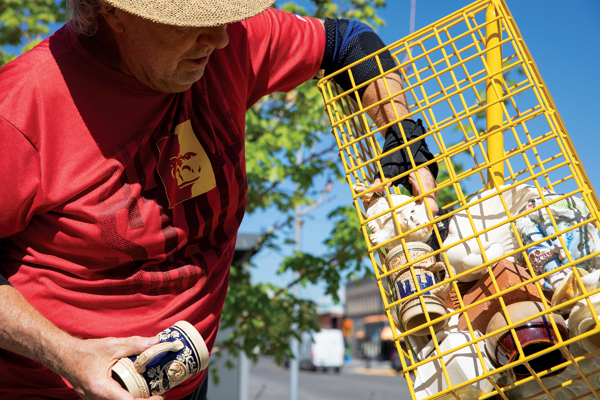 Harrison is responsible for starting these conversations about sustainability, even while only having some of the solutions. His work inherently compels the viewer to question sustainability, in part because the experience of seeing such a vast and disparate array of ceramic pieces concentrated together is jarring. When held up against extraction and sustainability, each person has a shared responsibility to make sure we are not consuming more than we need to, a concept that extends to ceramics as well. Ceramics, Harrison argues, stands counter to consumption culture, paradoxically even while introducing more stuff to buy. He argues, reasonably, that every time a cup is used, whether used for function or like he does, as sculpture, it decreases that cup’s overall environmental impact and extends its useful life. Even as pieces break from reuse, Harrison artfully incorporates shards—a tasteful porcelain head here, a half plate there. If a cup is used thousands of times, the question of energy consumption during firing, carbon emissions, or mining clay or glaze material gets offset and minimized (though not obliterated) by this long-term-use value. 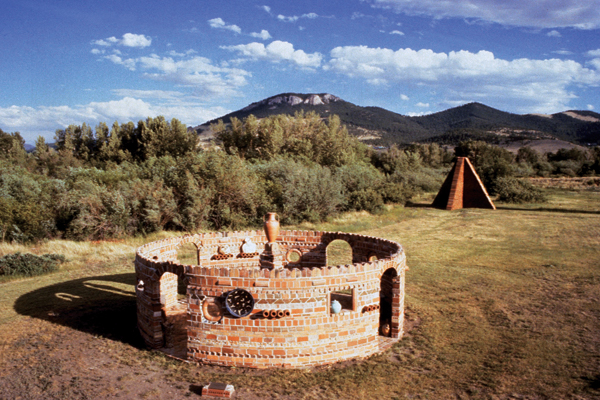 It Takes a Village

Recently, Harrison exhibited new work at the Missoula Art Museum in an exhibition titled “It Takes a Village.” Harrison created four stacks of houses that were installed in the Missoula Art Park surrounding the museum. The exhibition was particularly suited to the circumstance of the pandemic. The accumulation of house forms in It Takes a Village suggests a community, giving voice to the adage that celebrates collective care and action. The second half of the proverb suggested by the title is “…to raise a child,” but Harrison’s approach has been expanded to achieve any meaningful change in the world.

Harrison’s assemblage pieces and site-specific installations—with their ceramic shards, found knickknacks, or contributed tchotchkes—embody the postmodern tenants of appropriation, juxtaposition, recontextualization, globalization, and hybridity. Pieces of brick from the Archie Bray Foundation for the Ceramic Arts in Helena are nestled against Hummel figurines, Noritake ware next to functional ware by Missoula ceramic artists Nicolle Hamm, Donna Flanery, Elisha Harteis, and others. In one corner, a slip-cast green stegosaurus left over from someone’s paint-your-own-pottery project confronts a knock-off 19th-century Chinese rose medallion plate, while a headless collectible cowboy figurine cheers them on. This scene is framed by a piece of shattered terra-cotta planter with a royal blue glaze and kiln brick accented with a glassy green sodium accretion. Part of the fun is the finding and reveling in the surprising relationships between items like faux Imari ware, gold-lustered teacups, Fiestaware, reproduction Meissen and Eberlein figures, a turquoise blue head belonging to a mass-produced Buddha. 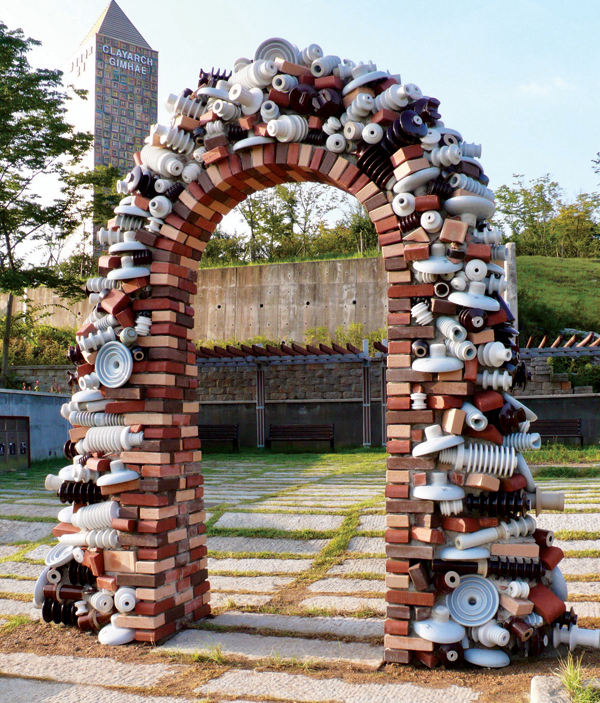 In postmodernism, cultural traditions, spiritualities, ideas, and identities worldwide are collapsed or are turned, somewhat dispassionately, into commodities or entertainment, creating a façade (or simulacra) of multiculturalism. According to philosopher Jean Baudrillard, simulacra (plural of simulacrum) erase distinctions between image and reality, so that it becomes impossible to tell a reproduction from its original. With the idea of a global village—or globalization in general—the dangerous allure of unchecked pluralism is that it can reinforce oppressive and unjust structures of power. The concept of the global village in Harrison’s work points to the need for a multiculturalism based on shared power and opportunity, not just access to “ethnic” food, “cultural” experiences, or cheap (ceramic) goods. Harrison suggests that our collective interest and work can have an impact and make the world a better place.

Harrison, however, imbues his postmodern ceramics with warmth and character, and that is what makes his work so satisfying. There is a generosity and a common appeal his work. The fact that the sculptures are made from such familiar materials put together in such familiar ways helps us feel as if we know or understand his work, even when the collective purpose remains mysterious. When viewers interact with Harrison’s work, they become aware of the seemingly insatiable appetite that humanity has for ceramics. The viewer is conscious of the materiality of clay and, by degrees, how it infiltrates people’s lives. He has delved into this great project with all the enthusiasm of someone who knows his course and is sticking to it.