Appears in the September 2022 issue of Ceramics Monthly. 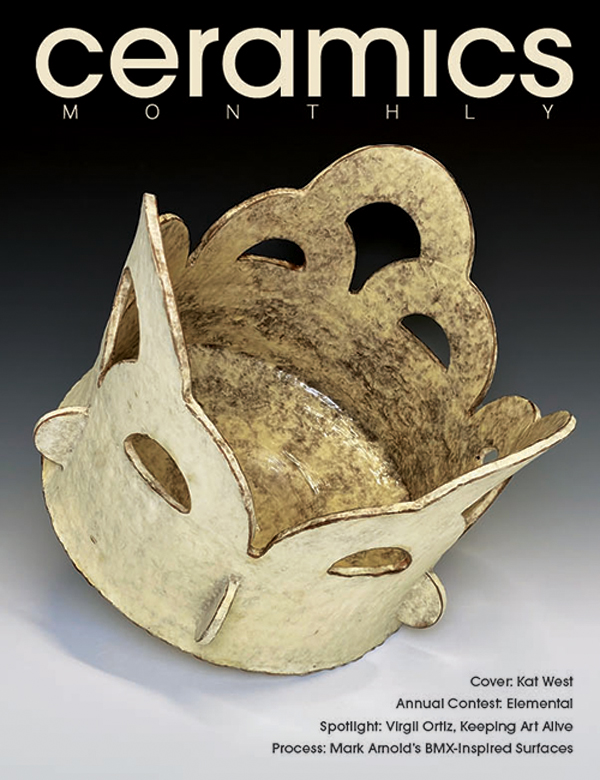 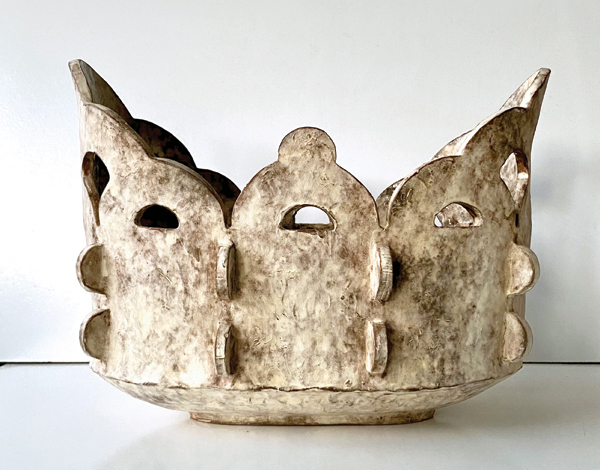 From a young age, Kat West saw her life’s path leading her to become either a healer or an artist. Today, she knows she doesn’t have to choose. Both ways of life were modeled in her family of origin. On her paternal side, there were several doctors, including her grandmother, Avelina Alcantara, who was one of the few female physicians in the Philippines in the 1940s. The maternal side of West’s family was rich with artistic energy: her grandfather, Elias Ambing, was an oil painter; and her mother, Lora, was a toy designer. Currently working as a certified nursing assistant in Orange County, California, West is back in school pursuing her lifelong dream of becoming a nurse, a decision prompted by the question, “In 20 years, what will I be happy that I have done or provided for the people in my life?”

West first entered nursing school in her 20s, hoping to follow in her grandmother’s footsteps, but a pregnancy put that career path on hold. When West’s children were young, she wanted to be at home with them. Now that they’re in high school, the time feels right to return to the path she started years ago. Currently in her 40s, West is more eager than ever to be part of a healing community, and feels she can bring the richness of her life and care-giving experience to bear in her nursing career. 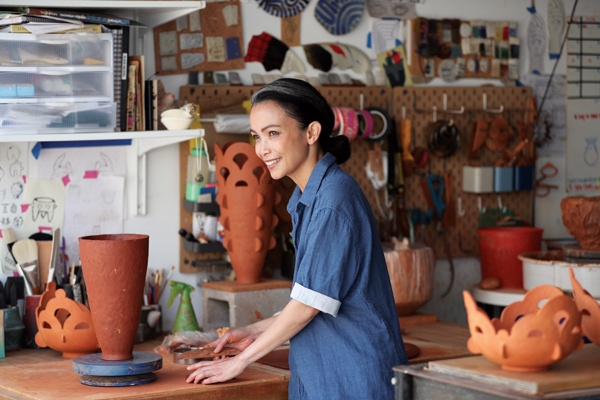 Clay as a Vehicle for Self-Healing

Relocating with her family to her husband’s native Orange County, near Newport Beach, California, in 2009 was difficult for West, and left her feeling displaced. But as a Third Culture identifier—someone raised in a culture other than their parents’ or their own country of origin—she is familiar with the feeling of displacement. Her family emigrated to the US from the Philippines when West was eight years old and settled in Brooklyn, New York. Both her parents were working so hard, West explains, that they didn’t have time to talk about what their original culture really meant to their identities here in a different country. Again as a new resident of California, West found herself wondering who she was in this phase of her life. These questions of identity and belonging would go on to influence her explorations with clay.

West’s husband, John, a glassblower who previously worked with clay, gave her a gift certificate for a class at Aardvark Clay in Santa Ana. “Finding clay was like finding a new friend,” West says, and it soon became a vehicle for self-healing. She says those early experiences in learning a new skill set were serendipitous in helping her discover a new sense of self. “It was so different from working with fabric,” she shares, referring to her work in the fashion industry earlier in her life. And she liked getting her hands dirty. “With fashion, I can draft a pattern and have a garment ready by the end of the day. Clay is really different.” It requires different things from us at different stages and, unlike sewing or drawing, clay can’t be left for too long without our attention. “Something can go wrong at any stage of the process,” remarks West. It felt to her like clay was asking her to practice patience, humility, perseverance, and acceptance, and to translate those qualities to her life outside the studio. 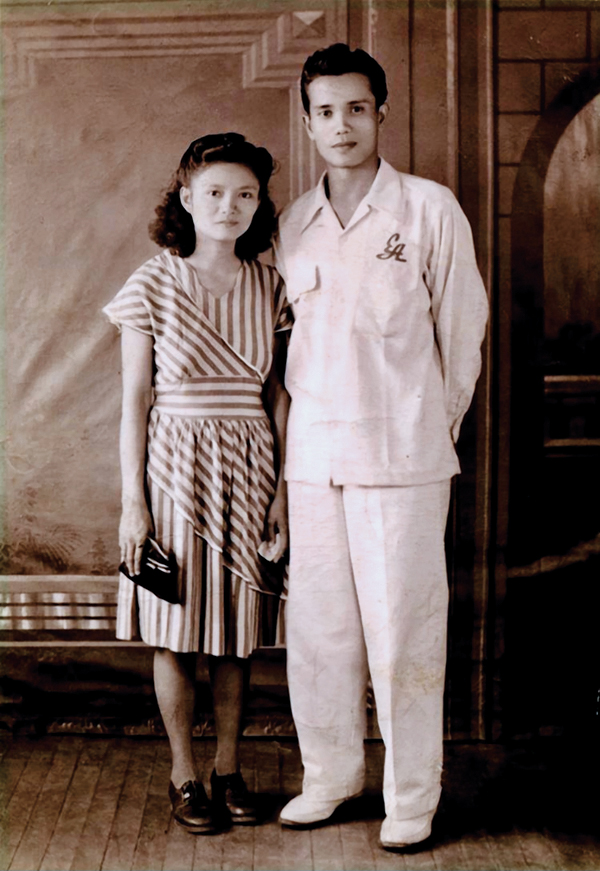 West continued to take classes at Aardvark Clay for a few years. Trudi Howell became her mentor there, teaching her early on that “there are no rules in clay.” West said she latched on to this idea. Initially thinking she had to build all her vessels entirely from coils, she now feels free to integrate several construction techniques when making a piece—wheel-thrown components for the pedestal bases, coils for the midsections, and slab parts for the lattice designs that adorn most of the rims of her functional, sculptural vessels.

In the long term, West wanted to be able to work at home. So, she and her husband built a studio in the garage. It was important for West that studio time not interfere with family time. She shares that her mother was a career mom and wasn’t around as much as West would have liked. This affected her deeply, and she was determined to do things differently. So, when her kids were in school, West would work in the studio and then be there when they got home.

Early in her ceramics career, West participated in craft fairs and flea market sales, but her goal was never to make a business out of her ceramics. “Making a lot of work really fast just to sell it didn’t feel like the kind of outlet that I intended or wanted,” she says. Though she enjoyed the communal aspect of selling in those settings, her main concern was being able to make work that reflected a spirit of self-reflection. During the pandemic, West spent many hours in the studio, diving into what her practice truly means and doing a lot of soul-searching. 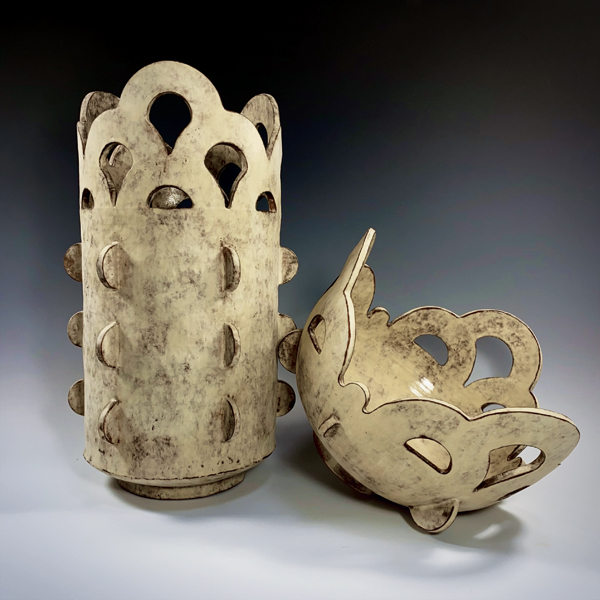 At the same time, her work started to get a great deal of exposure when an image of her pedestal bowl appeared in the April 2021 issue of Elle Décor magazine. This led to her work getting picked up by The Artling, an online gallery that showcases a curated selection of art from some of the world’s best galleries and artists. Virtual opportunities like the one she has with The Artling allow her to post work once it’s complete, without the pressure to rapidly produce dozens of pieces for a show, and the venue has also been a good one for sales. Feeling fortunate that she doesn’t need to rely on the income to stay financially secure, West decided to donate a percentage of her profits to various social-justice causes. “As the mom of two biracial kids, we talk all the time about the big issues. We talk a lot about fairness, about what we can do as individuals to make things better.”

Connecting to Her Ancestry

West believes in the concept of “karmic realignment,” which she describes as a desire to fulfill a generational connection. She says she has always wanted to feel like she belongs to her Filipino culture beyond just speaking the language and cooking the foods. In 2015, West returned to the Philippines with her brother, Carlo, for the first time in 30 years. “It was like a pilgrimage,” she notes. “There was a lot of crying and healing.” 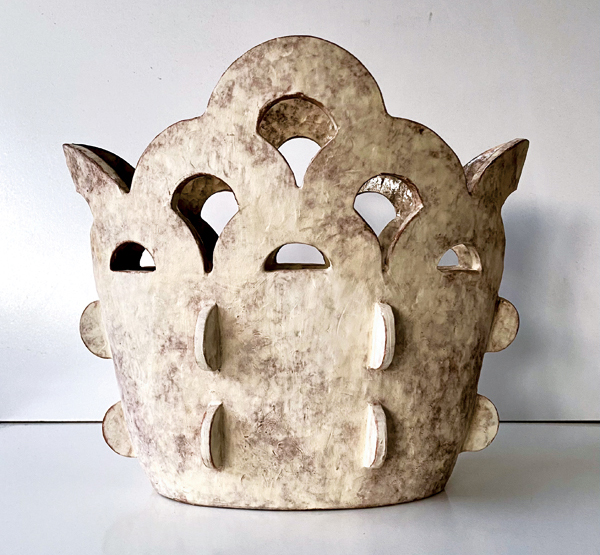 While working in her studio, she often thinks of her grandfather and the way that he always continued to paint no matter what his struggles were. She thinks of her maternal grandmother, who had 10 children, and what it meant for her to serve her family out of love. And she thinks of her father’s mother who was a World War II guerrilla doctor, smuggling letters and weapons to American soldiers. “My role models are such incredible people. So why do I feel so separate from them?” she finds herself asking. These questions of identity and belonging remain at the heart of West’s ceramic explorations. Her time spent working in clay is a lifelong attempt to bridge those connections in the hopes of achieving what she refers to as “generational belonging.”

West’s paternal grandmother home birthed her in the government community of Bilibid, which housed a large penitentiary where the inmates created handmade wooden furniture like the commonly known peacock chair. Influenced by treasured handmade objects in her early years, such as her grandmother’s bed with its hand-carved roses on the frame, and a crib that has been passed down through generations, West wants to create objects that could be considered heirlooms for future generations. The distinctive lattice designs that adorn most of West’s work reference traditional furniture, basketry, and old architecture of the Philippines. West says the lattice work just started showing up, and wasn’t intentional, reflecting the profound effect of her early life in the Philippines. 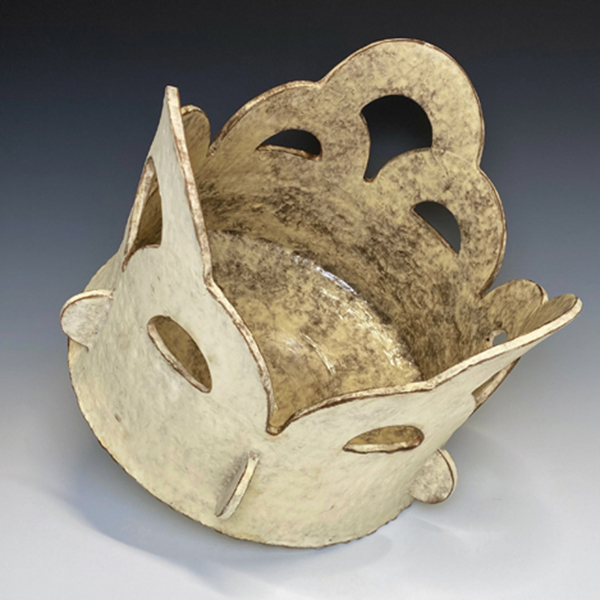 Red clay felt like the right clay to help achieve her goals of making work that appears weathered, yet modern, and she made the switch from B Mix to a mid-range red earthenware three years ago. Her intent is that the work seem patinaed by decades of touch and use. Never liking the look of glossy glazes, West turned to terra sigillata to enliven her surfaces. She decorates with a white terra sigillata, sometimes mixed with titanium dioxide to produce a warmer, antique white. She wants to keep the surface simple so the forms can be showcased. A commercial clear glaze from Aardvark lines the interiors of functional forms. She waters down the same glaze to use sparingly over select areas, creating a polished effect.

West gives each vessel a name, like Warrior Queen and Heritage Bowl as a way to imbue it with a sense of identity. She says her Warrior Queen bowls are an homage to a group of moms in her life who lift each other up. Her intention is to honor these women by saying, “I see you and what you go through.” A bowl as a functional piece is an offering. “What am I handing down to you?” she asks. “Is heritage something you learn or inherit through objects?” 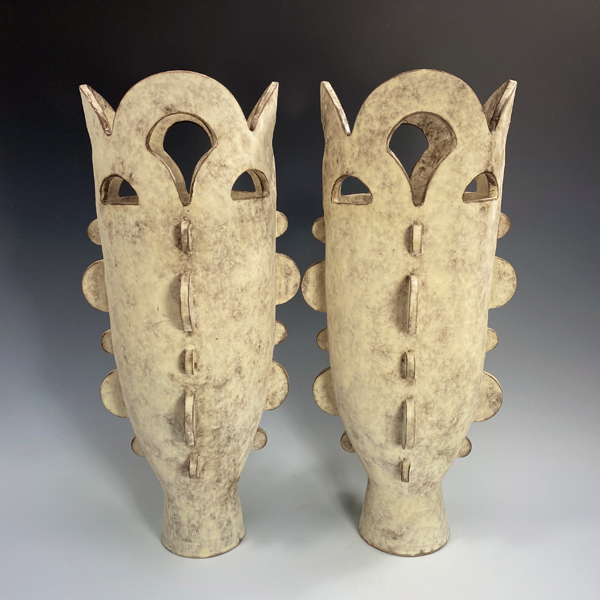 Not Having to Choose

“I feel like a tree trying to continually branch out and grow new leaves,” reflects West, “whether artistically trying to heal myself, or literally trying to heal other people as a nurse.” As she gets further immersed in her studies, West’s studio practice has inevitably changed. These days, instead of five days a week for six hours, she works in the studio three days a week for a couple hours at a time. “It’s more of an escape now,” she says. She plans to continue her clay work even after she becomes a nurse. “Why do I have to choose?” she asks herself, adding, “Would that mean I’d have to choose between being a mom and being a nurse?” She concludes, “If I need clay, why can’t it continue to be a part of my life?”

the author Susan McHenry is a studio potter, writer, and educator based in Kalamazoo, Michigan. She has an MFA in writing and literature from Bennington College. To learn more about her work, visit emptyvesselpottery.com or follow on Instagram @emptyvesselpottery.