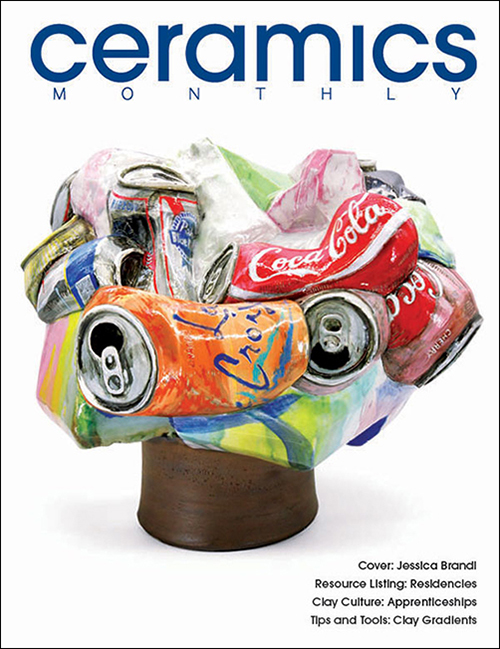 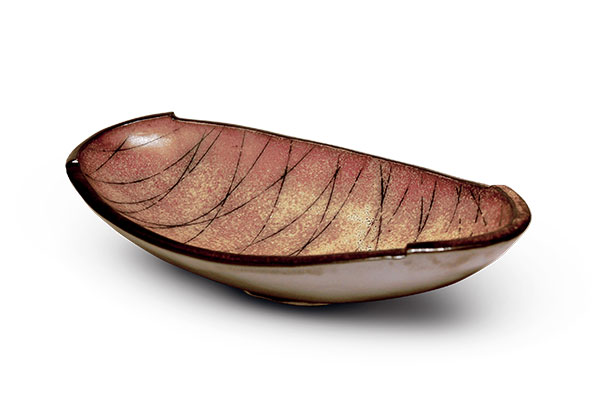 Effects of chance mingle congenially with a low-key technical finesse, producing a subtle complementarity between the impression of natural processes and the evidence of a guiding influence that knows precisely when to intervene and when to exercise restraint. The result in the salt-glazed vessels of veteran Wisconsin potter Karl Borgeson is a deceptively simple formal serenity, an ostensibly effortless harmony between the meanderings of happenstance and the carefully inscribed hallmarks of an aesthetic. The warm orange of reduction-fired porcelain textured by an irregular accumulation of golden wood ash coalesces placidly with thin, linear, geometric patterns of iron-rich slip. Pale green glaze, appearing incidental in its quiet variance of tone and hue, seems to accrete on some hand-modeled surfaces as a matter of history and material inclination, like verdigris on ancient bronze. However, not all is as it appears in these traces of processes. Behind the scenes, work—rather than nature or serendipity—is the primary cause of effects. 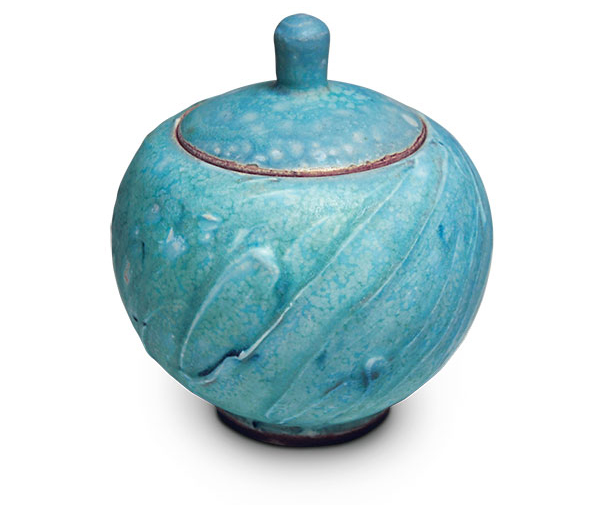 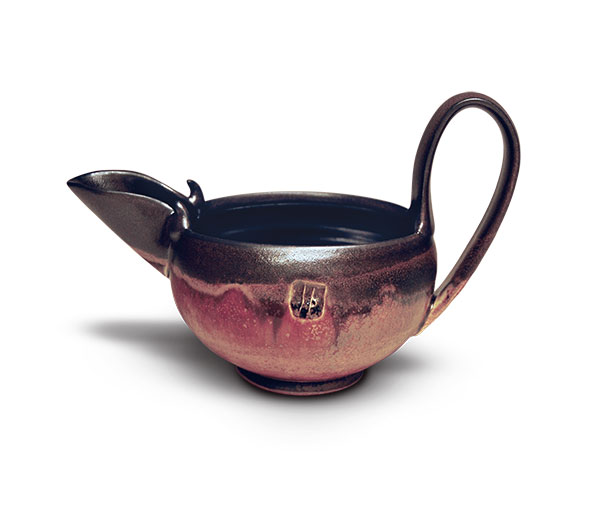 A Devotion to Ceramic Exploration

That art is a product of work must have occurred early to Borgeson, who as a child watched his Swedish-immigrant parents build their own home in St. Paul, Minnesota, and then outfit it and themselves with handmade furniture and clothing. Acknowledging the link between work and the work—labor and the aesthetic product of that labor—Borgeson chose an entree to art in design, which he began studying at St. Cloud University in 1962. There, the manual skills he had acquired in his father’s basement workshop were transferred for the first time to clay. “They had a required course called Hand Building for Teachers,” he recalls. “I took that, and that was it: I loved the material.” After graduation and a few years in the work force, in 1967 Borgeson enrolled in the MFA program at the University of Minnesota to study with Warren MacKenzie and Curtis Hoard. As a graduate student, he devoted himself chiefly to exploration of low-fire glazes on gas-reduction, high-fired stoneware. Years later, as a professor of art at the University of Wisconsin–Whitewater, much of his production would be raku ware glazed with a blend of those same low-fire commercial glazes and his own underglaze formulas. 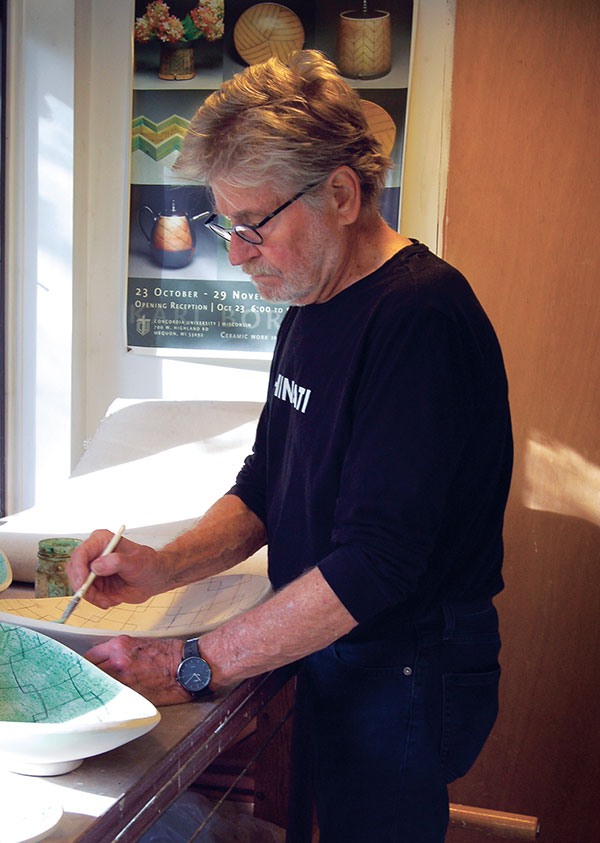 The raku work, which confirmed the potential of chance to complement the effects of control in art, was non-utilitarian. “That was the era of the non-functional pot,” Borgeson remembers. “I made hundreds of non-functional bowls and platters. It was unbelievable how people were buying that kind of work, but I got to a point where I felt that I was repeating myself. That’s when I started thinking that wood firing would be a viable way to make those same forms but in a functional way.” Consequently, as his retirement from teaching approached in 2002, he ushered in a new chapter of his career by constructing a double-bourry-box wood-fire kiln adjacent to his studio. Planned for salt firing, the kiln was equipped with a car to facilitate loading without the aid of assistants. At first the arrangement was ideal, but eventually another change seemed in order. “After six or seven years of firing half a dozen times a year, I was getting older,” Borgeson explains. “I cut all my own wood. I would fire the kiln for about 15 hours by myself, and I would be dead tired at the end. Eventually I tore the kiln down and rebuilt it as a gas kiln.”

While the new kiln could provide the distinctive sheen and texture of salt glazing, the absence of ash in the firing atmosphere left a key element of Borgeson’s aesthetic lacking. Diagnostic of wood-fired pottery, natural ash glaze is not just a formal element. As an index of a specific process with a long history, wood-ash accumulation on pottery surfaces signifies not only a venerable tradition of working in clay but also a social dimension, something like a culture to which that tradition is central. Wood ash evokes the camaraderie built around the labor of kiln firing in pottery communities from those at medieval Shigaraki or Raeren to contemporary craft centers, university departments, and other places where ancient techniques of firing pottery are still practiced. In order to preserve these references to history and community, and perpetuate the evidence of chance in his work despite the transition to gas firing, Borgeson mists the surfaces of his vessels with water, then sifts on applewood ash through an 80-mesh screen before glaze firing. The result successfully simulates the random effects of wood firing and preserves the full range of its connotations. If there is a degree of subterfuge in this practice, that is, after all, the prerogative of art, which practices illusion as readily as allusion. 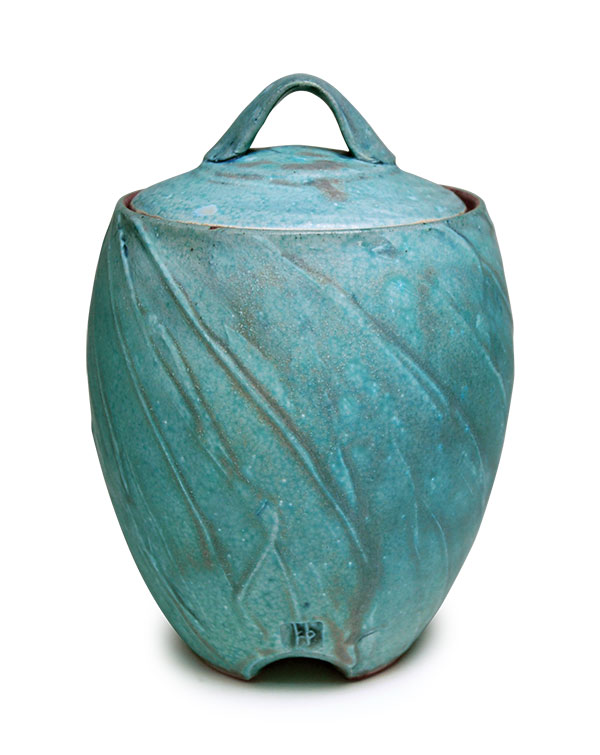 Borgeson’s illusion of natural wood-ash accumulation and its allusion to the tradition of wood-firing pottery is only one aspect of his works’ reference to a history of craft. Just as prominent are the suggestions of basketry that have found their way into the interior surfaces of his hump-molded bowls and trays. Baskets have long been part of Borgeson’s quotidian space. “We have a large collection that we’ve brought back from trips,” he explains. “My wife had a store in Whitewater back in the early 1970s, right about the time when Nixon opened trade with China. We bought lots of imported baskets to sell, and of course we kept some of those ourselves.” These have influenced the principal decorative elements in Borgeson’s work. Employing a version of a resist technique borrowed from Michael Simon, he alludes to basketry warp-and-weft patterns in a dense, matte-black stain mixed from Albany slip and cobalt oxide. After dipping the vessels in a thin slip and bisque firing them, he draws linear patterns with a pencil, waxes the surfaces, cuts the patterns through the wax using a stylus and a flexible ruler or French curve, and fills the incisions with stain. To avoid the problem of pooling in the wells of the vessels, he burns off the wax in an electric kiln before the final glaze firing in gas reduction. 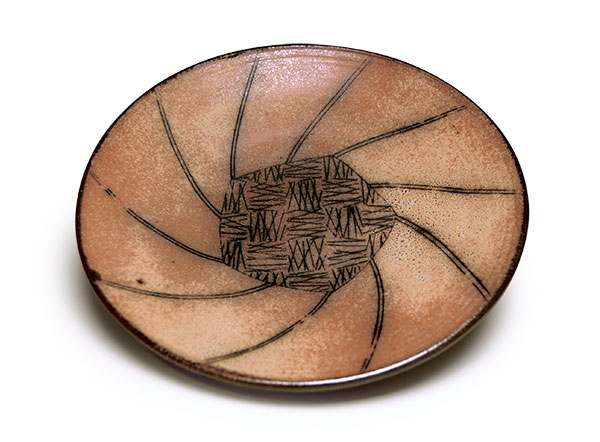 While baskets had long informed his aesthetic sense, Borgeson only began consciously referencing their patterning, albeit in abstract fashion, after an influential trip to Mali in 2009. “That was a mind-blowing experience for me,” he recalls. “We saw lots of masks, textiles, and baskets, but there were also the people, the way they live, the way they dress, the buildings they use to store grain. We’d be driving from village to village, and all I could think about was getting home and doing some new work.”

West Africa continued to resonate in his thoughts long after his return, prompting a second trip to Mali in 2011 that included visits to Burkina Faso and Benin. Interestingly, the pottery that he encountered left less of an impression than the patterns on wooden implements, traditional mud-cloth garments, and, above all, baskets. These patterns are not duplicated in Borgeson’s surface designs but rather invoked in abstractions of basketry structures adapted to pottery. One design, for example, consists of a pentagonal shape in the well—suggestive of a flat, woven-basket base —and radiating lines evocative of spokes for support of the warp and weft of basketry walls. These spokes divide the vessel wall into radially symmetrical sections, as, for example, in 17th-century Kraak ware designs, but their treatment as arcs suggests a flexibility alien to porcelain. Such a design is the product of looking, comparing, and synthesizing. “I’ve always been eyes wide open,” Borgeson asserts. “I’ve always looked around and taken things in. Things suggest themselves to me.” 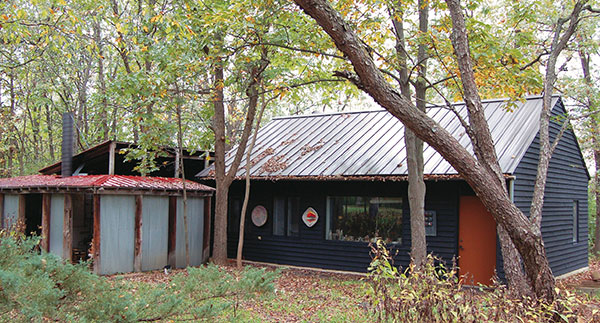 One such example, encountered in a museum in Mali, was a striking instance of fortuitous similarity: a wooden sculpture with horns or ears that Borgeson says, “looked exactly like the Batman mask.” Reflection on that unexpected resemblance and memories of looming mud-brick African granaries with projecting beams came together to inform a series of covered jars, swelling at the shoulders, studded with segments of protruding wire, and topped by lids with lustrous conical ears. On other occasions the inspiration has been more material than formal. A recent example of this kind of serendipitous suggestion involved a bucket of thickened clay. “I stuck my hand in to mix it around and just decided to put the clay on a pot,” Borgeson remembers. “It wasn’t a deliberate thing. I wasn’t looking for something new to do. It was just one of those things that suggested itself to me.” Using his fingers to produce irregularities in the resulting surfaces proved an ideal means of eliciting textural and tonal variations that seem to occur entirely naturally and spontaneously in a copper-green glaze. 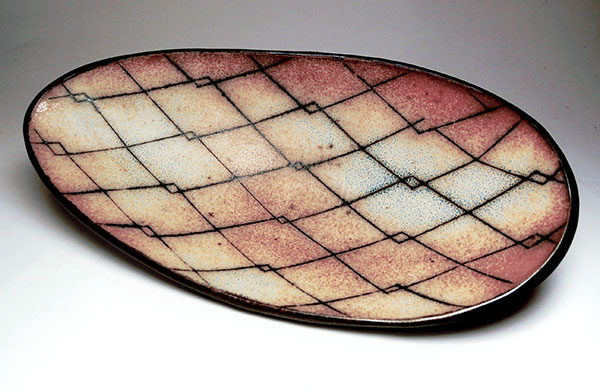 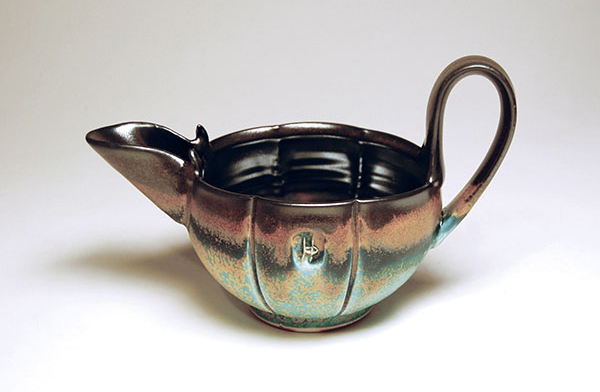 Such manipulation of natural effects is never obtrusive in Borgeson’s pottery. The work of the hand unites in balanced harmony with the consequences of chance, like the weaving together of warp and weft, even when the appearance of nature and accident isn’t strictly natural or accidental. In the end, this complementarity is perceived not so much as a stylistic trait of Borgeson’s pottery as a personality that is at once warm, guileless, and familiar in its naturalism and masterfully elegant in its articulation of form.

the author Glen R. Brown is a professor of art history at Kansas State University in Manhattan, Kansas.