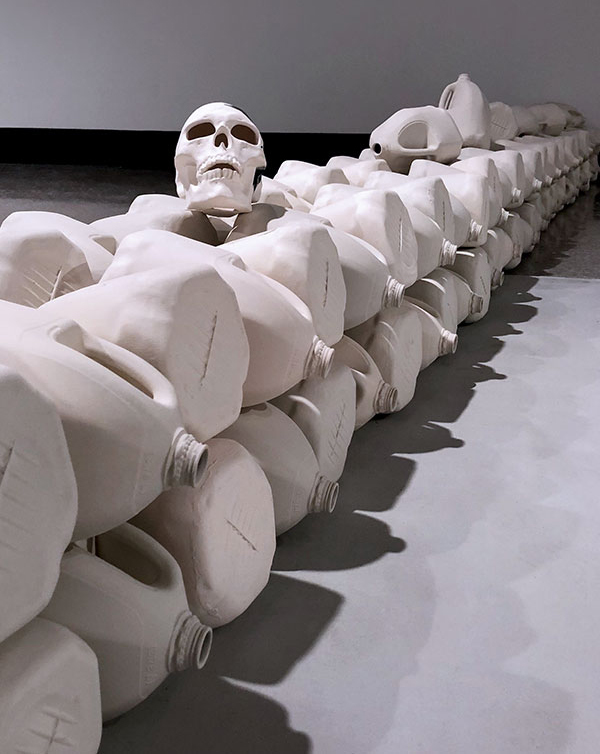 What does it mean to be American? Is it our beliefs or ideals or our shared pursuit of life, liberty, and the pursuit of happiness? The reality is that this dream is not accessible to everyone. This country has spent the last year in a national reckoning over structural racism and violence against communities of color, and it has us all examining our part in this system and coming to terms with our own individual identities and our nation’s history. Alongside these momentous movements, there has been an outpouring of artistic expression focusing on changing opinions, representing broader experiences by underrepresented people, instilling new values, and acting as a catalyst for communication.

As musician and civil rights activist Nina Simone once said, “You can’t help it. An artist’s duty, as far as I’m concerned, is to reflect the times.” Simone did just that, reflecting the reality of the Black experience in America surrounding the civil rights movement of the 1960s and beyond. Today, we continue to see artists sharing the breadth of human experience in America through their art. I had the pleasure of interviewing Juan Barroso, a ceramic artist and painter living and working out of North Texas. Barroso is a son of immigrant parents; his grandparents and their children received their US permanent resident cards at the end of Ronald Reagan’s presidency, all except his mother. There were some complications with her application, with her marriage to Barroso’s father slowing down the process. Shortly after, Barroso’s mother ended up moving to Mexico with Juan and his sister, who were born in Oklahoma City, Oklahoma, in hopes the paperwork would go through. 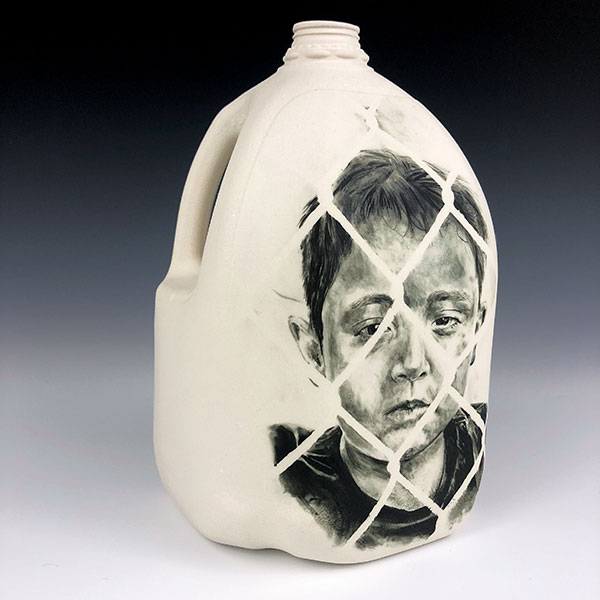 Barroso’s mother did all she could to provide for Juan and his sister. She sewed, washed, repaired, and sold clothes in the town of San Miguel Octopan in Guanajuato, Mexico, to ensure Juan and his sister could have a roof over their heads and not starve. Tired of just getting by, they moved back to the US when Juan was 9 years old. “With parents that were undocumented immigrants, I was always afraid we were only a speeding ticket away from deportation. My father worked in construction, my mother cleaned houses, and I kept my head down and became the first in my family to go to college. My parents became legal residents of the US in 2015, and I no longer had to hide pride in my Mexican heritage and Mexican values. It changed everything. I was no longer scared to talk about where I came from and set out to reconnect with my roots.”

Barroso explains that his art echoes these experiences in his personal life and he did not begin to explore Mexican culture and indigenous heritage in his work until his parents received their work permits. “I embraced my bilingual and bicultural identity with happiness,” he says. “What at first was mostly a celebration of culture became the realization that not every immigrant is as lucky as my family has been. Some don’t make it out of the desert. Some are dehumanized, called aliens, and end up in cages. Many are exploited and used for cheap labor. My hope is to help humanize the immigrant and break down notions of us and them.” 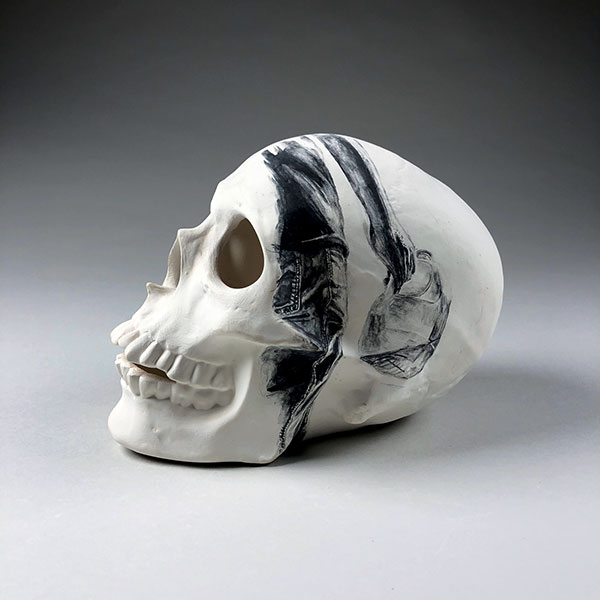 The imagery Barroso creates through his pointillism process is laborious and reflective of his admiration and respect for the immigrants who share his experience and to those who are still existing in the shadows with the threat of deportation. The process values craftsmanship and that is solely what Barroso focused on at the beginning of his career. “To make something beautiful and of value out of such a humble and mundane material felt like a metaphor of my family’s life,” says Barroso. 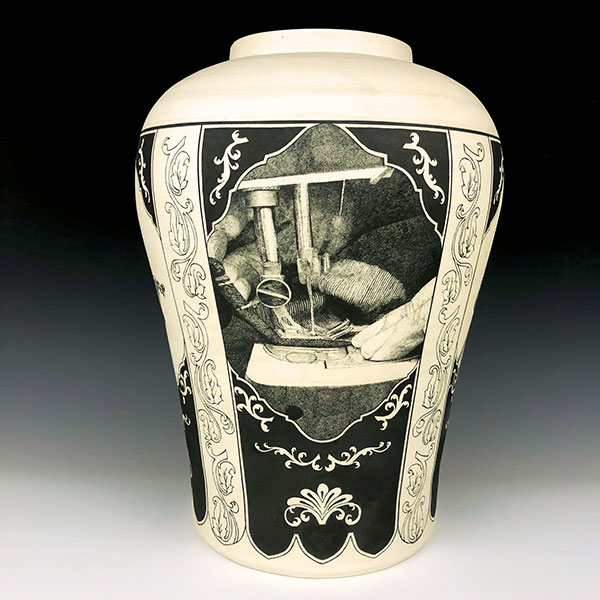 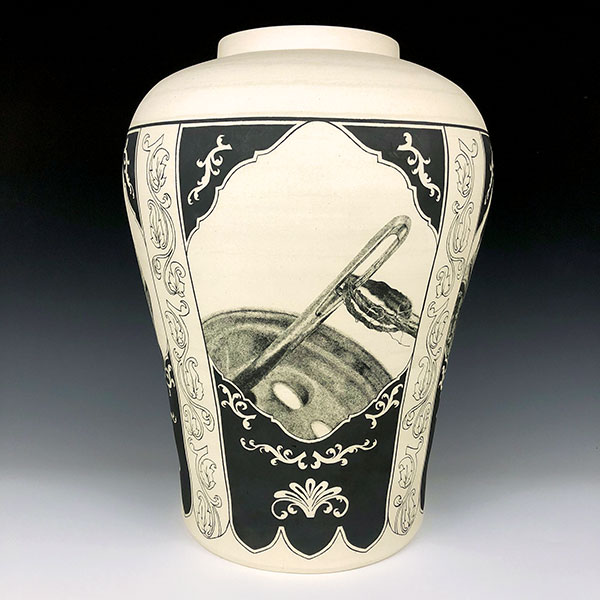 With the news of both of his parents receiving permanent residency status and work permits came a shift in Barroso’s work—along with the dedication to craftsmanship came a celebration of Mexican culture. Effortlessly combining drawing and painting with clay as his canvas, the almost photo-realistic imagery is a chance to document the reality from Barroso’s perspective. His art has also been a way to cope with the injustices he would see on the news or read about online. A hand picking fruit from a tree, fingers strumming a guitar, a fragmented face around the exterior of a cup. The repetition of painting all these dots to make a portrait became a calming act of meditation, like “praying from a rosary,” Barroso says. 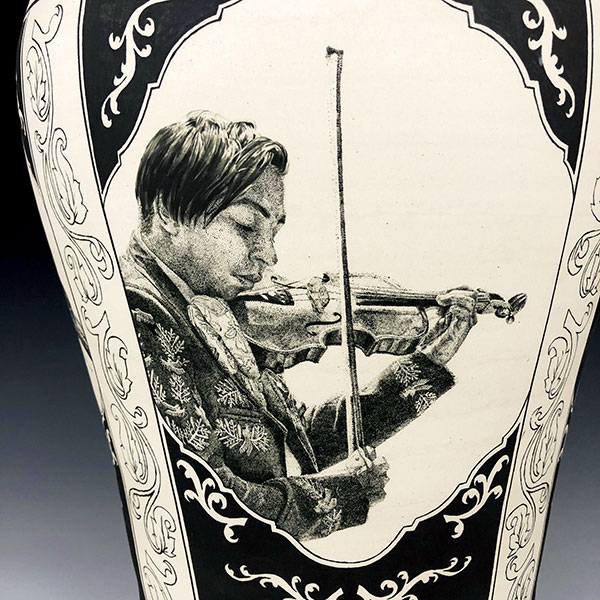 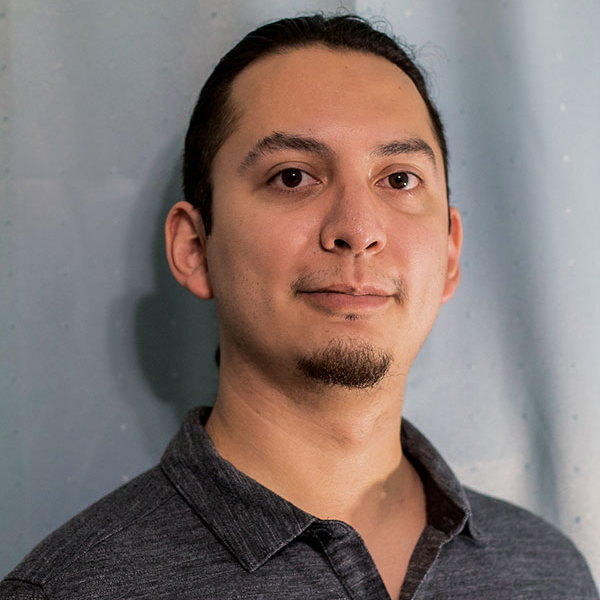 The scenes and people Barroso depicts in his portraiture renew his pride in the labor of immigrants and show the power, virtue, beauty, and importance of immigrants, with a focus on Mexican heritage and values. The overarching theme running throughout Barroso’s work is the importance of emphasizing immigrants’ humanity and individual lives. All of these scenes remind us of our commonalities, of what it is to be human, of what connects us to one another. Yet, today, there seem to be two Americas: an America that embraces our immigrant brothers and sisters and helps our fellow neighbors, and an America that is distrustful of immigrants at best, a view fueled by misleading and harmful political rhetoric and policies that negatively affect the immigrant experience in America.

I would argue that immigrant groups that have arrived at various times throughout the history of the US are the backbone of the nation’s shared culture. Immigrants have always made noteworthy contributions to the arts and culture that is consumed by Americans of all backgrounds. Within that larger group of new arrivals, immigrant artists who are people of color have creative and artistic output that has shaped every facet of American identity and culture. 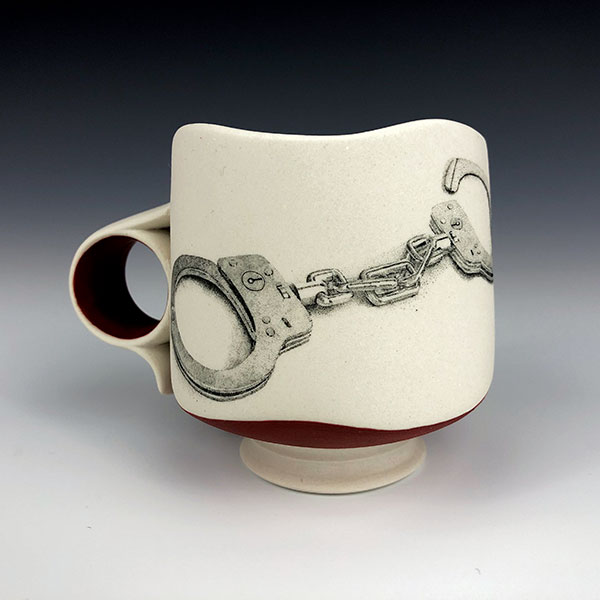 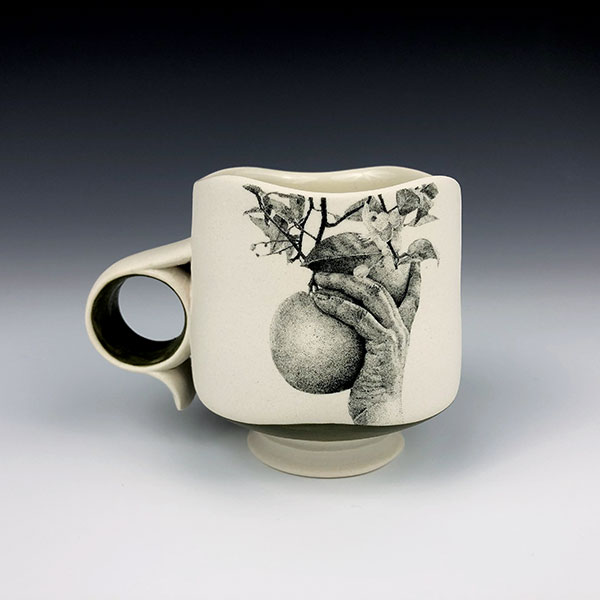 Social Justice and Racial Equity in the Arts

Creating equitable representation and visibility for strong and positive representations of BIPOC individuals and experiences invites all of us to break down stereotypes that are limiting to our society and move toward fellowship, social justice, and racial equity in the art world as well as the wider society. Barroso has received support for exhibiting his work in California, including at El Comalito Collective, a gallery in Vallejo focused on underrepresented artists. He is now selling his work through Companion Gallery in Humboldt, Tennessee, thanks to gallery director Eric Botbyl, who has been a good friend since the first ceramics exhibition Barroso applied to. He has also found support from the ceramics community, who he believes to be tolerant and accepting of difference.

Barroso is often told that his work is heartbreaking, poignant, and beautiful all at the same time; it evokes empathy. Barroso shares some more responses from individuals who have viewed his work: “Sometimes it is a story of someone who shared a meal with them, a story of great craftsmanship in a project or job, or a story of a white family member who also worked in the professions I depict. Sometimes, it seems like a chance to find what makes us similar.”

The arts and humanities feel more essential to us now than ever before, after over a year and a half of isolation and uncertainty. The arts help us understand each other, where we have come from (individually and collectively as a nation), and where we want to go. Barroso’s art and perspective help us understand a truer sense of our all-encompassing identity here in North America. 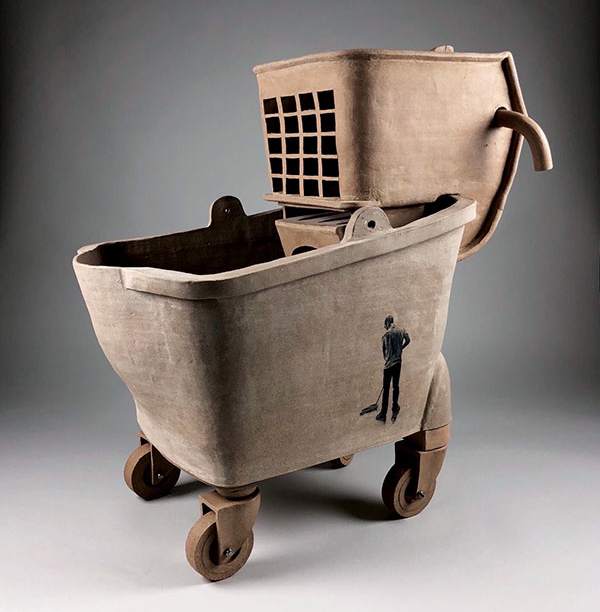 Barroso has recently earned his MFA in ceramics from the University of North Texas in Denton. He is currently spending more time on researching and reading about Latin American history, glaze chemistry, and 3D printing, and thinks our current situation due to the pandemic “can be an opportunity for growth from the safety of our homes.”

I would personally like to thank Barroso for being so forthcoming with his family’s story. Let it sit with you, let it move through you, and may it be a reminder that we all have a lot of work to do to dismantle the oppressive systems that exist within our country’s administration and within ourselves. To understand Barroso’s story, his art, is to understand that immigrant lives are fundamentally human lives.

the author Krista Cortese, is a studio potter and ceramic educator working out of Seattle, Washington. To learn more, visit www.kristacorteseceramics.com.