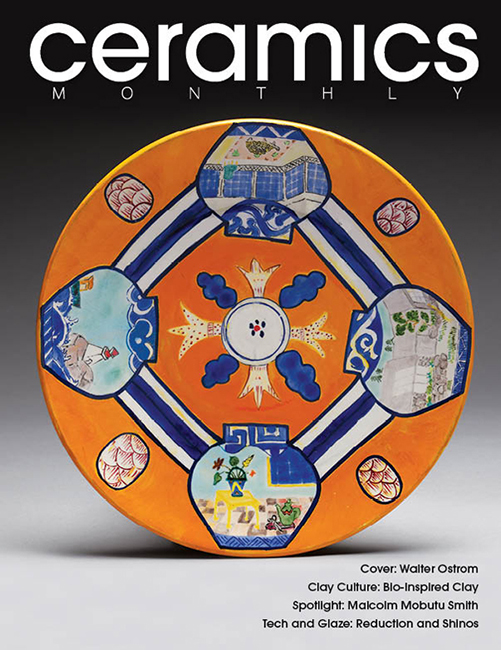 By mimicking the internal architecture of plants, ceramics can be programmed to fold and twist during the firing process.

Ceramics are inert, strong, and stable objects. After being fired at an elevated temperature, the shape of a ceramic object cannot be altered. However, during the change from a soft, plastic greenware claybody to a stiff, solid, ceramic form, transformation can occur.

Researchers have been exploring how this shape transformation can be controlled and programmed. To do so, they are using an approach inspirated from natural plants. The results of this research are published in an open-source article entitled Bioinspired self-shaping ceramics (DOI: 10.1038/ncomms13912).1 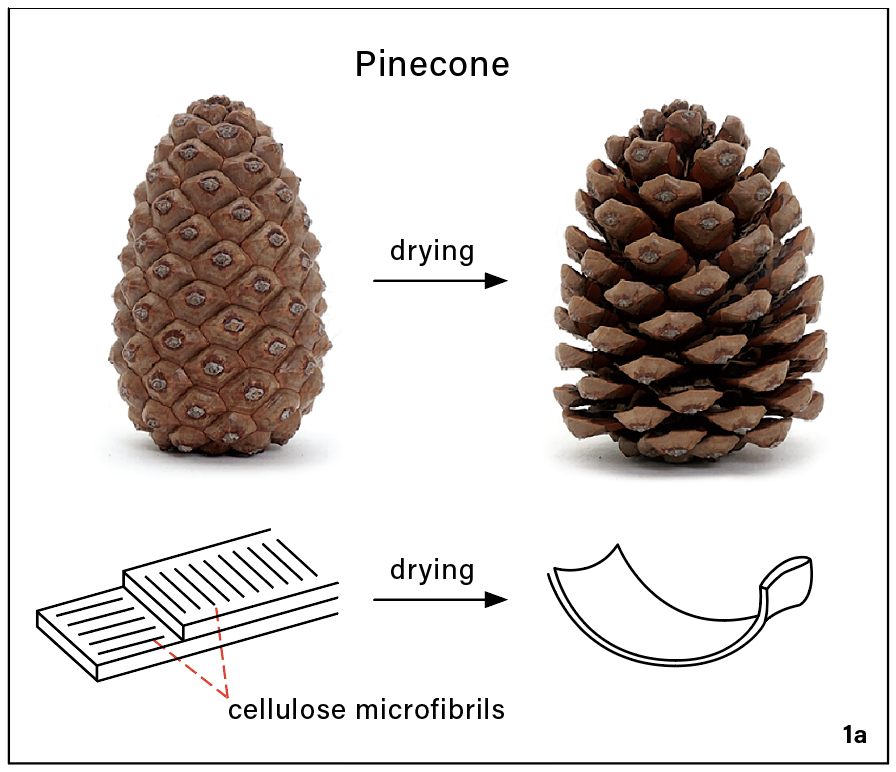 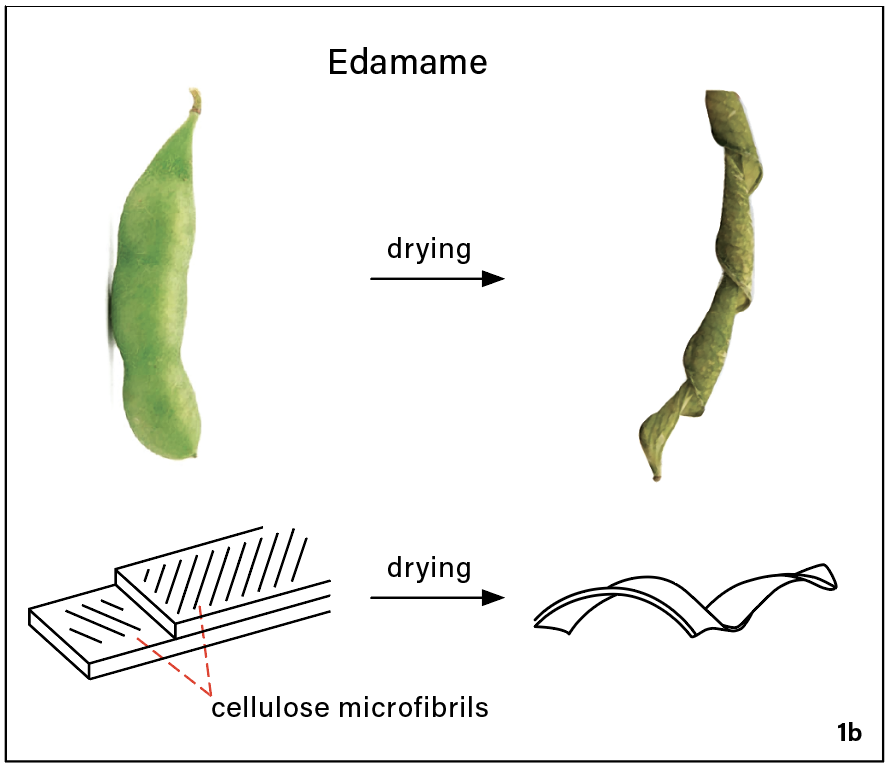 1 Morphing plants and schematics of their internal organization: pinecone (1a) and edamame seedpod (1b). The scales of the pinecone can be schematized by a bilayer with perpendicular directions of stiff cellulose microfibrils in a soft matrix. After drying, the bilayer bends. The seedpod carpel can be schematized by a similar bilayer but with an angle of 45° with respect to the edge, leading to twisting after drying.

Bioinspiration, sometimes also called biomimetics, is the art of deciphering a mechanism found in nature, and applying it in another context. In the field of self-shaping, plants are a tremendous source of inspiration. Despite their appearance, plants change shape often. For instance, tree branches bend with humidity, pine cones open when dried, and carnivorous plants close to catch insects.

The mechanisms by which these plants morph is inscribed in their internal organization.2 Schematically, plants are composed of cellulose microfibrils, which are long and strong fibers that are aligned in a soft matrix. The plant material is then strong along the direction of the microfibrils, and weaker perpendicularly.

Taking the pine cone as an example, each scale can be schematized as a bilayer, with cellulose microfibrils oriented at 90° between each layer. When drying, the two layers shrink in perpendicular directions. Due to its elongated shape, the scale bends when drying. A similar principle is found in edamame seedpods, where the fibrils are at a 45° angle with respect to the edge of the pod, resulting in a twisting motion upon drying.

Warping and Shrinkage in Ceramics

Plants change shape due to shrinkage when drying. Similarly, ceramics shrink during their firing. Ceramics makers are familiar with the effects of inhomogeneous shrinkage and warpage. For example, thin plates often bend at their corners during firing.

To obtain a ceramic greenware body that shrinks more along one direction, and that shrinks less perpendicularly, elongated reinforcing elements mimicking the cellulose microfibrils can be added, aligned, and oriented.

Technical ceramics made of aluminum oxide are interesting for this purpose because raw powders with spherical and plate-like shapes are commercially available.

The general process to prepare aluminum oxide ceramics consists of dispersing the powders in a liquid, aqueous slurry. Then, the powders are coagulated into a green body by drying or a chemical reaction. The ceramic is obtained after firing to 2912°F (1600°C), during which shrinkage occurs due to densification.

The slurry is then spread into a thin, flat layer, and placed under a magnet. The plate-like, magnetic particles align in the magnet direction within minutes.

To fix and maintain the orientation of the reinforcing particles, an enzyme is added into the slurry. The enzyme, extracted from jack beans, increases the pH of the slurry with time, leading to its coagulation. The amount of enzyme added controls the kinetics of the change in pH, allowing sufficient time for the platelets to get aligned.

Once the orientation in one layer is fixed, another layer is spread on top and aligned in another direction, following the same principle. Before completely drying, the wet bilayer is cut into strips that mimic the scales of pine cones or the carpel of seedpods (the outer shell of the pod).

Finally, firing induces shrinkage in the plant-like organized ceramic, resulting in distortion and changes in shape. As the temperature increases, atoms diffuse and the material densifies. However, the large reinforcing particles hinder the shrinkage along their direction of alignment, leading to smaller shrinkage in that direction, and a higher shrinkage in the perpendicular direction.

Bilayer ceramics with bending and twisting motions could be obtained using this method. The amount by which these ceramics bend and twist is predictable from their internal organization and the firing temperature.

Self-shaped ceramics could be used to produce ceramic parts with intricate shapes, for example for jewelry, or other specific applications. The bio-inspired principle can be applied in other materials, such as composites and recently in clay,3 to open up new shapes and applications.

the author Hortense Le Ferrand received her PhD in materials science in 2017 from ETH Zurich in Switzerland. Since 2019, she has been working as an assistant professor at the Nanyang Technological University in Singapore, where she develops additive manufacturing of bioinspiration composites and ceramics. To learn more, visit https://personal.ntu.edu.sg/hortense.