Appears in the November 2016 issue of Ceramics Monthly. 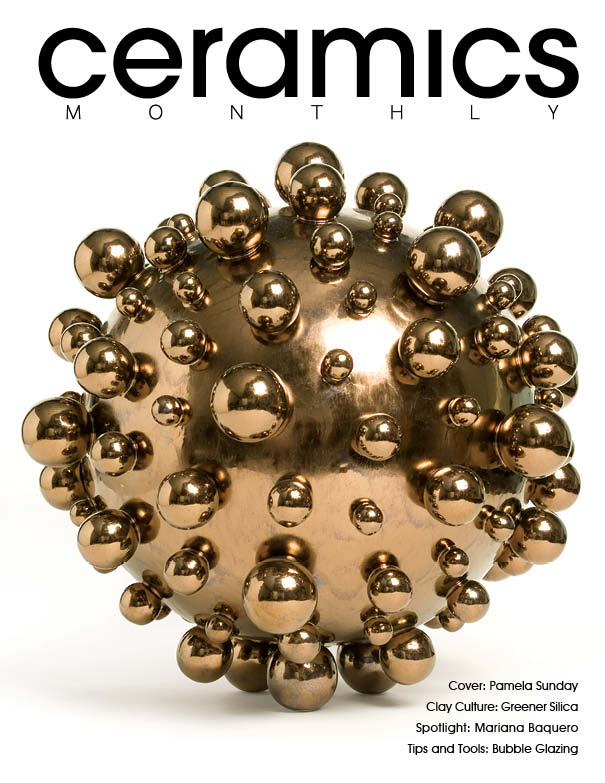 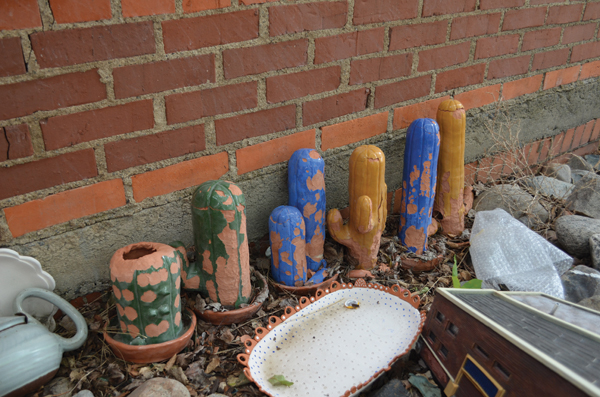 When can fired ceramic work be left outside in the winter and when should it be brought in and protected from the elements? Here’s a one artist’s painful experience that answers that age-old question.

Absorption: The amount of water that can leach through a fired clay body, regardless of the glaze or coating material.

Porosity: A measure of the total volume of space between or within particles and phases within a ceramic material.

Vitrification: The melting process that clay bodies and glazes go through as they are fired to maturity. Completely vitrified clay will no longer absorb water.

Back in the 1990s I had a small ceramics business that specialized in tile, fountains, lamps, and other decorative indoor and outdoor wares. Early in my career I submitted a proposal for a large tile mural that would have decorated the exterior of a children’s hospital in Washington State. The tile design I proposed—a mosaic of tiles cast using brightly colored and marbleized slip depicting sea creatures—would have been constructed with two completely vitrified clay bodies.

My proposal was rejected by a slim margin. At the time I was very disappointed. I now that realize I probably dodged a bullet, and most likely avoided a lawsuit or even potential financial catastrophe. I believe the finished mural would have been very lovely, at least until a couple of winters had caused it to disintegrate.

If clay is vitrified, it has been fired to the ideal temperature, the glass-formers in the material have done their job, and the ceramics will no longer absorb water (if you fire the clay any hotter it will start to deform, bloat, and eventually melt). Like most ceramic artists, I mistakenly believed that completely vitrified clay was impervious to damage caused by exterior freezing and thawing conditions, because water was not able to enter the material, freeze, and expand. Unfortunately, it’s one of those theories that looks really good on paper, but the reality can be quite different.

In the earlier years of my business I used two commercial clay bodies—a cone 6 porcelain casting slip and a low-fire casting body that I would fire between cones 1–3. I created small tabletop fountains with both clay bodies, and both appeared to be completely vitrified at their respective firing temperatures. The fountains could sit full of water for weeks on a tablecloth without the cloth ever becoming damp. I would use the porcelain when I wanted an unglazed surface and the low-fire body when I wanted colored surfaces (I primarily used underglazes for decoration, and I also mixed Mason stains into the low-fire casting slip to create marbleized effects).

It took a couple of years of painful experience for me to realize the error in my thinking about freeze/thaw clay bodies. In one instance, I created a large birdbath for a customer, who left it outside in the winter after I had advised her that the fired clay was completely vitrified and impervious to freezing temperatures. The piece broke into numerous pieces after the first couple of hard freezes. Then another customer called to tell me that her garden statuary, which I had made, had not survived the winter. I think in one year I replaced a dozen pieces. It was very embarrassing. 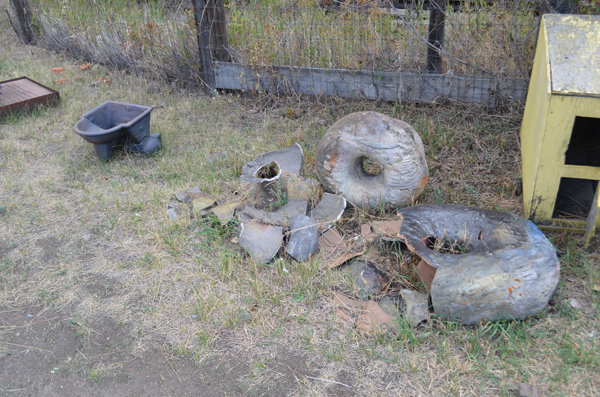 Quick to continue my foolish line of thinking, I started soaking my outdoor pieces in a commercial water sealant. This seemed to work better, but the pieces still broke after a couple of winters. I eventually stopped telling people that my work could survive freezing temperatures.

Why doesn’t vitrified ceramic survive freezing? First, we need to realize just how destructive the smallest amount of water can be. If trapped water freezes in ceramic, no matter how miniscule the amount, it will expand and can break the ceramic. The reality is, it’s impossible to ensure that zero amount of water will invade the small nooks and crannies that exist in all ceramic objects.

Why do some vitrified clay bodies withstand freezing water in some places while other vitrified bodies do not? Tile murals or sculpture that are sheltered and drain properly are less likely to succumb to freeze/thaw damage. In northern climates, sub-zero weather often means very little moisture, and fewer episodes of freezing and thawing.

However, the solution to the problem of creating a fired clay body that can withstand freeze/thaw conditions is evident in our surrounding architecture, in almost every fired brick and every terra-cotta roof tile—a testament to the fact that a clay body can be designed to withstand freezing temperatures. And yet, go up and lick a red earthenware brick or a terra-cotta roof tile. Your tongue sticks, right? Because the ceramic is still porous and absorbing moisture.

The solution, it seems, is not to make a completely vitreous clay body, but to create a clay body that can both absorb and exhaust water.

In Cushing’s Handbook, Val Cushing describes a successful freeze/thaw clay body as having a “pore structure.” Basically, a successful clay body must be riddled with capillaries and tiny veins that can push out the expanding water as it freezes. The fired ceramic can absorb water, but is also designed to expel water before it can cause damage. 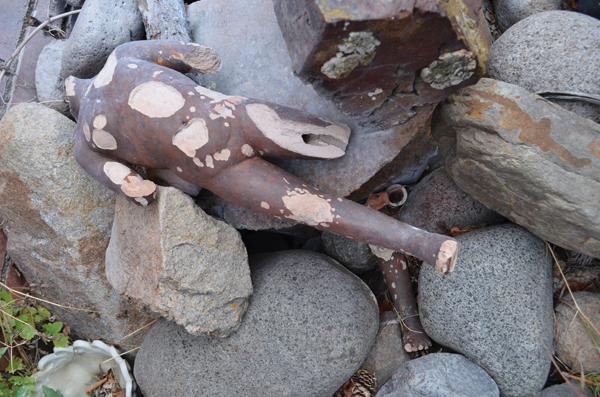 A successful freeze/thaw clay has a pore structure that allows the water to naturally vent as it freezes then expands—it is never trapped. The clay moves out in a similar way that water freezing in a garden hose moves out of the end of the hose. With a vitrified clay body, the clay is almost completely fused, it will not absorb water. However, (like solid rock), small cracks formed during firing, or formed over time due to natural expansion and contraction caused by temperature changes, will allow tiny amounts of water to enter. This water expands when it freezes, and if it cannot vent properly it will break the ceramic. 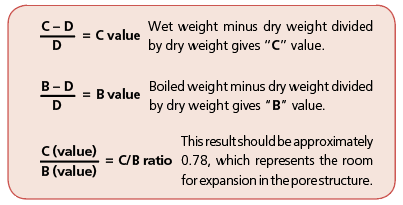 1. Measure the dry weight of a fired sample of your clay body. Record this weight as D (for dry weight).

2. Immerse the same sample in water for 24 hours. DO NOT boil the water.

3. Remove the sample from the water, wipe off the surface water, and immediately measure the saturated weight (after 24 hours in water). Record this weight as C (for room-temperature wet weight).

5. After two hours of boiling, wipe off the surface water and carefully weigh the sample. Record the weight after boiling as B (for boiled wet weight).

6. Use the weights determined above in the following formula:

7. The final result should be around 0.78 to indicate that a clay body is safe for outdoor use in freezing and thawing conditions/situations. This calculation is the standard test used in the ceramic industry (structural clay products) to be sure clay bodies are safe.

So it’s not necessarily a difference in the formula of the clay body (although obviously some clay bodies make better freeze/thaw clays). The low-fire, terra-cotta recipes that work for bricks and roof tiles could be fired hotter, and eventually be allowed to vitrify, but this would change the C/B ratio. My cone 6 recipe is very sturdy at cone 6, but it can also be fired much hotter, and eventually the body will seal as the clay completely vitrifies. But again, firing my freeze/thaw clay hotter would change the C/B ratio. 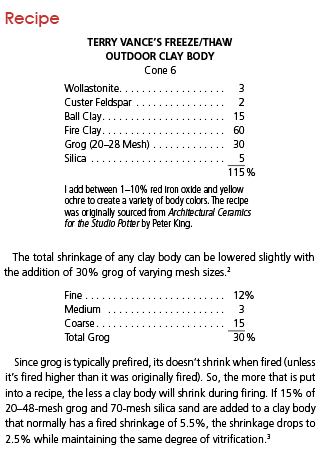 the author David Scott Smith is currently the Assistant Professor of Ceramics at the University of Arkansas in Little Rock. Examples of his work can be viewed at http://davidscottsmithceramics.com.