Appears in the September 2016 issue of Ceramics Monthly. 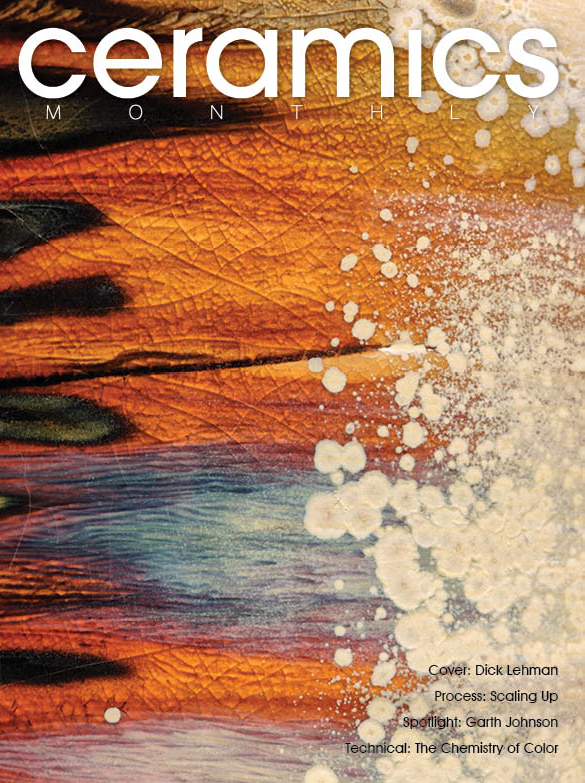 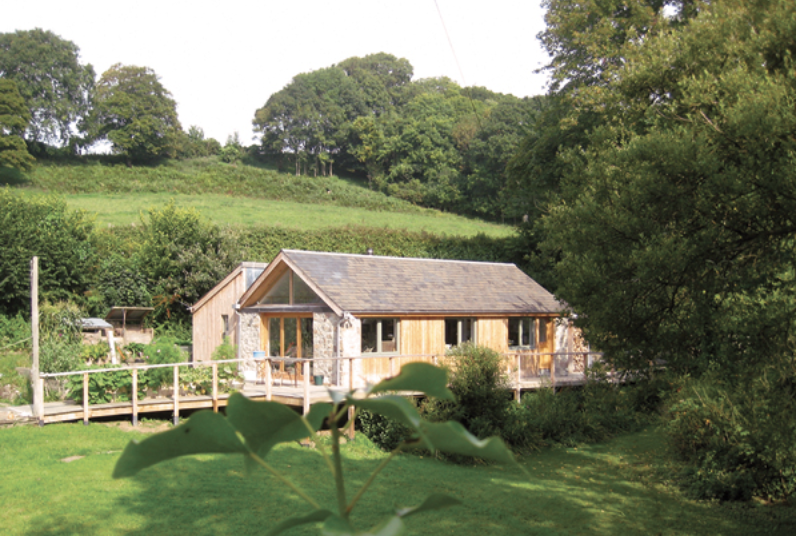 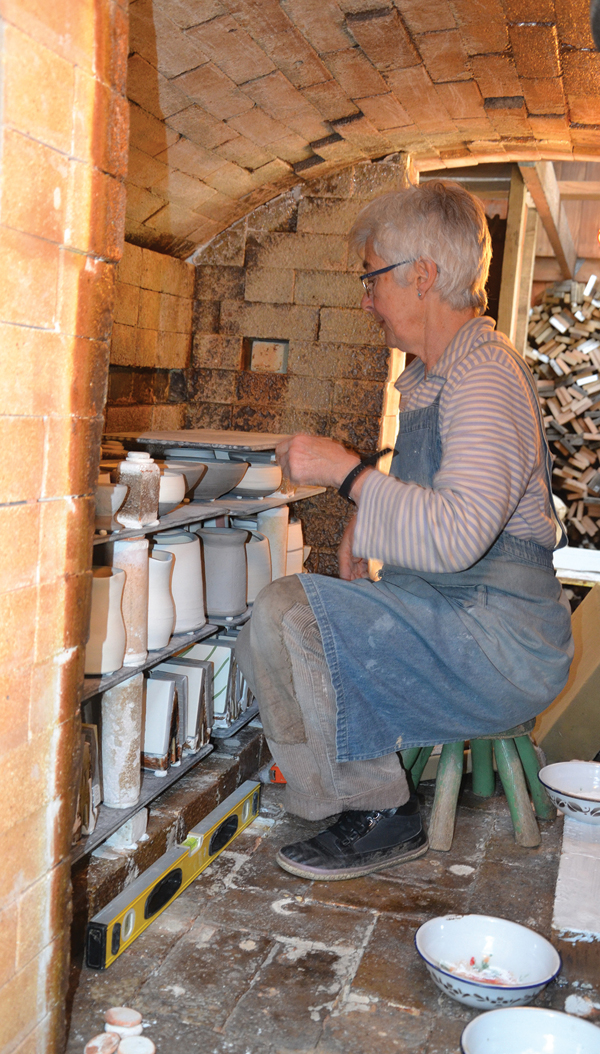 Micki Schloessingk moved to the secluded Gower Peninsula in southern Wales (UK) in 1987. Her property stretches along a tidal river in a narrow valley. The coast is a mile away; free-roaming sheep are among her closest neighbors. Her business, Bridge Pottery, is the fruit of many years of planning and redesign. She renovated an existing outbuilding into a studio, and constructed the following: a clay shed, a kiln shed, an office space, and a gallery. Micki recalls the thinking behind the designs and eventual finished structures, “I thought let’s make this a really nice place to work. For the studio I wanted quiet, flexibility, warmth, and energy-efficiency. The result is a bright, airy room with a large table, five wheels, ample shelving (some designed by her friend Nic Mosse that double up as rolling ware carts), and a folding partition that can divide the space into two. It boasts wood stoves, efficient insulation, and solar panels. Due to the noise, the pugmill is in a separate clay-preparation room, along with an extruder and more shelving. It’s a very ergonomic workspace, but Micki explains she still has ideas for improvements, including “a remote for the radio, window blinds, a dentist’s apparatus to move my wheel up and down with a foot control. . . and I’d really like a Peter Pugger!” 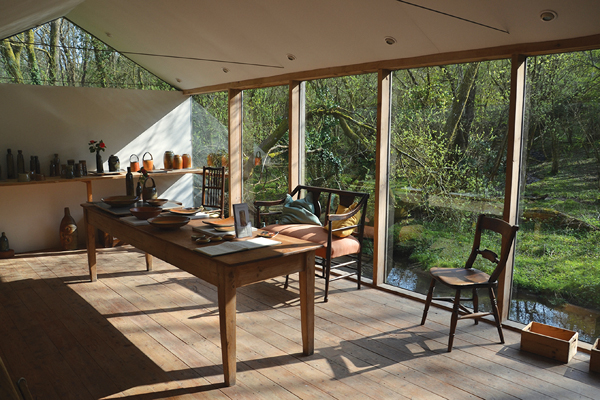 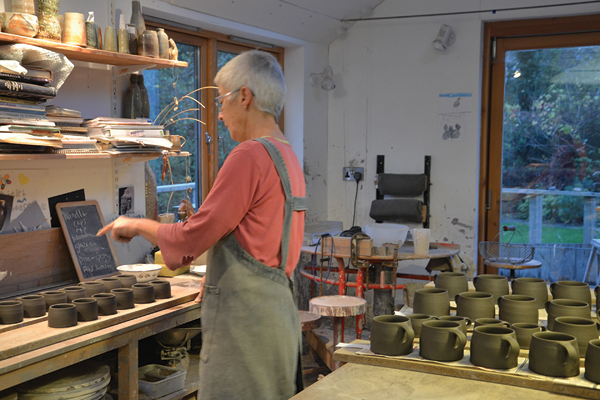 Micki uses a clay from St. Amand, the traditional French epicenter for wood-fired, salt-glazed ware. Apart from the clay having a good silica-to-alumina ratio for the salt, she likes that it is still dug from a single pit and can be rather unrefined and speckled with iron pyrites. Micki loves the process of slipping leather-hard pots in preparation for single firing and admits that salt firing attracted her because she didn’t have to handle bisqueware. While a student in the Harrow Studio Pottery course, she built her first wood/salt kiln and remembers going around London asking for wood to fuel the firings.

Despite having made pots for over 40 years, Micki says, “I yearn to explore new territories, handbuild more. . . . I need to allow myself more play. There’s a sense of wholeness that I haven’t yet reached.” She endlessly takes notes, keeping track of the slips and clay bodies she constantly tests, trying to improve the packing and firing of each kiln load. She admits, “sometimes, I allow myself to not write down what I did, and it comes out great, and I have no way to figure it out again,” which is a momentary lapse in discipline that many of us can identify with. 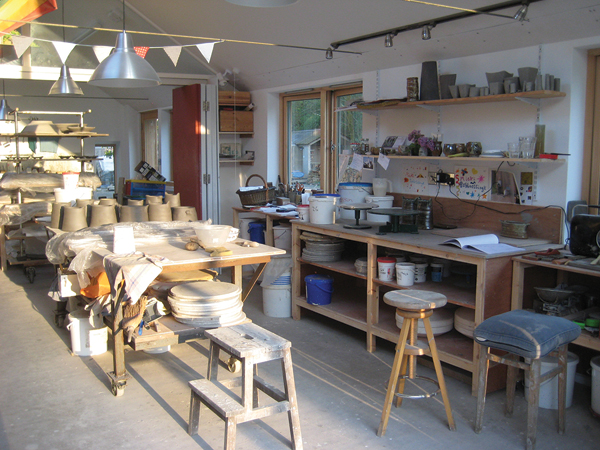 Micki’s family used to help, especially with the firing. Since her sons moved away, she has hosted many students and helpers informally, as well as taking on an apprentice, Fleen Doran, through the Adopt-A-Potter program (www.adoptapotter.org.uk), who she still shares firings with. Young potters live here for a few months or years, working for Bridge Pottery as well as developing their own pots. Local people come weekly to help with maintenance (cleaning shelves, pugging clay, stacking wood, etc.) and are either paid or swap services. She explains, “I do the things only I can do, but as you get older time feels more precious, and the jobs would be overwhelming on my own. I wouldn’t make many pots without this informal network.” Without this support system, she couldn’t fire her 97-cubic-feet kiln three or four times a year. In the future, she envisions building a smaller kiln, which will be easier to manage. 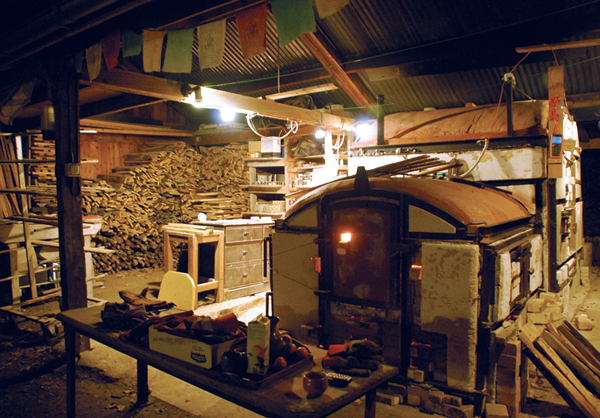 She enjoys teaching and mentoring. “I like sharing with potters keen enough to seek me out, she says. They are the only ones really interested!” She muses that working with people is “challenging and rewarding and inspiring and difficult . . . . but I also learn by watching potters who work here.” Of course coordination is critical. Thursday is what she calls “Bridge jobs day” when she puts aside her own work to oversee other people’s. She notes that on those days everyone always shares a very nice lunch, which builds a sense of camaraderie. Winter months are more solitary, a good time for making or other projects.

Micki embraced throwing standing up at her electric wheel to look after her back (although she still sits at the kick wheel). She trained as a shiatsu practitioner in her 30s but realized she had to choose between shiatsu and pots. Nevertheless, she became aware of balancing the energies in her life. Daily stretches are part of her morning regimen, and she adds, “the most important thing is I nap every day!” She also enjoys walking by the sea. Although she doesn’t socialize much as a firing approaches, Micki often takes a week off afterward to visit friends and family. 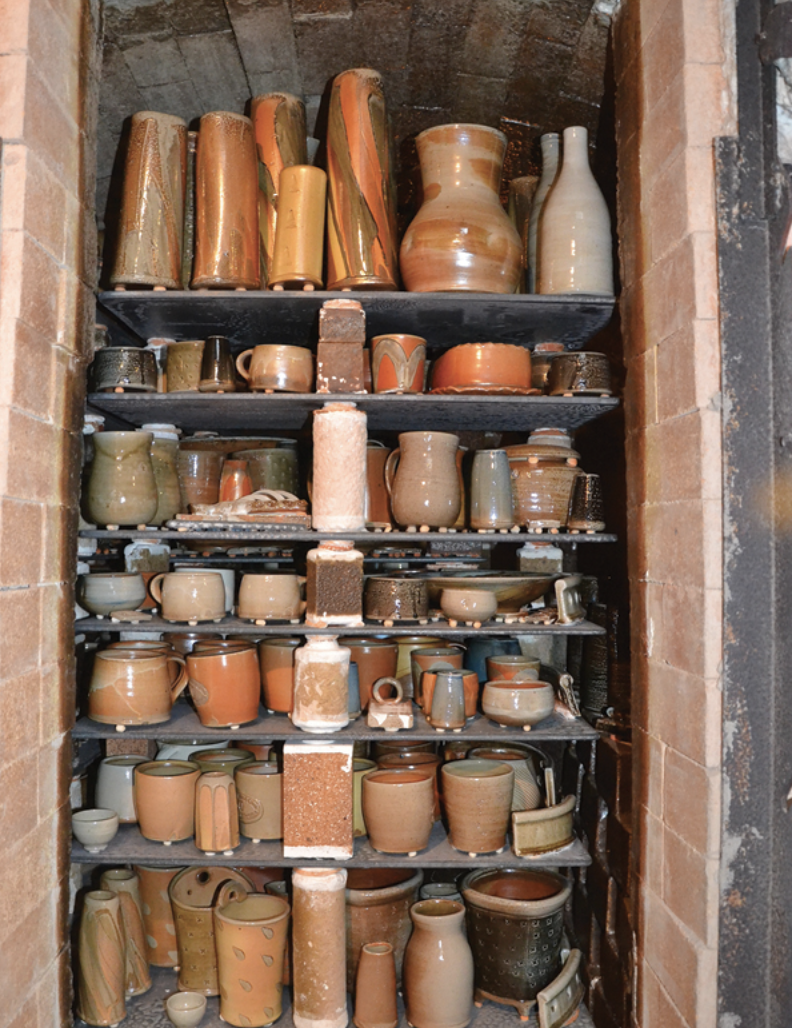 Micki consistently works weekdays from 8:30 am to 5 pm, plus evenings and Saturdays before a firing. “I find it beneficial to have a routine, a sense of time,” she explains. There is a daily coffee break at 10 and tea at 4. When sharing the studio, there are Friday meetings to plan the following week. Talk radio is too disruptive so Micki plays classical music or works in silence, adding that she needs the most mental space when applying slip. She admits that even with a daily schedule that she follows, it can be a struggle to put time aside for office work.

As well as keeping Bridge Pottery productive, Micki is very involved in the community. She helped set up a village co-op shop and takes responsibility for the organics section. On delivery days she stops work to restock the shelves. A strong advocate for sustainability and social change, she grows some of her own vegetables, and buys the rest through a CSA. “If I wasn’t deeply a potter I would be a social activist . . . or a tango dancer,” she quips. 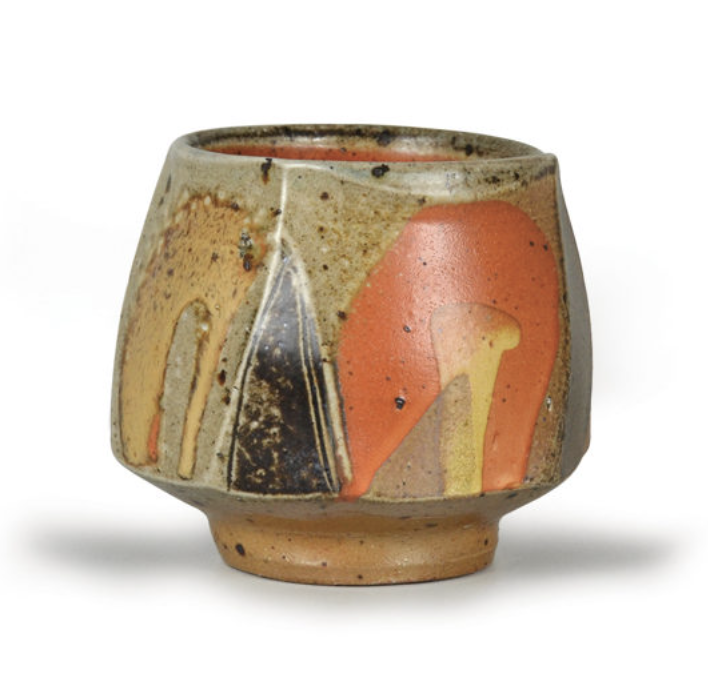 Micki just updated her website so it is mobile responsive, since many people now rely on smart phones and tablets to browse, search, and buy online. When it comes to social media, she says, she “missed the boat with Facebook but plans to try Instagram.” 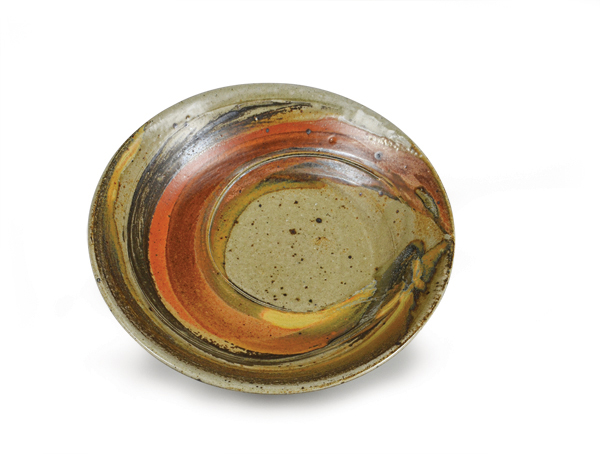 The Gower Peninsula attracts tourists, and sales from her gallery have risen over recent years. A summer sale, to shift pots that have been around for a while, and another sale before Christmas are well attended by local folks. “It’s important to reach younger people,” Micki says, “it’s very pleasing when they like pots.” She rarely sells at fairs anymore, but has work in galleries in Swansea and London to reach new audiences. Her next show is part of the Language of Clay Series, and is titled “Earth, Fire and Salt.” The exhibition will travel throughout Wales for a year. It will tour Swansea, Mission Gallery (through September 4), Ruthin Craft Centre (October 1–November 27), Aberystwyth Ceramics Gallery (January–March, 2017), Lliantarnam Grange Arts Centre (April 8–May 27, 2017), and Cardiff, Craft in the Bay (September 1– October 29, 2017).

Micki believes that for her, “the key word is trust. Trust the process, not analyzing or worrying too much. Trust that I offer something valuable to the world and to the people who work with me. Trust that it’s ok to sell pots for money. . . . Pots nourish people in a different way.”