Appears in the February 2021 issue of Ceramics Monthly. 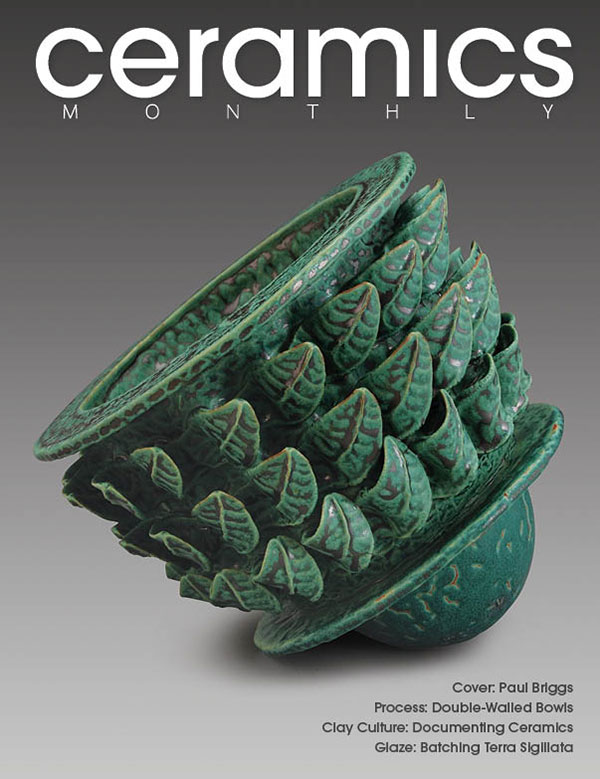 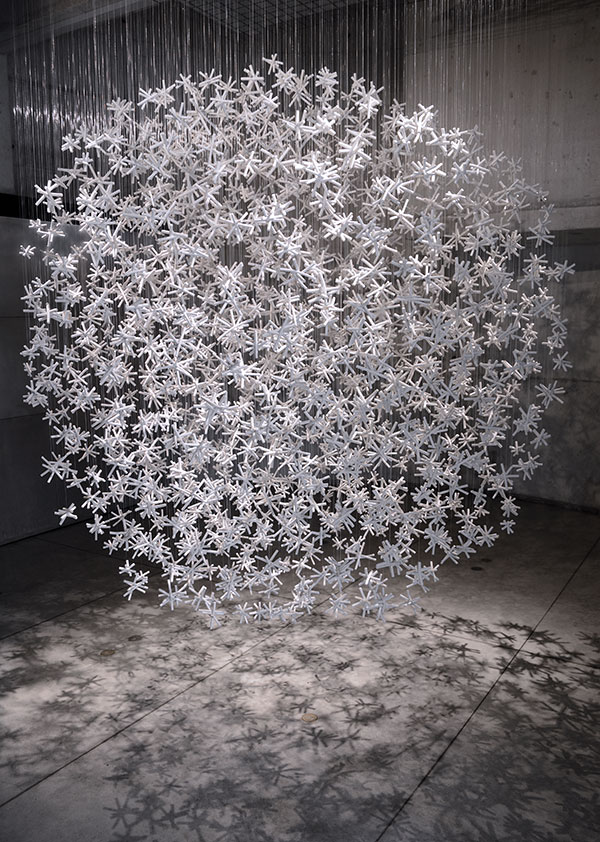 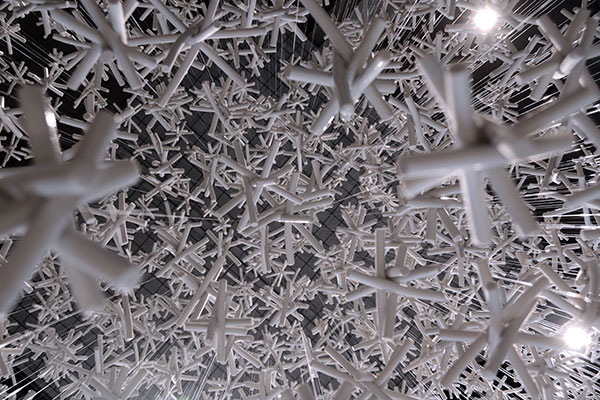 1, 2 All We Can Do Is Keep Breathing (overall and detail), 1,350 porcelain components, installed at the Canadian Clay and Glass Gallery, 2018. Photos: Karl Griffiths-Fulton.

Canadian ceramic artist Samantha Dickie speaks quickly, her observations regarding space and time, connectivity, and contemplative neuroscience tumbling out in directed and descriptive speech. That she makes large work isn’t surprising; her energy suits big spaces. The silences after a spill of information seem innate, allowing for her listener to catch up, for the information to sink in, and for Dickie to contemplate the ideas. What seemed accidental—the same concepts recurring throughout her career—she realized upon looking back was actually deliberate. Her art is a reflection of what she has been thinking about and researching over the last 20-odd years.

Dickie’s abstract installation work is composed of pluralities: multiples of the same shapes making a whole as well as explorations of dualities like time and space, our relationship with ourselves and with others, our urban environment and nature, and how all of this leads us to the present and a sense of being. Her original exploration of space, beginning with a BA in Women’s and Native Studies at Trent University in Peterborough, Ontario, threads through all her installation work and has evolved over time into a more esoteric contemplation of how space and time interact.

Yet when Victoria, British Columbia-based Dickie releases her work into public art spaces, she expects each visitor will have individual interpretations of their experience. The public feedback gained from each project informs the next. Pursuing provincial and national grants to make public art allows Dickie to focus on the concepts behind the work rather than exclusively making objects to sell, while also ensuring she has large enough spaces to exhibit her art. 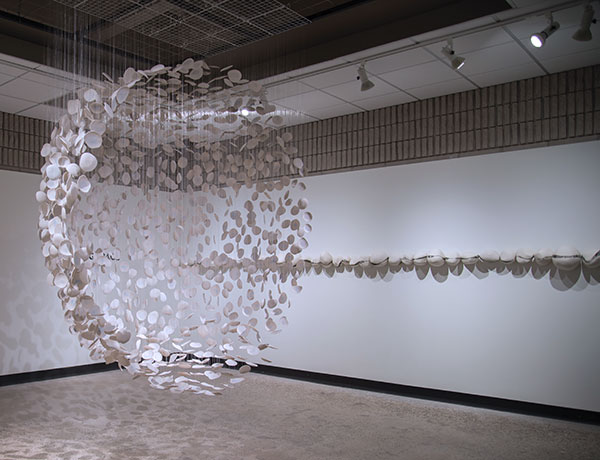 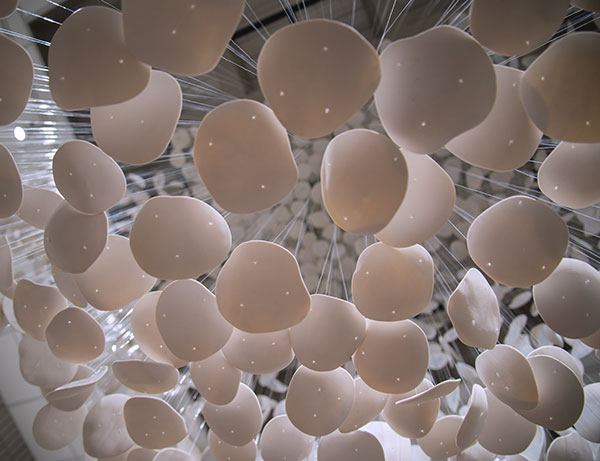 Dickie’s method of working in multiple narratives informed by viewer feedback expanded while doing a residency in 2003 at the Banff Centre for  Arts and Creativity, after completing the three-year clay program at the Kootenay School of the Arts in Nelson, British Columbia. She attended another residency that year in Red Deer, Alberta, and the following year with her daughter in tow, spent 12 weeks at the Klondike Institute of Art and Culture in Dawson City, Yukon Territory. While at The Sculpture Factory in Jingdezhen, China, in 2013, she made hundreds of photo transfers from photographs of her travels, later used in her large exhibit, “Holding Space,” at the Art Gallery of Burlington, Ontario, in 2019. In December 2020, the Art Gallery of Greater Victoria acquired 11 of the sculptures from Dickie’s Art Gallery of Burlington show for their permanent collection.

Walking around All We Can Do Is Keep Breathing, an installation of 1350 separate porcelain star shapes hung in a globe design from the ceiling of the Canadian Clay and Glass Gallery in Waterloo, Ontario, creates a mesmerizing experience for the viewer. The process of circling it becomes meditative, the light reflecting yet more shadowy star shapes on the walls, creating a sense of the infinite. The complexity of pattern and the absence of color, the chaos of the many hung in one large sphere, all contribute to a busy unity that results in a feeling of simplicity. The dualities present in all of Dickie’s work meld here into a contemplation of space: space to be, space to inhabit, space to think, and ultimately space not to think. The artist says, of her craving for large uninhabited outdoor spaces, “there is a particular feeling, being totally absorbed by the enormity of the land and feeling so, so small. These are feelings I want to transpose in my work where the relevance and irrelevance of our lives co-exist within us. It is a bizarre and very powerful feeling connecting us to everything else.” 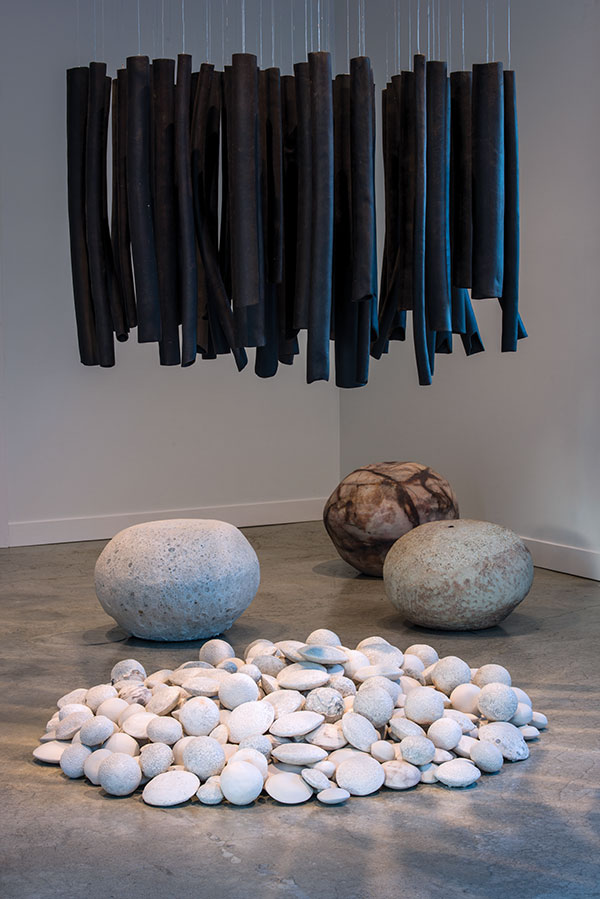 It is no accident that Dickie has chosen to eschew all but natural colors in her clay work. The surfaces, shapes, and colors are influenced by the remote natural landscapes she has hiked in or paddled through on 6- to 60-day trips in the Yukon, North West Territories, and Nunavut in Canada’s north and while traveling in Iceland, Peru, Chile, and China. The oranges of lichen represent the passage of time as that combination of fungi and algae takes decades to assert itself in the north. Her aesthetic “is based on preserving the visceral qualities of clay—its rawness, earthiness, rough tactility, timelessness, and organic imperfections.” The stillness Dickie finds in remote landscapes allows “the surrounding space to act as a conduit for the subtle vibrations of being alive.”

The 7-foot-tall, buff, totem-like work she created in 2004 for the Klondike Institute of Art and Culture caught the eye of fashion house Louis Vuitton 15 years later. They asked Dickie to create and install a series of the same work in their flagship store in Boston, Massachusetts. She says, “I didn’t understand why they wanted such earthy, organic work in their store, but once I arrived, I understood that they were creating a warm, textural backdrop to juxtapose against the extremely high-polished merchandise.” In the same way, she finds inspiration outside of her chosen medium; Dickie greatly admires Canadian born, American Minimalist and Abstract Expressionist painter Agnes Martin’s subtle use of color and line. 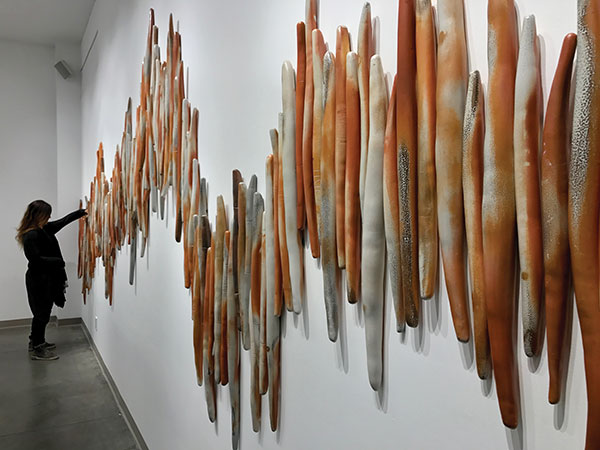 Though her work isn’t directly influenced by other clay artists, it is evident that Dickie’s art is part of the greater contemporary ceramic whole. Other abstract installation artists explore concepts that intersect with Dickie’s. Sarah House, based in New Orleans, Louisiana, also references the natural world in her conceptual installations while enticing her audience to feel in her words, “connected to something greater than themselves.” Her structures installed on walls, from the ceiling, and on floors (like Dickie’s) are created in multiples and are vehicles to explore our place in the broader world, spatially and through a suggestion of the passage of time. The micro components of the installations inform the macro scale of the projects in both artists’ work.

The hanging components—over 1000 cupped porcelain pieces suspended by filaments from the ceiling in a 7-foot half sphere—in Dickie’s Holding Space, sway with air movement, exuding an energy that charges the space around them. As Dickie describes, “this emptiness can either be experienced as a void, as nothingness or as unbounded potential.” Space is also explored in the way the distinctly feminine figures seem to interact with each other in another facet of Holding Space and in Kristina Rutar’s installation work, Alma Mater. Absence being as important as presence is inferred. The negative space between the sculptures creates a sense of tension and movement. Rutar’s forms feel both futuristic and prehistoric, thus transcending time. The overlap of concepts between the work of Rutar, an assistant professor at the Ljubljana Academy of Fine Art and Design in Slovenia, and Dickie is based in the feminine, with space informing time. 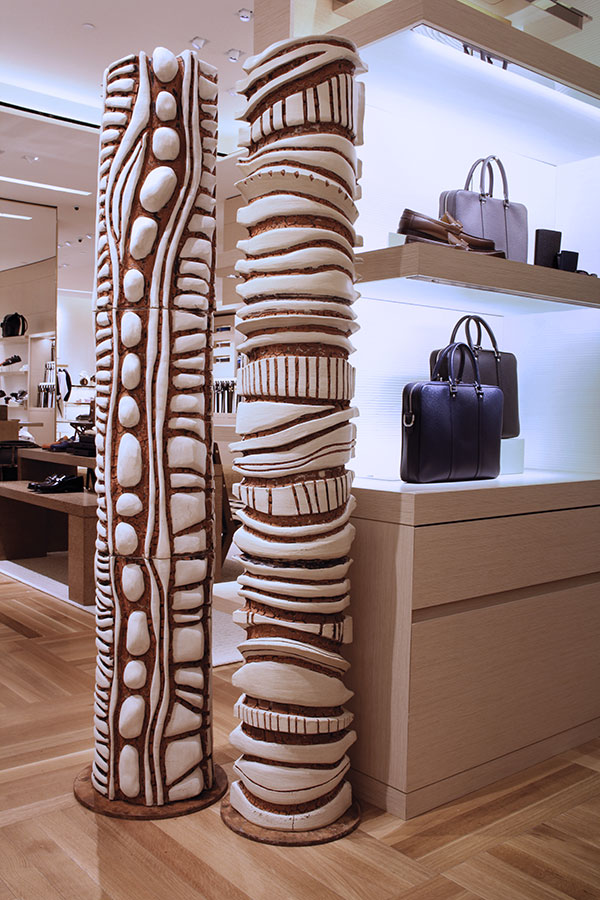 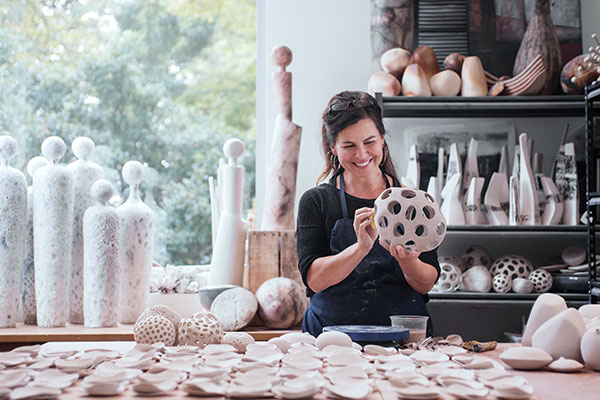 Dickie can trace her exploration of space back to her feminist studies at university. Then, what was a more demanding taking of space has mellowed into an investigation of how we occupy space relative to ourselves, others, and the world. Her last three exhibits are a culmination of all her earlier work along with her ongoing interest in neuroscience and how we can change our brain chemistry to unplug and be in the moment. Ironically, in the age of digital connectivity, it’s Dickie’s ability to avoid social media and focus inward that keeps her connected to the greater conceptual ceramic world. She works at home the way she has at many past residencies, immersed and focused on the larger concepts embedded in her exhibits while tirelessly creating the components that make up the whole. She continues to seek out wild places to fuel her ever-evolving ceramic career, making sure we haven’t felt the last of Samantha Dickie’s influence and immersive artistic offerings.

Samantha Dickie is a West Coast–based Canadian ceramic artist. Over the past 15 years, her practice has included attending various residencies, receiving national and provincial grants to create large-scale conceptual projects for exhibition in public galleries across Canada, as well as teaching workshops and presenting at provincial conferences. Additionally, her work can be seen via commercial commissions, permanent public gallery collections in Canada, and gallery representation in British Columbia and Ontario.

the author Kimberley Hyatt is a writer and artist living in Nelson, British Columbia, Canada. She completed a BFA in English at McMaster University in Hamilton, Ontario, and attended the Kootenay School of the Arts in the clay program. You can find her content writing business at www.hyattwordcraft.caand her whimsical ceramics and sketches on Instagram @hyattkimberleyand Etsy at KimberleyHyattStudio .