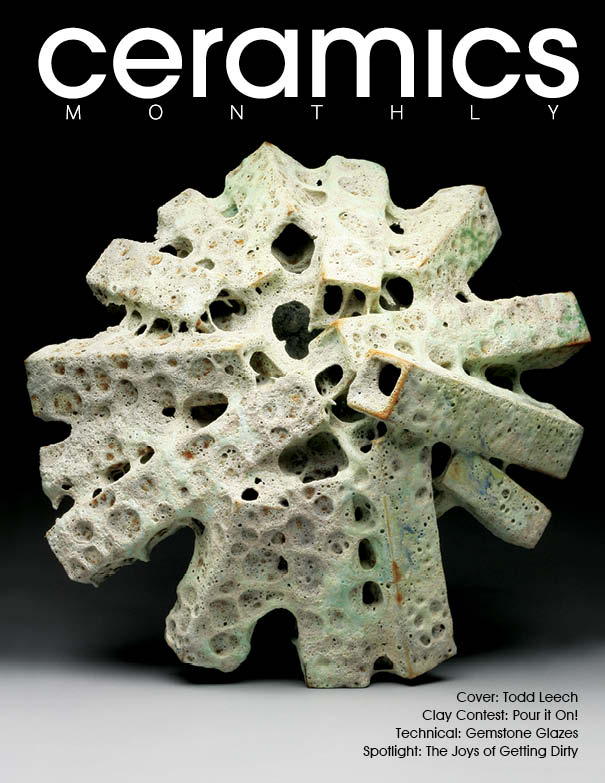 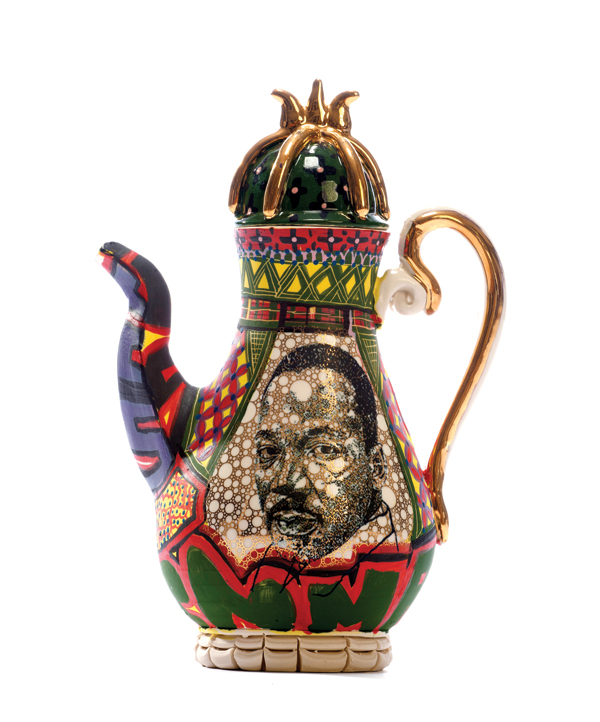 The most insidious response to racism is indifference. It does not manifest itself in brutal beatings, malicious rants in cyberspace, anonymous acts of intimidation under the coward’s cloak of night, or perverse manipulation of the legal system. Indifference declines to engage in such demonstrably immoral acts. Nevertheless, by its very nature—its disengagement from the moral imperative to condemn injustice—indifference is the great enabler of such immorality. As Roberto Lugo, artist and assistant professor at Tyler School of Art in Philadelphia, Pennsylvania, observes, indifference to injustice lies but a hair’s breadth from the dismissive attitude “that certain lives are less valuable than others; certain lives don’t matter.” This idea, once rooted in a social system, ensures that even the most heinous of discriminatory acts will fail to elicit universal condemnation. At its worst, it can even normalize such behavior. 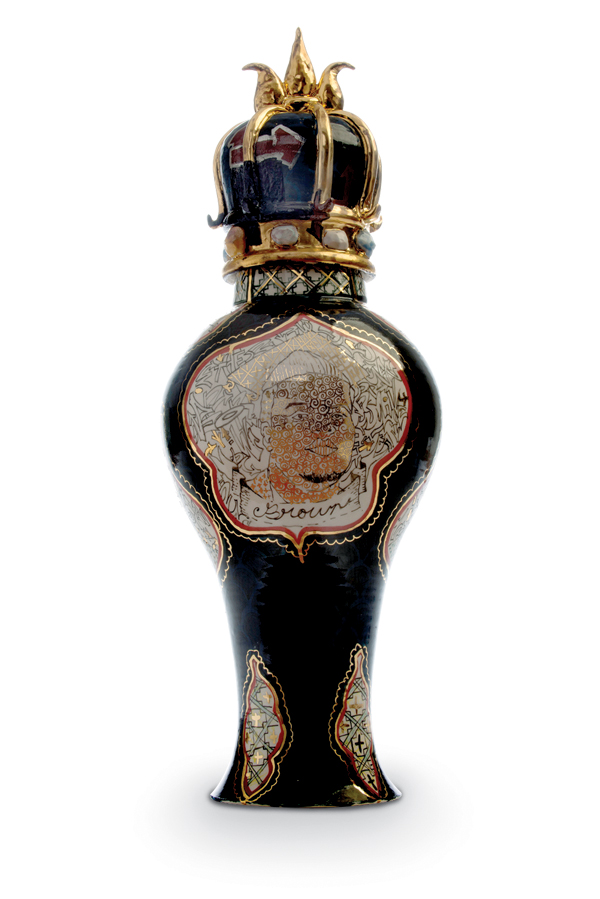 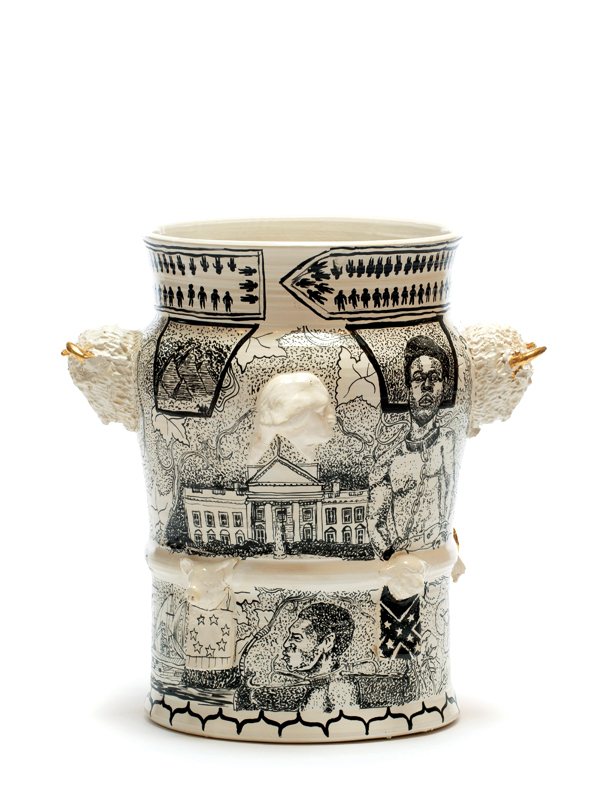 Lugo, who grew up the son of Puerto Rican immigrants in a poverty blighted neighborhood of Philadelphia, had reason to rage against indifference. Resentment might have driven him down a tragic path had serendipity not brought him art as a purgative for pain and a potential means of promoting positive social change. Although the scarring conditions that he encapsulates in the phrase “where I come from” are unforgettable, he does not accuse, berate, or shame those indifferent to social injustice. Rather, he seeks to convince the redeemable that all human life has value by employing his art to spread the exalting credo, borrowed from rapper KRS-One, that “we are all kings.”

Sometimes Lugo stresses this message bluntly, placing gilded crowns atop richly decorated porcelain vessels with portraits of individuals of color whose deaths under violent circumstances have come to epitomize the ugly inadequacies of the American ideal of justice for all. The We Are All Kings urn, for example bears a portrait of African American teenager Trayvon Martin, who was notoriously pursued, confronted, and shot to death in 2014 while walking home from buying candy at a Florida convenience store. Lugo’s urn does not refer to the incident itself, nor does it offer direct commentary on such contentious issues as racial profiling. The regal serenity of the lustrous red, white, blue, and gold vessel and the quiet portrait of the dead teen that adorns it are in themselves sufficient to convey Lugo’s message about human life: recognizing the nobility in every human being is the first step toward undermining indifference, and that, in turn, is the first step toward eradicating injustice.

While the coronation of his portrait vessels effectively indicates the elevating intentions of his art, Lugo’s crowns are more than convenient symbols. Their autobiographical significance is at least threefold. They recall gaudy crown-shaped dashboard air-fresheners popular in his neighborhood in the 1990s (which in wealthier districts were quickly, and falsely, disparaged as symbols of Hispanic or African American gangs). They also reference Lugo’s childhood exploits as a graffitist who, like his brother and cousins, ostentatiously tagged walls with a crown atop his name. In his work as a potter, he has essentially retooled the graffiti crown’s implications of self-assertion to emphasize the existence and value of people of color whose wrongful deaths have met with an astounding and indefensible degree of indifference. 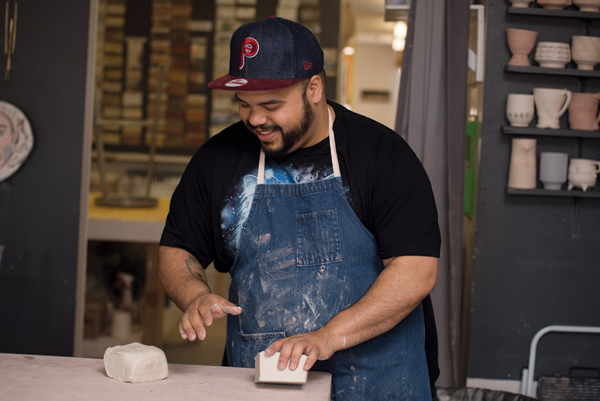 The crown acquired a third autobiographical reference during Lugo’s studies at the Kansas City Art Institute when he was asked why his work routinely included Jean-Michel Basquiat’s “trademark.” For art historians, Basquiat’s meteoric career following the Times Square Show epitomizes both the excesses of the bullish New York art market of the early 1980s and the tumultuous emergence of identity art at the end of the decade. For Lugo, discovering Basquiat was both inspiring and reassuring. “I had been referencing him the whole time and didn’t even realize it,” he remembers. “I did some research on Basquiat, just looking at images, and really fell in love with his story. He was half Puerto Rican and half Haitian, which is one of the things that excites me about his work.”

The exhilaration Lugo experienced in discovering that the art world was, after all, diverse enough to include an enormously successful artist whose identity partly mirrored his own, inspired him to inform other Americans of color about creative geniuses to whom they could relate. The result was a series, of which the Celia Cruz-Basquiat Teapot is exemplary, in which Lugo has paired portraits of visual and recording artists to suggest bonds of community. “I often try to connect people of color because there are so many ways to separate us,” he explains. “I grew up around black people and have African ancestry myself. The Celia Cruz side of the teapot came out of wanting to make my work accessible to my own family. I reference a lot of civil rights activists, but I also like to think about people like Celia Cruz, whose Cuban background was a substantial part of who she was, even though her music was well-known even to non-Spanish speaking people.” 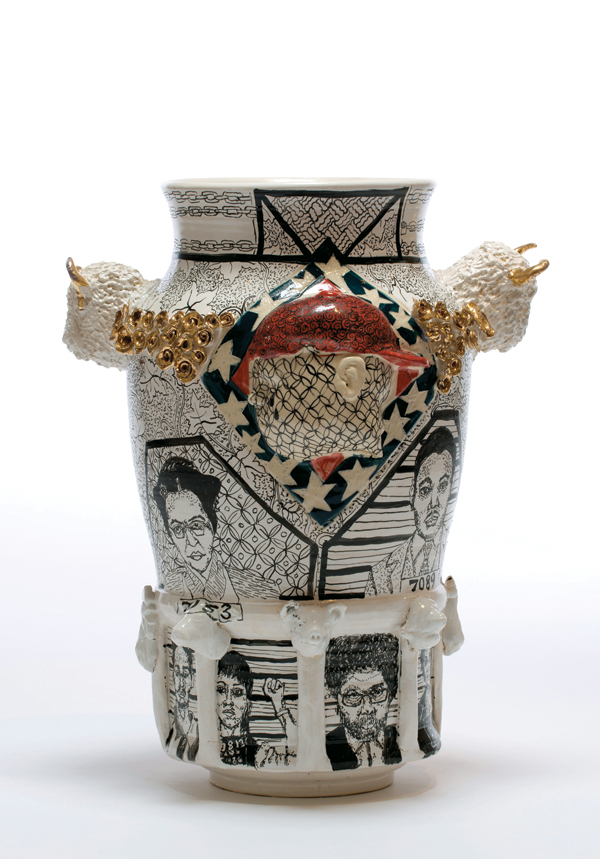 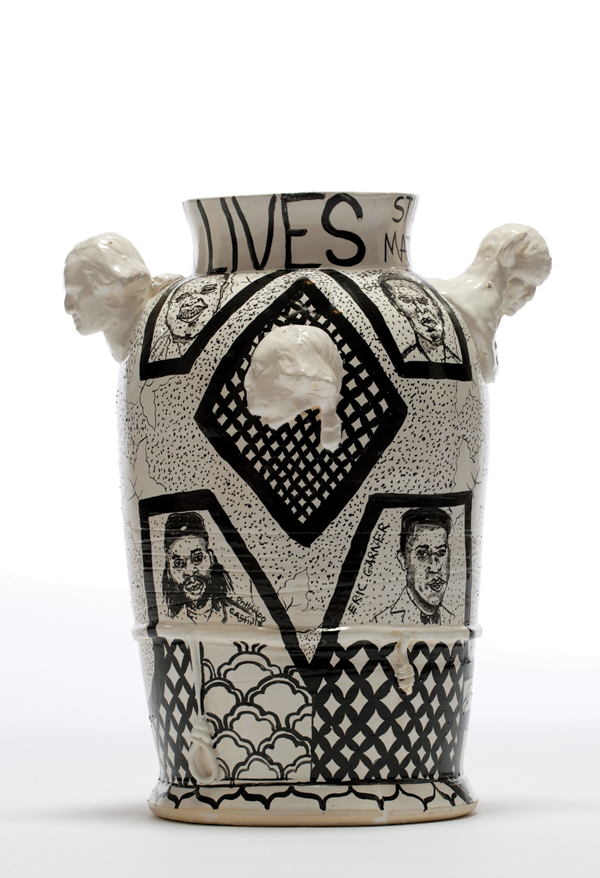 Lugo’s teapot-based celebrations of such artists and performers as Cruz, Basquiat, Prince, and Odetta clearly reflect his own early drive to be recognized and appreciated as a person rather than dismissed as a stereotype. The broad, flat spouts of his teapots bear the tag names, Robske and Maz, that he and his brother employed in their youth as graffitists, as well as the name Ask, which he conferred on his wife when the two began collaborating as artists. These are straightforward, even raw, declarations of identity, but Lugo also explores the more subtle assertions of self that art makes possible—above all the development of personal style. That, too, has involved reflection on his roots. “I started out tagging as a graffiti artist,” he says, “and I don’t want to lose that. A lot of the things that I do are gestural, but I also choose places to be tight.”

Decisions about form in Lugo’s works often complement choices about content, including references to the history of ceramics. The teapots deliberately conjure associations with 18th-century European porcelains—through, for example, their delicate white handles with gold-luster embellishments and scroll terminals—but they also cloak themselves in vestments of bold colors and patterns more akin to those of African fabrics. The most important historical reference in Lugo’s work has been to a vessel designed by Karl L. H. Mueller for the Union Porcelain Works in Brooklyn, New York, in 1876. Known as the Century Vase, this centennial symbol of American achievement—with its gold luster, its bison heads alternating with George Washington portraits, and its vine-bordered vignettes of colonials and pioneers—is a bombastic acclamation of national history—though a history that is as notable for what it omits as for what it celebrates.

When Lugo first encountered the Century Vase in 2012 he found himself mentally filling in the vessel’s metaphorical blanks. “Being a Puerto Rican American,” he recalls, “I tried to think about what that experience looked like over the past 100 years. At the time, my brother was incarcerated, and so I was really thinking about how he ended up there and I ended up in graduate school. What has been the Puerto Rican experience that I’ve seen with so many of my cousins and so many of the people that come from where I do? Why do they find themselves in prison?” These questions sparked one of the key works in Lugo’s Century Vases series: A Century of Incarceration. 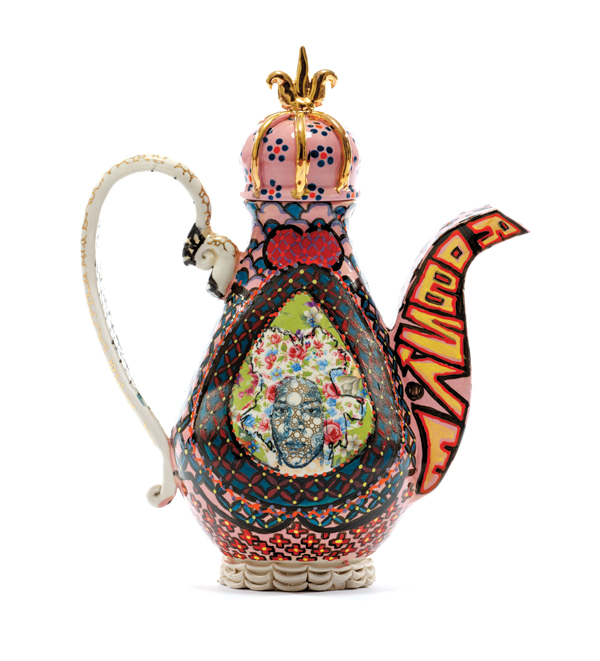 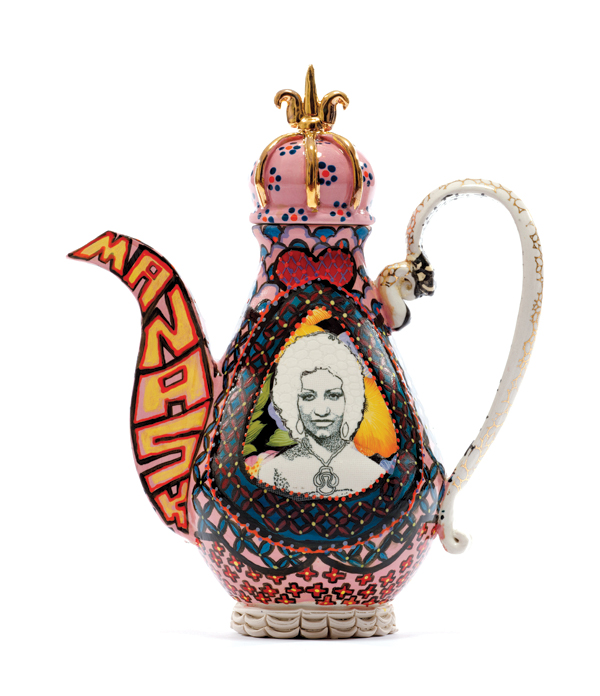 Featuring a profile relief portrait of Lugo wearing a backwards baseball cap—a reference to a pottery workshop attendee’s confession that she was afraid to approach him because of his “scary” appearance—the Incarceration vase situates mug shots of arrested civil rights leaders in a context that invites the viewer to reflect on assumptions, indifference, and fear. “I have Martin Luther King on there,” he explains, “but also a mug shot of Frank Sinatra [charged with adultery in 1938]. I think to someone who really admires Sinatra, the image of him being in prison might seem cool and give him street credibility. He doesn’t strike the same fear that a black man does in the heart of popular culture. I like to put those sorts of images together—someone who’s not feared and someone who is—on the same work, so that people can see we’re really not that different.”

Lugo’s works might seem quixotic given recent events. The idea that “we’re really not that different” has been badly pummeled of late by ugly and divisive rhetoric seeking to make a virtue of injustice. The depressing evidence that racism remains deeply ensconced in American culture is too blatant and widespread to deny. On the other hand, Lugo has never sought to cure minds infected with hate or to rail against their iniquity. Rather, he seeks to rouse the conscience, latent yet living still, in those disposed to indifference. To do so, he avoids proselytizing in favor of a simple human-to-human connection. “If any of my works seem political, that’s inadvertent,” he asserts. “All stories are really complicated. I’m just hoping that through my work you can put yourself in the shoes of these folks and recognize that their lives mattered too.”

the author Glen R. Brown, a frequent contributor to CM, is a professor of art history at Kansas State University in Manhattan, Kansas.