Appears in the April 2018 issue of Ceramics Monthly. 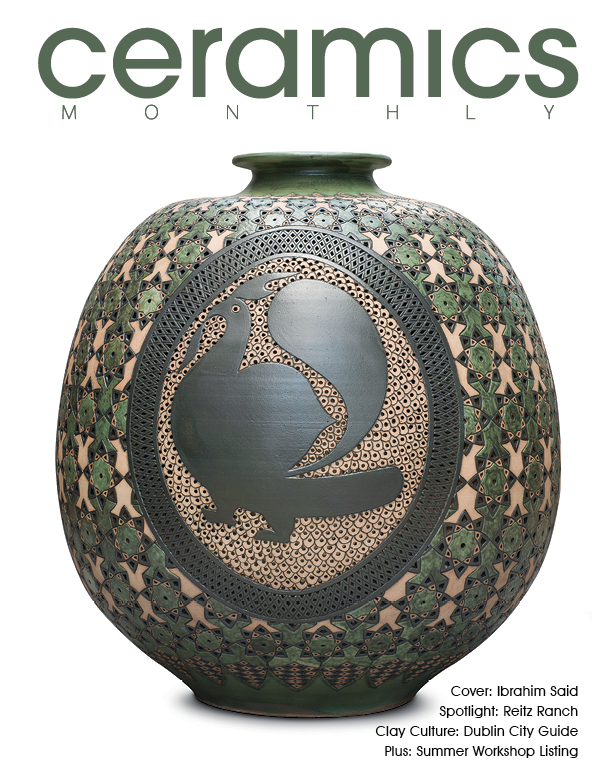 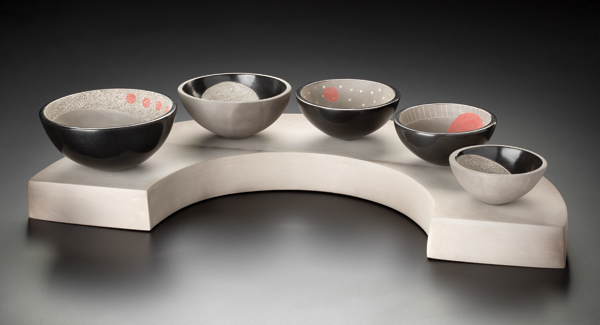 In the cult of primitive ceramics, reverence for organic, unpretentious simplicity and a rejection of industrial precision runs high. The fundamental appeal of a charmingly irregular pinch pot, or the smoky mystery of carbon trapping on a ceramic form—a sort of atmospheric fossil trace—is hard to deny. Meanwhile, the sophisticated elegance of the contemporary fine craft world often places refinement, clean lines, and complexity of technique above all else. Paula Shalan’s work lies somewhere in between, with a conscientious elegance and cerebral beauty made all the more appealing and substantial by the direct simplicity of her technique, with forms and surfaces deeply rooted in her observations of the natural world. 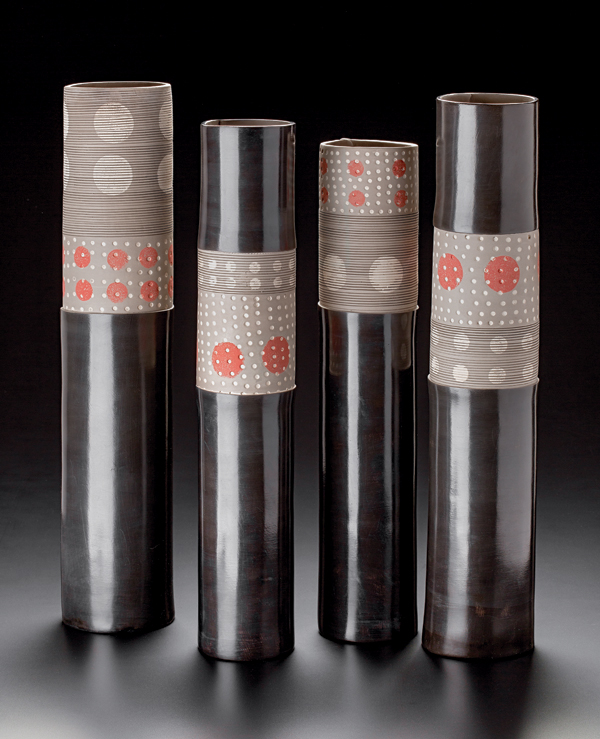 Rooted in the Natural World

Shalan’s signature is a highly refined smoke firing of white terra sigillata coating a soft, matte white clay body. Often burnished to a high sheen, Shalan contrasts the shiny terra sigillata with slips (often used as a wash to fill in textural details), or allows the raw clay body to absorb carbon to varying degrees. Seductive textures and surface treatments give the work a visual sophistication and tactile complexity, through processes that are, in essence, as old as the human relationship to fired clay.

All of Shalan’s works are handbuilt using simple coil and pinch techniques or thin slab construction, finished with an array of contrasting textures achieved with the most mundane tools. She uses fettling knives, ribs, a dull serrated kitchen knife, combs, and lengths of cord. Softly stippled passages suggest the texture of wool, smooth surfaces suggest the reflective quality of water or polished stone. The end of a paint brush produces a neat, pin-pricked dot pattern with reciprocally organic bubbles or ruptures on the other side of the soft clay wall, commemorating its wet malleability in the durable hardness of its fired self. 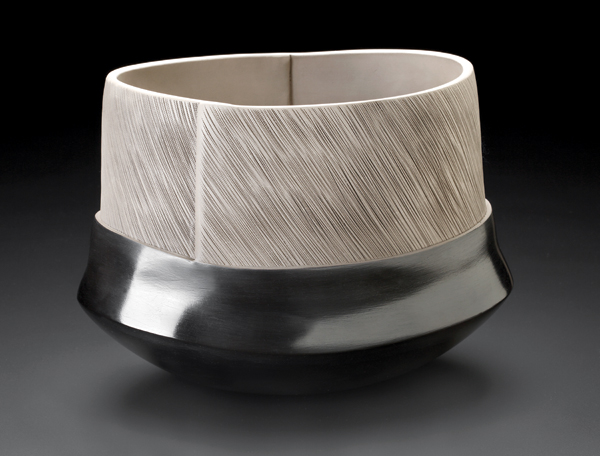 Her forms are straightforward: organic cups with wavy lips and engraved surfaces; tall, irregular cylinders banded with engaging textural patterns; closed forms that suggest geodes, mushrooms, or exotic seedpods; elegant bowls and cups. She emphasizes clarity of construction, the distinction between underlying structure and surface design. Straight-sided bowls come together at obvious, even explicit seams. Graphic elements float over shifting textural fields, suggesting a landscape, or the surface of the moon. More accurately they suggest the reflection of the moon on the earth’s varied surfaces: Shalan created a whole series derived from moonlight on Berkshire barns, images collected on evening walks. She is interested in the dynamic interaction of objects. Groups of bowls and cups are presented formally on platforms or bases that are increasingly integrated into to a coherent scheme of form and surface design. 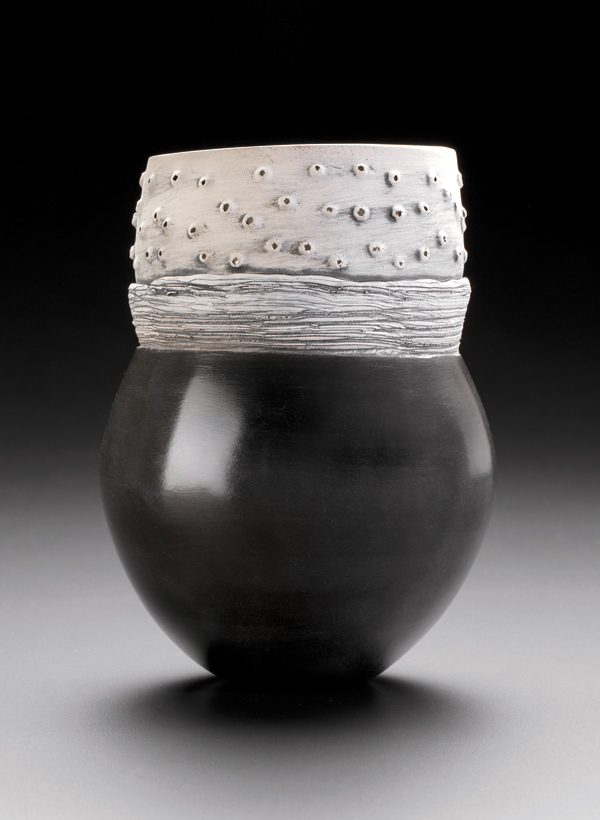 Rooted in printmaking, drawing, and painting as an undergraduate student, with side trips into jewelry making and sculpture, Shalan originally avoided ceramics—in part because her mother was a ceramic artist, and she wanted to blaze her own path. Yet after enough moments of facing a blank canvas, questioning the authenticity and substance of her painting impulse, Shalan ultimately embraced ceramics for its fundamentally grounded nature, its capacity for both utilitarian and purely aesthetic expression. Working through basic ceramic forms—including bowls, cups, and covered boxes, as well as wall-oriented works more typical of fine-art presentation—she has refined both her modeling and surface procedures to respond to a broad-based artistic vision, primarily by stripping the process down to the bare essentials. Her thoughtful approach is based on controlled experimentation and a defined set of options. Her limited use of color involves simple slips and commercial underglazes, mixed and blended to create a nuanced palette developed through lots of experimentation with the ways different formulas can (or can’t) be mixed and how they interact with the smoke. But typically, she says, “I like narrowing my choices down to just clay and smoke, and pushing it in a limited set of directions.”

The result is a body of modern, exquisite objects that bear the mark of primal techniques. Her choices are determined in equal measure by tactile intuition and an intellectual process of analysis and elimination. Typically prized for its relatively variable atmospheric effects, Shalan has harnessed the primal richness of smoke-firing, collaborating with it to create a remarkably controlled and consistent range of surfaces. Using a range of simple techniques—sand and wax resists, foil as both a mask and a saggar when wrapped around newsprint—Shalan has gone to great lengths to refine and normalize what can be a wild-card technique. 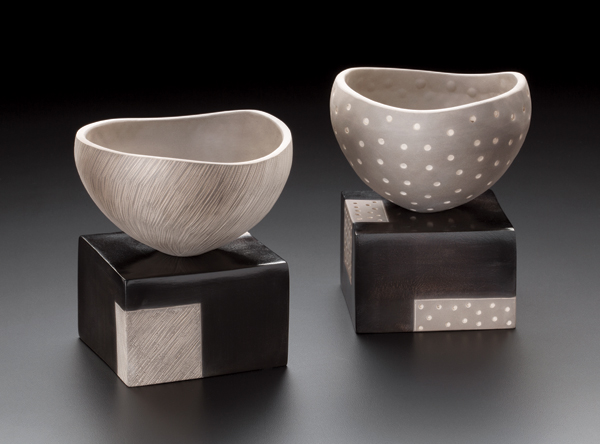 Aesthetically, she is interested in the distinction between dark and light, interior and exterior, matte and sheen, smoothness and texture, curves and straight lines. The most recent works are particularly driven by her interest in a complex graphic scheme, achieved through increasing control over the smoke-firing process, carefully directing where and how much carbon is absorbed into the varied surfaces of her elegant objects. Deep, glossy sheens ranging from warm browns to rich blacks contrast against white mattes with just a hint of smoke to reveal texture, lines, creases, and articulations. Some works approach a range of tonal and textural refinement on par with the delicacies of printmaking. The surfaces recall the velvet inkiness of mezzotint, the grainy depth of aquatint, or the scratchy appeal of drypoint.

Shalan’s mastery of texture is the bridge between the matte white clay and the richness of her shiny surfaces. “I love the responsiveness of clay,” says Shalan. For all her refinements, she still appreciates the subtle traces of brush marks, drips, and scratches revealed by her highly polished, terra-sigillata surfaces. She incorporates patches, seams, and other signs that reveal both the construction of the piece and the work of human hands on otherwise pristine objects. The organic quality in her work reveals her interest in softness and movement, the sometimes languid, sometimes abrupt fluidity of natural phenomena, and the sensuality of the medium. 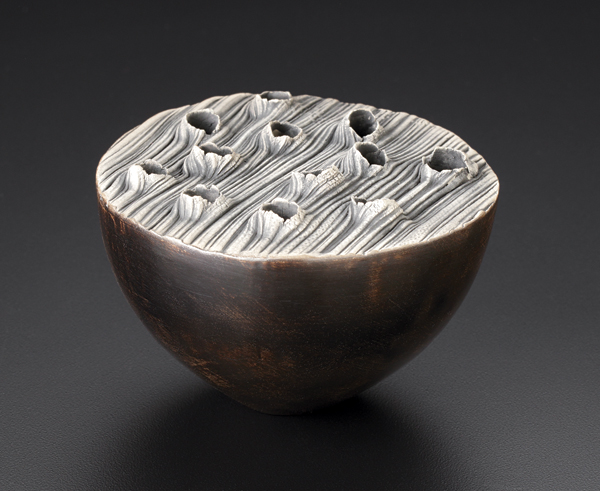 Revel in the Beauty of Nature

Indeed, for all the controls she exerts, her work is ultimately about the underlying structure of nature, as expressed through its myriad organic forms. Raised on several acres of woodland outside of Boston, Shalan grew up inspecting the world around her—trees, insects, plant growth. Now living in Stockbridge, Massachusetts, Shalan continues to revel in the natural beauty of the Berkshires. “I spend a lot of time looking really closely at the minutiae in nature,” says Shalan, “hours looking at how things are joined together.”

Shalan credits two residencies, both in stunning natural areas, for shaping the current trajectory of her work. Working as an artist in residence at Maine’s Acadia National Park in 2013 and at the Dune Shacks on Cape Cod in 2014 prompted a number of works that explore both the naturalist’s eye for direct observation and an artist’s tendency to distill those observations into formalized elements. Many of the cylinder forms were inspired by birch forests in Acadia, from the overall impact of the mass of trees down to the black etched lines of the bark. The textures and colors in a group of small, closed, highly textured objects recall her inspection of the underside of mushrooms and fungi. Recent forays into color come from shells, plants and the beach environs at Cape Cod. A series of bowls inscribed with peculiar sgraffito constellations are specific, graphic notes on botanical structures and articulations. Signs of growth, disease, insect burrows, and woodpecker holes are all funneled down to a visual abstraction.

The irony is that these two residencies, which heightened her sense of the natural world, ultimately prompted a shift from earthy expression to a more refined style, with emphasis on surfaces and graphic possibilities. Much of the new work incorporates textures and colors internalized at the residencies, paired with her long-standing love affair with graphic media. Shots of color are printed on top with a sponge or applied in gestures more typical of painting and drawing. Forms are increasingly spare. Simplicity is achieved through a distillation of complexity.

One is tempted to find historical linkages: in her earthier works, a reference to ancient Chinese house effigies, ossuaries of the ancient Near East, or the dark textural appeal of West African pots. Shalan’s works have been likened to contemporary masterworks from Mata Ortiz, or the nearly metallic barro negro of Oaxacan dung-fired earthenware. Yet it doesn’t really fit any of these categories. The newer, more refined works might suggest the formal elegance of Japanese graphic design, recalling the classic dual impulse in Asian ceramics: one foot in the sophisticated, decorative tradition, another in the camp of earthy, rough, natural forms and surfaces. Shalan has found a way to incorporate both impulses in a coherent, integrated style that honors both the natural world and the human impulse to make sense of it. 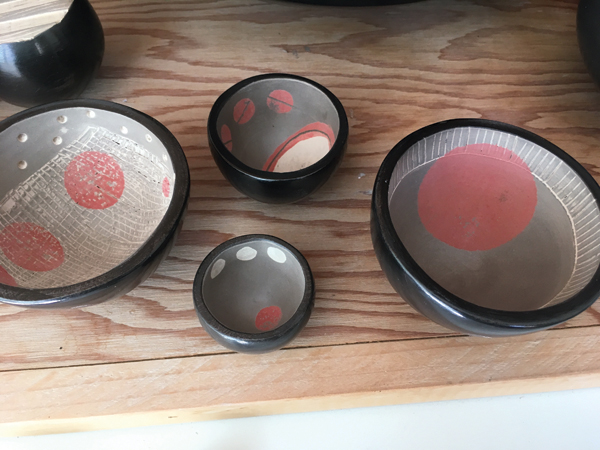 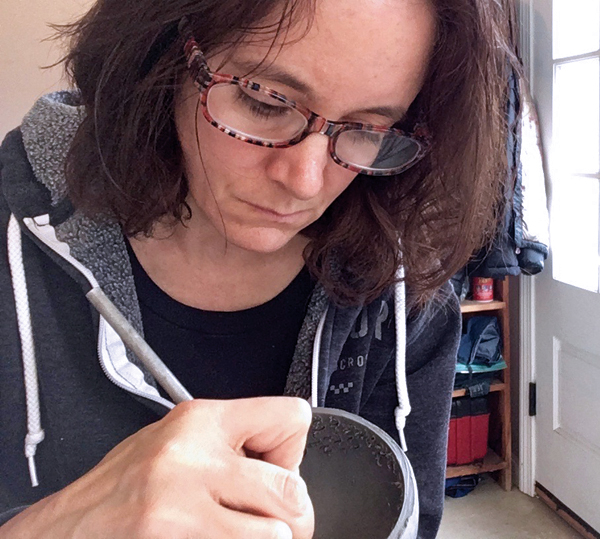 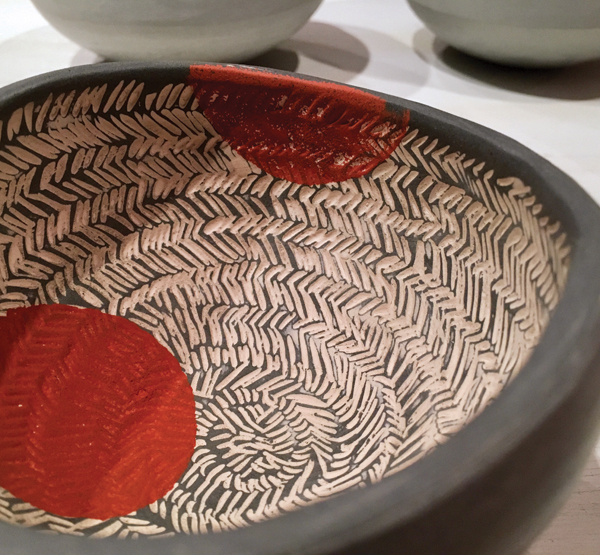 After rolling out slabs for wall pieces, boxes, and cylinders with a rolling pin, texture is added while the clay is still very soft (2); cylinders are decorated while still flat, then formed around plastic tubing. Underglazes are applied before and after carving, depending on the desired effect (3).

Wearing a respirator, she smooths the surfaces at the bone-dry stage with increasingly fine sanding sponges. Shalan then applies 5–6 coats of a thin, homemade terra sigillata (4), and polishes with a plastic bag wrapped tightly around her finger for maximum sheen (5). 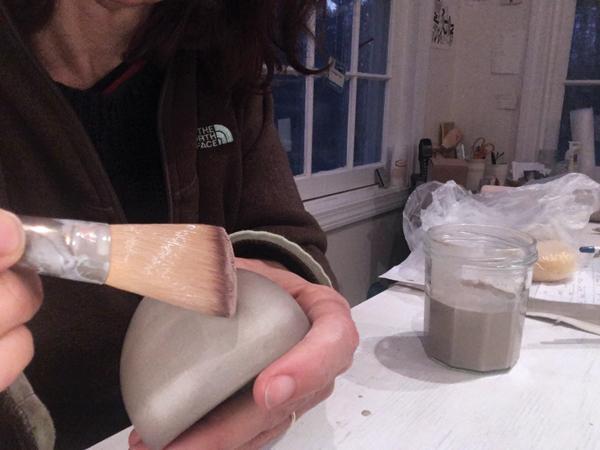 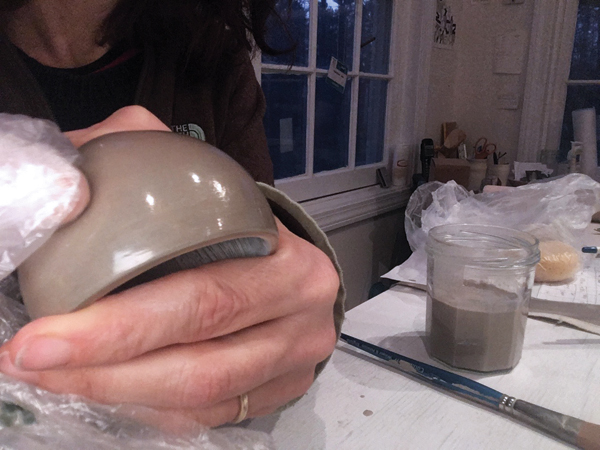 She uses a combination of wax and other resists, including sand-fill (partially burying a vessel in sand or filling it with sand to mask areas in a sawdust/smoke firing) and other masking techniques, in both decorating and firing. Additional colors—homemade slips or commercial underglazes–are sponged or painted on for graphic effect. 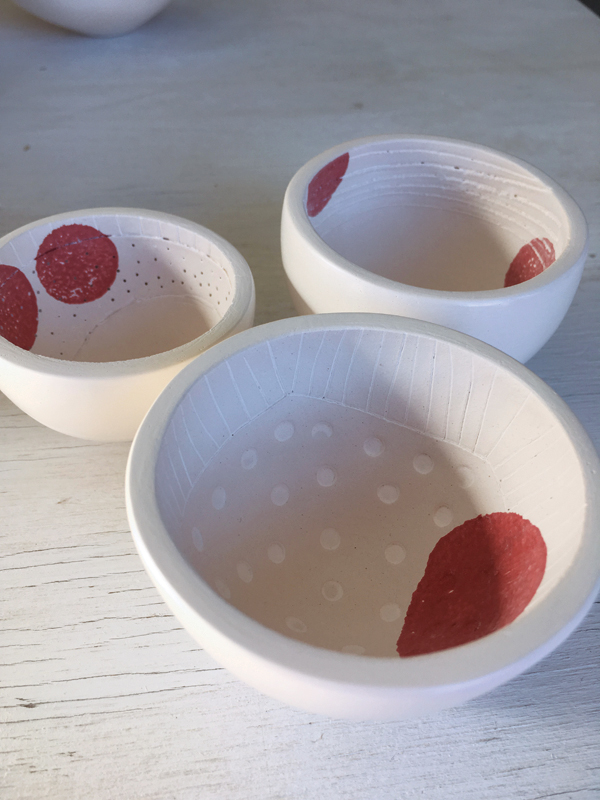 The terra sigillata fires white in the cone 08 bisque firing in an electric kiln (6), turning black in the smoke firing. For some pieces, she uses newspaper as a combustible within a foil saggar to trap carbon evenly (7).

The works are packed in a traditional brick pit, and fired with a mix of cast-off hardwood chips from a local furniture maker. For those pieces placed directly into the wood shavings, the low resin content creates a smooth surface, and the mixed woods make for a wide range of tonalities in the finished brown-to-black surfaces. Packing the works tightly in the wood chips minimizes oxygen in the firings, which range from 12 to 36 hours, depending on the wood mix and how tightly pieces are packed in the pit. Once the work is cool, she removes the loose pots and unwraps those in foil to reveal the effects of the firing (8). 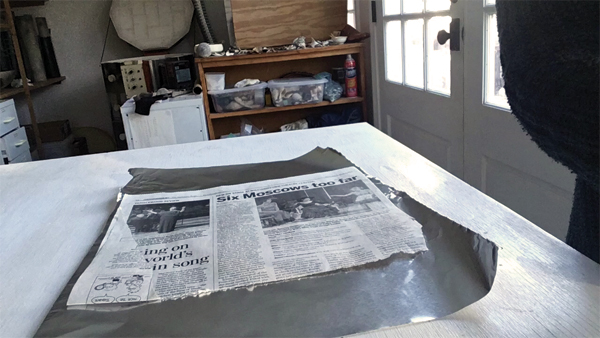 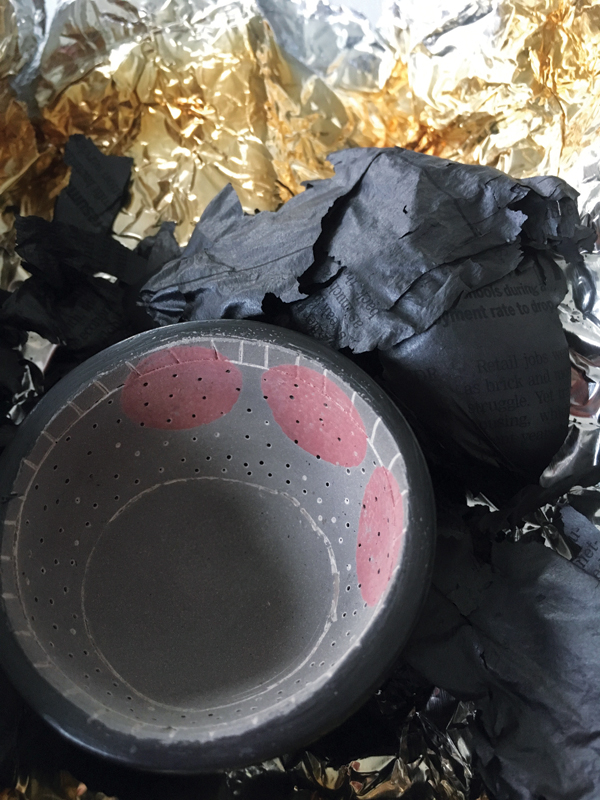