Movement and Tranquility: The Work of Cathi Jefferson Katey Schultz 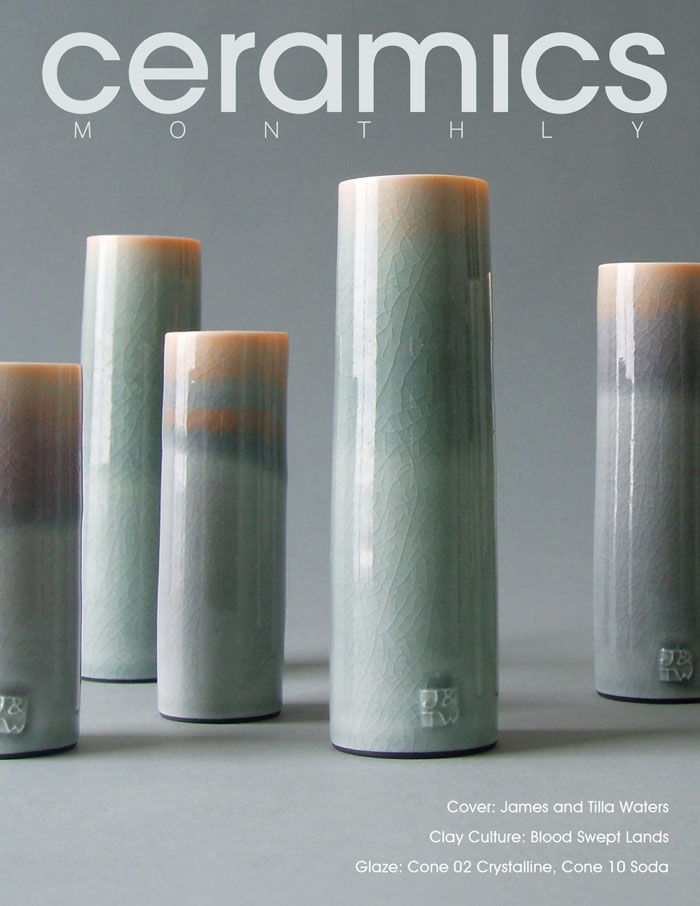 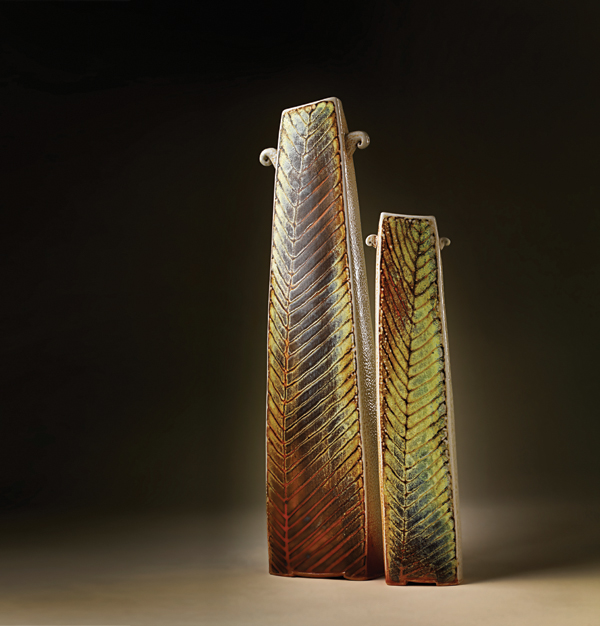 When Cathi Jefferson walks through the old-growth forest a few hours from her Cowichan Valley home on Vancouver Island, British Columbia, she’s utterly attuned to the movement of the natural world. Epic Douglas fir and cedar trees tower overhead, branches so far above it is as though they dangle from clouds. At ground level, trunks as wide as 50 feet around come out of the ground apparently without effort. Of course, nothing about old-growth trees is effortless; each growth ring a dark scar of hard-earned nourishment and survival. As easy as Jefferson makes an artist’s life appear, I’d venture to say hers isn’t effortless, either. There is a quiet patience to her demeanor that translates into her work and it’s no wonder where that comes from. But what I find most powerful about Jefferson’s synergy between a life lived and a pot thrown (or a piece hand-built), are the ways each pays tribute to movement and tranquility.

A Canada native, Jefferson has maintained a full-time studio practice for 40 years, the majority of that time from her own home and nearby woods she frequents. Taking early inspiration from teacher Herman Venema (also from British Columbia), years of personal study, and trips to Japan, a triumverate of influence has stacked together to powerful effect. “Japanese historical pottery has always been a strong influence for me,” says Jefferson. “The simple, strong forms carry a sense of history and imperfection that reflect the importance of using well-crafted, handmade objects. You live with these objects. You eat and drink from them, and they improve the quality of your life.” 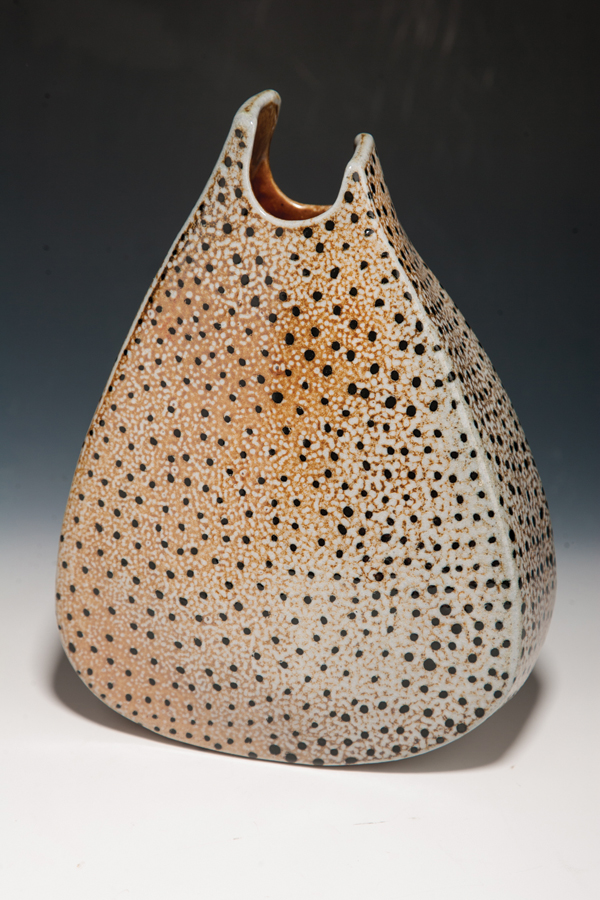 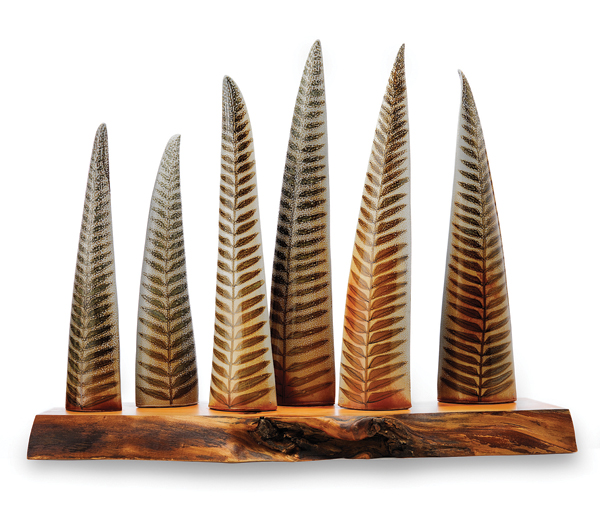 Jefferson’s functional pieces include yunomis, wine cups, latte cups, mugs, plates, olive dishes, asparagus dishes, sauce dishes, spice jars, colanders, serving bowls, lidded serving dishes, gravy boats, and pitchers. Salt fired and slip glazed in natural tones, most bear the mark of her unique nature-inspired surface designs and patterns—paper money leaves peppered across a vase, fern designs wrapping around a cup, or Japanese lantern leaves brushed across a jar. Some objects are presented in pairs or triptychs, intentionally set atop a thick board of salvaged arbutus wood. “Arbutus trees are the most amazing trees,” says Jefferson. “They grow in a very narrow and specific range; something like only 17 miles from the ocean and just halfway up Vancouver Island. These trees are being affected by climate change and pests and, so far, there are no solutions on how to heal them.”

When asked about paying homage to the natural world, Jefferson wholeheartedly acknowledges that is her deepest hope for the work. Other than a brief series of slab tombstones and a breathtaking installation (Reflecting Nature: Reflecting Spirit, 2007) partially funded by the Canada Council for the Arts, it’s safe to say most of her work shies away from pessimism, lament, or pointing fingers. While Jefferson feels the loss of our forests and ecosystems on a deeply personal level, she strives to make her work focus on the opportunity to reconnect with nature. If we can reconnect, we have something to work from, a way to remember our best selves. Without that, where would humankind even begin? “Nature connects us with what’s really important,” she says. “We have nothing without the natural world.” It takes a certain personality and way of engaging with the world to transform pain and disappointment into positive connectivity, and whether delighting in the graceful, playful stacking of her spice jars or marveling at the wide-top balance of her native plant vases, it’s clear the artist has achieved just that. Goldy-greens and rusty orange tones are presented in various shades, mirroring the passage of time from fresh spring leaves to late fall duff. Wide openings hovering above narrow bases suggest the expansiveness of a tree, while maintaining balance and functionality. Like the stately forests around her, there is tranquility to the work in both form and surface design. 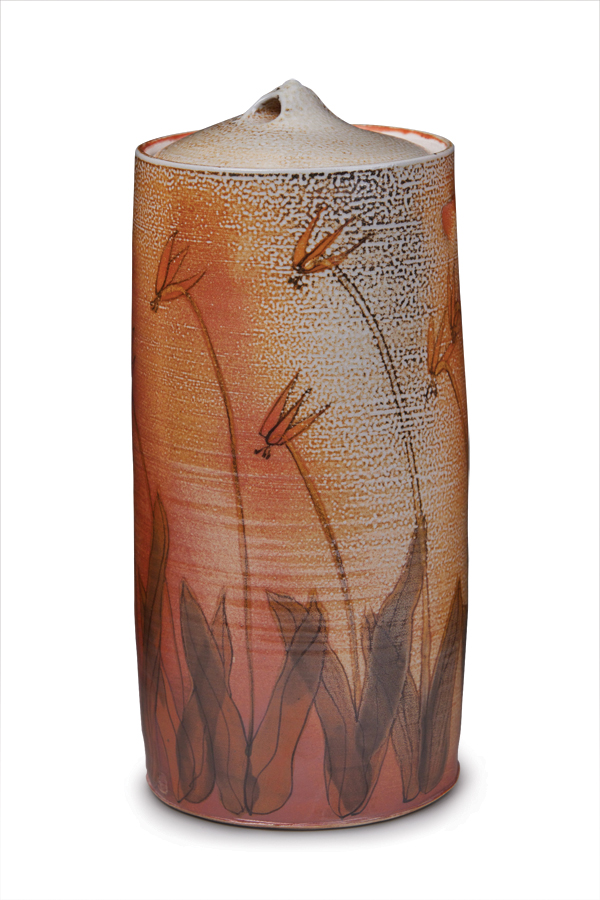 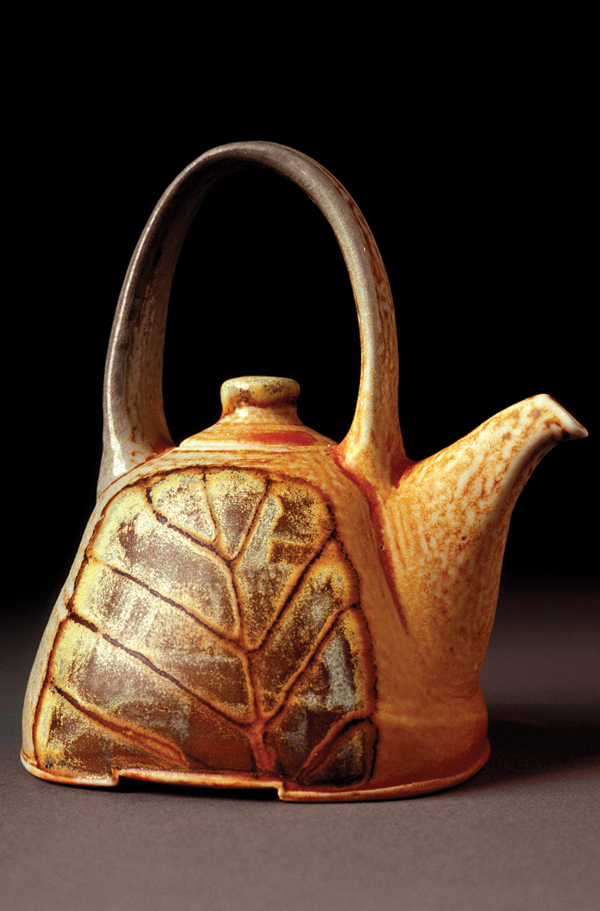 Perhaps more than any other work, Jefferson’s most recent sculptural series of Raindrop Vases epitomize the spirit of her creative process. The idea came to fruition during her most recent trip to Japan in October 2013. Awarded a paid, collaborative residency and conference called Ota Artist in Residence (OAIR), she met with one Korean and two Japanese artists in Ota, a subdivision of Tokyo. Collaborating with metalsmith Teruo Takahashi, the two discussed the Buddhist conception of circles and created several mixed-media pieces. From these interactions, Jefferson put together a handful of aesthetic challenges and inquiries she’d been pondering for a while, designing her first Raindrop Vase. “I see any work in a series as an opportunity for growth. You start with something and see where you can take it . . . if it keeps engaging you, you keep doing it because there’s more to learn.”

“If you think of a raindrop,” Jefferson continues, “it’s round on the bottom, so the form sits on a round curve, the angles vary, each piece different from the other—as it is in nature.” Working with large slabs that come together in smooth seams and a narrow opening near the top, the hint of a circle remains in the overall form but there’s also something more—an opening, a chance for change, a way out. The surface design consists of tiny, concentric dots modeled after an antique Russian seed sifter Jefferson kept in her house for decades. Working with the pattern, she realized she’d also seen it on a silk-screened dress she owns. The pattern likewise evoked falling rain or the ripples created when raindrops fall in a puddle. Envisioning this work in Japan alongside a high-intensity collaboration and cultural experience, Jefferson couldn’t wait to get started. One afternoon, she slipped away for a solo visit to the Mitsui Museum of Art in Tokyo, affirming her instincts. “I went to the teabowl collection and it was breathtaking,” she says. “Observing how the parts work together as a whole amidst the variation in a piece was very striking. Seeing how the movement of a teabowl works, I could appreciate something so simple and beautiful. I looked at the foot and the body and even the design that was on the teabowl itself; then there were the subtleties of each of those parts and how they came together to make something so quiet, gentle, soft, and beautiful.” 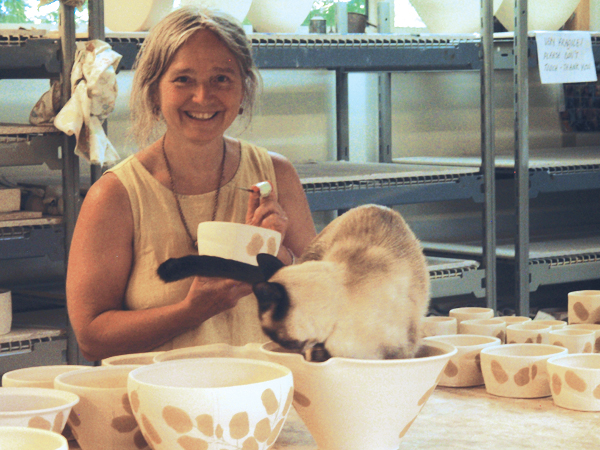 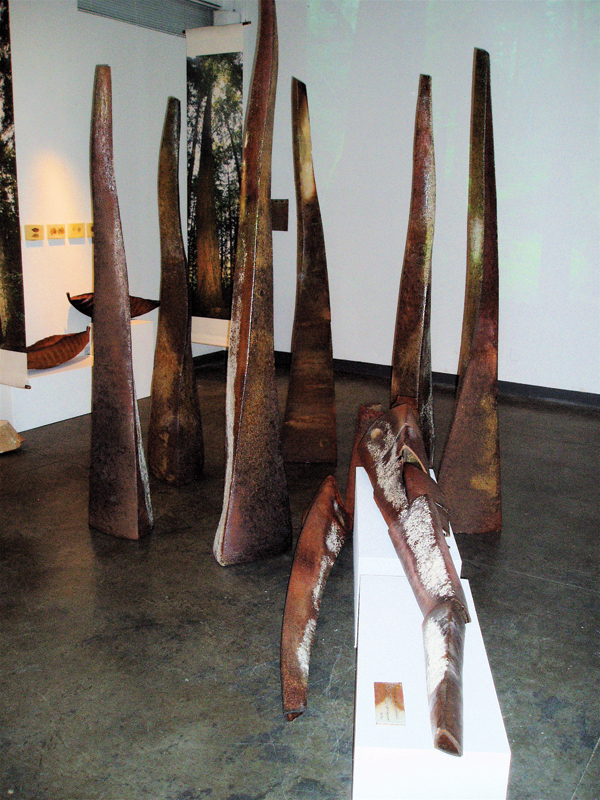 What struck Jefferson further was that these simple, ancient pieces could be so arresting and effective without overtly calling attention to themselves. Having traveled to Japan several decades ago, of course she had seen ancient pottery in person. But, like a tree, the angle we have on the world is different from year to year. What she saw then couldn’t possibly be the same as what she saw in 2013, even if studying the same object. “The work wasn’t flashy,” she says. “There was a quiet dignity to the pieces; a quiet movement. The eye didn’t get stuck anywhere.” While she’s too humble to think it herself, the same could be said of her own work.

Cathi Jefferson is a recipient of the Carter Wosk BC Creative Award for Applied Art and Design, has taught ceramics at University of Victoria since 2007, and has demonstrated throughout North America, the UK, and Korea. View her work in London for the 10-year celebration of the Carter Wosk awards, or in Ontario at Canada Clay and Glass Gallery. Learn more at www.cathijefferson.com.

Katey Schultz has written essays on more than 60 artists. She is the author of Flashes of War, a collection of short stories featuring characters in the and around the wars in Iraq and Afghanistan. In 2013, she received Book of the Year in Literary Fiction from the Military Writers Society of America and, in 2014, IndieFab Book of the Year from Foreword Reviews. Learn more at www.kateyschultz.com.

https://www.youtube.com/watch?v=qE1pnO_wxng&feature=youtu.beClick here to read, "Bread, Butter and Salt: The Pottery of Cathi Jefferson," by Rachelle Chinnery, which originally appeared in the May 2001 issue. 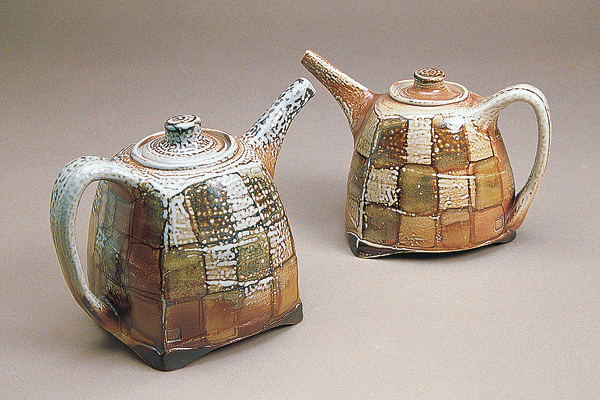 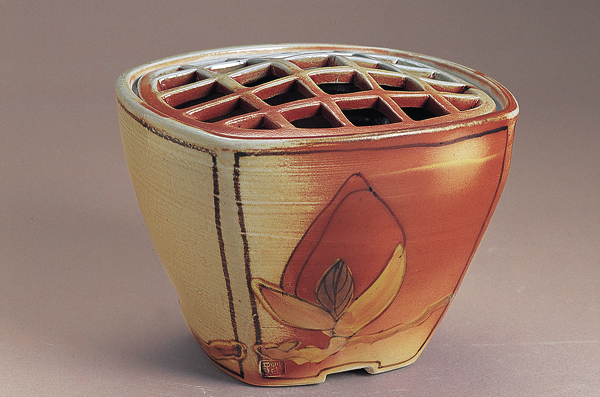 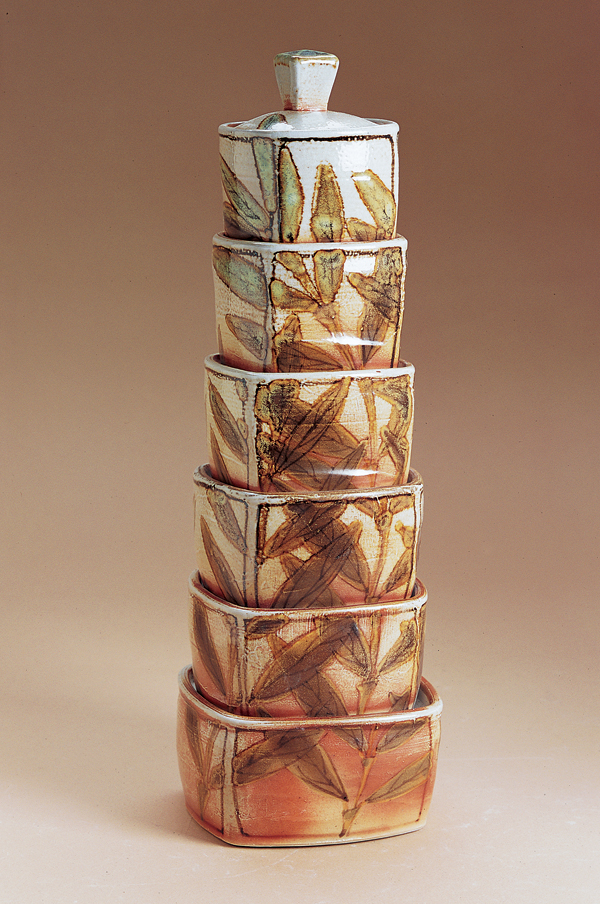 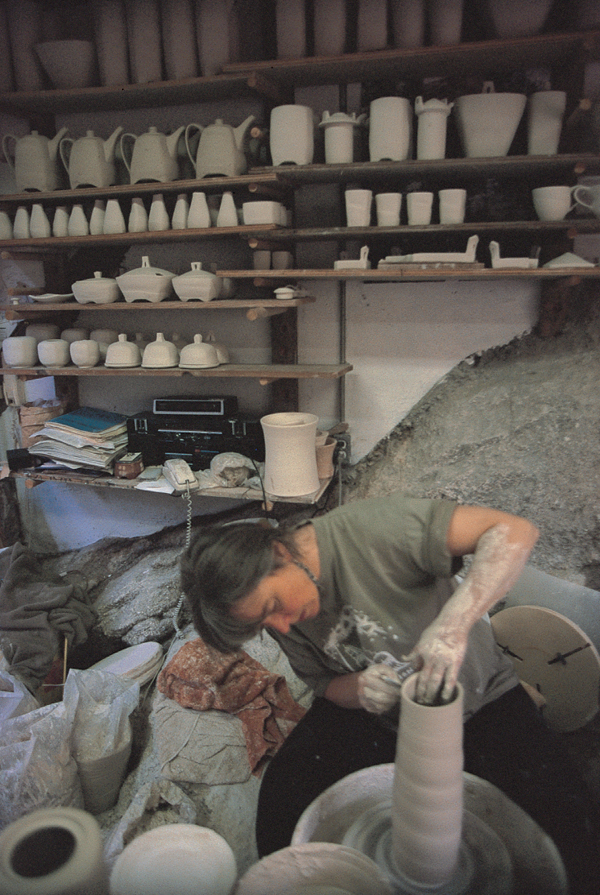 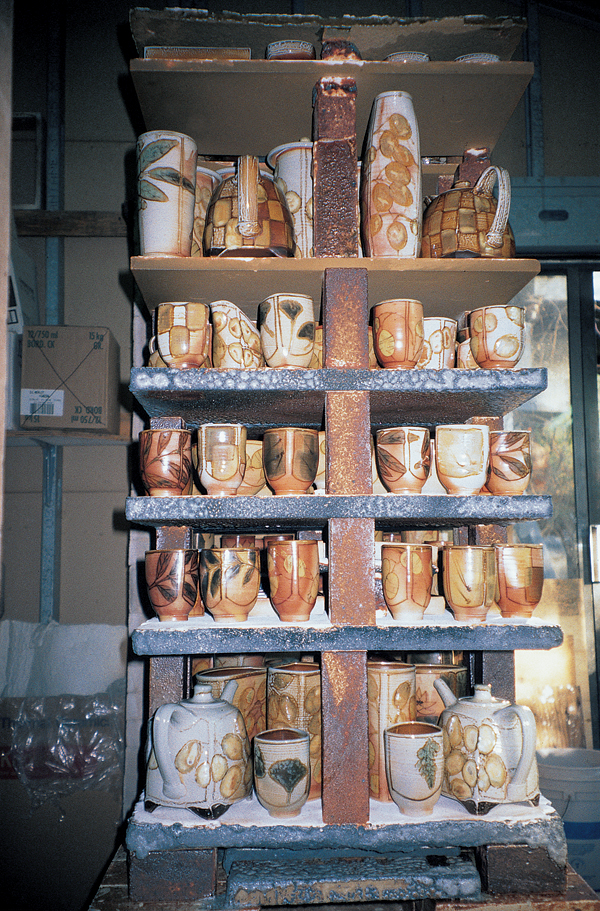 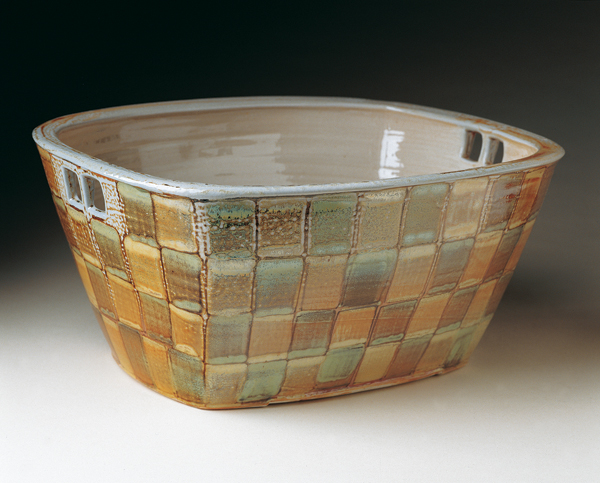