Appears in the March 2020 issue of Ceramics Monthly. 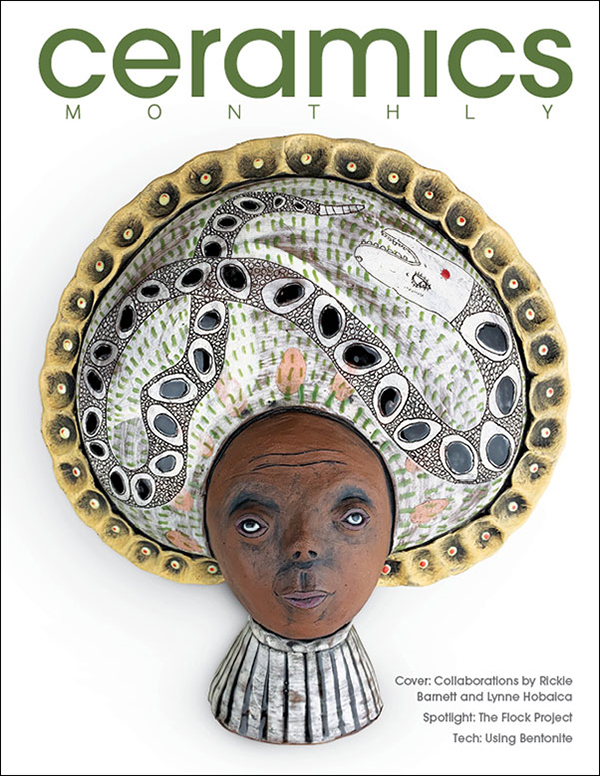 Beyond advertising the when and where of his most recent exhibition, Richard Shaw’s show posters reflect the detail and depth of meaning found in his sculptures—though through unexpected visuals.

Big drops of rain propelled by heavy winds left visible splats of water on everyone as Richard Shaw meticulously positioned 68 people and 6 horses on a field in Bolinas, California. The mood was tense, people were cold, and things were blowing everywhere, including the 4×5 camera raised on a 10-foot ladder. Everyone was waiting for Peter Voulkos. Shaw had asked his pal Pete to play the role of General Custer for his 1986 poster announcing his exhibition at the Braunstein/Quay Gallery. Most people versed in the ceramics medium are familiar with Richard Shaw’s porcelain trompe l’oeil sculptures, but few are aware of his over 22 exhibition posters spanning more than 50 years. 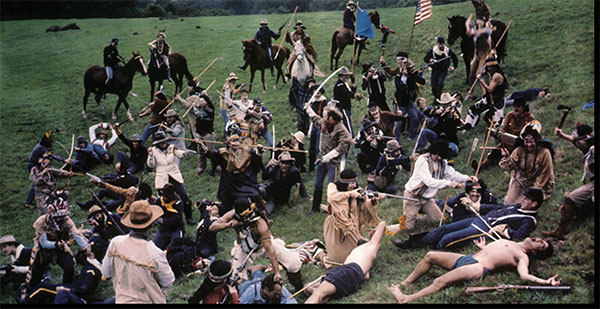 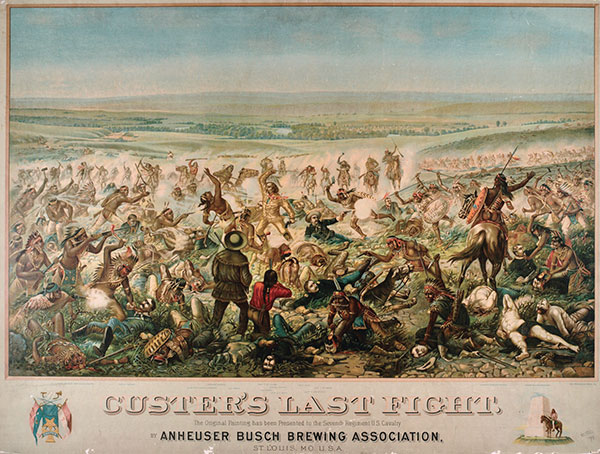 Richard Shaw remains one of the most recognized artists in the field of ceramics. Based in California, he became part of the force initiated by Peter Voulkos, Jim Melchert, Robert Arneson, and many others ushering ceramics into recognition as a medium of integrity. Shaw’s pioneering use of the still-life genre, silkscreen decals, and slip casting gave credibility to these now commonly accepted sculptural techniques, while bringing our attention to the medium’s long and complex history. Juxtaposing mundane objects he’s made from porcelain, he entices viewers to look and think beyond the recognizable imagery and material to their layered significance.

As with most artwork, understanding the fuels that forge what we see makes for a stronger engagement, adding poetic richness and insight. Shaw’s posters give no indication as to the content of the upcoming exhibitions, beyond dates and locations. Instead they serve to shed light on his influences, perspective, and manner of maneuvering elements. 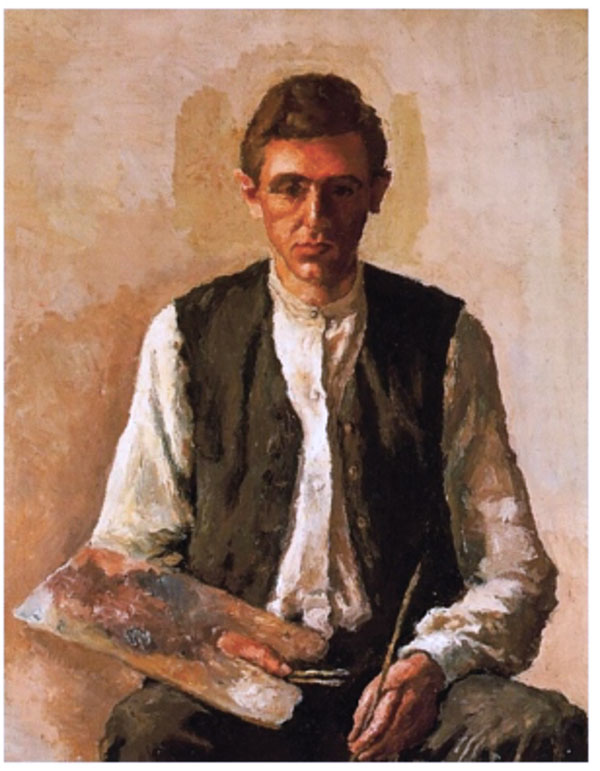 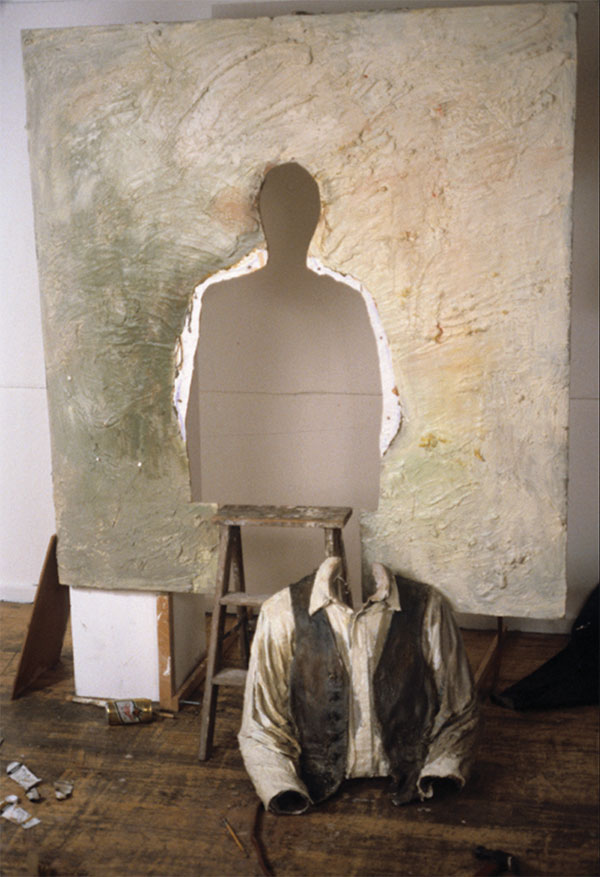 The 1986 poster turned out to be his most complicated. It was a recreation of an Anheuser-Busch promotional poster that was distributed across the US to establishments selling Budweiser beer. The original poster was made as a lithograph from a painting by Cassily Adams in 1884 entitled Custer’s Last Fight. Surrounded by cavalry and Native Americans, General Custer is depicted, frozen forever in a heroic pose, defying his impending defeat and demise. The original painting was intended to help dispel national fears of weakness. Shaw had seen it throughout his youth while hanging out with his colorful and talented Disney and United Productions of America (UPA) animator/writer dad (Dick Shaw Sr.) and friends. Profoundly influenced by intimate contact with these accomplished, innovative, and eccentric artists, Shaw was naturally trained to look at and think about the world around him and regard the depths of insightful ironies and puns easily dismissed. Looking closely at Shaw’s posters, the subtleties become visible, reminding us to look carefully. In the case of this poster, among the frenzy, Shaw sits to the right, canvas in lap, painting the whole event.

In contrast, Shaw’s 1996 poster shows two simple photos. On the right is a photo of Dick Shaw Sr. with a text bubble above reading, “Richard, get out of this lousy art racket before it’s too late.” His father had sent this to Richard while he was an undergraduate student at the San Francisco Art Institute. To the left is Shaw’s mocked-up photo of himself, only the text bubble replaces his name with those of his two eldest children. However, like most still-life vanitas’ messages, no one heeded the warning. 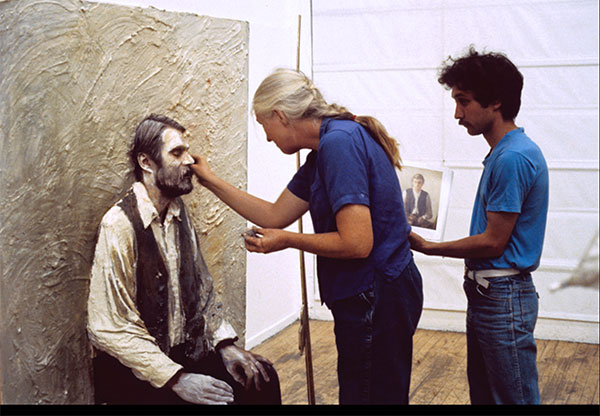 Layers and Dimensions of Meaning

Shaw’s sculptures, in view with his posters, add new dimensions as the layers unfold. He had just returned from Paris where he had been invited to work at the Manufacture Nationale de Sevres. While there, he happened upon a rare self portrait by Giorgio Morandi from 1925. For his 1988 poster, Shaw and his wife, Martha, also an artist, used canvas, paint, and plaster to model Shaw to look like the portrait. Just before printing, they agreed the tennis shoe would be a good gag to leave in.

As an art student, before moving north to San Francisco, Shaw had seen the 1961 exhibition of Morandi’s still lifes at the groundbreaking Ferus Gallery on La Cienega Boulevard in Los Angeles. Morandi’s influence on artists was immense. He had been called the best example of European Abstract Expressionism. His work even tiptoed toward Minimalism, pushing his bottle paintings beyond being about bottles, but about light and paint. 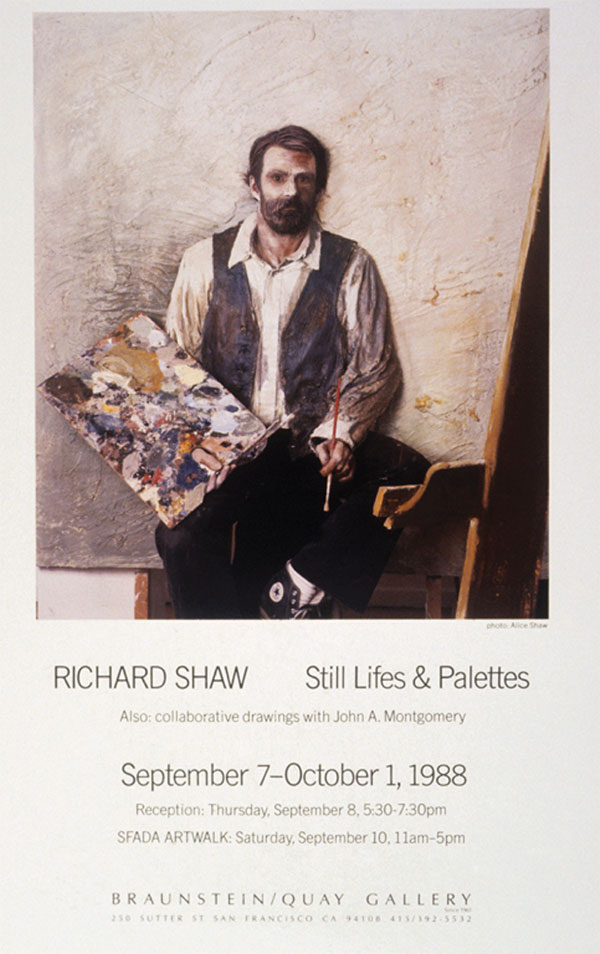 Shaw’s sculptures, just as his posters, draw out a multitude of ideas that thread their way through art and historical topics—for example, his piece with playing cards stacked atop a sketchbook, on top of a Canton Ware cup, on top of a Willow-patterned plate. First, Shaw fools our eyes with the objects being made of porcelain, their material realness occasionally indicated by obvious drips of textural slip. The objects are juxtaposed to appear as thoughtless doodlings by a now absent arranger. Then, beyond material curiosity, the iconography begins to come into focus.

Shaw’s use of Willow ware, which was familiar to him growing up, contrasts with knowledge of early 17th-century Dutch still life paintings, which often included images of highly sought after Chinese blue-and-white ware. Including these pots in paintings was a way offlashing the patron’s white gold, as porcelain came to be known. Shaw’s use of Willow ware nods to porcelain’s diminishing status as this ersatz blue-and-white pottery became cheaply produced in the US during the 1930s and easily obtained at Woolworth’s department store. The ware was slip cast and used an industrial yet complex image-transfer system, devaluing these production methods. His use of this ware references a link in the long history of porcelain’s ranging value, production, technology, and distribution. 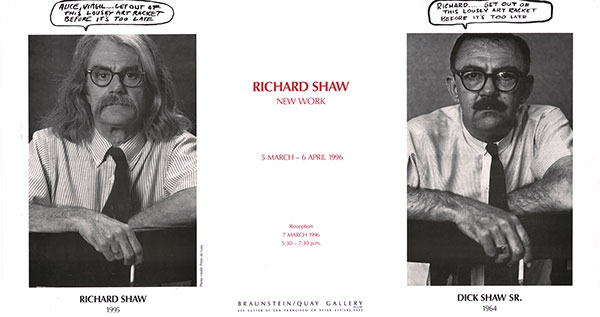 On the field in Bolinas, the wind was getting stronger, Shaw’s easel kept blowing away, the horses were restless, and the barbeques, which were used to provide atmospheric smoke, kept falling over. Then finally, here came Peter Voulkos, driven by gallerist Ruth Braunstein, winding up the hill. Shaw threw a cavalry uniform on Pete and steered him into the center position. Although exhausted and unable to stand, looking more like the reality of Custer in his final moments, he comes through in the poster as still fiercely ready to lead the charge.

the author Coreen Abbott received her MFA in ceramic sculpture from the San Francisco Art Institute and has been a professional artist since 1976. She has been an adjunct lecturer at University of California Berkeley, California; Nanjing University of the Arts, China; and Jingdezhen Ceramics Institute, China; as well as teaching and living in Faenza, Italy. She is currently working on a book entitled Shaw’s Posters and will present a lecture titled “Chinese Fast Firing: Rethinking Raku” at the 2020 National Council on Education for the Ceramic Arts (NCECA).