Appears in the January 2021 issue of Ceramics Monthly. 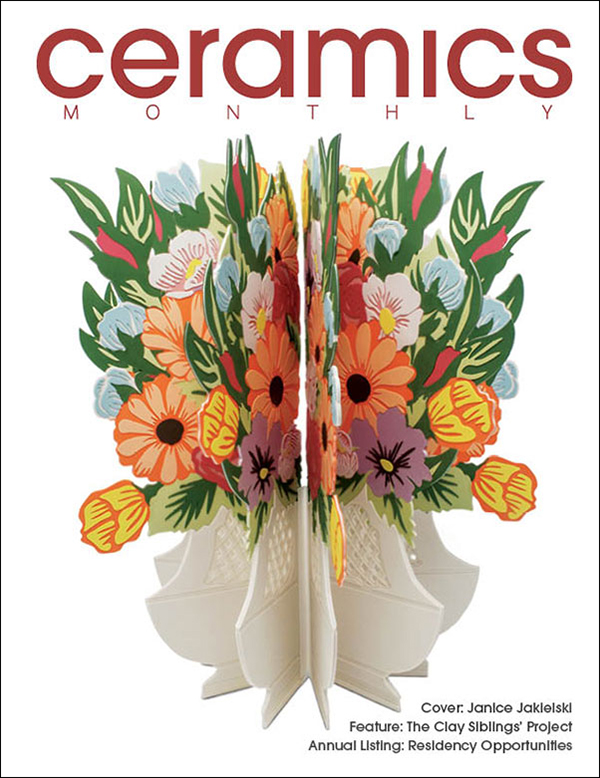 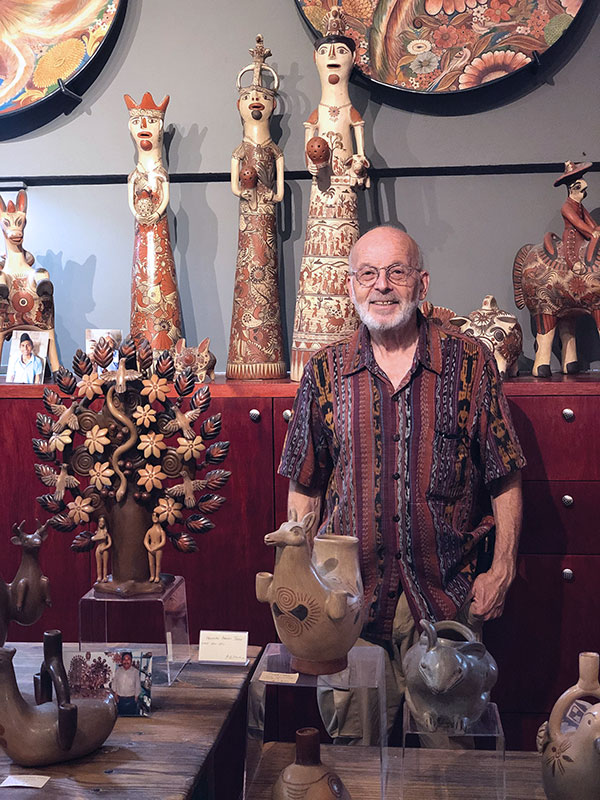 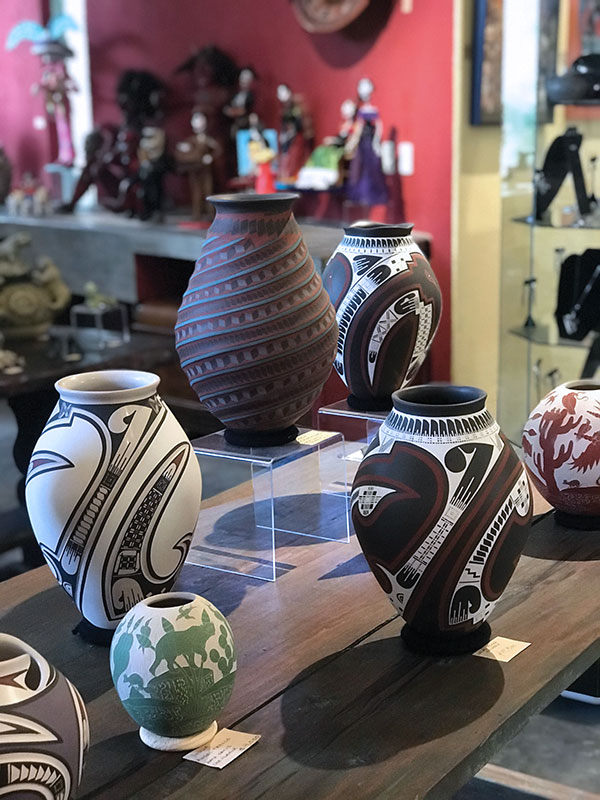 The art of ordinary people in indigenous communities is important because it helps to preserve ethnic and community values. Individuals working with local materials and traditional techniques sustain customs that may go back generations and it is frequently the untrained artists who find new ways to express ideas and give form to a shared cultural ethos.

Additionally, collectors and galleries provide an essential role in preserving folk-art traditions by creating a stage for this work outside of the artists’ communities. In Mexico, former ceramic artist Mayer Shacter has stepped up to help the consumer appreciate and understand the ingenuity and uniqueness of this art, and to support the artists who produce it in villages and studios throughout Mexico.

Shacter’s career as a ceramic artist began in Los Angeles, California, in the early 1960s where he worked with Otto and Vivika Heino at the Chouinard Art Institute, and later with Hank Murrow and Dora De Larios. For Shacter, De Larios was an important early influence and friend. After several years Shacter opened his own studio and shop called The Venice Pottery Gallery, and in 1968, as part of the back-to-the-land movement, he moved to Point Arena on the Mendocino coast. It was here that he continued developing his functional ceramic pieces, while also exploring new ways to work more creatively in clay, mostly by altering forms and allowing the material to become more expressive. Several years later, he moved on to Synanon in San Francisco to establish a working pottery called Synanon Ceramics, which he operated from 1974–80. Upon leaving Synanon Ceramics, he began working seriously in porcelain, which also led to his investigation of the teapot as a sculptural art form. These pieces, for which he later became well known within the ceramics field, were both time consuming to create and more difficult to sell in order to sustain a living. 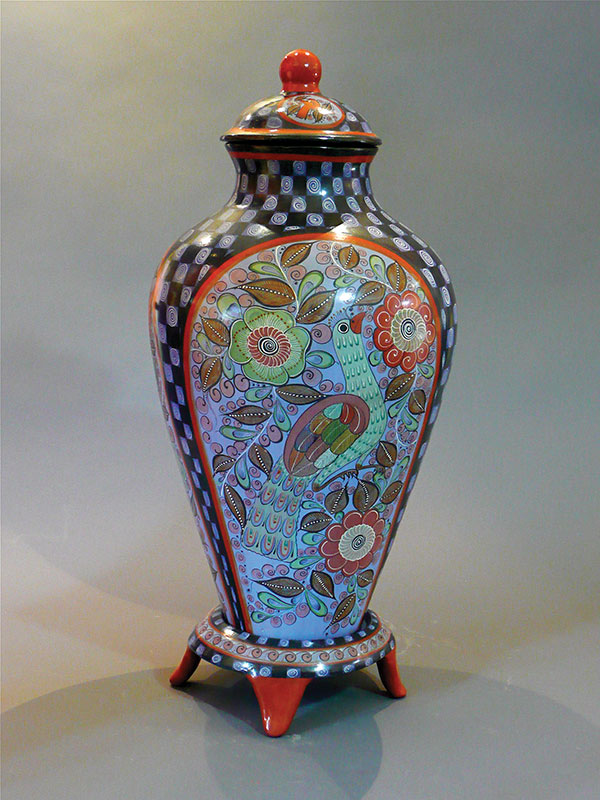 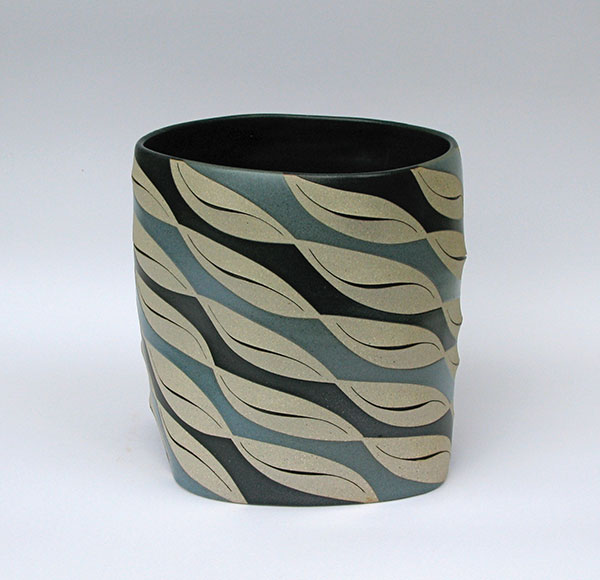 Over the years he maintained a studio in San Francisco and then later in Oakland. During his 27-year career, he had numerous solo shows and was the subject of two portfolio features in Ceramics Monthly and a portfolio in American Craft. His work is in the Everson Museum of Art, The Oakland Museum of California, and the collections of John Huston, Ella Fitzgerald, and George and Dorothy Saxe, among others.

Because of his educated eye and his love of buying and selling, Shacter gradually drifted into becoming an antique dealer and, after many years of creating art, finally left his clay studio and opened his own gallery in Oakland, called Think Modern, where he sold Mid-Century Modern furniture and decorative arts and indulged his passion for buying and selling.

A New Chapter and Opening a Gallery

Shacter’s love of Mexico began at age 19 when he spent nine months hitchhiking throughout Mexico and on to Quito, Ecuador, where he lived for four months. He loved the cultures and always dreamed of living in Mexico, so in 2003 he and his wife, Susan Page, purchased and renovated an abandoned furniture factory on 8 acres just outside of San Miguel de Allende in the town of Atotonilco, which is a small World Heritage Site.

Collecting folk art began with working to furnish their house using local crafts easily found in the surrounding area. Through these early acquisitions, Shacter discovered the richness of Mexican folk art, which led him to open a small gallery adjacent to his new home. This gallery, called Galería Atotonilco (galeriaatotonilco.com and galeriaatotonilcostore.com), began with a small, carefully collected selection of objects that soon caught the attention of buyers willing to make the trip out to his rural home to purchase items. What began in 600 square feet has now become a 6000-square-foot exhibition space. 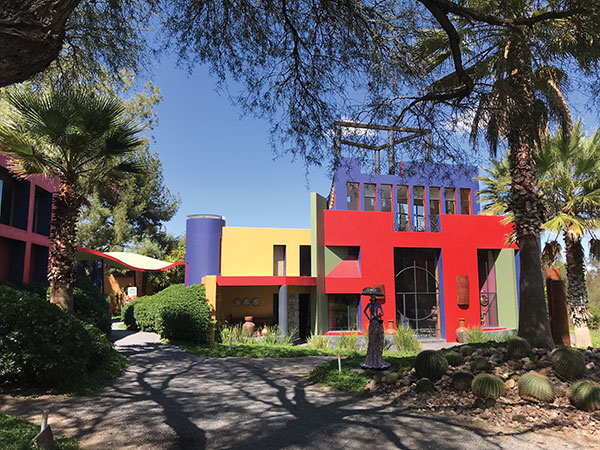 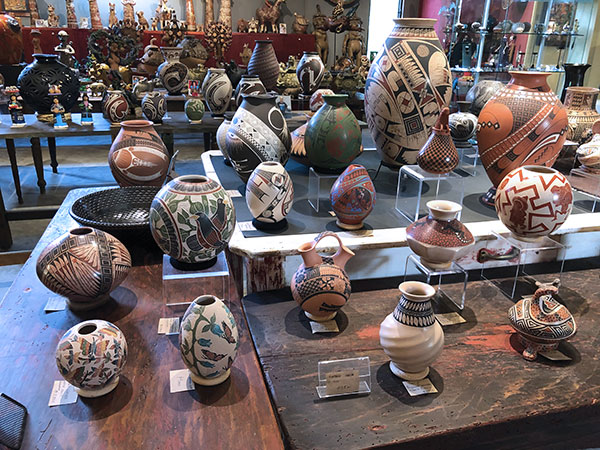 Shacter and Page traveled extensively throughout Mexico in search of quality, fine folk art. In small remote villages and studios located in cities like Oaxaca and San Cristobal, as well as numerous historic villages across the country (San Bartolo Coyotepec, Oaxaca; Acatlan and Izucar de Matamoros, Puebla; Amatenango, Chiapas; San Agustin Oapan, Guerrero; Tonalá, Jalisco; and Mata Ortiz, Chihuahua), they sought out the best artists to purchase their work for the gallery.

Examples of some of the finest Mexican folk artists working in ceramics today, who are also represented by Shacter are: 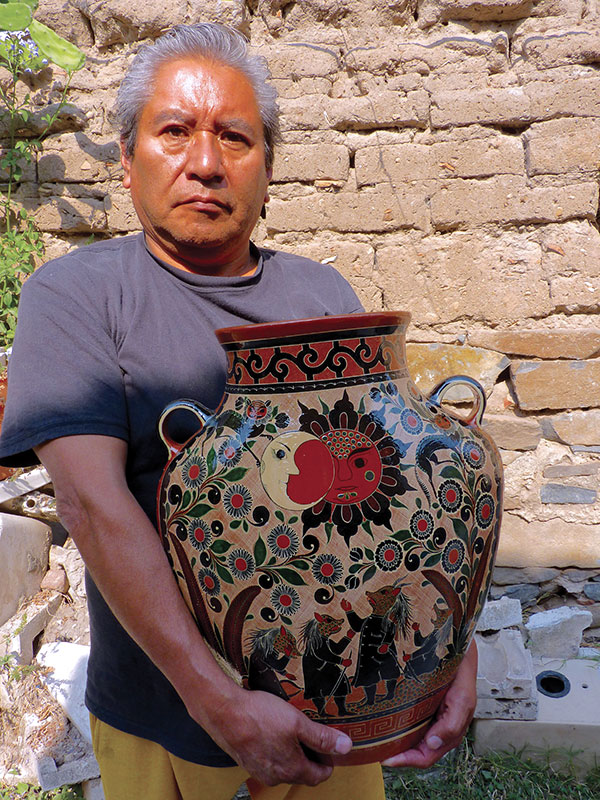 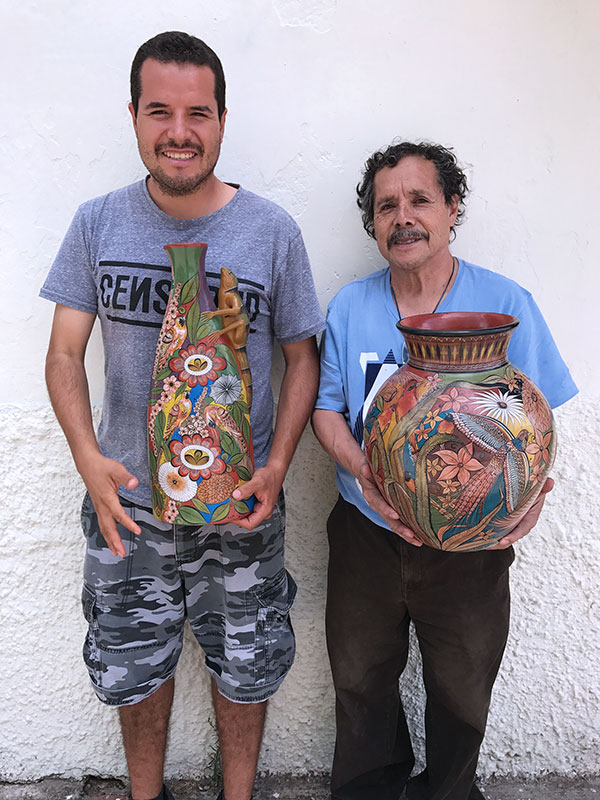 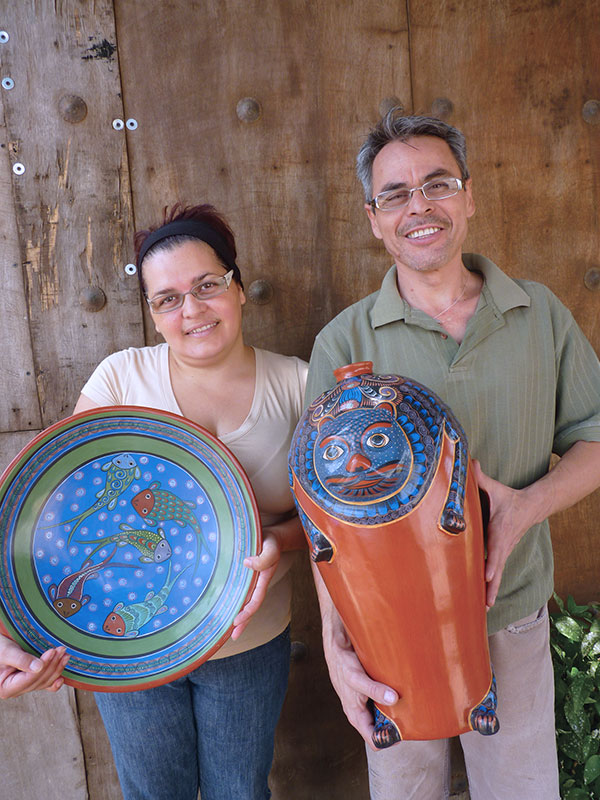 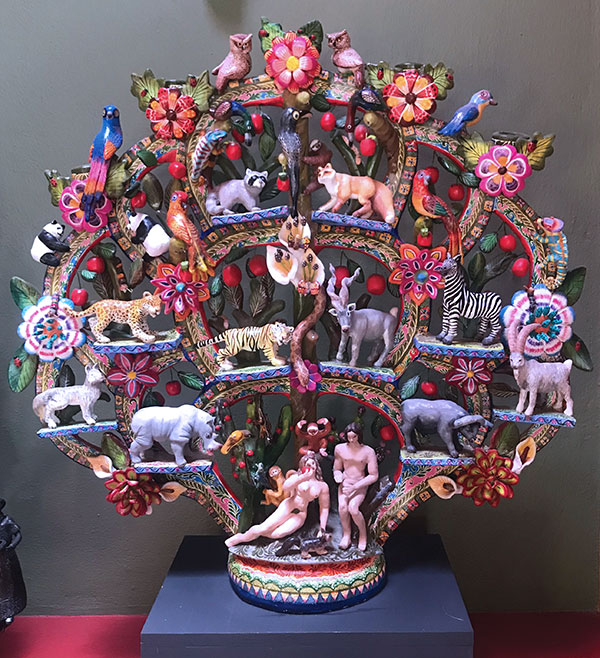 Shacter’s experienced eye and deep knowledge of crafts contribute to making his personal collection distinctive. Early on he realized the importance of educating himself by building a library of resources where he could study the art, the people, and the villages. His collection includes vintage market pottery, colorful majolica, tourist pottery from the 1930s and 40s, and other historic works. His travels and interactions with artists have helped him establish close friendships with them and their families. These trips also allow him to expand his knowledge to other crafts including woodcarving, papier-mâché, lacquer, textiles, and copper. He knew what separated the best of folk art from the ordinary were items that were innovative and meticulously produced.

From his studies of Mexican folk art, as well his understanding of folk art in the US, he recognized that the survival of a tradition within this genre of art was largely dependent on the makers’ ability to sustain a living. His insistence on paying cash instead of taking items on consignment helps the artists survive from their work and encourages them to produce the highest quality works of art. One of the wonderful things about Mexican folk art is that it is still reasonably priced. Some of the work is so exquisitely crafted and decorated that it could easily qualify as fine art, but they are still priced as folk art, making it possible to own a museum-quality piece by a great master. For Shacter, high quality became the standard by which he wanted his gallery to be known, forging a paradigm for others to aspire. 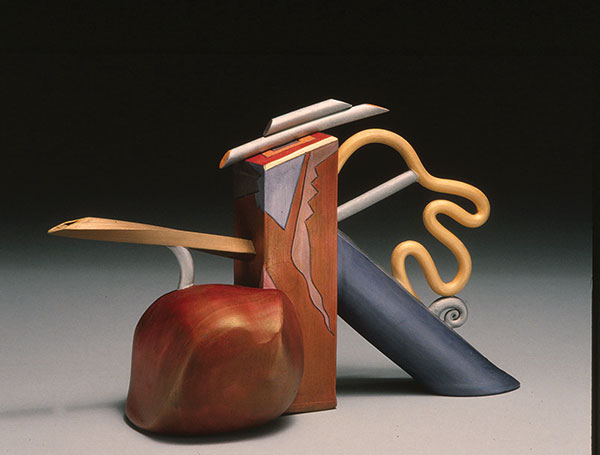 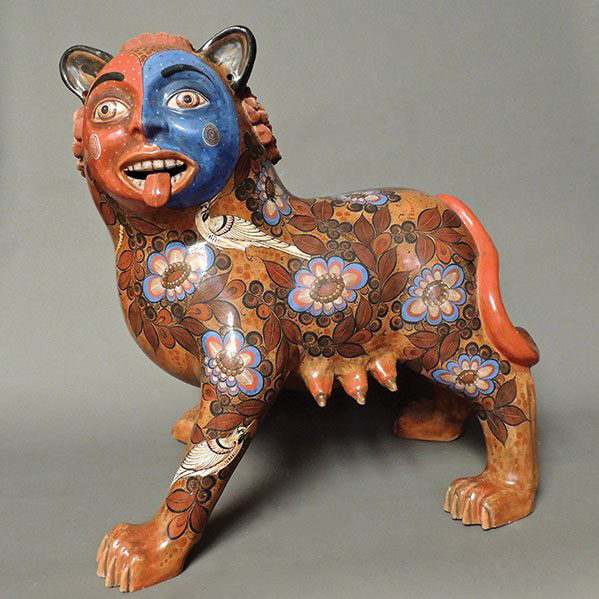 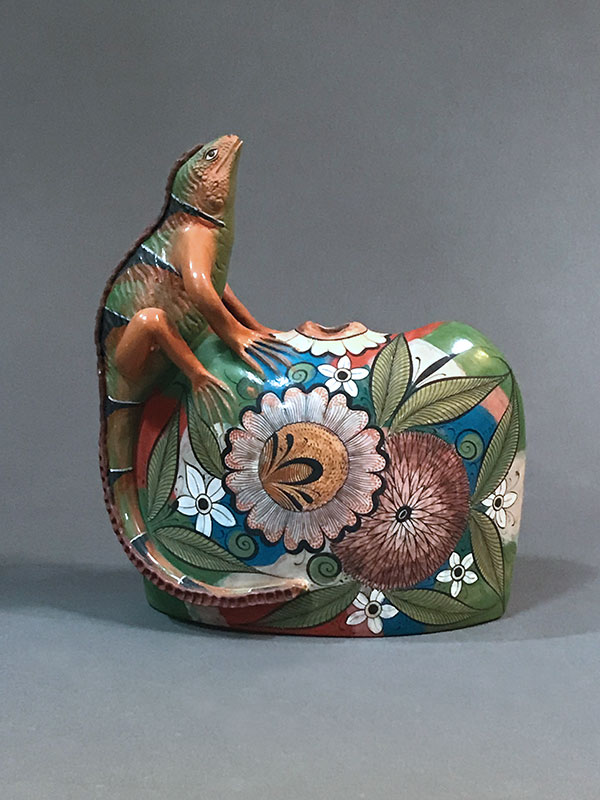 Shacter’s love and understanding of both folk art and contemporary clay has also allowed him to bring together both genres within his gallery in Atotonilco. With ceramics playing an important role in his offerings of folk art, and alongside an impressive personal collection of contemporary ceramics from the US on display, Shacter also presents ceramics by the contemporary Mexican artist Gustavo Pérez. Pérez’s clay vessels, manipulated to perfection to show how clay can be both expressive and sensual, sit alongside traditional clay folk art in a symbiotic relationship that allows each to thrive. Galería Atotonilco has earned the reputation of presenting the finest of Mexican art, both in the areas of folk art and contemporary clay.

“Do you ever miss making clay art yourself?” people often ask Shacter. “No,” he replies. “The satisfaction I have finding and promoting other deserving artists in the richly compelling culture of Mexico gives me all the fulfillment I could ever seek.”