Appears in the April 2019 issue of Ceramics Monthly. 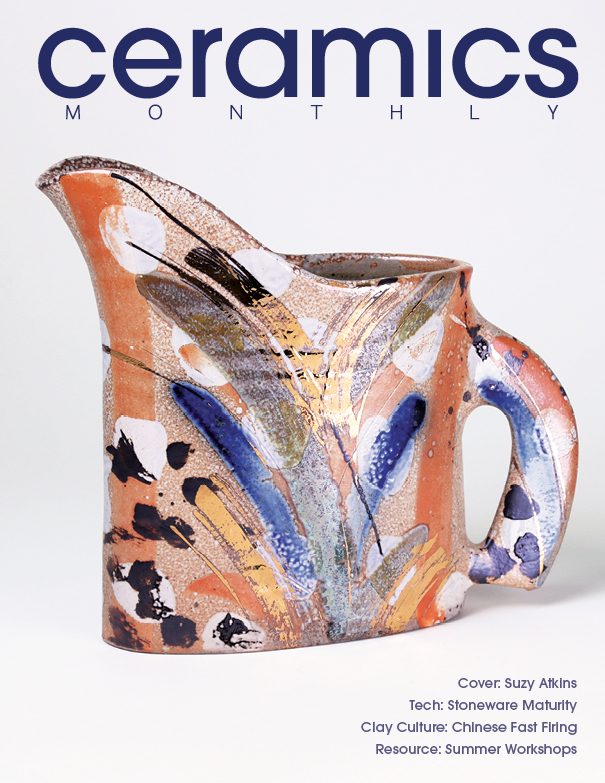 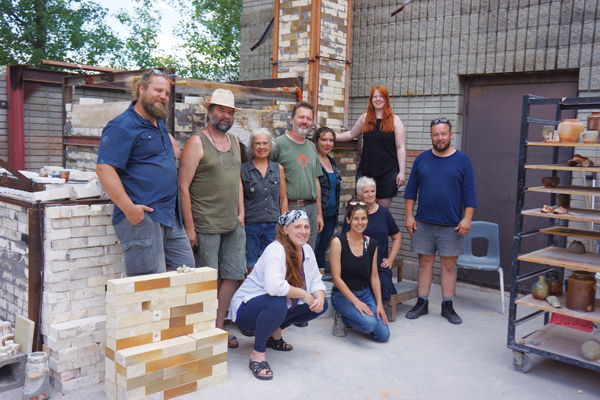 An unexpected opportunity to replace an inefficient kiln led to a workshop experience at the University of Manitoba in Winnipeg, Canada.

In October 2017, Paul Hess, the director of the School of Art at the University of Manitoba, asked me to come to his office. Over the course of several years, he had endured my complaints about the school’s inefficient train kiln. That afternoon he declared, “We’re going to build a new kiln!” In an era of tight budgeting, this news came as a big surprise.

By March, the planning for the build was ramping up. Staff had been assigned individual roles and discussions over the type of kiln that would be built were underway. If students were to learn, the kiln needed to be small enough to be fired often but large enough to balance out the effort. It should reach cone 13 or 14 in a reasonable amount of time, be easy to clean and load, and be fuel efficient and smokeless.

I had fired a kiln that met these parameters at the studio of a colleague, Markus Boehm, in Germany, and wondered if he would sell us the design. After several conversations, Boehm offered to design a kiln based on our requirements and lead a kiln-building workshop. Hess and I thought this was a great way to engage with the community. So what began as an idea to purchase a design morphed into an event that required much more planning. 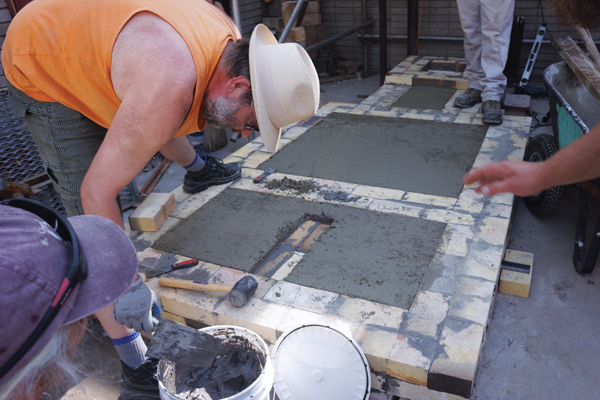 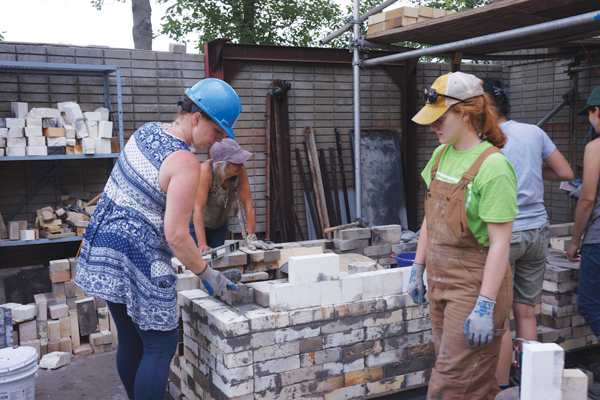 Deciding on a date for the workshop was key. Boehm only had two times available, late June or September. We settled on June, even though it was only three months away. To protect all parties, a contract was drawn up that stipulated Boehm’s honorarium, including airfare, accommodation, all meals, along with an hourly fee for research should the need arise. We agreed that the kiln would be built and fired in 9 days. This timeline required twelve workshop participants. We planned to begin the workshop on June 21, and to work from 8:30am to 7pm daily. We would load the kiln on the 27th, fire on the 28th, and unload on the 30th. Boehm would deliver an artist lecture on the 29th.

The workshop was also to be a learning experience. Participants would leave with the knowledge needed to build their own kiln, the plan for ours, as well as clay and glaze recipes. A registration fee of $325 was set—low enough to encourage interest amongst potters, but significant enough to ensure dedication to the project. Registration was on a first-come, first-served basis without any screening. Information was sent to prospective participants through the school’s e-memo, several Facebook accounts, and blogs. In less than a week (by mid-March), we had twelve participants and a waiting list. 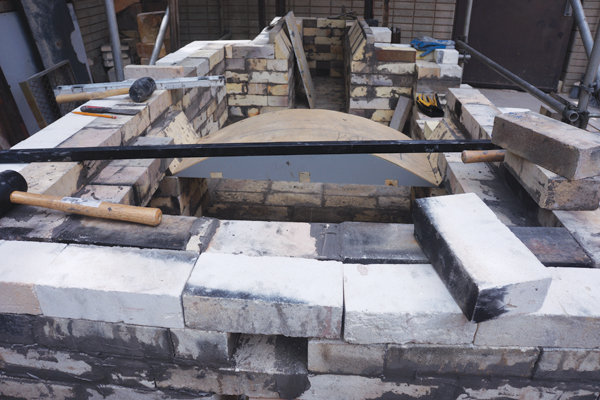 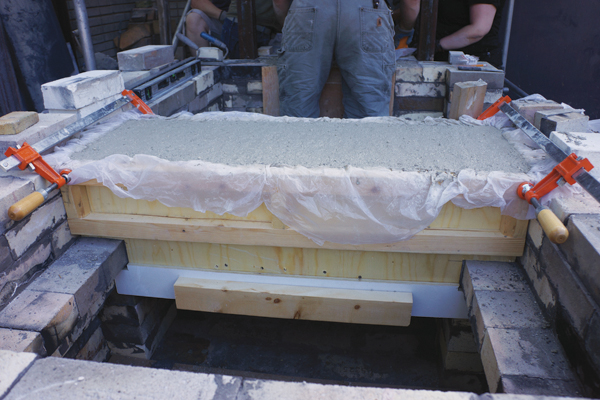 The ceramics technician, Christopher Pancoe, took down the old kiln. Since no mortar had been used in its construction, most materials were salvaged, including the iron. The new kiln required 900 hard bricks and 1250 soft bricks, excluding the chimney. All of the hard brick and more than half of the soft brick needed came from the old train kiln, as did the hard brick for the chimney. Our local supplier, The Sounding Stone, was selling off a quantity of K-28 insulating bricks, which we purchased for $5 CDN each. Trying to find the precise castable and mortar that Boehm specified proved a challenge. What was common in Europe was not available in Canada or, for that matter, in North America. If there had been more time, these could have been shipped. Boehm took over trying to locate substitutions, calling suppliers in Canada and the US, all the while comparing material data sheets. Even after making compromises, the materials still had to come from several distant locations. RHI Magnesta in Edmonton, Alberta, supplied the 39 feather arch bricks and mortar. Improheat Industries, our local distributor, ordered the castable (4 cubic meters of dry Kaolite 2600 LI and 1/2 cubic meter of Kaolite 2200 HS) from Morgan Thermal Ceramics in Atlanta, Georgia. At the time, we were experiencing a strike by Canada’s rail workers and it was unclear if it would be settled in time for the materials to arrive for the workshop. Luckily, the castable arrived with one day to spare.

The most nerve-wracking hurdle was something no one anticipated: the need for a building permit. The school of art had a tradition of wood firing that went back to 1964. Kiln construction had never required a building permit before, but this time it was different. Members of our team met with architects and a structural engineer from the university’s physical plant. Boehm’s sketches were translated into elevated site drawings while the structural engineer worked out the chimney height and bracing supports. There were three concerns: the height of the chimney in relation to the roof of the adjacent building, the distance of the firebox from the wall of that same building, and the design and size of the lid to the firebox. The finalized drawings were submitted to the City of Winnipeg on May 18; the architect and the engineer were optimistic that they could get the permit fast-tracked. 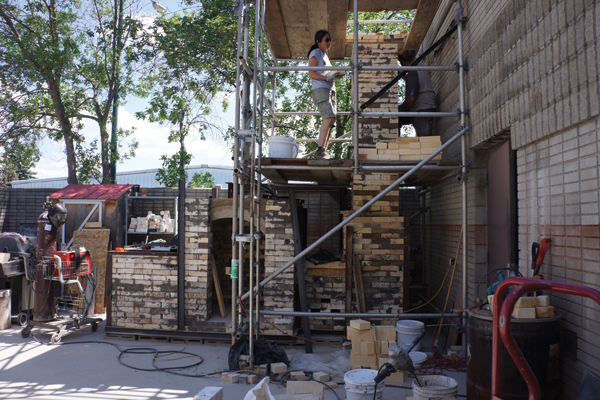 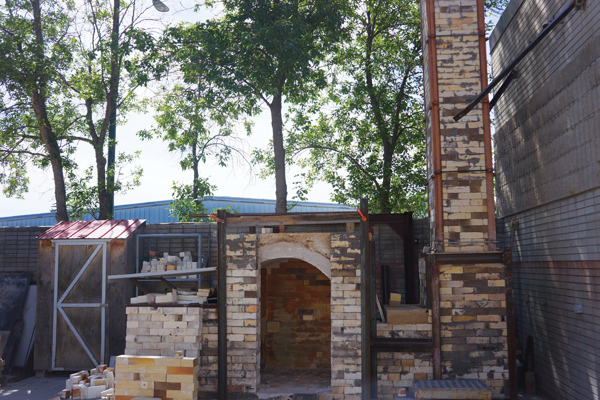 Despite the issues with materials and permits, everything else was falling into place. We used the time to look for reasonable accommodation and food for the participants. Boehm wanted to stay as close as he could to the building site. Several of the participants were coming from out of province and required lodging; no one had a lot of money to spend on hotels. Boehm was concerned that if the participants had to leave the site for their lunch, they might not return. Kiln building was, after all, a lot of hard work and the forecast was calling for extreme heat. After being told there was no accommodation left on campus, by sheer serendipity, basic rooms with shared baths for $55 per night including all meals became available at one of the colleges on campus. The close proximity to the kiln site was another bonus.

On June 10, the permit for the new kiln arrived. A sense of both relief and great anticipation set in. Boehm came on Thursday, June 19 and immediately got to work placing the first three courses of the kiln. Out-of-town participants arrived on the 20th, and everyone met for the first time at 8:30am on June 21st to attend a short, mandatory safety course. After that, it was time to put on hard hats, safety glasses,  and steel-toed boots and persevere through sweat—lots of sweat. While the workshop ran from 8:30am to 7pm each day, on at least one occasion, participants returned after dinner, staying until 10pm to meet the day’s goal.

My faith in Markus Boehm’s ability to motivate a group of participants to give more of themselves than they might have ever thought possible never wavered. He told everyone that he wanted them to try different tasks but, if they were afraid of heights or scared of the brick saw, he understood. All of the wooden forms for the roof and flue were made during the workshop. With the required metalwork for the bracing for the firebox, firebox lid, main chamber of the kiln, and chimney, we were fortunate to have two individuals who could weld. Over the course of the week, you could feel the confidence, respect, and friendships growing in the team.

On Tuesday, June 26, 5 days after the start of the build, the participants began to glaze the bisque-fired pieces they had brought. Boehm’s clay body was also prepared, and everyone was encouraged to create more work that would be fired raw. Wadding was prepared, and pieces began to fill the shelves of two 8×4×2-foot trolleys. 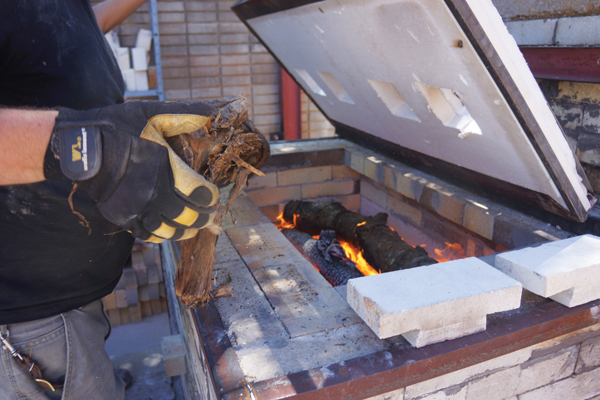 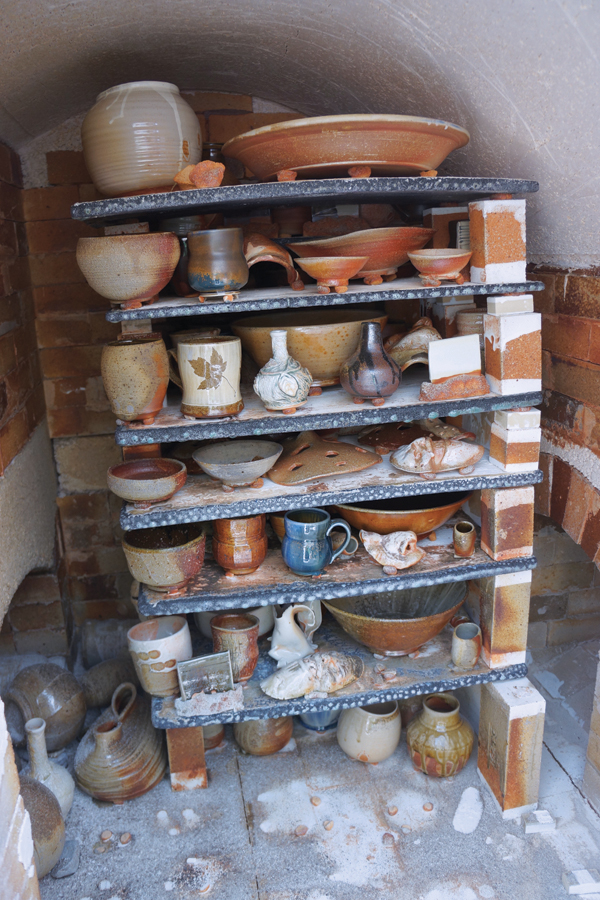 A Successful Firing and Camaraderie

On Wednesday, the bourry box’s one-cubic-meter chamber and extended throat were loaded. The door was closed, every possible place where air could enter the kiln was sealed, and the Oxyprobe, which reads the temperature as well as the atmosphere, was installed. The Oxyprobe is essential because this kiln is designed to be smokeless.

The kiln was pre-heated for nine hours with gas and small pieces of wood to build up the ember bed and to slowly dry out the castable arches. Stoking on the hobs, the two firebrick projections on either side of the firebox where the logs rest and burn freely, began at 6am when the temperature inside the main chamber had reached 1112°F (600°C).

The kiln fired like a rocket. The poplar wood was even soaked in water to slow the rise while attempting to level out the temperature in the main chamber. At 7:10pm, the last log was put in the firebox. The embers were allowed to burn down before everything was sealed. Boehm and his team had, indeed, built a kiln and fired it in one week. The main chamber reached cone 14 consuming only half a cord of poplar. No one could quite believe what had been accomplished. Participants were almost delirious with excitement. Matt Boyd, the technician for the ceramics department at Red Deer College in Alberta, said: “It felt criminal. This kiln was way too easy to fire.”

On Sunday, the door was partially unbricked at noon. By 2pm, the group was growing restless with anticipation. An hour later, everything was unloaded. After comparing results and exchanging pieces and contact information, no one wanted to leave. We all recognized that the experience of a successful kiln build, the teamwork, and the self-confidence that grew alongside new friendships was irreplaceable.

the author Mary Ann Steggles is a maker, curator, and writer as well as a professor at the School of Art at the University of Manitoba, Winnipeg, Canada.