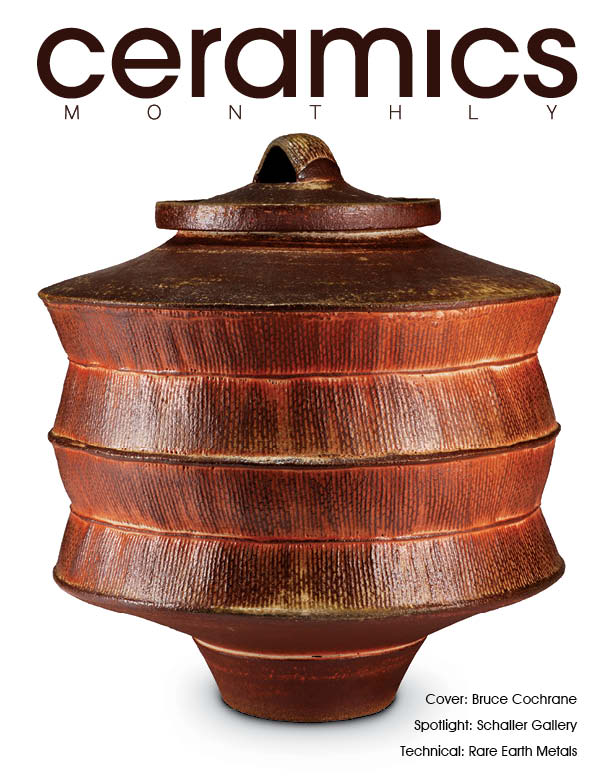 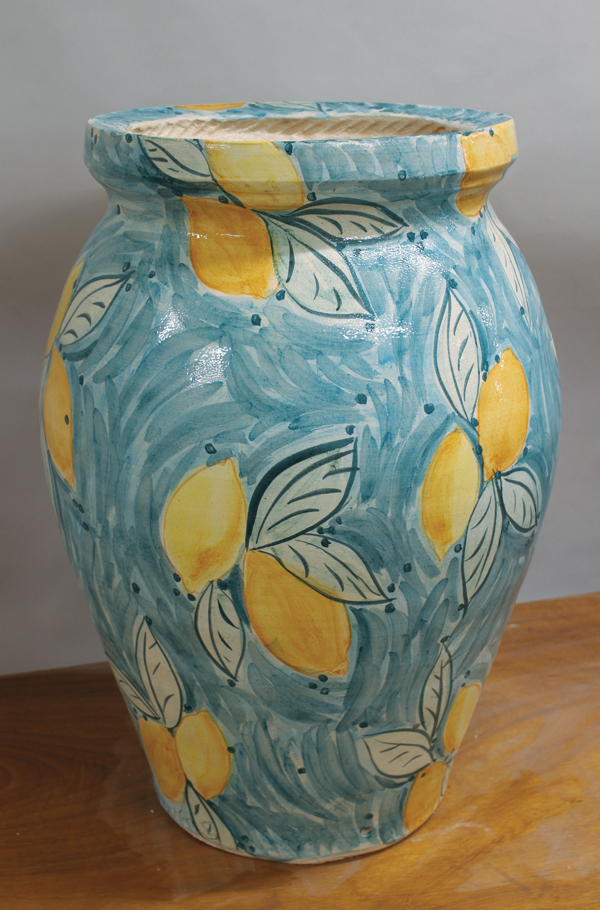 I had the opportunity to help build and decorate a large, traditional jar with French artist Pietro Bruzzi, who is known as Pierrot. He is a third-generation potter in the town of Vallauris in the South of France, near the border with Italy. Although I initially visited to watch him demonstrate the coil-building technique that was developed well over 2000 years ago during Roman times and even earlier, Pierrot invited me to help him build a jar to learn about the process first hand.

These jars, made and decorated by various artists, can be found all over the town of Vallauris. The town of Biot, 8 miles from Vallauris, also has a tradition and history of making jars in this manner. The clay is essentially a sandstone-colored cone-6 clay body with fine grog, now purchased at a ceramic supplier. The clay that was used in earlier times was an iron-rich, low-temperature clay that was mined in the area. Although these functional jars were once used for storage, now they decorate the town of Vallauris, lining the streets, filled with flowers and ornamentation, and decorated by many artists.

Vallauris was once known for its functional utilitarian ware. At a high point for pottery exportation during in the 17th century, there were over 200 potteries in the town, all employing potters to produce functional ware. The jars, like all of the pottery in Vallauris, were exported throughout the Mediterranean region. I am told that at the industry/trade’s highest point, potters made more money than doctors, because the work was in such high demand.

In recent history, the potteries began to flourish again at the turn of the 20th century, with a peak in the 1950s–1960s. After World War II, the town attracted many artists, including Picasso, who came to work with the local potters to create pieces in clay. 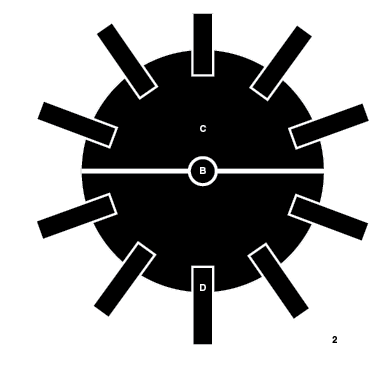 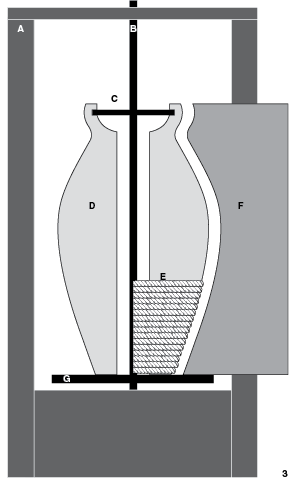 Creating a large jar using the technique Pierrot demonstrated requires a specialized framework that can be placed on or around a manual or electric wheel to support both the internal armature and a large profile rib (2, 3). In this case, the wheel is a manual, hand-turned wheel, about 2-feet high, with a pole in the center that attaches to a metal frame and extends down to the wheel head. The metal framework extends around the wheel. In addition to supporting the central pole, the frame allows a large wooden profile rib to be attached for shaping coils as they are added (3).

The armature consists of identical wooden spokes or slats with the outer edge shaped like the profile of the finished jar. These are slotted or keyed into openings in two wooden half circles (see 2). The slots in the circle fit into notches cut into the wooden spokes. Once assembled, the two halves are secured around the central pole toward the top with a smaller rope, which centers the armature on the wheel head. Next, a bungee cord is secured around the ribs (see 5). The ties of the armature spokes are located at the top of the form, so they can be easily accessed and untied when the potter is ready to remove the armature. 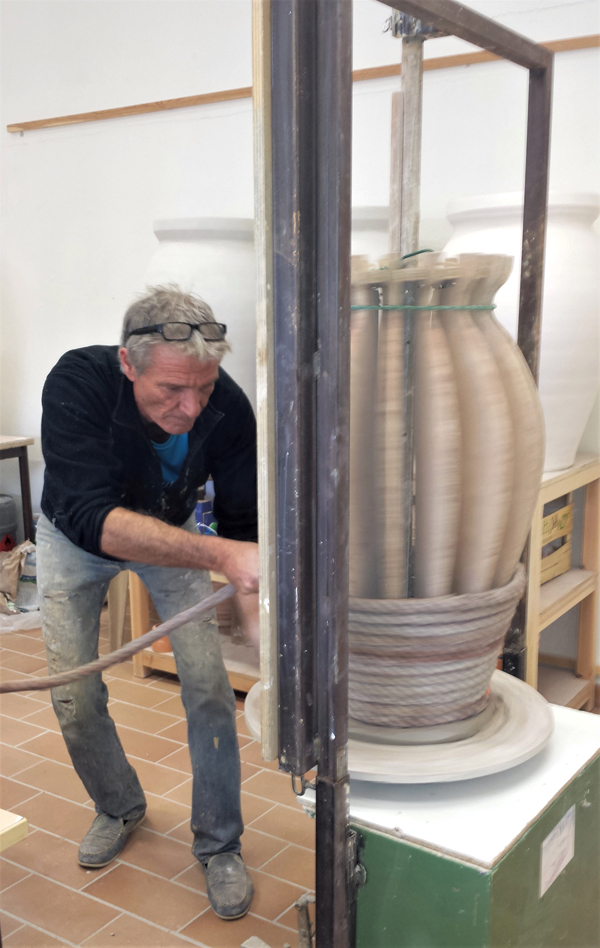 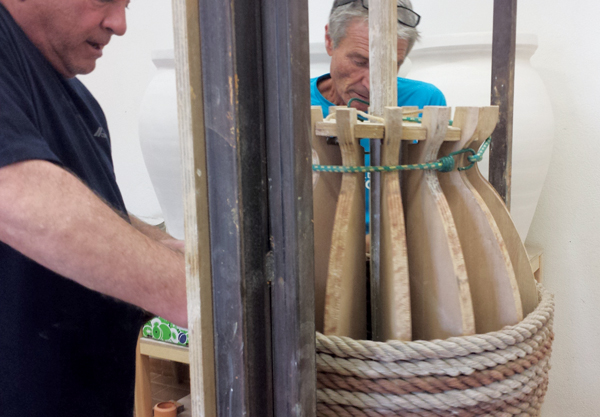 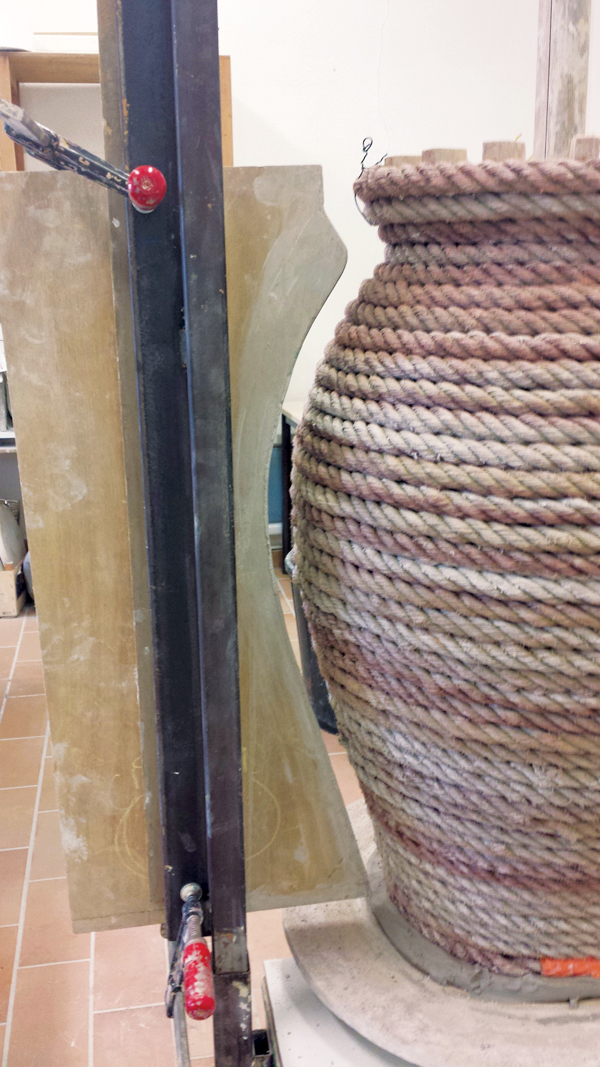 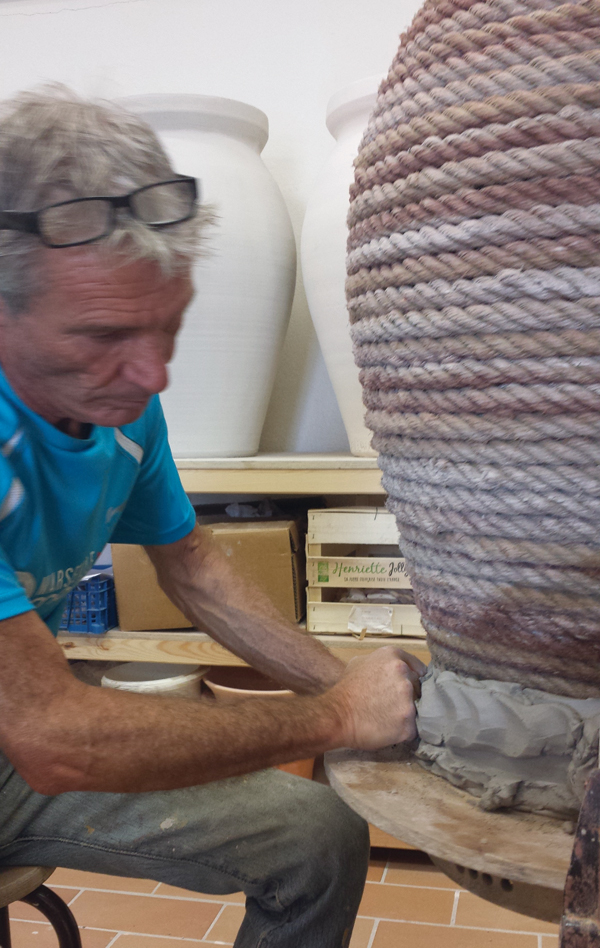 Next, a heavy rope (about 1 inch to 1½ inches thick) is wrapped around the armature to hold it tightly together (4, 5). This process takes two people to ensure the larger rope is as tight as possible. Since the rope is porous, and both fills in the space between the ribs and follows the curve of the wooden-slat armature, it provides a suitable surface for supporting the clay coils once building begins.

After securing the rope, Pierrot uses clamps to attach a large wooden profile template—which is like an oversized profile rib—onto the metal framework on the left side of the wheel (6). The cut-out area on this template has the same shape as that of the inside armature, and it determines the thickness of the form while simultaneously compressing the form as it is built.

Thick clay coils are added on top of the rope with a lot of water. The coils are pressed against the rope with the side of one hand (held in a fist shape) as the remaining length of the coil is fed through the other hand, and then smoothed a bit with the fingertips (7). With the addition of each coil, water is sprayed onto the whole section, and the clay coils are compressed into each other by hand; no ribs are used. The wheel is turned counterclockwise slowly as the coils are added, and the profile template compresses and maintains uniform thickness to the form (8). The coils are about ¾ inch thick and they are added in 2-foot sections at a time. The clay is smoothed into the base as evenly as possible and then compressed down to the previous coil for added attachment. Then the wheel is turned by hand, allowing for the compression and the clay to smooth out over the form. Excess clay is ribbed off the form by the side template (9). 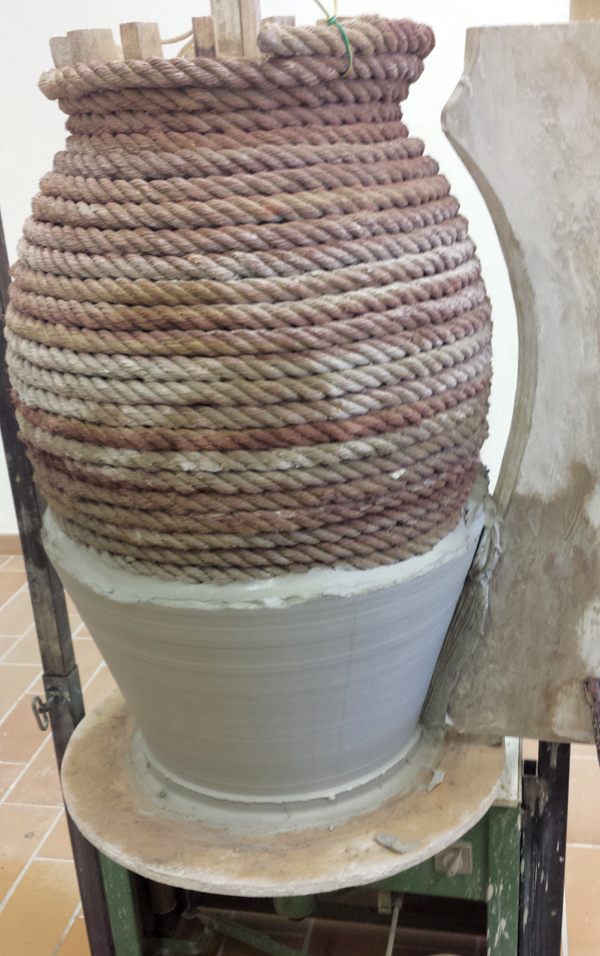 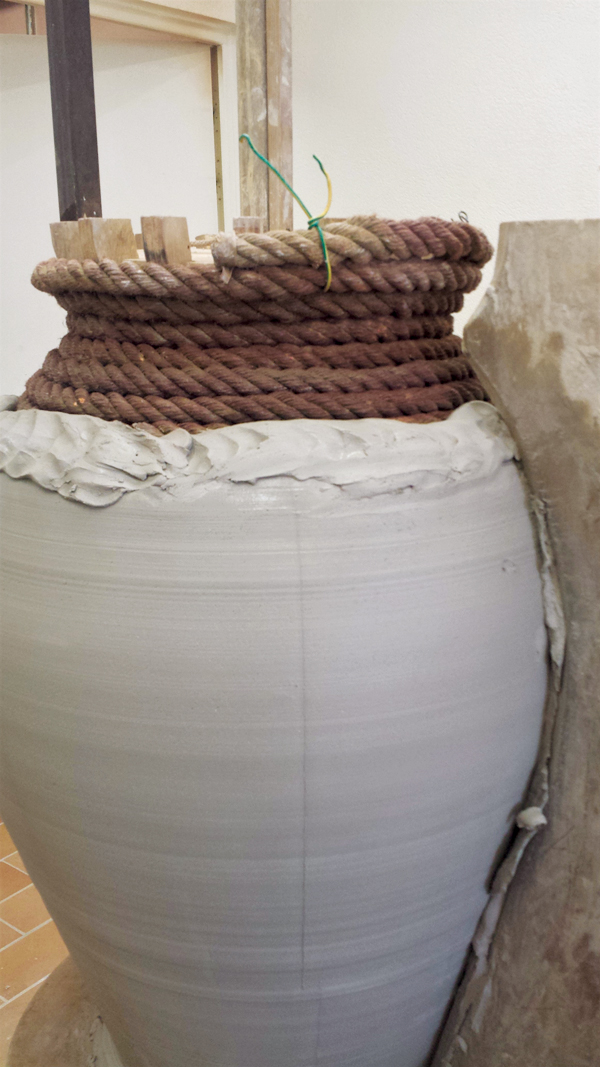 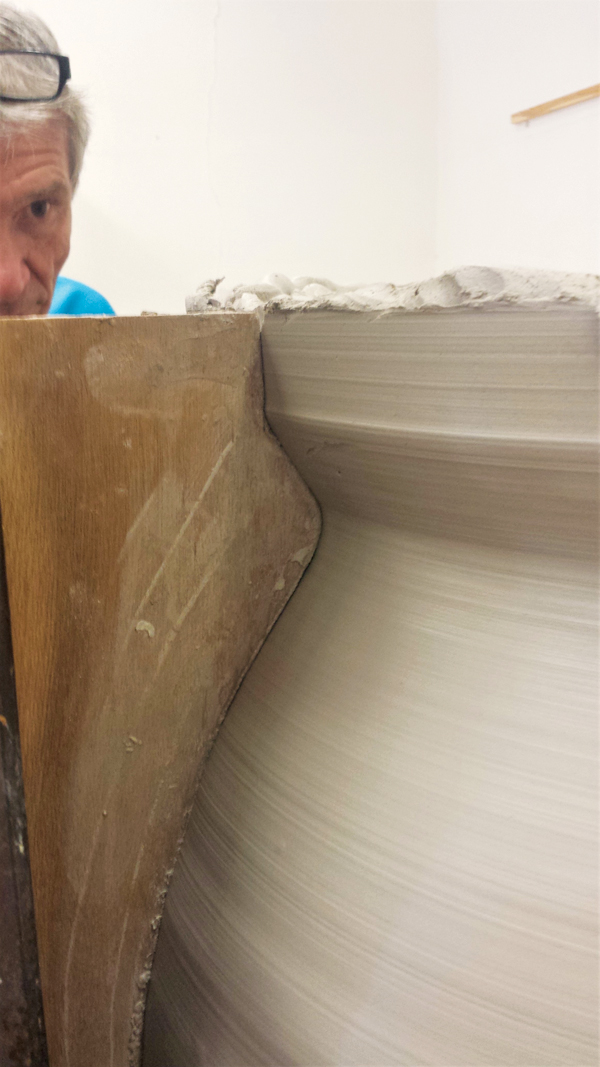 At the end, the wheel is turned once more, for a final round of compressing to even out the wall thickness and ensure all coils are well connected (10). Then, a rib is used for added compression and to remove any air bubbles (11). Pierrot levels the top of the jar using a fettling knife (12). It takes about 3 hours to build one jar. When the form is completely set up and can support its own weight, the bungee cord holding the armature sections together is removed, and the wooden slats or spokes can be removed. Next, the rope is removed by uncoiling it from the top and working toward the bottom. Since the jars have thick walls (about 1½ inches), they can withstand the inevitable tearing of the clay that happens as the rope is peeled away from the inside. The rope stays wet, since it has been saturated with water from the clay, which allows for an easier separation. The finished jar retains the rope texture on the inside (13). It is allowed to dry slowly before firing (14). 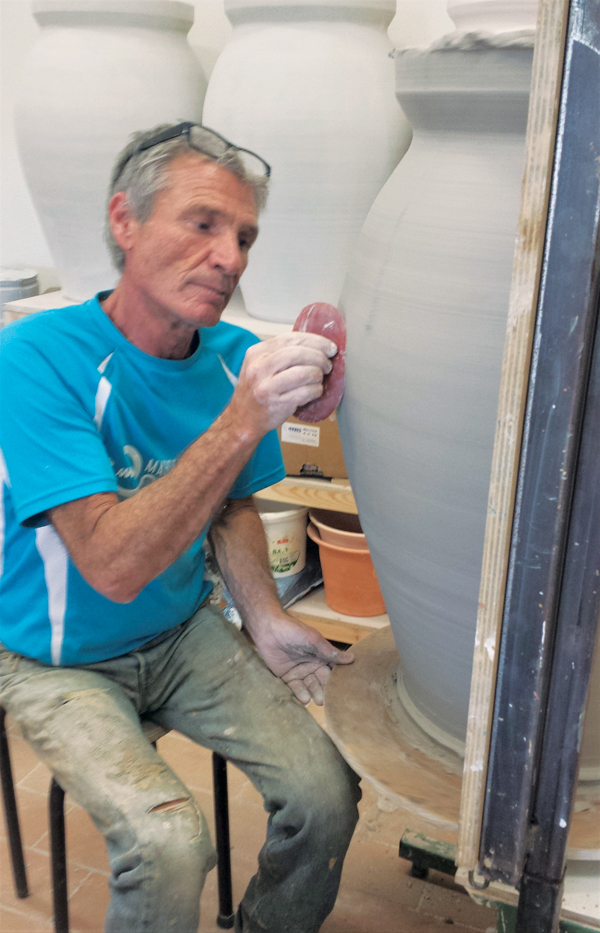 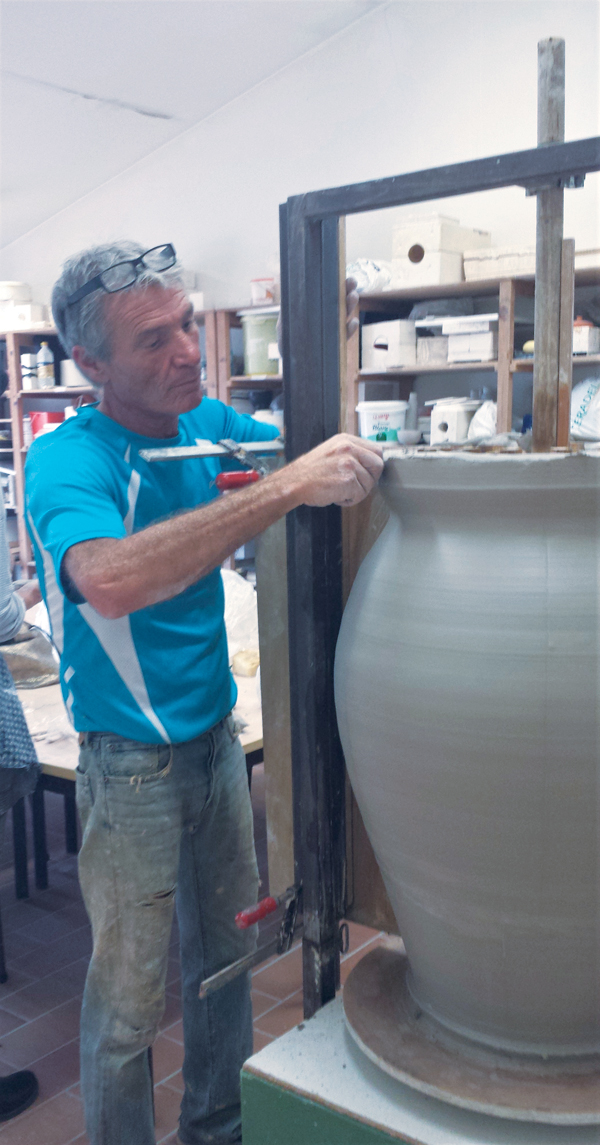 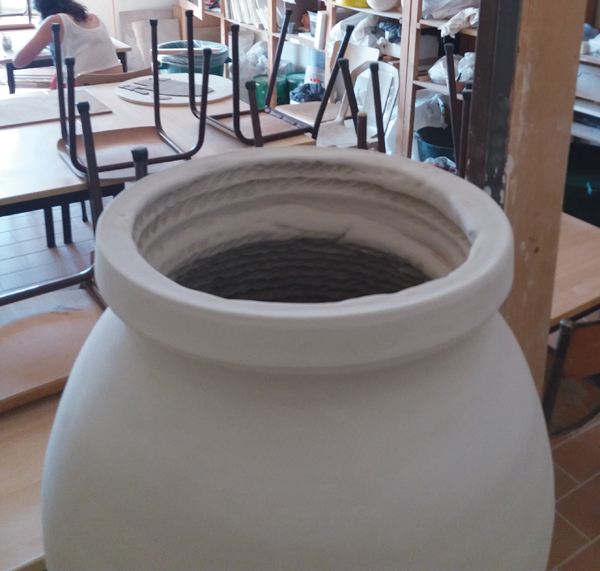 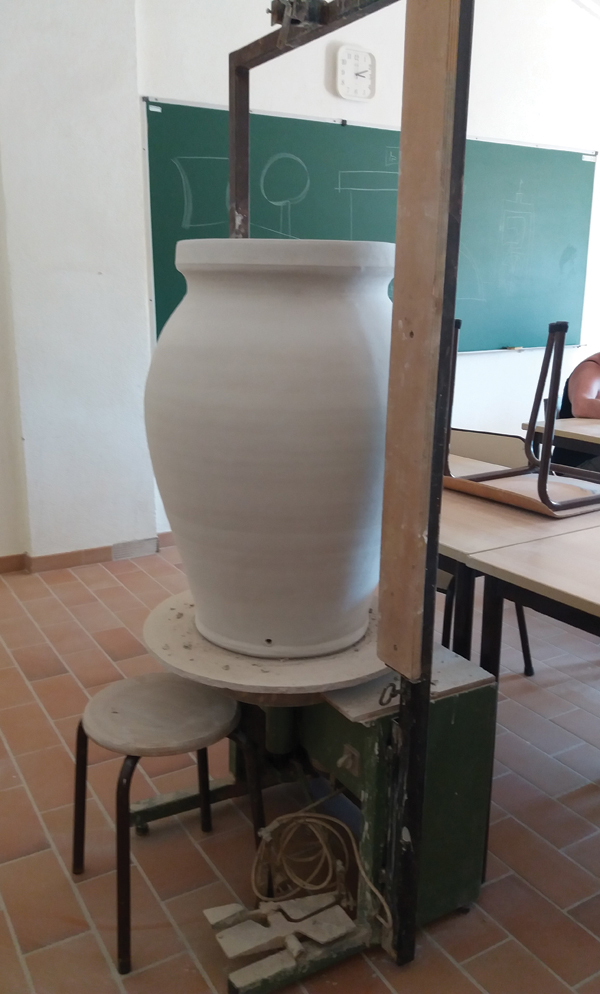 The jars are bisque fired in an electric kiln, then decorated with oxides. The jars that are not decorated by artists remain plain, unglazed, and without the addition of slips or terra sigillata. On many of the jars that other artists decorated with lower-temperature glazes, there is not enough surface bonding between the clay and the glazes to withstand the salt air, rain, and weather, and the glazes are chipping off.

In addition to his other work, Pierrot makes four jars per month, and each one stays in the town of Vallauris. The history of the jars has led to collaboration between Pierrot and artists from all over France.