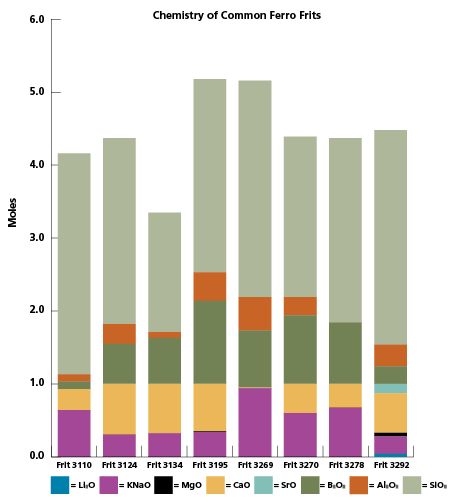 Frits are wonderful glaze ingredients. Getting familiar with frits can help solve problems and improve glazes. The challenge of frits lies in discovering which ones to use in a given situation, and why.

What are Frits? What is a frit? Most simply, it’s a ground glass. However, it’s a glass of a special composition—typically high in flux elements, low in alumina, usually with enough silica to make a stable glass, and sometimes containing boron. Fluxes that dissolve in a glaze slurry can cause problems during glaze firing. That’s why glaze recipes seldom use soluble fluxes. Frits can be wonderful glaze ingredients because they incorporate soluble elements in a glass matrix, thus rendering those elements insoluble. At high temperatures (around cone 10) a useful source of insoluble fluxes that melts rapidly is feldspar. However, feldspars are slow to melt at low- and mid-range temperatures. Frits were originally developed to provide an insoluble source of fluxes for low and mid-range glazes and/or to permit formulation of faster melting glaze recipes. Every frit has a particular ratio of flux elements to each other and, when used, to alumina and also to boron. Enough silica is included to make the frit stable and insoluble in the glaze slurry. The remainder of the glaze recipe depends on the firing method, peak firing temperature, and the clay body the glaze is applied to. However, all fritted glaze recipes require enough clay or other viscosity modifier to suspend the glaze ingredients. Typically at least 10% of a white-burning ball clay or kaolin is used in the recipe. When kaolin is used, the dry glaze surface will be softer and glaze dusting may be a problem. Additional silica may be required in the recipe, since increasing proportions of silica are required as the firing temperature is increased.

Pros Renders soluble materials insoluble: Soda ash (sodium source), pearl ash (potassium source), and borax (boron source) are good sources of the pure elements but are all very soluble unless melted into the glass matrix of a frit. Supplies boron: Boron (B2O3) is a very effective melter at low temperatures in ceramic glazes, but its raw forms are mostly soluble and often inconsistent. Batch consistency: Unlike mined raw materials, commercial frits have specific, known chemical compositions. This makes the effect of a frit on a glaze dependable from batch to batch. Ability to blend oxides otherwise difficult or impossible with raw materials: A frit can supply a specific chemistry that a raw material cannot. For example, a frit can supply all the elements found in feldspar and can be formulated to melt at a temperature too low to melt feldspar itself. Reduces melting temperature and improves melt predictability: Since frits have been premelted to form a glass, remelting them requires less time and energy and permits firing a glaze at a lower temperature. A magnesium oxide frit can be more effective at lower temperatures than sourcing the flux from talc or dolomite. Faster firing: Frits can be formulated to melt quickly and evenly after body gases have been expelled, thus greatly reducing glaze imperfections. The cost of the frit can be offset by the energy saved when firing faster to the same temperature. Fast firing also makes it economically feasible to go to higher temperatures. Wider firing range: In the presence of frits, many stains soften over a wide temperature range as opposed to having a sudden melting temperature.

Cons Expensive: Frits are more expensive than raw materials. However the advantages often out-weigh the costs, such as fewer pieces per firing lost due to glaze faults, or energy savings due to faster firings. So, the processing that leads to the expense is as much a pro as it is a con. Glaze Settling: Glaze recipes must contain enough clay, bentonite, cellulose gum, or a combination of these to keep the relatively dense, coarse frit particles from settling out. When a frit is used in the glaze recipe, careful attention must be paid to the suspending qualities of the glaze slurry.

Which Frit to Use A great way to quickly gain familiarity with a variety of frits is by firing a small amount of each frit side by side in the same firing and then comparing the fired samples to each other. It is best to weigh the same amount of each frit and put each sample in a separate small, unglazed, deep tray or bowl. Compare the visual characteristics such as fusibility, melt, opacity, transparency, fluidity, and stiffness of these fired samples to each other and to their published chemical compositions. Now you have information about the chemistry of each frit and the physical attributes that chemistry produces, information that will help you pick a frit for your glaze.

Developing a Fritted Glaze The easiest way to incorporate or substitute a frit into a glaze recipe is to use glaze calculation software—this software is readily available and has dramatically simplified this task. However, if you want to develop a glaze simply by experimentation, start with the basic materials. All glazes require silica. It’s what forms the glass network. By itself, silica will not melt at ordinary kiln temperatures (silica melts at 3110°F (1710°C)). However, a frit provides necessary flux elements which, when mixed with silica, will make a combination that does melt readily in the kiln. Boron can also be used to speed up silica’s melting so the glaze melting temperature falls into the range suitable for your clay body. When choosing a frit, decide whether you want a glaze that is transparent or opaque, what firing range you will use, and whether you want to brighten or mute any added colorants, then refer to your button tests and the frit chemistry to choose which frits to test. Next, you’ll want to add some alumina to the mix, and alumina is usually sourced from clay. Alumina stiffens the melted glaze, stabilizes and hardens the fired glaze, and increases durability of the fired surface. Additional raw materials can also be added depending on what you want the glaze to look like. Adding an excess of calcium can produce an opaque satin to matte glaze. This is because calcium compounds crystallize from the melted glaze as it cools. Alkali fluxes—sodium, potassium and lithium—all produce brighter colors. Finally, test how well the glaze stays in suspension. If enough clay was added to provide required alumina, the glaze may suspend well on its own. If no more alumina is desired, a high-quality bentonite (used sparingly) can be a good alternative. Bentonites have extremely small particles, thus hold a great deal of water, and in excessive amounts may cause an applied glaze to dry too slowly.

Glaze suspension can be improved, and the glaze surface hardened simultaneously, by adding a cellulose gum. A common gum is CMC (carboxymethyl cellulose) VEEGUM® CER is a commercial blend of bentonite and CMC. Ball clay or kaolin can also be used, in small amounts, in combination with CMC, to suspend a glaze. A useful rule of thumb is to use between 0.25–2% of bentonite and around 0.5% CMC. Begin testing at the low end of the addition rate. These ingredients will have a noticeable effect, so test small amounts of glaze carefully to avoid ruining an entire batch. Note: When adding bentonite, either mix the dry ingredients very well with all other dry glaze ingredients or hydrate it thoroughly with a known amount of water for 24 hours, mix it well, then add it to the slurry as a weight percent of the glaze recipe.

This article was excerpted from the Ceramics Monthly January 2014 issue, which can be seen here.