Appears in the Nov/Dec 2021 issue of Pottery Making Illustrated. 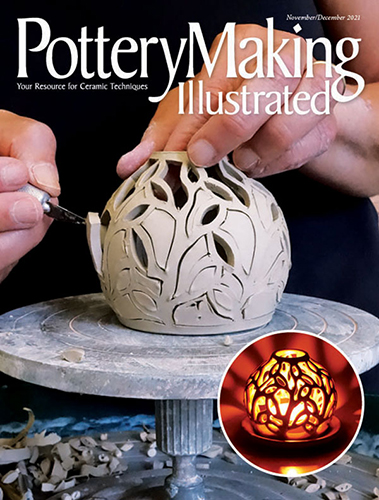 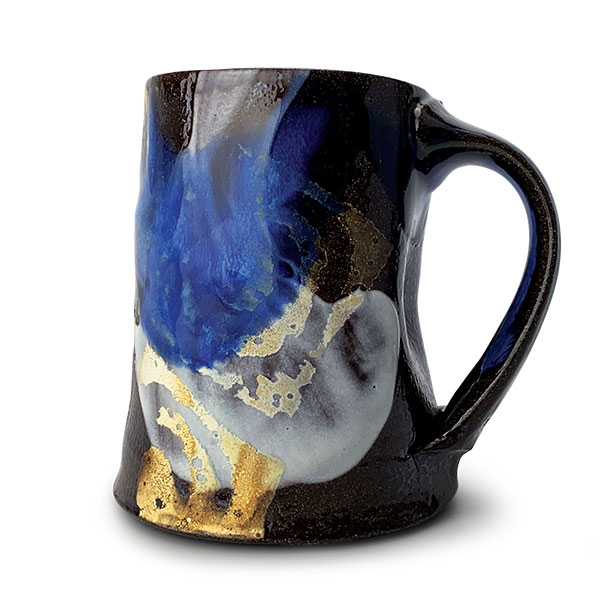 I’ve been enjoying making medium to large mugs because they feel good in the hand and can hold a substantial amount of liquid. I’m inspired by folk pottery from the Mingei tradition as well as the awe-inspiring beauty of the natural places I visit. I tend to work in cycles of 50 or so mugs at a time, accompanied by other forms as well. When I’ve accumulated a substantial amount of ware, it’s time for firing and glazing, which occupies a completely different part of my brain. The aim of the visual fluidity in the glaze is to create a feeling of harmony with the pot akin to natural forces or the atmosphere marking and building upon something. The glaze interacts with the pot with minimal intervention, allowing for a result that highlights the union of the form and surface.

To make the body of a larger mug, I use 18 ounces of clay (1) and for the handle, I use 3½ ounces. I like to wedge and weigh my clay out the night before. I usually cut up two or three bags of stoneware clay and weigh them out in balls so that I have enough clay prepped to get right into the flow the next morning. It is important to me that I’m not fussing over each individual cylinder so that I can learn from the process with each throwing session. 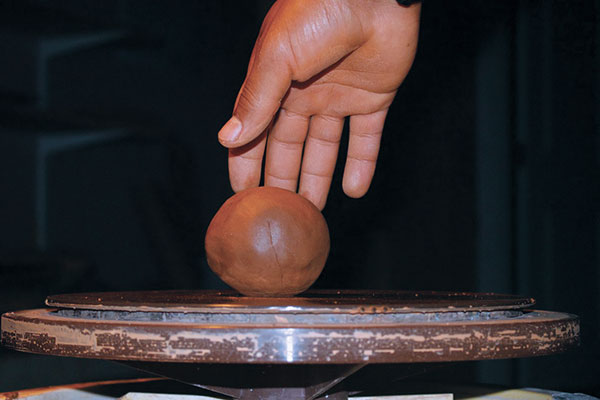 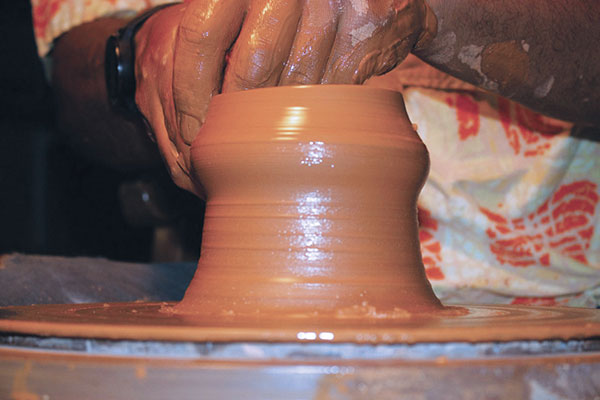 I have a rough size and shape that I aim for and each time I approach the wheel. I tend to cut my first three cylinders in half at the beginning of a throwing session. More often than not, each time, the cylinder is on the thick side on the first try, a little too thin on the second, and relatively consistent at about a ¼-inch wall thickness on the third. I keep these examples in sight while I’m throwing to reference. It is a relatively simple form I’m going for: a bit wider at the base with almost vertical walls slightly tapering in at the top. I strive to create a wall that has substance at the lip and foot and becomes relatively thin in between. I want the form to be substantial in appearance and deceptively light.

After throwing a cylinder (2, 3) give it one final pass with a flexible metal rib to seal in the grog, compress the surface, then create an elegant line that works its way up the pot (4). Next, add an indentation with a stamp just below half way up the side of the pot (5) where the handle will be located. This indentation allows the handle to be more snug to the mug and prevents one’s fingers from being burned on hot coffee.

Finally, smooth the rim with a chamois and give the mug an undercut around the foot with a paint scraper to lift the visual weight off the table. With the wheel spinning slowly, cut the pot off the wheel head using a wiggly wire for intrigue and texture. 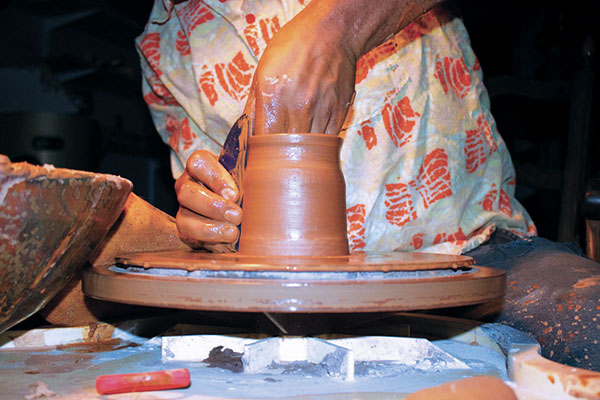 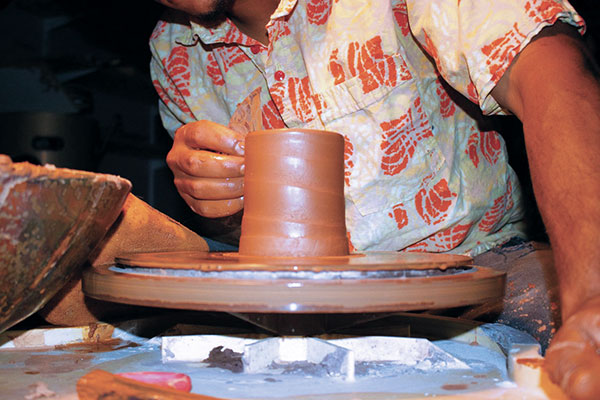 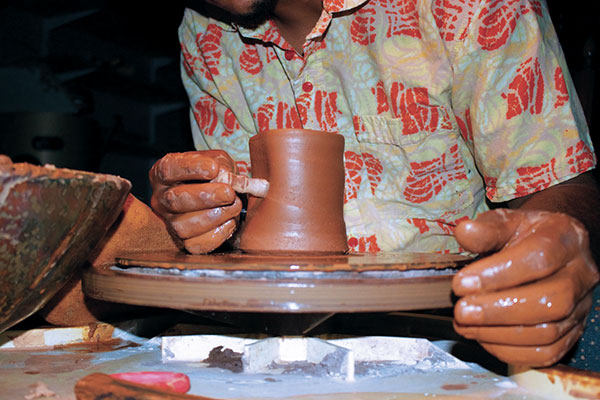 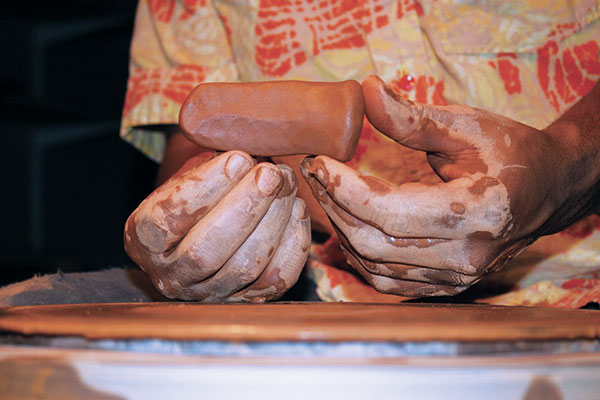 Set the cylinders aside to firm up until they can be flipped over. While flipping them, I push rims back to round if need be, exaggerate the indentation made by the stamp, and give the bottom a gentle pat with my palm to create a slight indentation so that they rest evenly on the foot.

After they become leather hard, roll the bottom corner that makes contact with the table around the edge so that the foot of the pot is smooth and strong. I take care at this point to make a nice little lip to catch glaze drips, though I usually like the burr or lip at the bottom to be subtle.

Pulling Handles Off the Pot

To make a handle, roll a 3½ ounce ball of clay between your hands, and then throw it down a couple of times until it forms a slightly tapered rectangle. Grab the bigger end between your index finger and thumb and tap the clay into an oval dome shape. Squeeze the clay up and away from this point, then taper the edges (6).

Once you have a slightly tapered stub that has a smooth end to connect to the cylinder, paint both attachment points with a little vinegar and push the handle in place on the mug, making sure to compress and support the wall of the cylinder from the inside (7). With a little bit of water on your fingers, smooth the connection further, aiming not to break the line that defines the handle from the pot and then begin pulling (8), being careful to not to pull the handle off the pot! 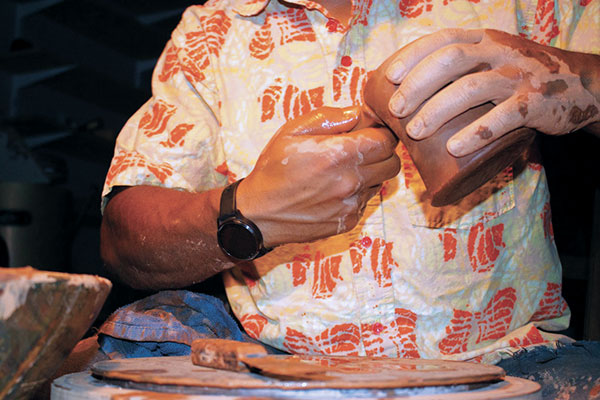 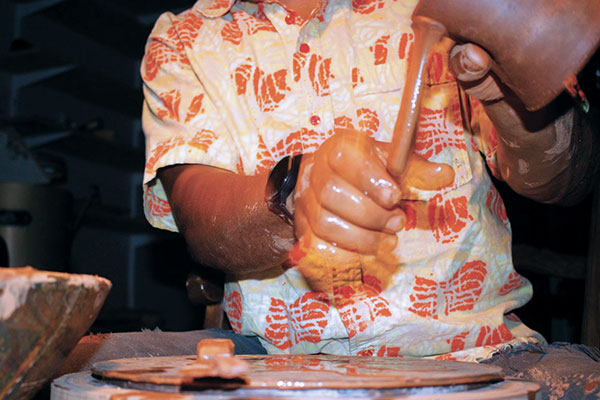 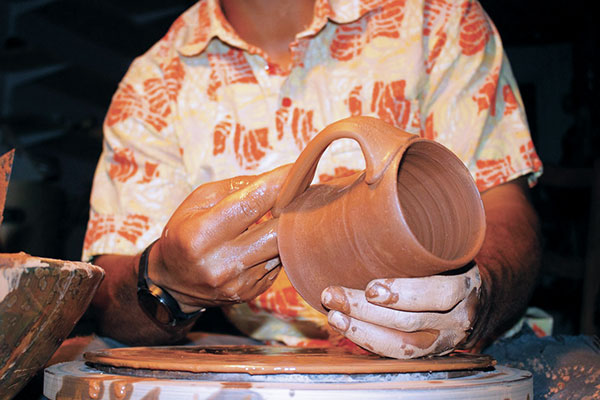 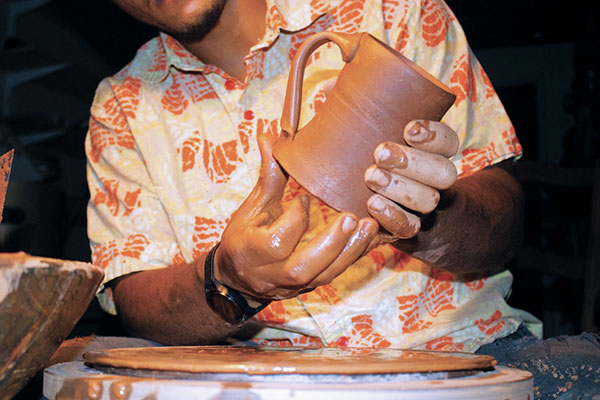 Aim to make the attachment points about ½ inch and the thinnest point in the middle about ¼ inch, with a smooth taper all the way through. When the handle looks good and hasn’t been overworked, place it toward the bottom of the mug, snip any excess clay with your fingers (9), and smear the free end onto the cylinder in a graceful way so as to create a fish-tail effect (10).

Clean up any clay off the bottom of the mug and try not to fuss with the handle other than using one finger to lift the bottom quarter of it away from the mug (11). When first attaching it to the pot, the handle can end up hugging closer to the wall than I like visually or practically, and lifting the bottom helps to alleviate this.

When it is time to start slip decorating, I aim to emotionally let go of my initial investment of time and energy in order to let inspiration flow. It takes being in the right head space for me to make intentional marks with fluidity. 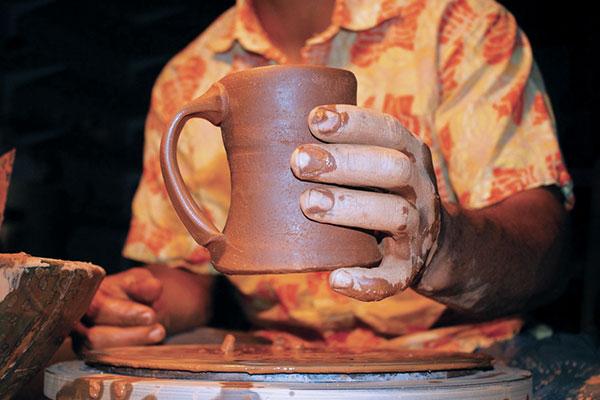 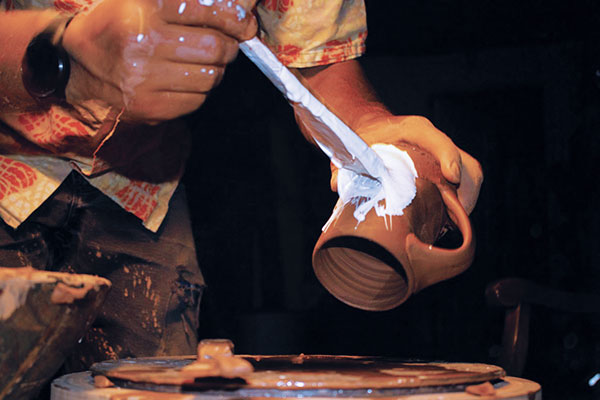 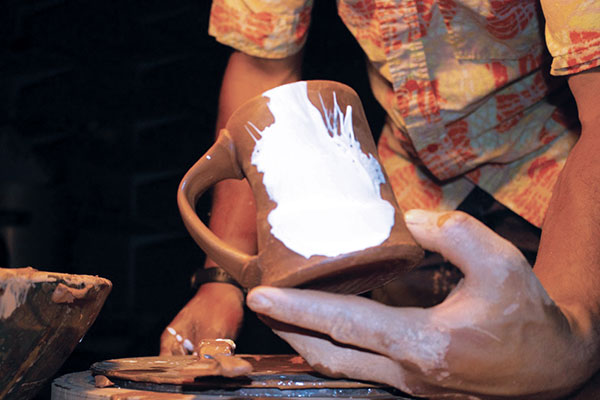 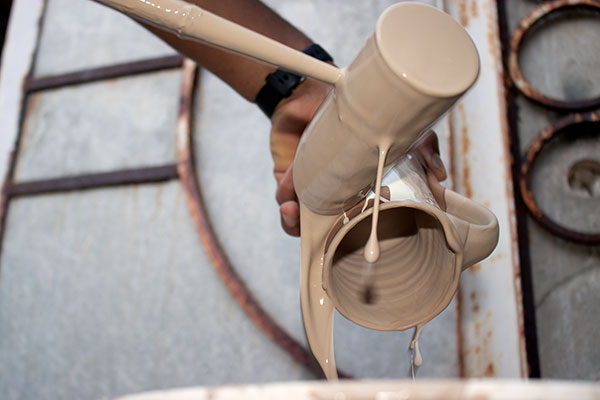 I decorate with a hake brush (12, 13), a sponge stamp, and a bucket of porcelain slip. I have also used jet black underglaze to write text such as “Black Lives Matter” and “say their names” on the surfaces of forms. However I’m decorating the pots, I feel it is a cathartic and emotional process and I often enter a flow state and become very excited when I make new discoveries.

Line quality is very important to me and I aim to create fluidity and grace in my mark making. My newest treasure has been the batik fabrics my father has been bringing back for me from Ghana, and I’m excited to learn more about those patterns and motifs as well as their symbolism and story. 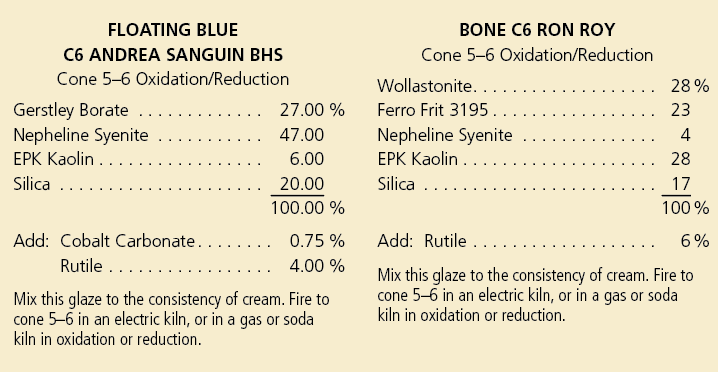 After the decoration is complete and the mug is dry, bisque fire it to cone 05 and then apply glaze, trying to keep the glaze just as fluid and gestural as the pot and decoration. My glazing is heavily inspired by the natural world as well as my interest in atmospheric firing. Apply a thin liner by spritzing the inside of the cup with water, which causes less glaze to be absorbed, before pouring glaze into the interior. Then, a thick swoop of the same glaze is splashed over the outside while holding the cup at a diagonal angle to keep the glaze from moving too much. I’ve been using a metal ladle to apply glaze recently which is nice for keeping your hands clean (14). I aim to connect the handle to the cylinder with glaze and avoid bringing the glaze all the way to the bottom as it has a propensity to run in the firing or drip from the handle to the kiln shelf. I occasionally layer a bit of glaze on the lip. These pots are fired to cone 6 in an electric kiln, and have also been highly successful in cone-6 soda firings both in reduction and oxidation. 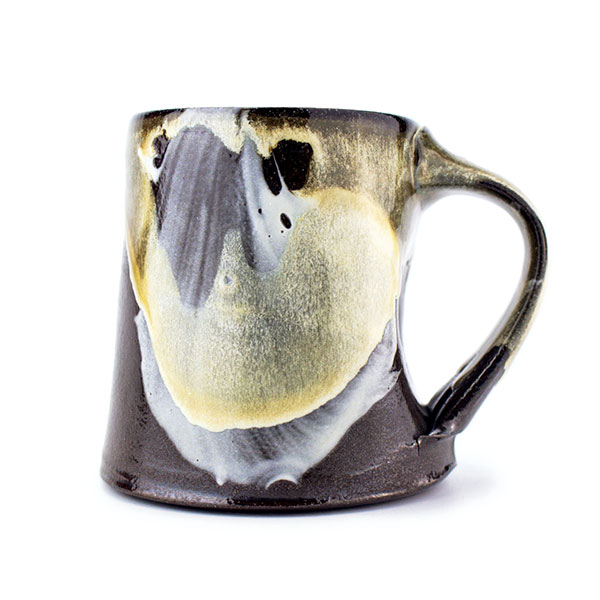 Dwayne Sackey earned a BFA from Oregon College of Art and Craft in 2019. Merit-based scholarships supported him: the Gregori Jakovina & Larry McDonald Scholarship, the Ellice T. Johnston Scholarship, and the OCAC Community College Scholarship. Sackey is a recipient of the 2021 Studio Potter grant for apprenticeship alongside his mentor Chris Baskin.