Timeless and of its Time Steven G. Cheek

Appears in the May/Jun 2019 issue of Pottery Making Illustrated. 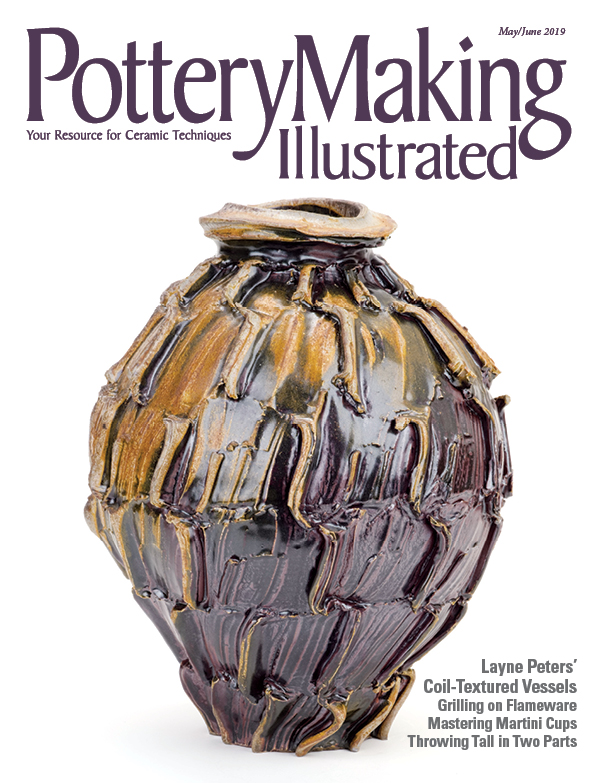 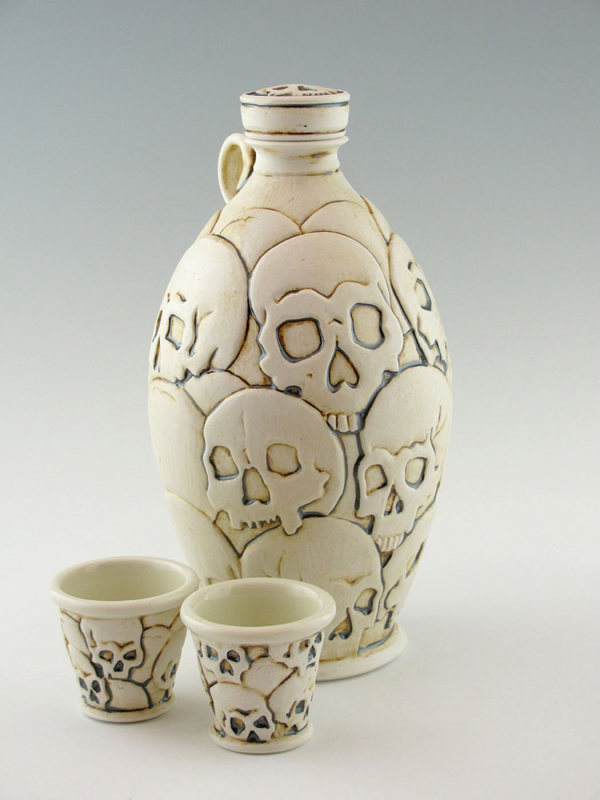 My work is a reflection of my interest in the marriage of the traditional vessel and a desire to address social and political issues. My training as a potter began as a utilitarian vessel maker, creating simple objects for everyday use. I wanted to create beautiful things that people would use in their daily lives and was seduced by the Mingei philosophies of studio potters like Warren MacKenzie that translated the Japanese tradition for an American audience. For many years my work was a homage to that aesthetic.

When I was accepted into graduate school at Edinboro University in Edinboro, Pennsylvania, I recognized that my work needed something to stand out from other traditional vessel makers. I began to explore mark making on the surface of my pots, first sgraffito and mishima, and then some low-relief carving. The imagery was abstracted and unrefined, but I was beginning to develop a technique of how to remove clay.

During my first year in graduate school my carving improved, and the imagery was developing as well. The abstracted patterns and shapes were replaced by floral, leaf, and other botanical imagery. During this time, the world was at war, the US had invaded Iraq, and I, like many, was tuned in daily to the news. In the evenings one of my professors, Steven Kemenyffy, would come into my studio and we would talk about my thoughts and interests and why was I making the work that I was. He questioned the disconnect between my deep interests in politics and social justice issues and the hours that I was spending carving leaves in clay. His constant nudging and encouragement challenged me to begin to tackle ideas in my work based on what we would talk about. 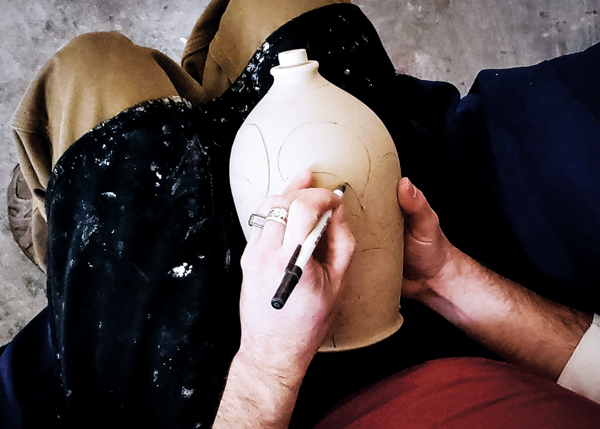 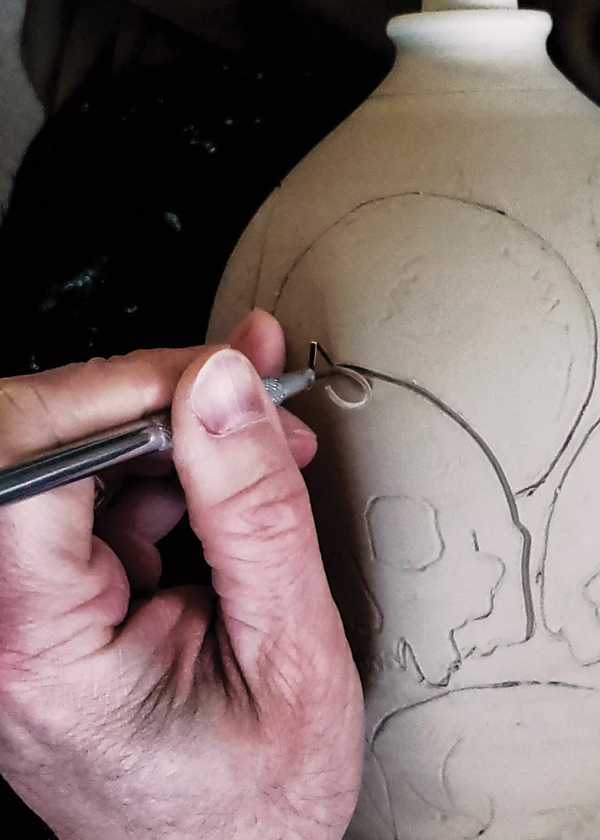 Like many artists who address political or social commentary, my early pieces were one-hit wonders, diatribes against a president that I didn’t like and policy decisions that were making the world uglier and less safe. The use of text and obscure imagery was hard to translate to the viewer and I was encouraged to find a way to distill the ideas. Another professor opined that he didn’t want to have to read my pots and tasked me with a goal to find a way to distill the ideas into visual imagery that would tell a story. I began to do more and more research with each piece, looking at source imagery, reading articles, and trying to find a way to find the underlying universal note of resonance in each story or issue. I spent time exploring sculptural forms to address my concerns yet found that it was the intimacy of the functional vessel that spoke to me and felt like it was the right vehicle to convey the message to my audience. I continue to explore how combining the traditional vessel with surface carving juxtaposes the beauty of classical forms and imagery that may confront the viewer.

Each piece begins with an idea. In the quest for imagery to convey that idea, I research newspapers, photojournalism sites, and many other open-source databases to find iconographic images that can be used. In the case of my skull carvings, the source imagery references the Cambodian Killing Fields. This image becomes a placeholder for all of the mass graves and genocides that have and continue to happen. The underlying idea is confronting the viewer in a subtle way about how humankind treats their fellow man, the mark that we leave behind, and how impermanent life is. It’s my interest to create a visually interesting piece that both attracts and repels the viewer. I am interested in how the combination of the imagery and a vessel for daily use can act as a conversation starter. 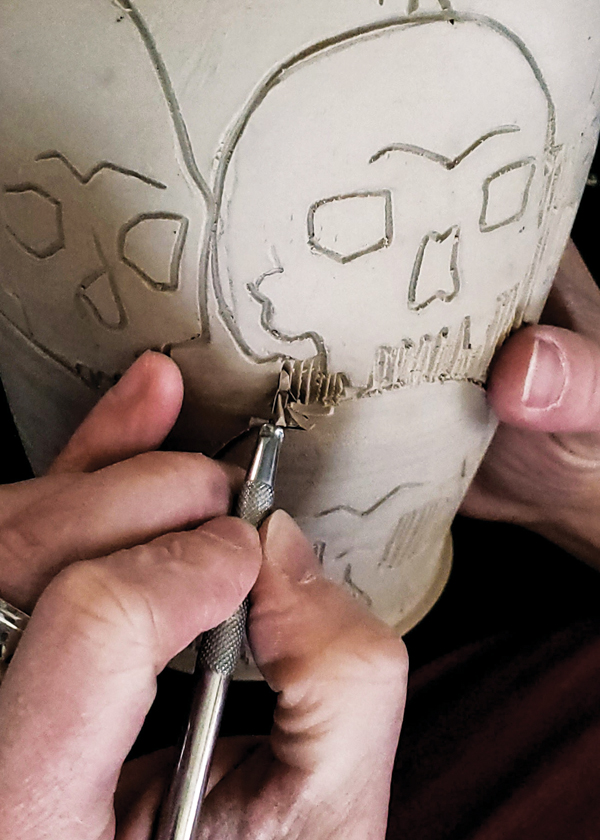 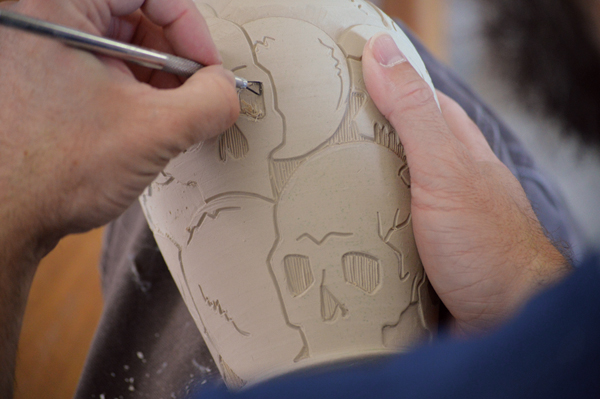 Living in Kentucky, the bourbon bottle is a form that people from all walks of life immediately relate to. It’s both an object of use and contemplation, and an ideal size for me to work with. Once the image is selected, it’s drawn on the surface of a leather-hard piece. If you’re carving on a wheel-thrown form, it’s helpful to throw the piece a bit thicker than you would normally. I use an old ballpoint pen that no longer works to draw on the image, this allows me to lay out the imagery without permanently marking the clay (1). 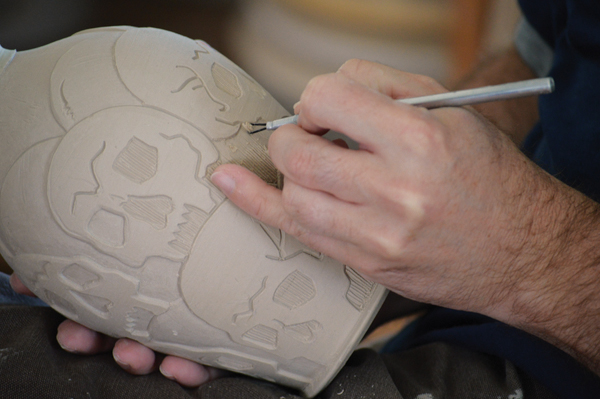 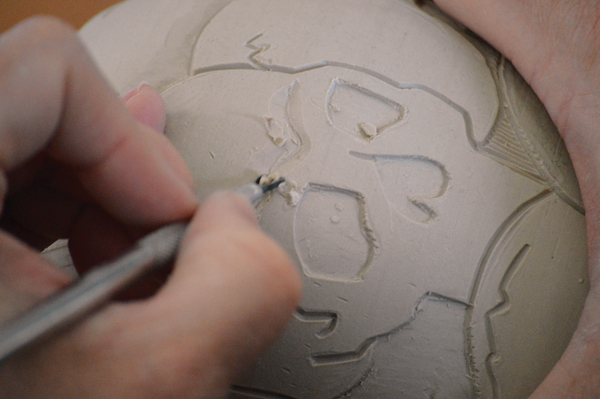 Next, I use an angular carving tool to cut into the piece, outlining the whole image (2). Begin to remove the clay from the areas that will be the deepest by first roughly gouging clay with a loop tool (3), and then using a flat carving tool to remove the remaining clay (4). After the deepest level of clay has been established, the area is cleared and smoothed of marks.

The next step is to begin to define and shape the middle and foregrounds of the carving (5–7). This process of creating a low or bas relief is unique in its ability to imply a level of depth and detail in a shallow field. Using the carving tools, clay is removed in the middle field, shaping and molding the image in a way that provides the illusion of greater depth. This process is the part that takes the most practice and experience to master—removing the correct amount of clay, adding just the right amount of detail to the shallowest field. Each of these steps becomes more and more involved and detailed as your skills develop, so keep practicing. Detailed carving can take many hours and it’s helpful to have one or more damp boxes that you can store your piece(s) in as you work. 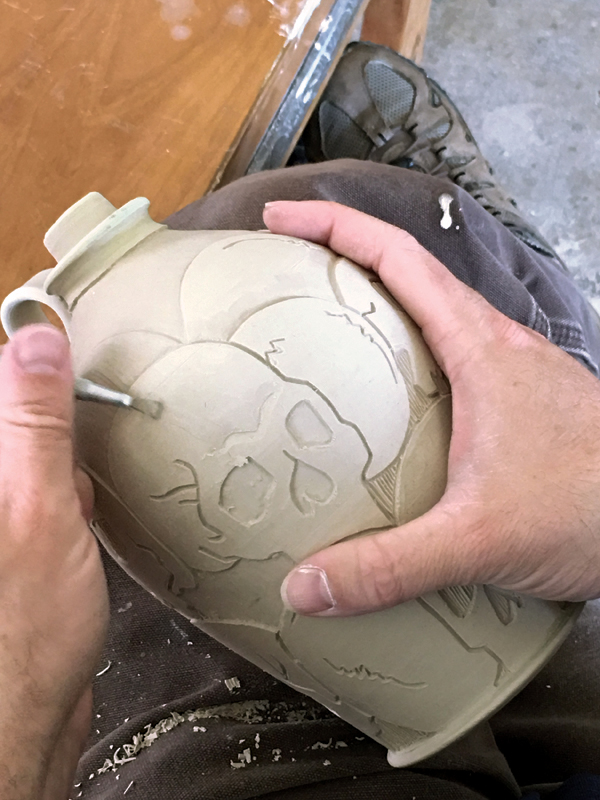 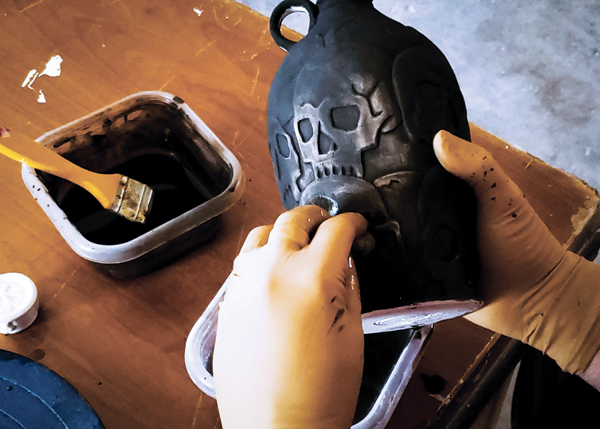 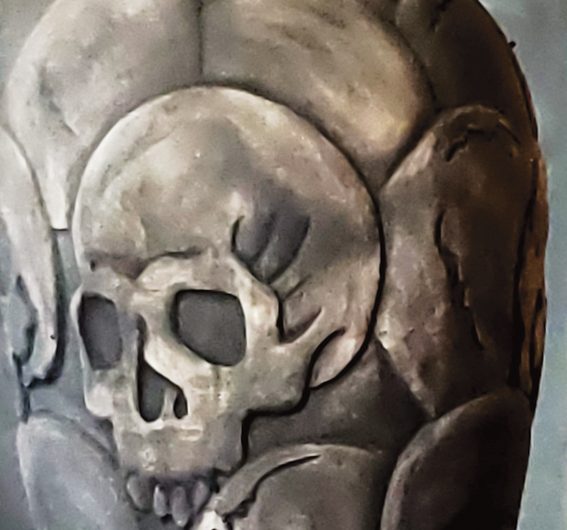 After the carving is finished, sanding the piece with a green scrubbing pad can soften the edges and give the piece a more polished look.

Once the piece has been bisque fired, there are several different glaze and surface treatments that I use on my forms. Many of my pieces are glazed with traditional celadons and other translucent glazes. I also use a manganese dioxide wash that, when fired, creates a bone-like surface that enhances the imagery of the Killing Fields pieces. 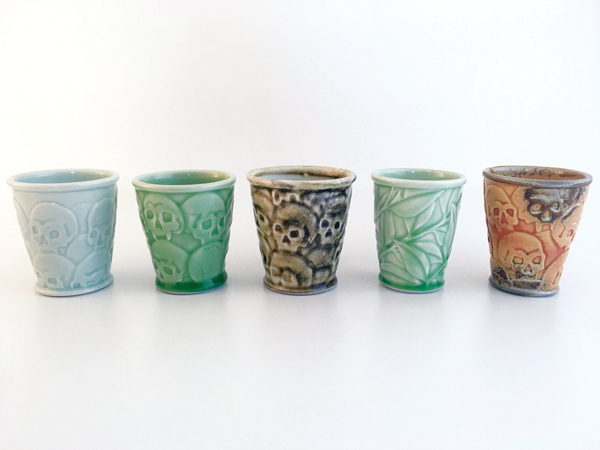 Add four tablespoons of manganese dioxide to two cups of water and stir to create a wash. This is enough wash to use on several forms. Apply it to the bisque-fired piece with a brush (8). Caution: Wear protective gloves and a dust mask while handling the manganese dioxide.

Let the wash dry, then wipe away some of it with water and a clean sponge (9). Experimenting with how much wash to remove can create different effects and results. If you want a mostly white finish, remove most of the wash, leaving a heavier application in the edges and deep recesses (10). 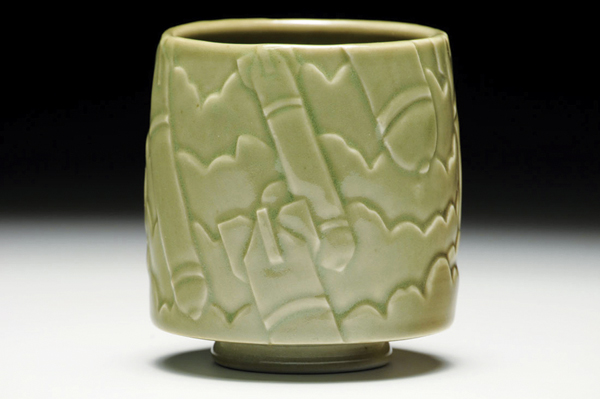 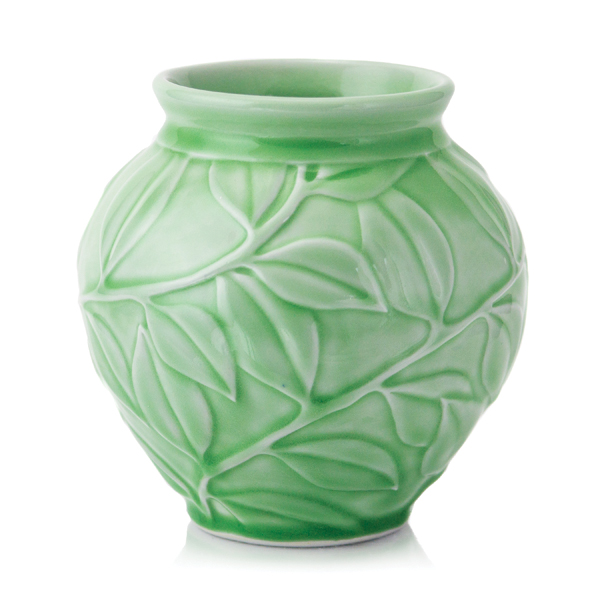 Steven G. Cheek is a studio potter living in Louisville, Kentucky, where he is the director/artist in residence at the Mary Anderson Center for the Arts. He received his MFA in ceramics from Edinboro University of Pennsylvania, and has taught at the University of Louisville, Georgia State University, and University of Tennessee Chattanooga. To see more visit, www.stevengcheek.com and @stevengcheekceramics on Instagram.