Appears in the Jan/Feb 2020 issue of Pottery Making Illustrated. 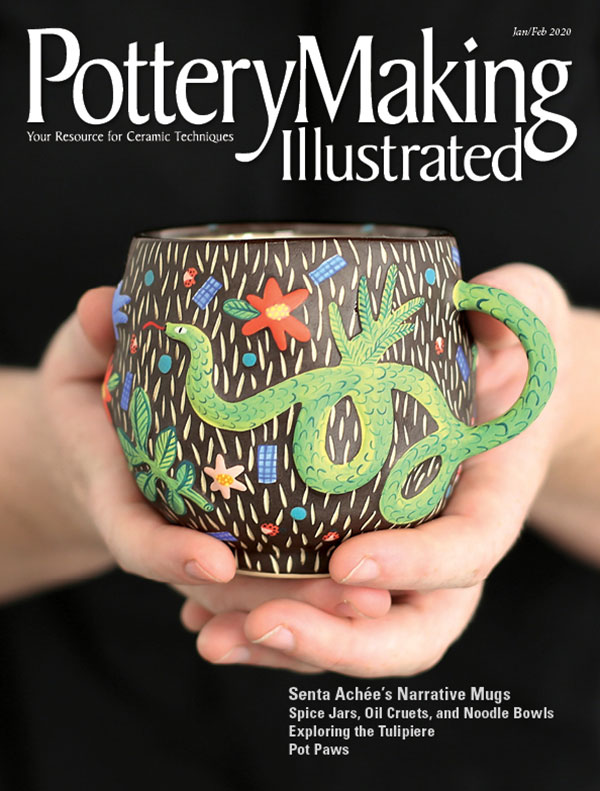 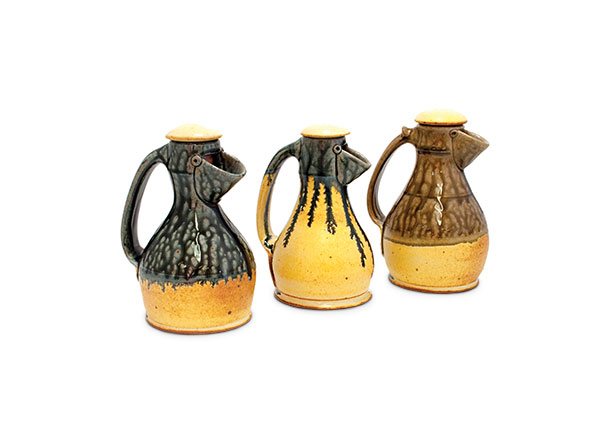 Like a lot of my work, my oil bottles are a solution to a problem. When first attending potlucks during my nearly 3-year apprenticeship with Mark Hewitt at his pottery in Pittsboro, North Carolina, I needed a sturdy pouring bottle to pair with my oven-ready casserole. This oil bottle is a modified version of the coffee pot I learned to make while working for Hewitt. The long neck and stopper eliminate the need to stir the dressing to blend the ingredients it contains prior to pouring. A good slosh or roll of the wrist will mix the dressing together with ease.

Weigh out 1½ pounds of clay and form it into a ball. This bottle is thrown on the wheel, but not trimmed, so make sure to compress the bottom thoroughly. After opening the ball of clay and establishing the floor, but before pulling up the wall, make a clear distinction between the floor and the wall with your fingernail. This marks the floor’s completion and gives a finger hold to begin pulling the wall up. After every pull, which should end in a tapered cylinder, compress the lip. Keep the lip and the foot of the cylinder centered. Finish pulling the wall as high as the clay will allow, continuing to compress and form the lip. 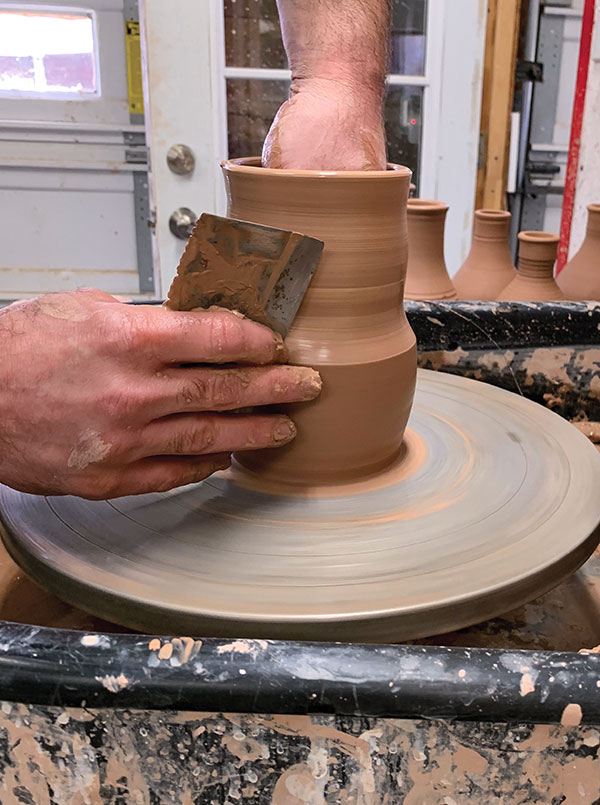 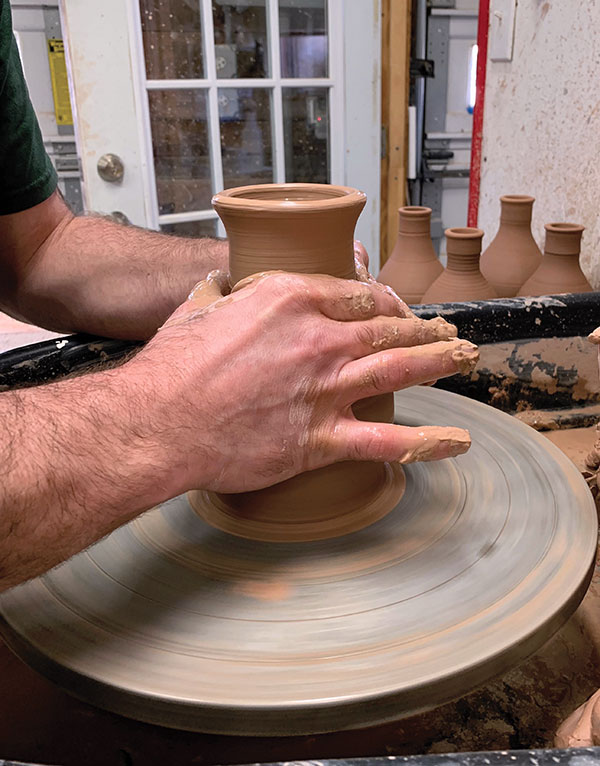 Once the cylinder reaches the desired height, use a stiff rib to remove any excess clay at the foot. Use the same rib to stretch the clay at the bottom of the form into a belly (1), and remove any extra water from inside the bottle using a sponge. Next, form the neck of the bottle by collaring it with your hands held on either side in a C shape and pressing in as they move up toward the rim (2). Compress the rounded lip. As the neck is collared in and is pulled up, it tapers in above the belly of the bottle. The neck will need to be pulled up to thin the clay during the collaring process.

Finish the surface of the bottle with a soft flexible rib (3) and run a chamois over the lip to smooth it. Then, use a fingernail to reinforce the line between the foot and the start of the belly curve (4). Lastly, draw decorative banded lines with a wooden tool, then use a wire tool to cut the bottle off of the wheel head. Allow the bottle to spin only one full rotation as the wire tool completes its cut. This should create a subtle spiral on the foot caused by the grog in the stoneware getting pulled around by the wire. Using dry hands, pick the bottle up and place it on a board to begin drying. Once the bottle reaches a leather-hard state, turn it upside down and smooth the edge of the foot with your finger (5). 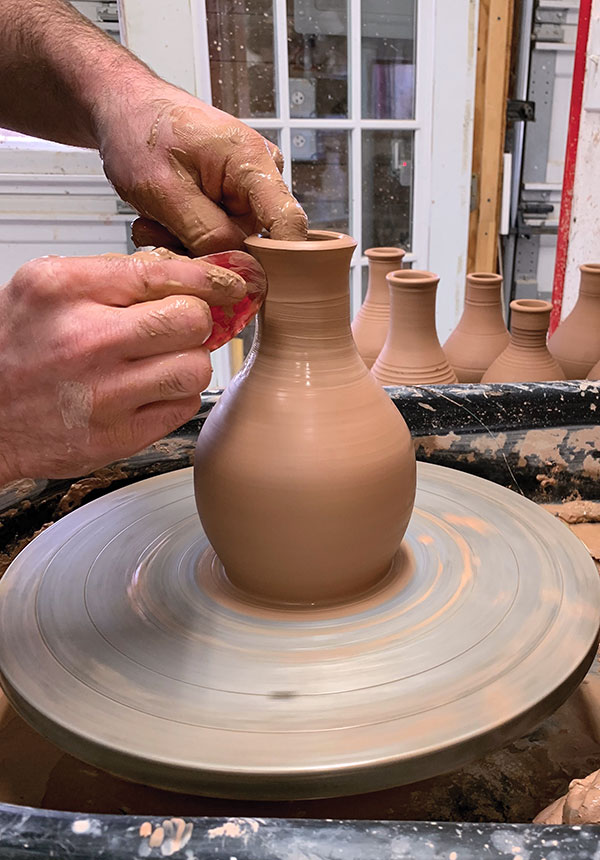 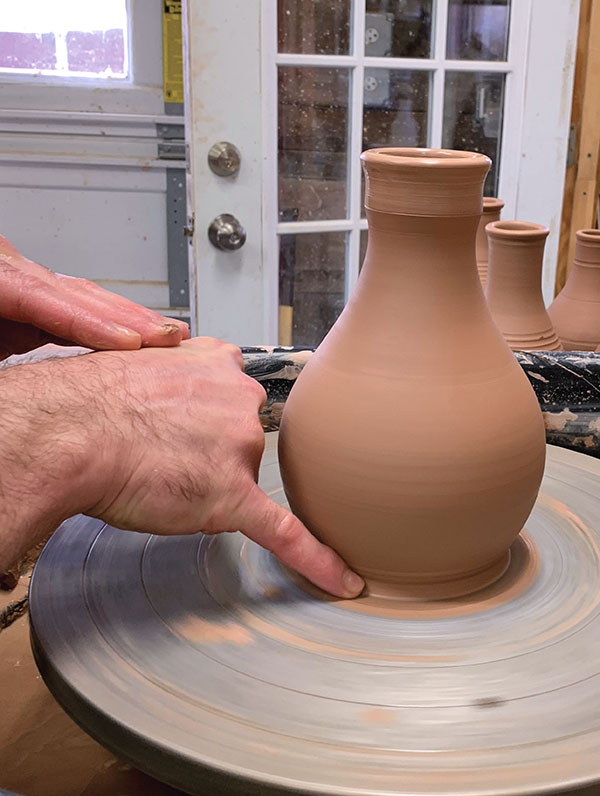 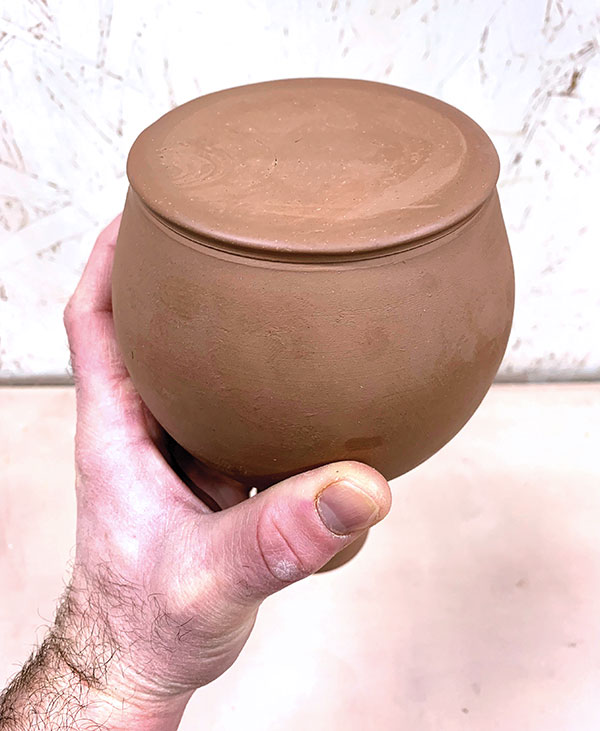 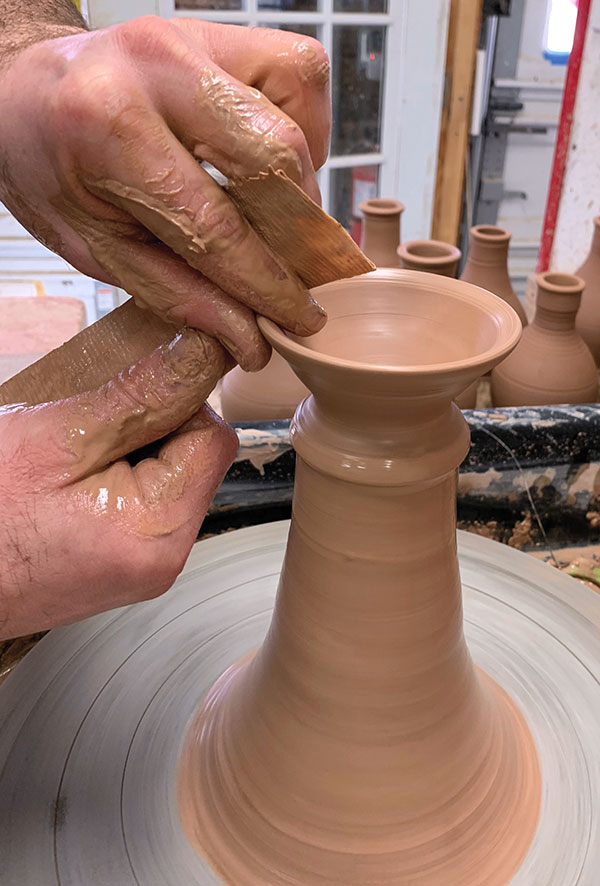 Throwing the Stopper and Spout

The bottle stopper and spout are thrown off the hump. Roughly center the whole hump and isolate a small mandarin-orange-sized ball on top. Center the isolated ball of clay and throw a small bowl, approximately 3 inches wide and 1 inch deep (6). This bowl should have a tapered lip to later pour from. Use a rib to clean up the bowl and a needle tool to horizontally cut it off of the hump (7). After placing it on a board to dry, immediately pinch the bowl with a finger and thumb on opposite sides into what resembles an open fortune cookie (8). This alteration sets the curve of two spouts from the one bowl.

Next, create the mushroom-shaped stopper by first throwing the cap of the mushroom, then narrowing the clay down into a 1-inch-long stem. Measure the inside diameter of the bottle with calipers and transfer this measurement to the stem of the stopper (9). Keeping a 90° angle between the cap and the stem allows the stopper to sit on the bottle’s lip. Again, use a needle tool to cut the stopper off of the hump. 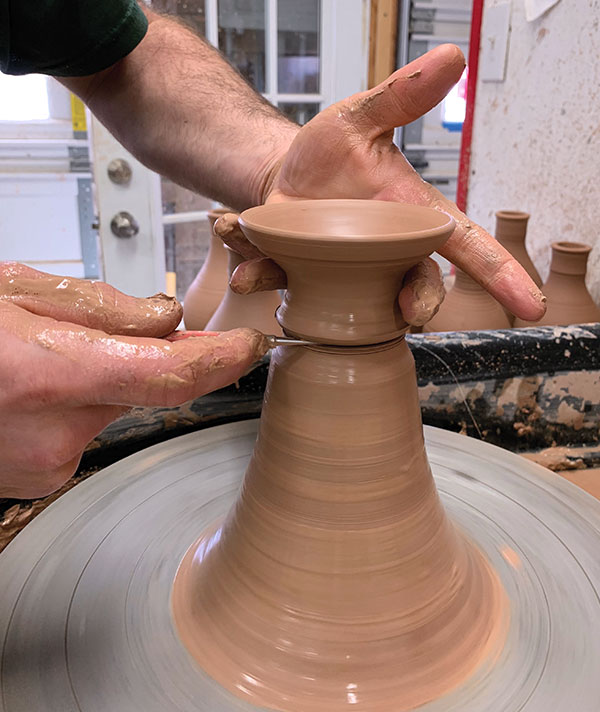 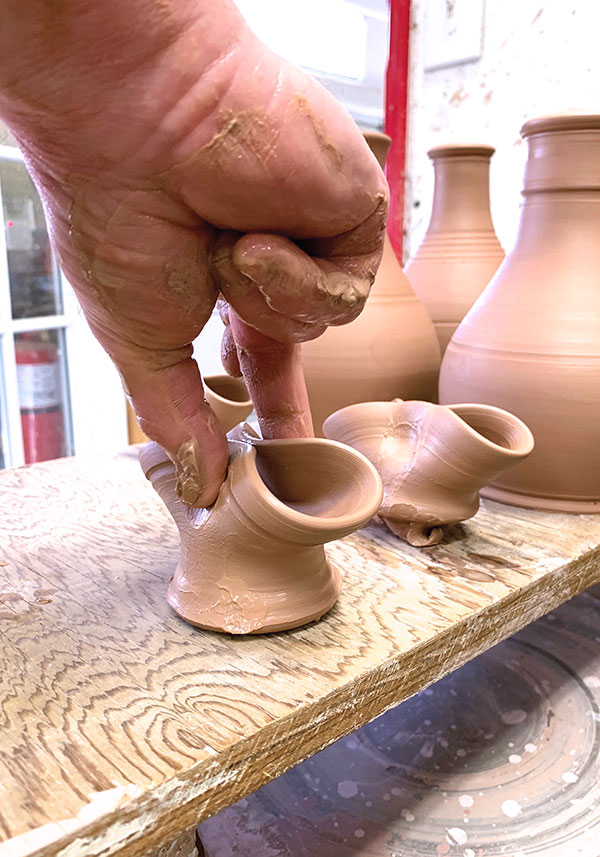 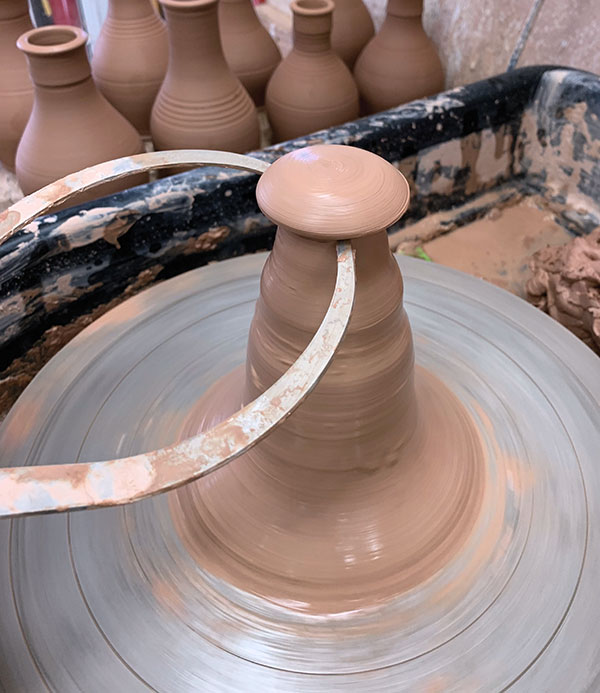 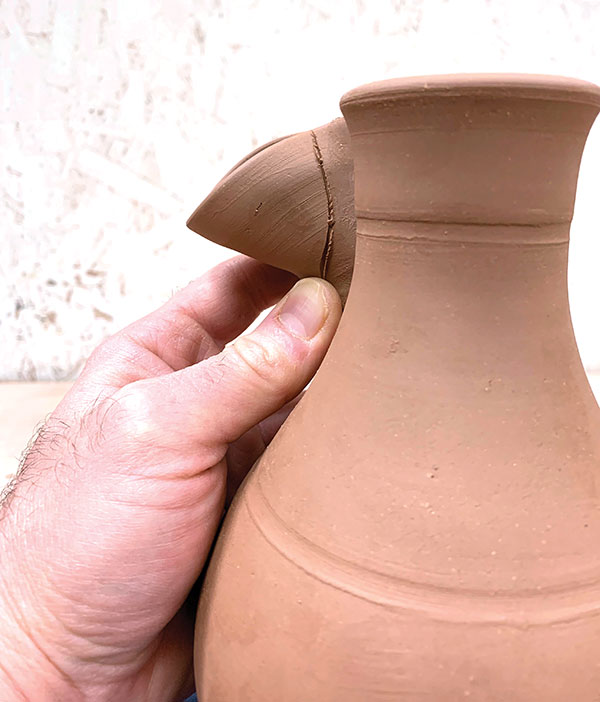 Hold the spout bowl behind the profile of the bottle’s neck and trace the desired cut line for the spout’s attachment edge with a needle tool (10). After the spout is cut from the bowl to fit the bottle’s neck, trace this curve onto the neck of the bottle. Then, cut the curved opening on the bottle with the same beveled angle as the spout, so a smooth pouring channel is created once attached. Rehydrate and compress the edge of the opening for the spout on the bottle (11). Repeat this technique on the spout. Immediately align and attach the spout to the cut opening on the bottle, making sure to fully compress the seam from both the interior of the bottle and exterior of the spout. Reinforce the exterior seam with a wooden tool. Lastly, add two small balls of clay on each side of the spout to create faux rivets at the top corners (12). 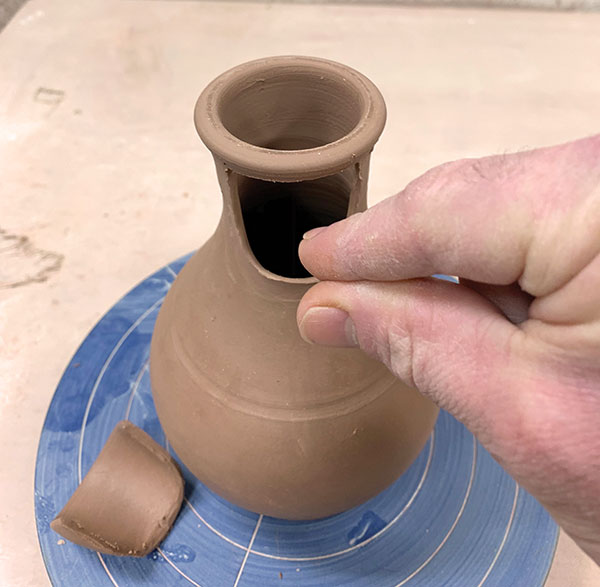 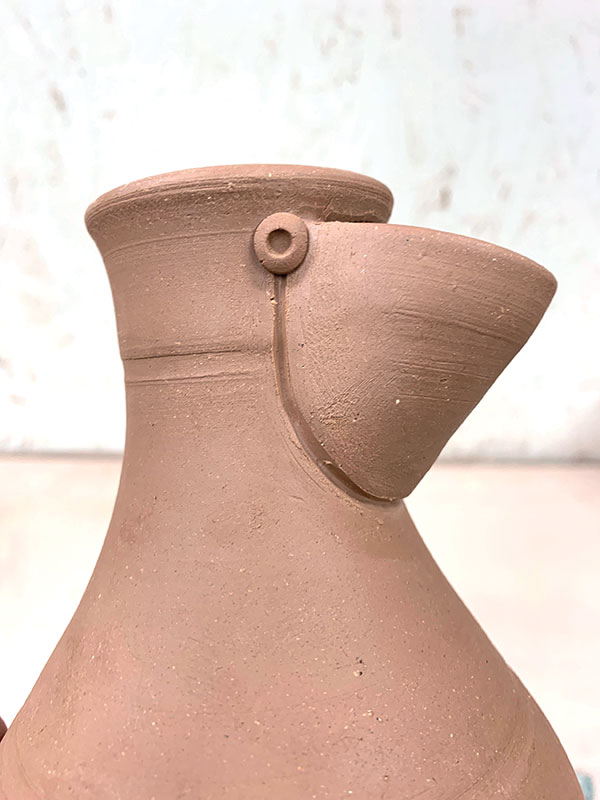 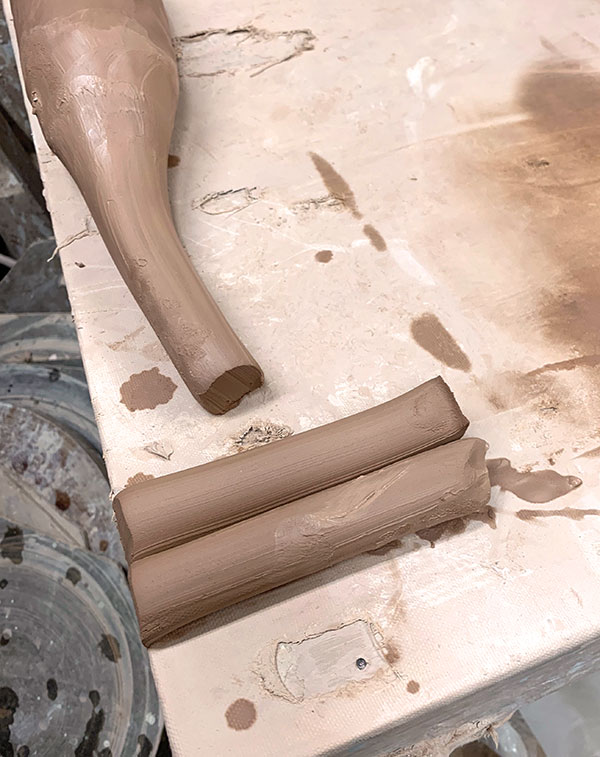 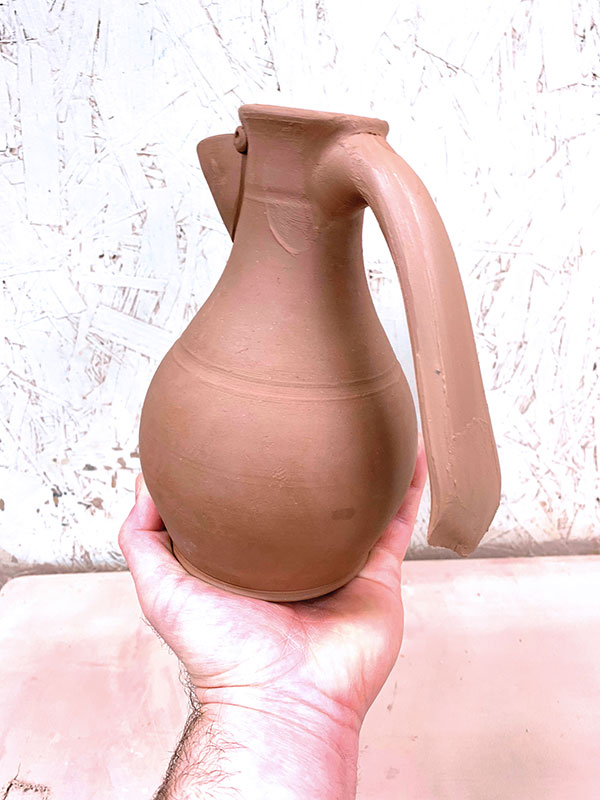 Shape roughly 5 pounds of clay into a large carrot-shaped form. Hold the thicker end with one hand, keeping it as dry as possible until all coils are pulled. Using fresh water and the other hand’s thumb and forefinger start pulling round coils, approximately 5 inches long. The edge of the work table is used to both create equal lengths when making multiple bottles and cut the coils off (13). Add some slurry to one end of a clay coil and attach it to the top of the bottle neck. Once attached to the neck, begin pulling the handle, transforming the round coil into a flattened oval shape (14). Start at the bottom of the coil and gradually move up the handle, increasing the width and length with each pull. When finished, the profile of the handle should resemble a C shape. Add some faux rivets to the handle for the ash glaze to pool in.

The stopper completes the form, adds weight to the top of the bottle to help balance the liquid under the weight of the handle, and acts as a place for the thumb to rest while pouring (15). I use a stamp that reads “GUZ” to compress and finish the bottom of the stopper. Glaze the bottle, including the lip, and fire the glazed stopper separately. 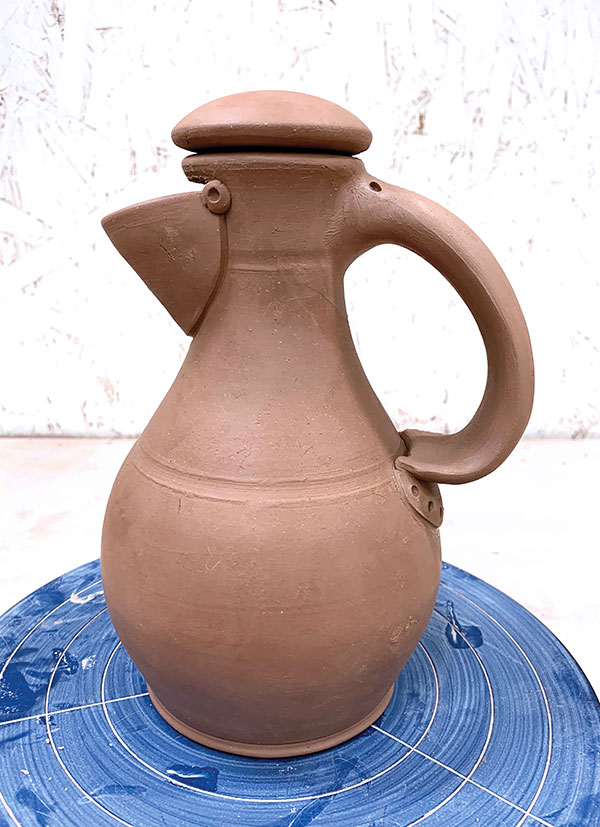 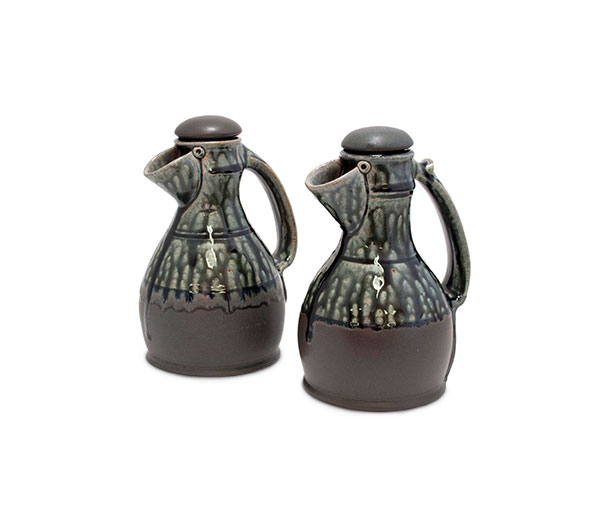 To finish the bottle, I use a fluid ash glaze above a stable glaze applied to the lower section of the pot. The wood ash (sourced from my wood stove) is washed, sieved, and dried before being added to the recipe. This drippy glaze takes time to hone; however, the stable glaze gives a backdrop for the juicy, wet rivulets to drip over.

Both the prolific nature of pottery and problem solving inherent in the medium bring me gratification. This oil bottle is an example of the satisfaction I glean from designing and creating handmade pottery. The ability to explore the range of curves, proportions, and attachments involved in the oil bottle only increases my enjoyment of time spent in the studio. Once finished, including this piece among a table full of food also brings me comfort. 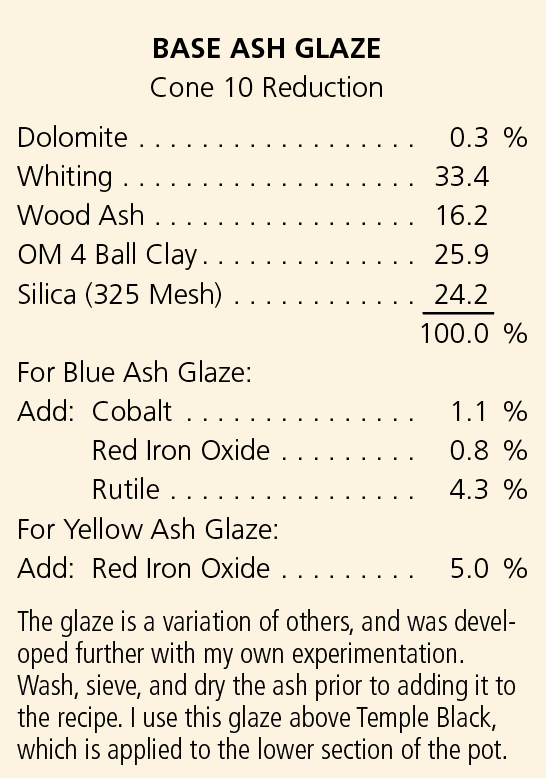 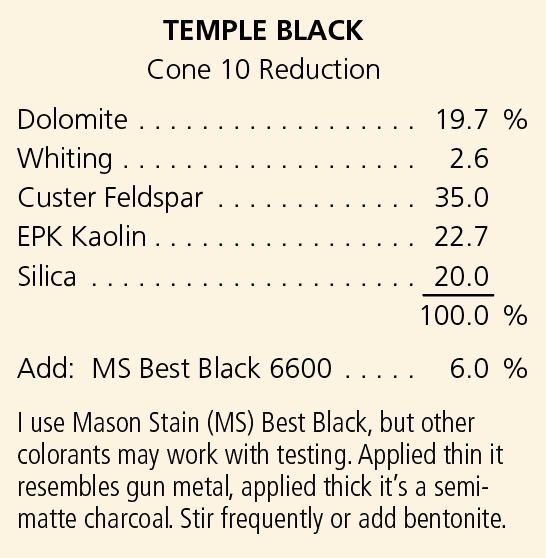 Seth Guzovsky received a BFA from Syracuse University and apprenticed with Mark Hewitt in North Carolina. He now owns and operates Poor Farm Pottery in Floyd, Virginia, with his wife, Andrea Denniston. To see more of his work, visit www.poorfarmpottery.com.