Appears in the May/Jun 2018 issue of Pottery Making Illustrated. 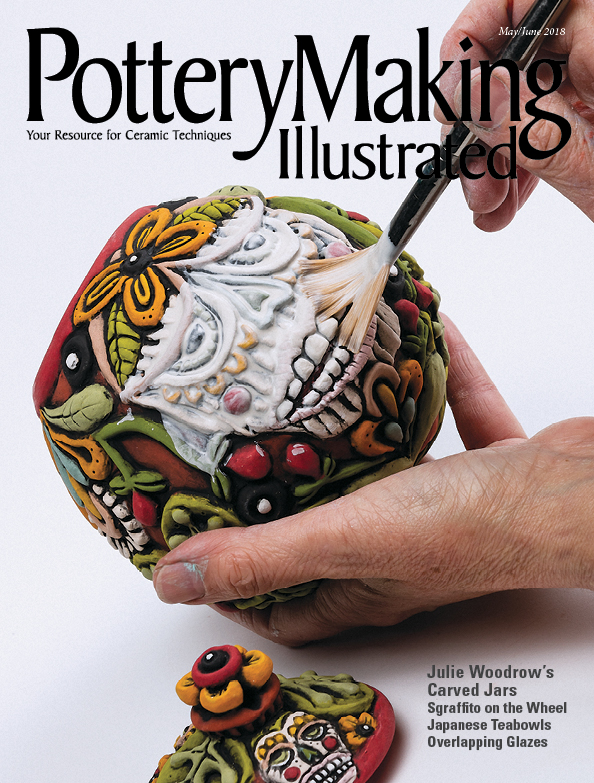 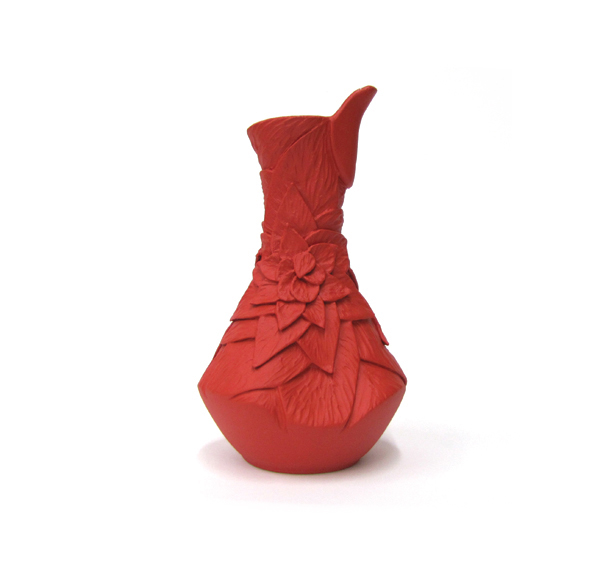 My carved pitcher form came about when I was doing research for the Companion Gallery’s call for entry to Last Call II. I was looking for a new form that would stand out and would fit my personal style. I started looking at different types of pitchers and wine decanters. When I was walking through my local grocery store, I noticed this vase with a wide bottom and a long skinny neck. It instantly clicked that I could turn that shape into a pitcher with a couple of minor tweaks. I went home, sketched out the form, and started throwing. After a few attempts, I had the basic form figured out. I altered the form until it had an organic shape and flow, and added carved patterns, which helped move the viewer’s eye around the piece. I throw my form a little thicker so it won’t collapse when shaping and I need the walls to be thick enough so that when I carve, the viewer thinks I have added clay rather than taken it away. I make sure the piece is not too thick since this is still a pitcher that’s meant to be used, not just a paper weight. 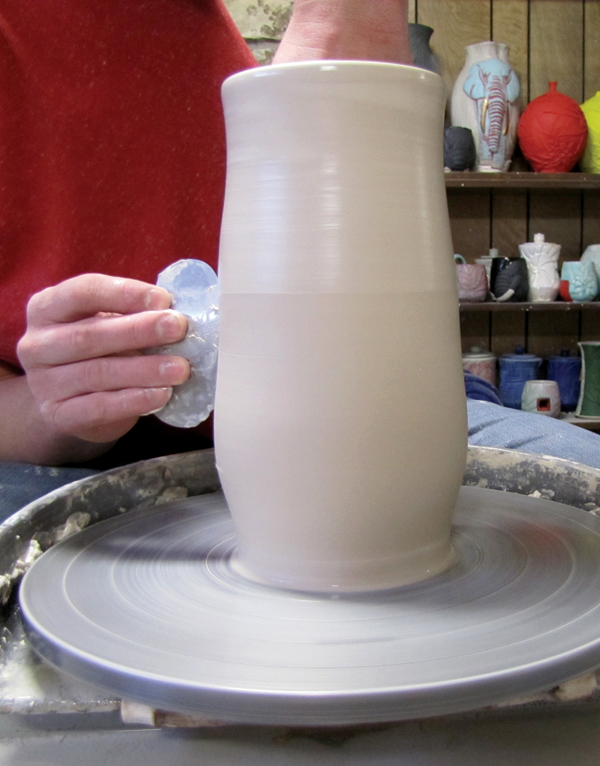 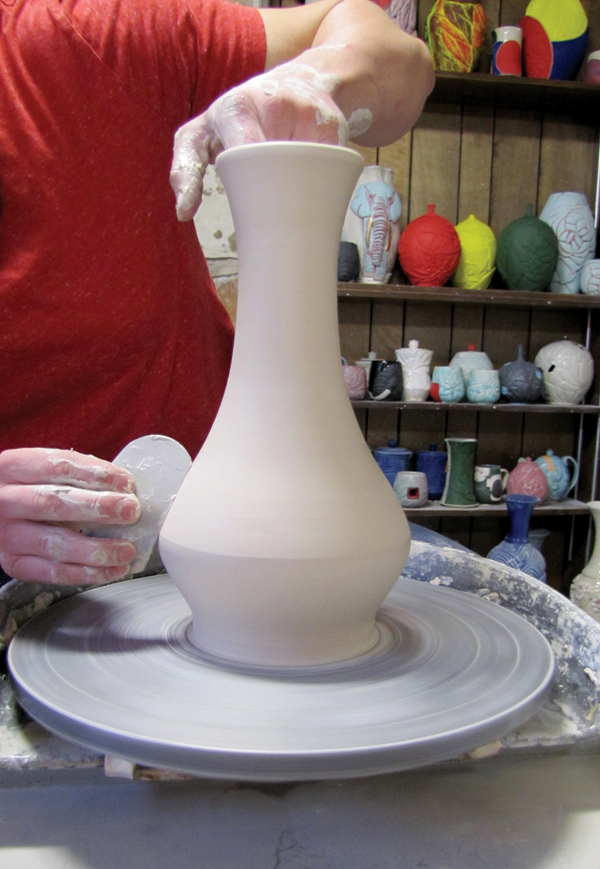 Throw a cylinder to your desired height, then use two metal ribs—one held against the outside, and the other held at the same spot on the inside (1) to double rib the walls. This helps to compress the clay, remove extra water/slip, and remove as many throwing rings as possible, so they don’t distract from the form, design, carving, and glazes. Compressing and getting rid of the throwing rings, understanding the thickness of the walls, and placement of the hard line (where the form transitions from convex to concave curve) will make or break this form. After the form is double ribbed, start to shape the piece by pushing out the bottom and collaring in the top. When the form has taken shape, put in a hard line at the transition by pushing down with a metal rib toward the wheel head (2) then up from the bottom (3) to give it a hard line. 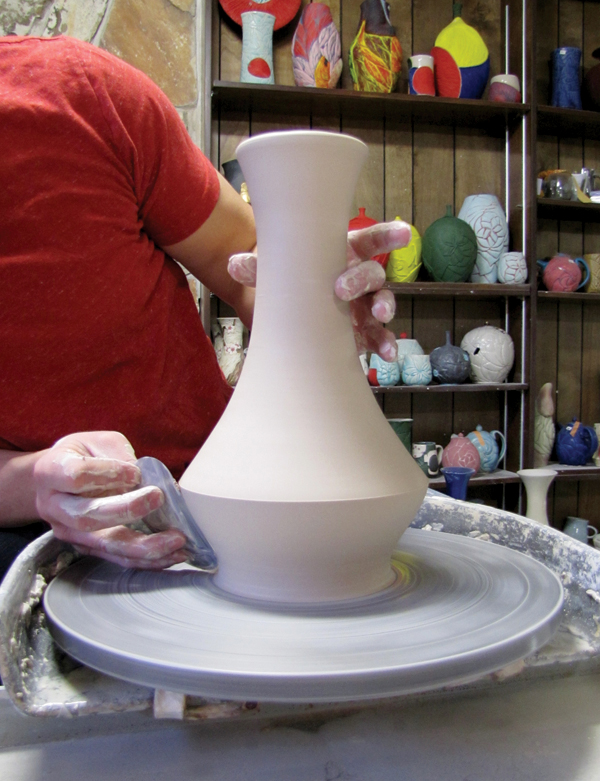 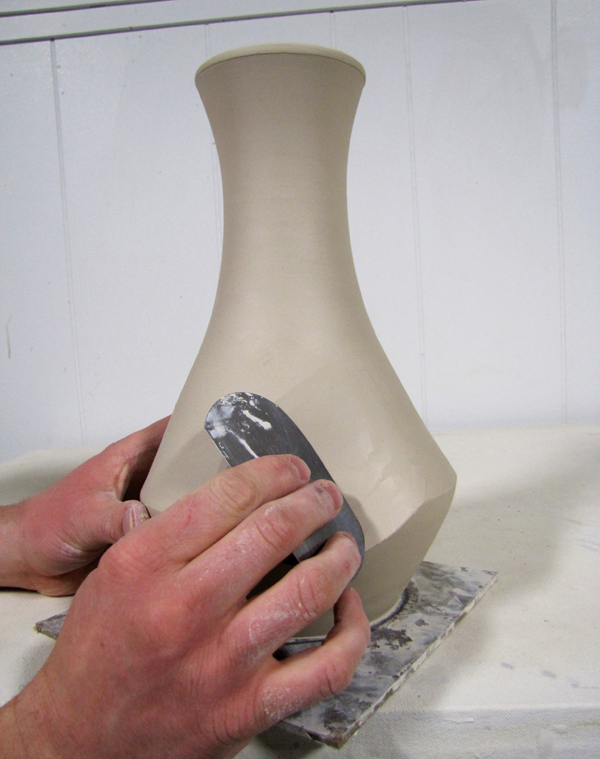 Altering and Trimming the Form

Let the piece sit until it’s no longer tacky. Then, take a metal rib to the hard edge and start to alter the form by pushing/swiping down to break the plane (4). It’s important to be cautious while doing this so you don’t alter the form to the extent that it interferes with pouring the liquid.

When the piece is ready to be trimmed, build a chuck out of scrap clay to support the uneven ridges of the altered form without distorting them (5). 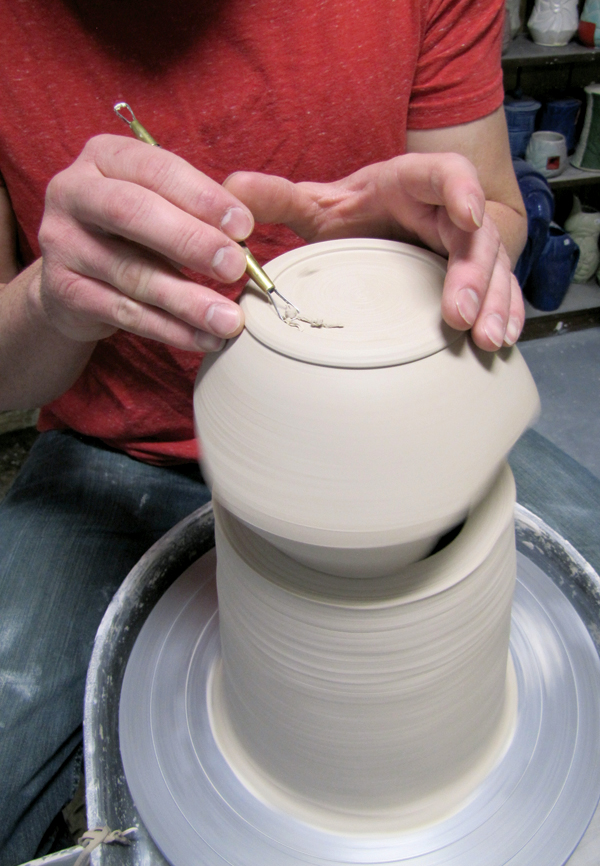 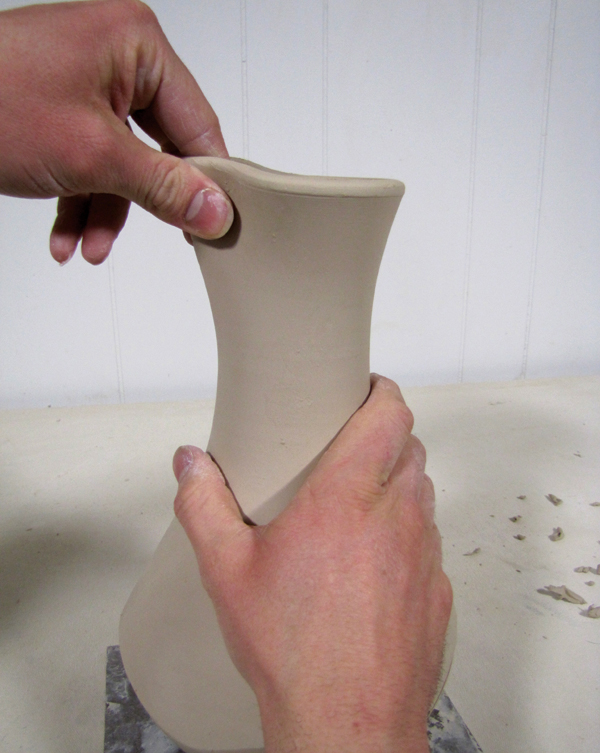 After trimming, pull the lip into a spout shape to help train the clay (6). Even though I cut the spout out, doing this helps form a path for liquid to flow. My imagery and designs come from nature, and I like the spout to look like a flower petal or a bird feather. Start by placing a piece of paper on the lip of the spout and trace a new spout that fits the form and surface design (7). Roll out a slab to the same thickness as the rim of the pot, trace around the attachment area, cut out the extra clay (8), and score and slip the new spout into place (9). 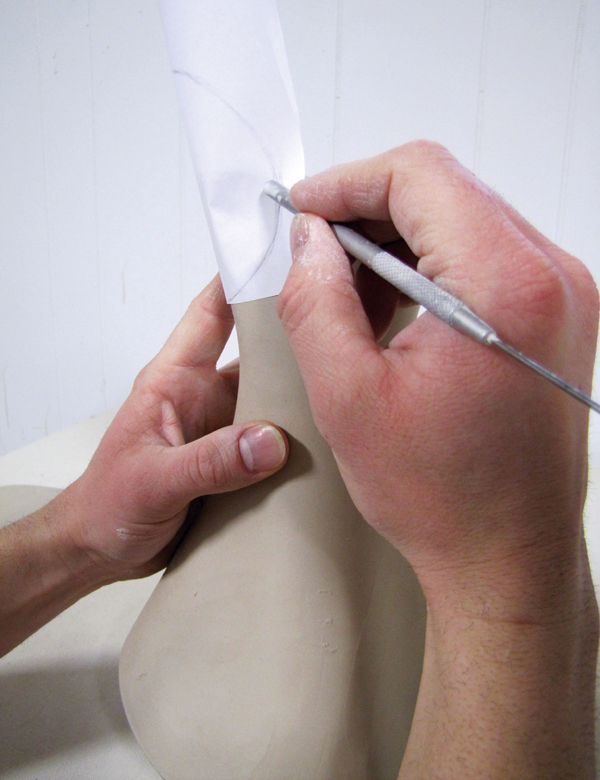 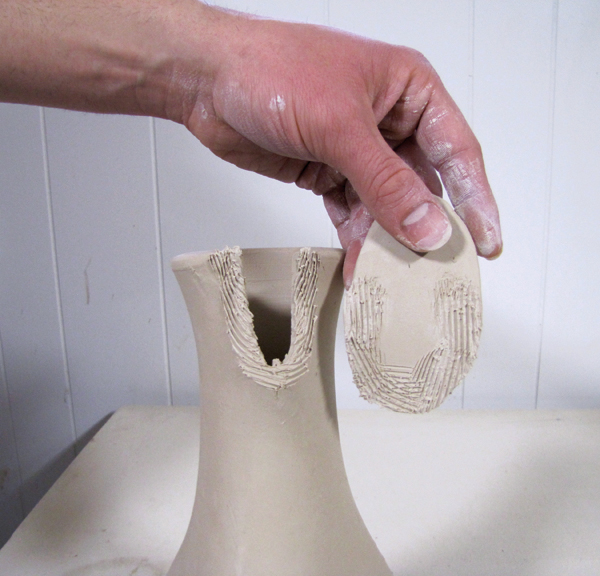 After attaching the spout, I place my hand around the neck to determine the placement of the design. I like the design to fit the form as well as fit the hand when holding the pitcher. After finding where the hand will grip the neck, decide which design will work best with the form.

Start by hand drawing the image on a blank piece of paper. Cut a clear plastic bag in half (old clay bags work well) and use a permanent marker to trace the image onto the plastic bag. I prefer to use the plastic bag because it wraps around the form easier than paper, won’t rip as easily, and I can see where I’m drawing. 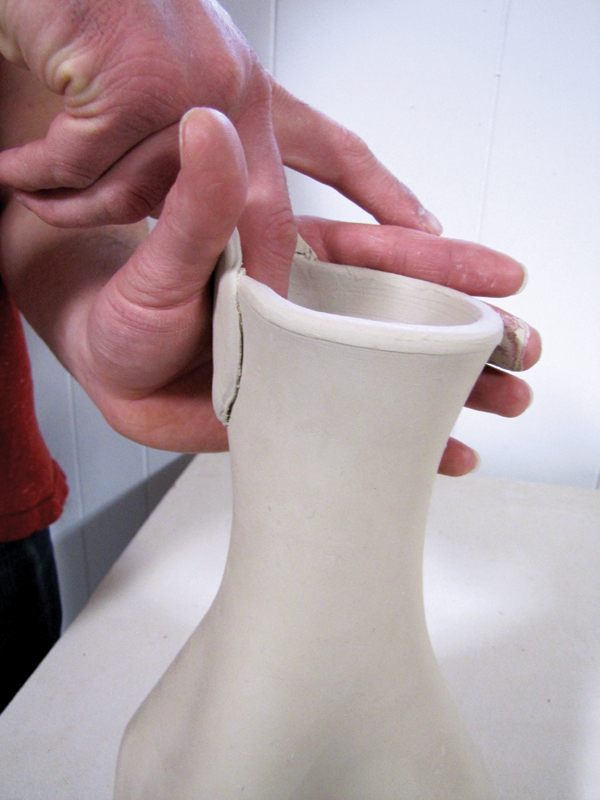 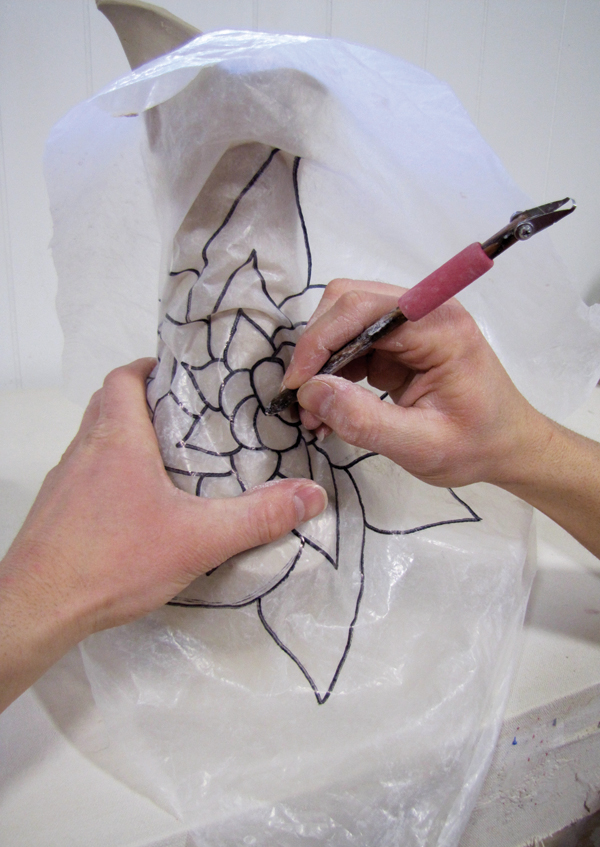 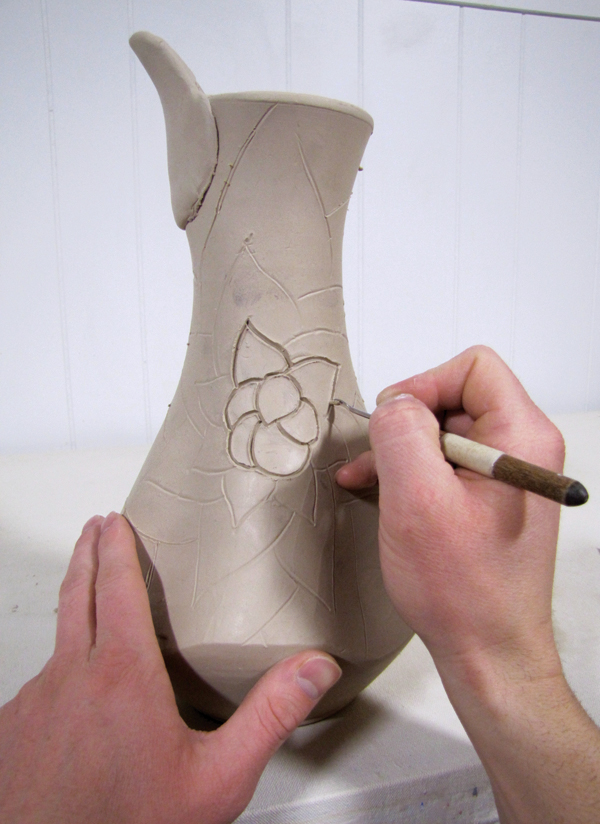 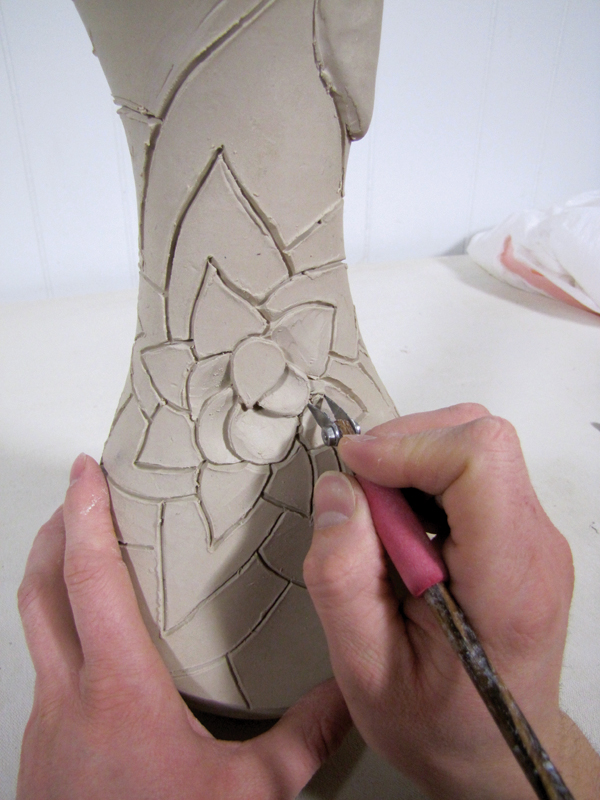 Place the design on the form and start to move the image around until it flows with the form, alterations, and spout. The image should enhance the form not distract the viewer’s eye from it. I use the back of a DiamondCore Tools’ Zebra carving tool to transfer the image onto the form (10), transferring the image onto both sides so it can be used and viewed from multiple angles. I use a Kemper carving tool with a curved, tapered, metal end to carve around the traced lines (11), starting from the middle and working my way out. I prefer to start carving when the piece is soft leather hard, that way if I mess up, I can still fix the holes, cracks, or breaks. After the lines of the image are carved, begin to carve the relief.

Sometimes the design and the form make carving tricky, so I have to get creative when I’m carving. I use the curved blade of the Kemper tool to help dig out the middle of each petal shape, but then I switch to the U-shaped Zebra carving tool to dig out more clay from the petals (12). At this step, make sure that every petal falls below the previous petal. The layers should look like they are lying on top of each other. After roughing out the image, go back through every petal to add undercuts for a dimensional feel (13). Smooth out the piece with a sponge to clean up any hard edges, then lift the tips of the petals away from the form using the Kemper tool (14).

Let the piece dry until it’s a firm leather hard before using a Zebra carving tool to add any finishing details (15). 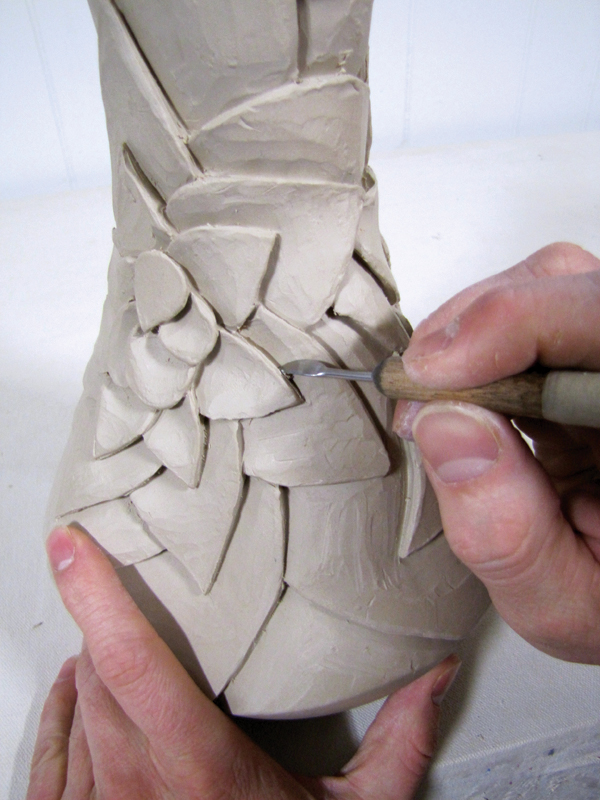 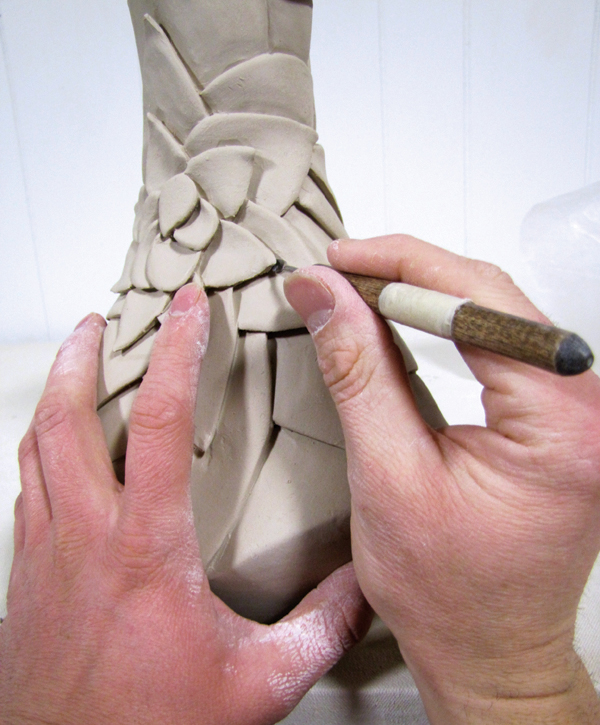 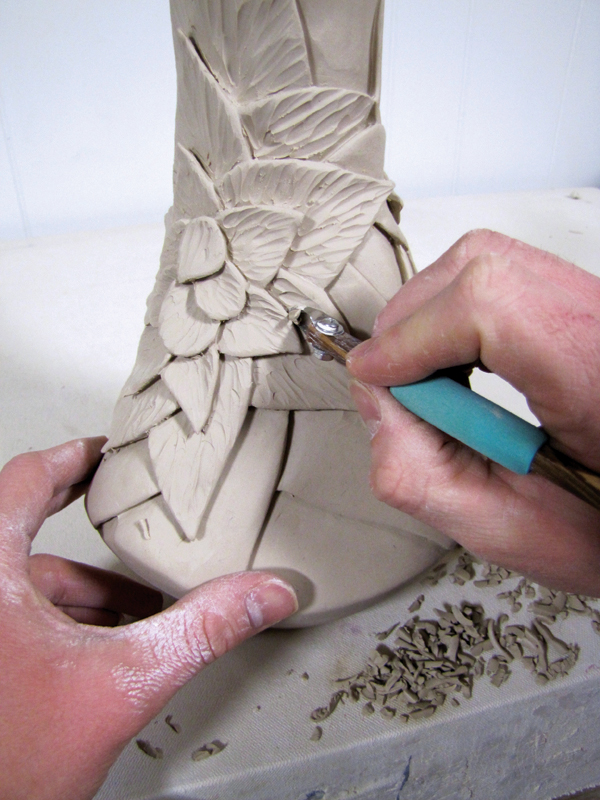 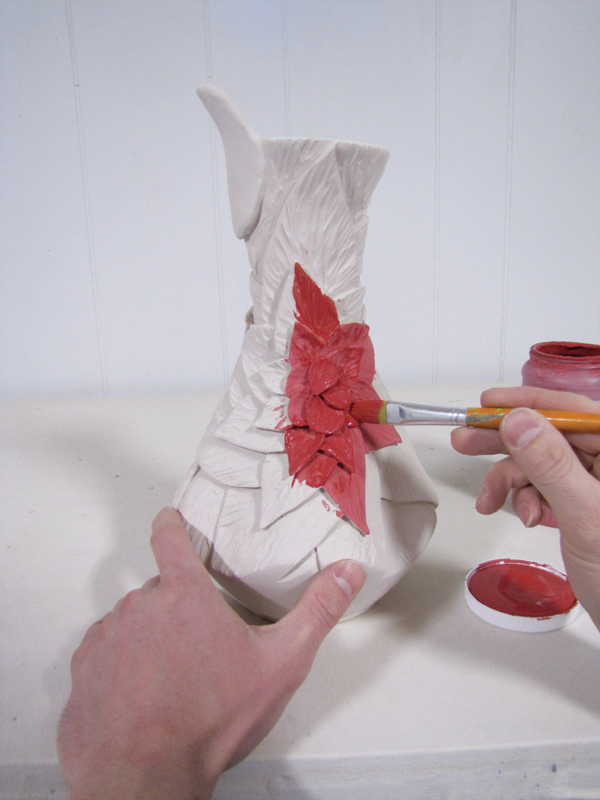 When you’re finished, go back through to clean up any clay build up. Let the piece dry slowly to promote even drying and to cut down on the possibilities of cracks. When the piece is bone dry, I apply 2–3 coats of Bright Red Amaco Velvet underglaze (16). 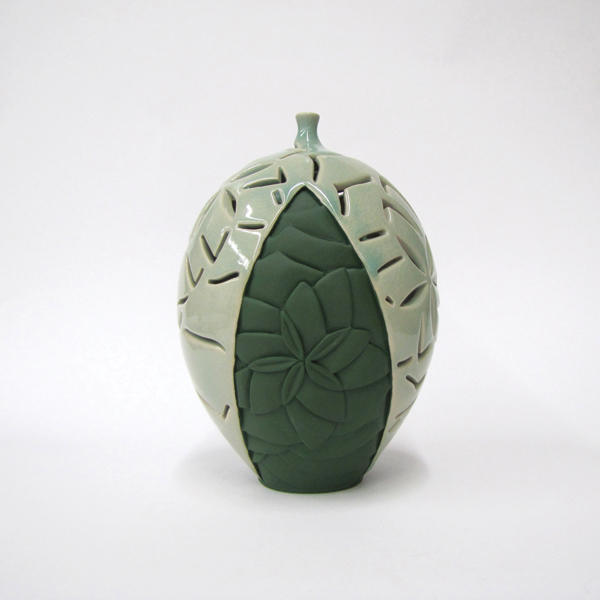 I bisque fire to cone 07, and when the piece comes out of the kiln, I wash it off to remove any extra dust.

Next, I glaze the inside with a liner glaze and do an oxidation/neutral firing to cone 9–10. 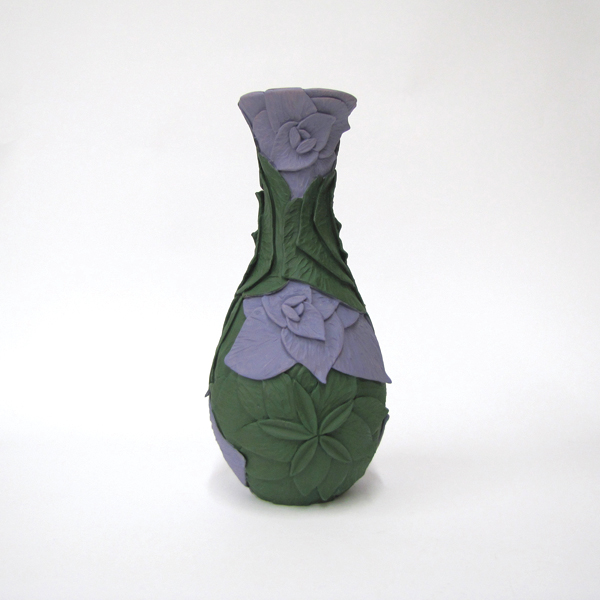 Kyle Guymon is a husband, father, potter, and educator from Bountiful, Utah. He received his BFA from Weber State University in Ogden, Utah. Since graduating, he has been refining his carving, designs, and images, which are inspired by nature, the Fibonacci sequence, and animals. His work has been shown in juried exhibitions, publications, and workshops. Learn more at www.facebook.com/kyleguymonpotteryand on Instagram @kyleguymonpottery.