Appears in the Sept/Oct 2021 issue of Pottery Making Illustrated. 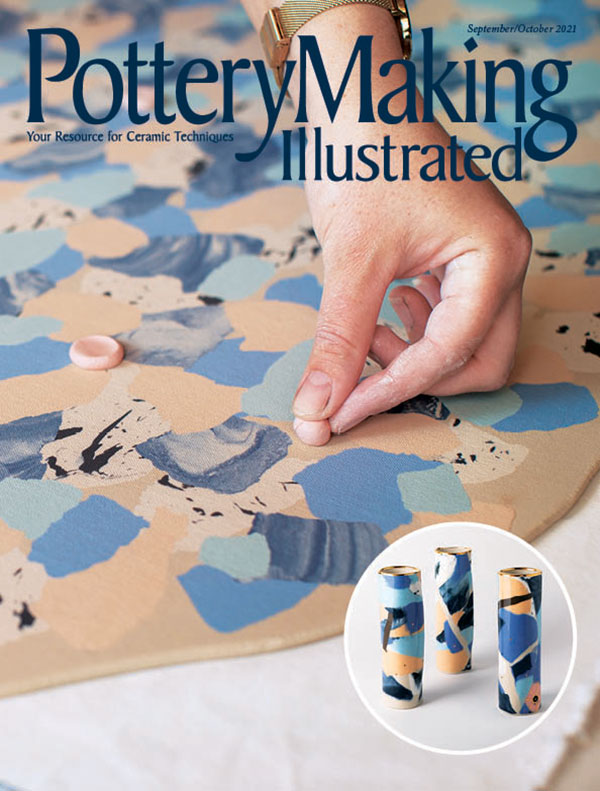 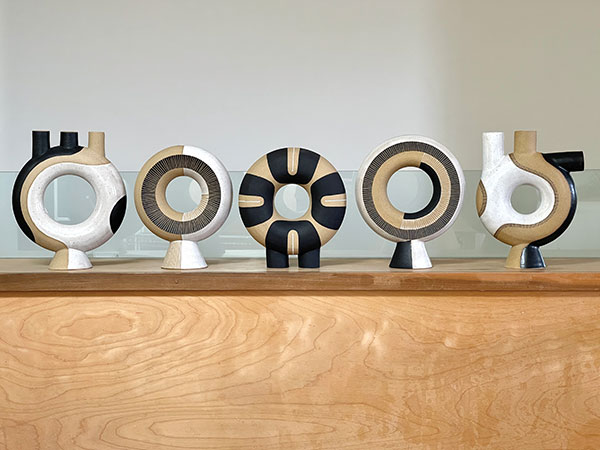 While my work thus far has been mostly functional, I have always had a love for stand-alone pieces that are meant to be on display, such as a planter, fruit bowl, or vase. I also like to challenge myself technically, which is initially why I started throwing the donut shape, or torus as it is known in mathematical terms.

From Process to Concept

I usually create my work from start to finish through a process of exploration while making decisions along the way. The concept doesn’t come first. This is also true of decorating and glazing; I make sure the shape is supported by the surface design. The donut-shaped pieces that I make now developed this same way.

In my early days making ceramics, I had always wanted to make a chip-and-dip bowl—a larger bowl in which a smaller bowl is attached in the center, thrown in one piece. Back then, I tried many times and never succeeded in making a decent one. A few years later, I thought I’d expand my skills by learning to throw the torus shape, which is similar in my mind to the chip-and-dip bowl, but taking it further because the rims of each bowl must be joined, forming a hollow ring. I succeeded in throwing an acceptable torus, then added a foot so that it could stand. But now that I was able to create this shape, the question was what to do with it? Lacking a strong idea of how to proceed, the handful of toruses I made, although bisque fired, were shelved and somewhat forgotten.

In 2020, my desire to make more artistic pieces became stronger, and during the pandemic shutdown, I took the time to revisit the torus. I looked at my bisque-fired torus vases and suddenly the shape made sense to me—all in the context of what I had been experiencing during the shutdown. The hole represented an emptiness, an unknown, a divide, an incompleteness, like something that was lost, like an attack on our wholeness—all the things that COVID-19 forced upon us. But I could also see the healing part, thus the working title Make Whole came to mind and the concept started to take root. 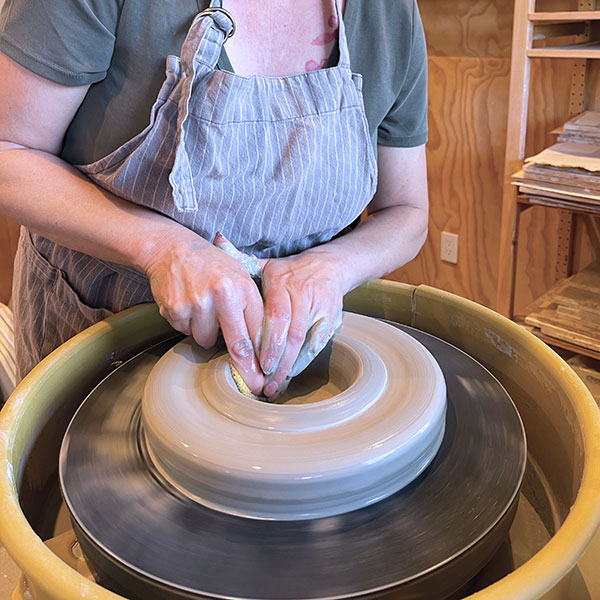 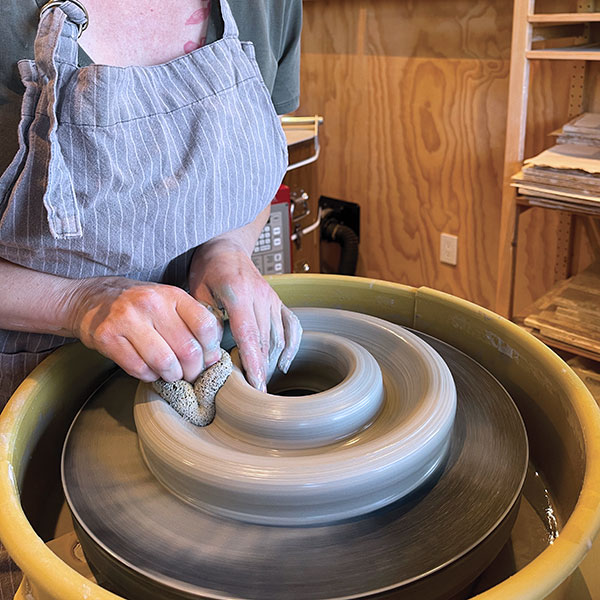 The process begins with making a literal hole inside a perfectly centered mound of clay. The mound of clay gets split apart in the throwing process, and with a little coaching it finds its way back together. The healing effect clay has when you are working with it mirrors this sequence. If the hole represents everything mentioned above, the clay surrounds the hole, adapting to and also accepting the hole as an integral part of the piece.

The torus shape has an infinite number of possibilities for variation. There’s room to play with the sizes of the center holes and the bands, the number and angle of footings and extensions, and of course the choice in decorative techniques. I recently started altering the shape of the torus itself by flattening some parts and concaving other parts of the surface. To me, the final torus piece is all about seeking balance. It is similar to our human process in finding our own balance, our new normal in these extraordinary circumstances.

To make the donut shape, start by centering the clay low after coning it up and down, and pushing the clay flat. Use 5½–6½ pounds (2500–3000 grams) of clay to start with for a piece that’s the size of the one demonstrated here. Next, open up the center all the way down to the bat (1). Make the hole wider by pushing down on the band of clay and simultaneously pulling it toward your body, in sync with the speed of the wheel.

The next step is opening up the center of the band to split the clay in half, stopping about ⅓ inch from the bat (2). This creates two thick walls that will be pulled up separately from each other. Start by pulling up the center wall first because it gets hard to reach once the outer wall is taller. While pulling, imagine how the two parts will join in a curve, and start shaping them a bit (3). 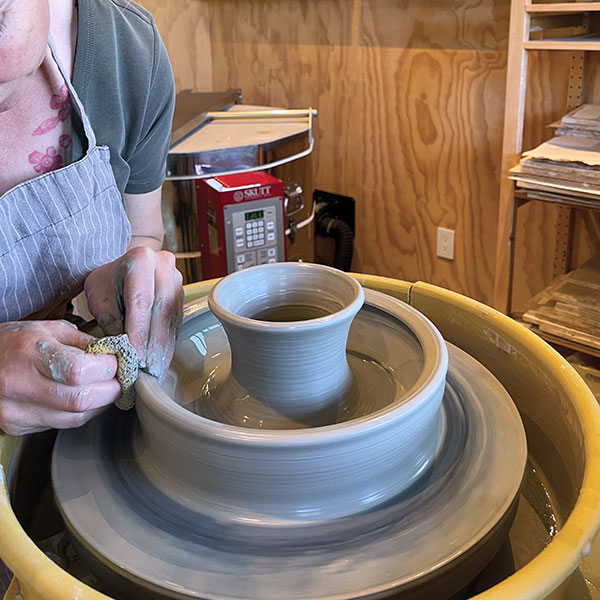 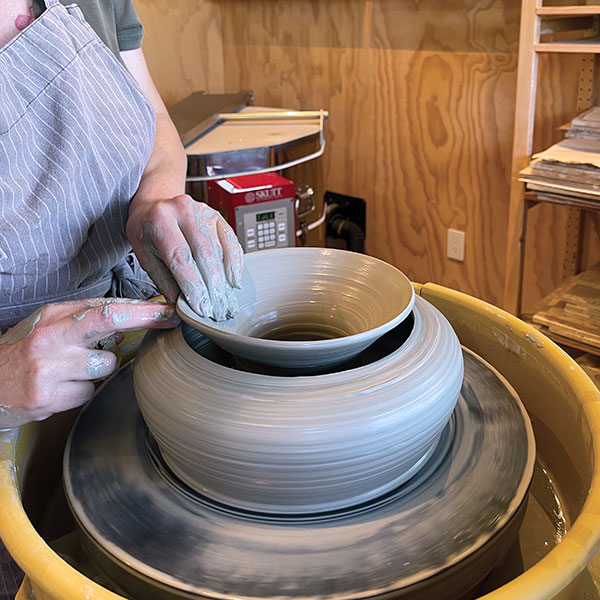 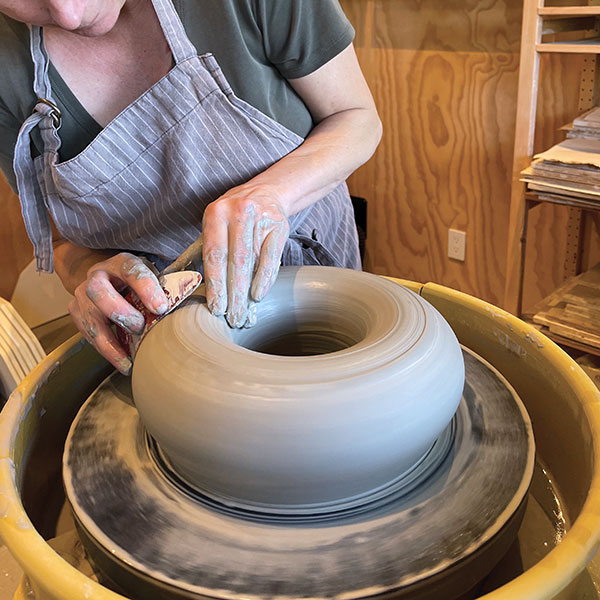 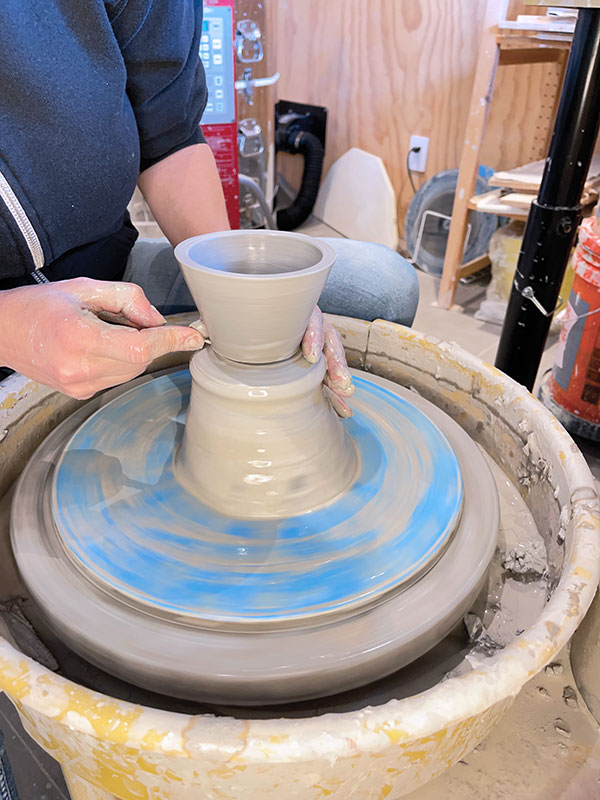 When the two walls are pulled up, it’s time to remove the water from the inside. Then, push the walls gently toward each other until they meet (4). Once they latch on to each other and create an air pocket, the form will have enough tension for you to shape it some more using ribs (5).

When satisfied with the shape, smooth the surface with a soft rib. I usually leave the torus on the bat and cut it loose with a wire before putting it on the drying rack.

Next, throw additional items like a foot ring and spouts off the hump, should you want those added (6). I often throw more parts than I think I need, just to have some options when assembling.

After it has reached the leather-hard stage, remove the torus from the bat and place it bottom-side up, centered on your wheel for trimming. Trim the bottom so that it is round (7). Pierce a tiny hole in the widest part on the outside of the torus to let air out and to prevent it from cracking when fired. If you are planning to add any colored slip or underglaze, this is also the time to do that. 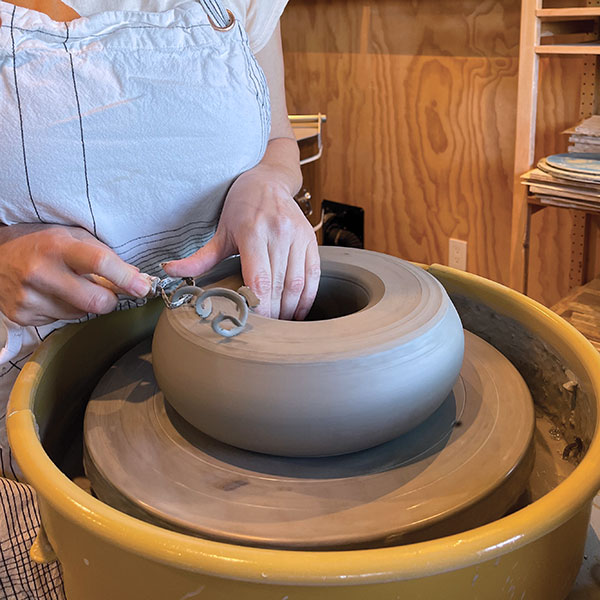 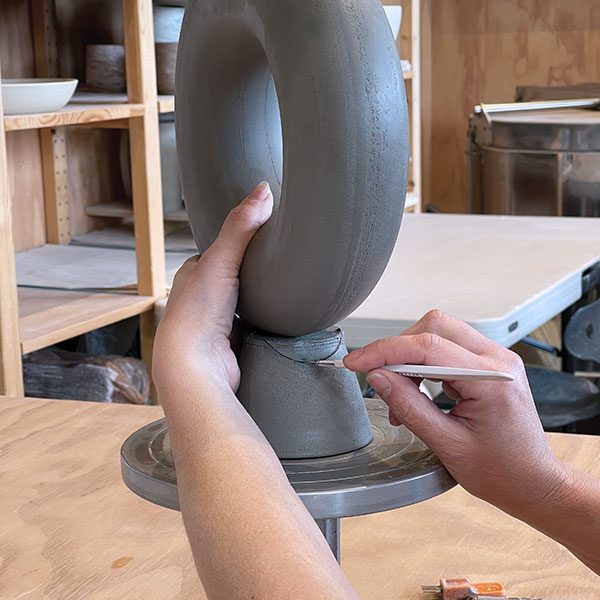 After trimming, determine the rest of the shape. Before attaching a foot, it’s important to choose between two options for the overall form: a closed shape or a functional, vase-type shape. For a closed form, I attach the foot around the tiny air hole, so the hole will only be visible inside the foot. For a functional piece, the tiny hole is incorporated into a larger hole at the top of the form to accept stems or branches. The foot will be attached opposite from the hole.

Add feet and spouts as needed by slipping and scoring the surfaces and joining them together (8–11). This is also the time to add surface design, if you choose to do so. I like to use the sgraffito technique. Sgraffito designs can be carved through either a layer of colored slip or underglaze (12). Next, after cleaning up the surface, the piece needs to fully dry before bisque firing. 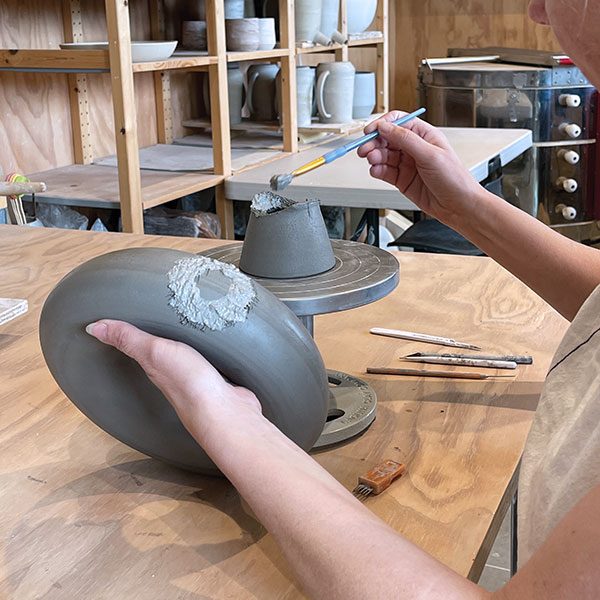 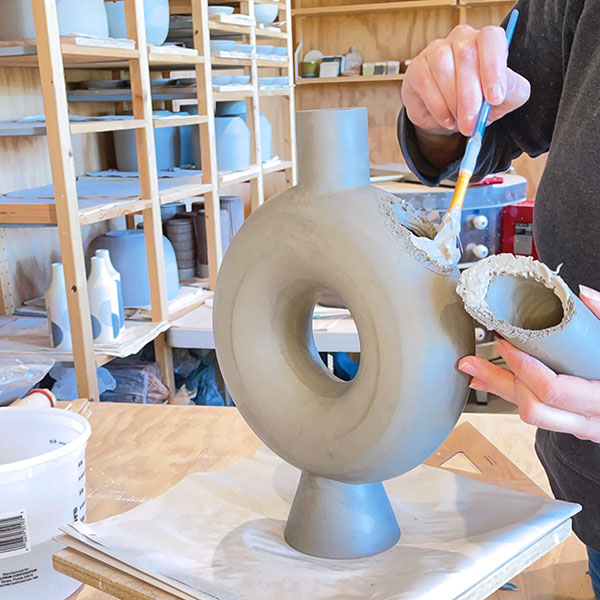 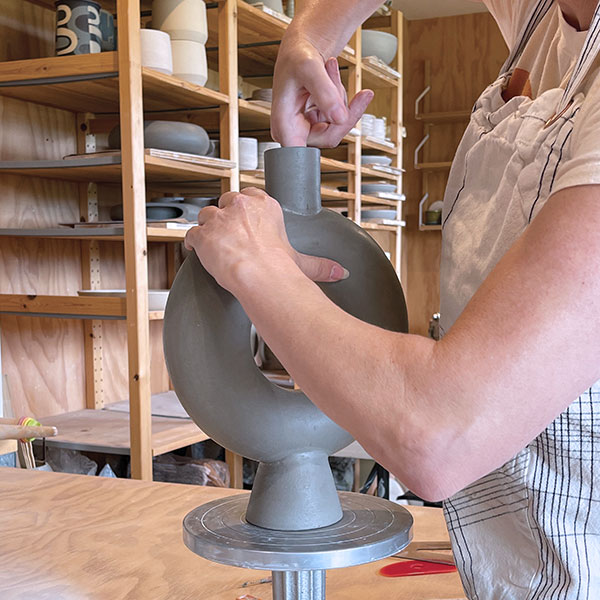 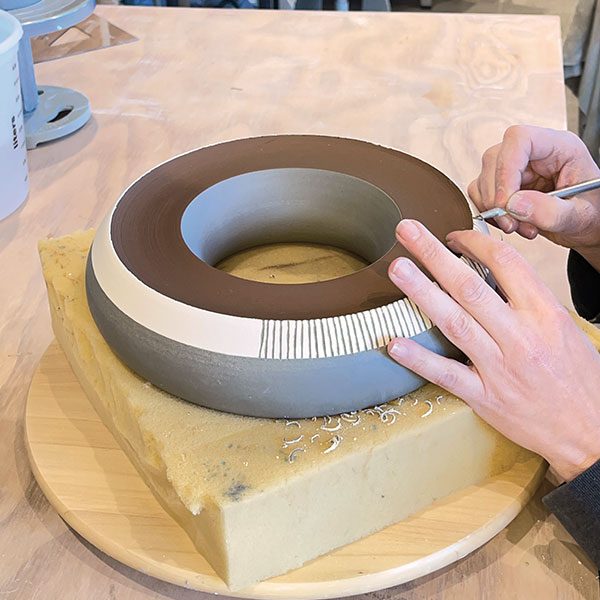 Through glazing, I really got a grip on this shape and made it my own. I decorate using different techniques, like sgraffito and slip trailing, then determine the parts of the shape that I want to glaze and define those using wax resist.

I start by sketching in pencil on the bisque-fired pieces until I find a balance I like. A wet sponge easily removes unwanted lines (13). Committing to a glaze design could take multiple sessions with the piece. I usually don’t have a set idea of how it should look in advance, but I let the piece speak to me and guide me along. 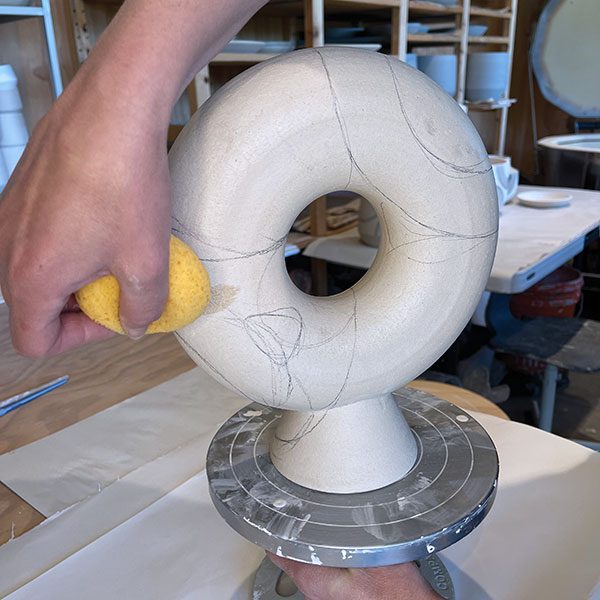 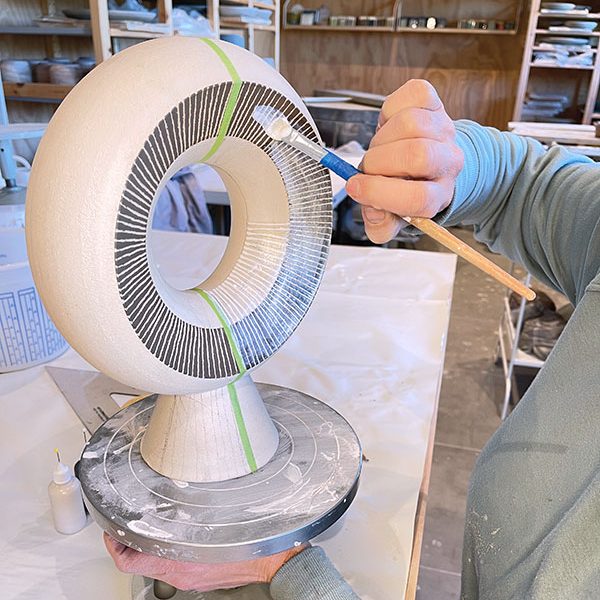 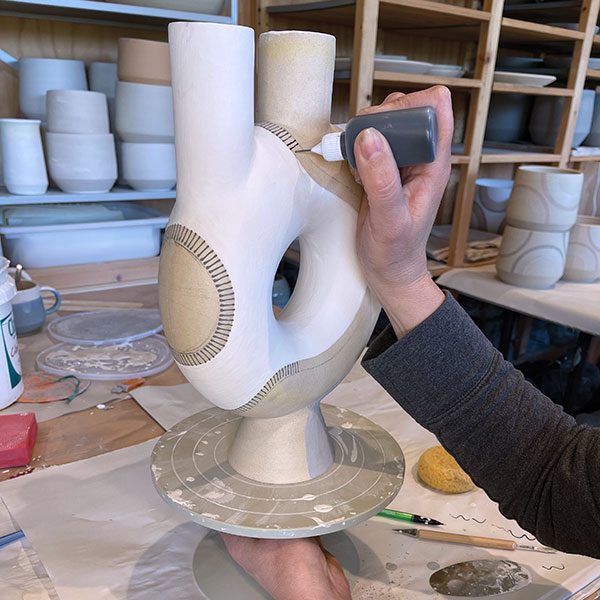 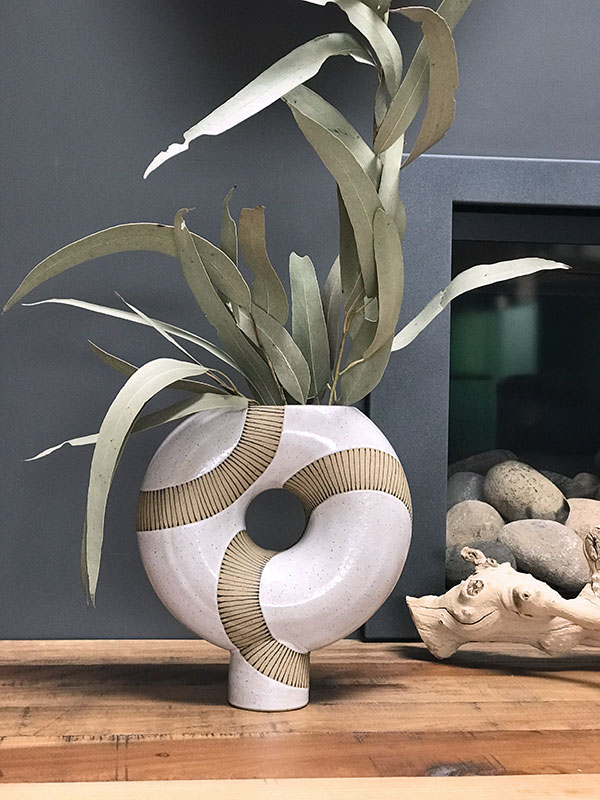 Glazing these shapes is not like glazing regular pots since there is technically no inside and outside. The true inside is typically invisible and/or unglazed in closed forms. And the outside merges from the front—through the hole—to the back of the piece. The three-dimensional aspect of the torus can’t be treated like the more singular surface of a vase or cylinder. The hole offers an entrance to the continuous shape. I try to complete each piece by examining the amount of surface that is glazed and/or decorated, and the parts that are left bare (14–16). The relationship and the proportion of these should create a harmonious balance and be pleasing to the eye, from every angle.

Overall, the torus is an interesting shape to explore for both functional as decorative, sculptural, and conceptual pieces, and the possibilities I see keep me engaged. I hope sharing my process thus far has sparked an interest in some of you and I wish you lots of fun exploring the torus.

Judith Lemmens makes functional and sculptural vessels in Mill Valley, California, for her brand Julems. After a career in interior design, she switched to graphic design and illustration, then found her way to working with clay. To learn more, visit www.julems.com.