Appears in the Nov/Dec 2015 issue of Pottery Making Illustrated. 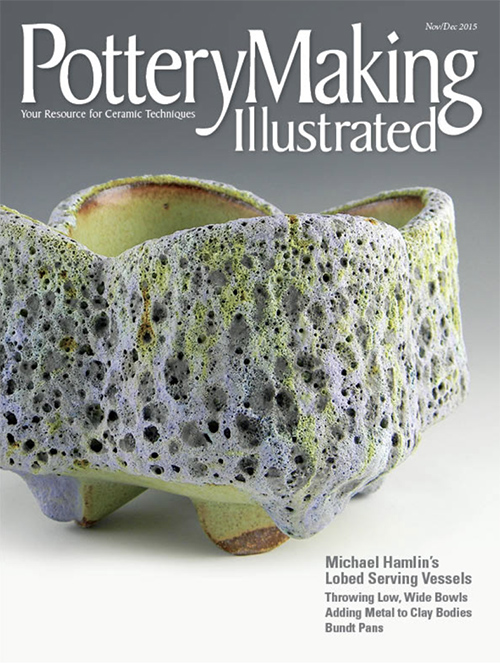 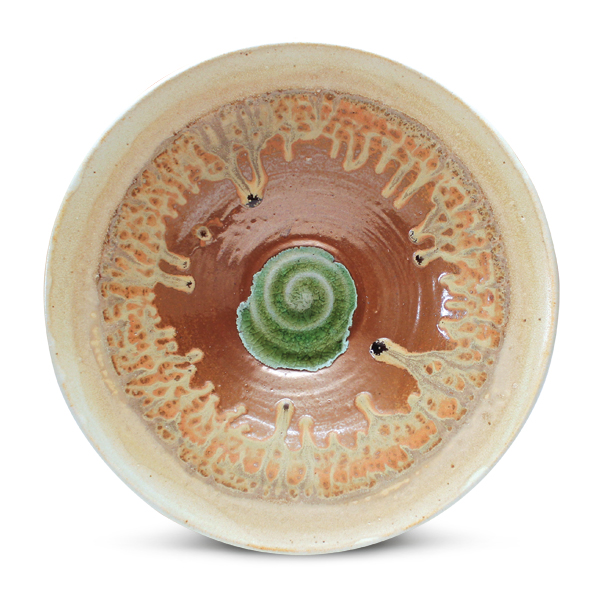 This elegant form utilizes a brilliantly simple technique that I picked up during my years as a journeyman potter in Seagrove, North Carolina. The process uses a simple dowel or stick to lay out a bowl to seemingly impossible diameters without the worry or dread of it collapsing —as long as you stay within reasonable diameter, weight, and thickness ratios for the scale of the bowl you want to make.

The key here is not to wait to lay your wall out to the final width on your last pull. The wall of your bowl should be at or around a 45° angle by the time you have finished all your pulling and cleaning with a rib. Then it’s easy to use a wooden dowel to lay it out the rest of the way.

The beauty of this technique is that you use the stick to push against the natural state and shape of the 45°-angled wall of the bowl. The clay’s memory and its resistance to this laying out process prohibits the walls both from falling any further than you push them and from ultimately collapsing. So therein lies both the challenge and the fun; once you get comfortable with this technique you can push the limits with larger amounts of clay and even longer sticks to see how far you can lay it out.

About 2–3 pounds of clay would be an ideal starting point for this bowl, however for this demo I’m using 4 pounds. Center it pretty low and wide into the shape of a fat, 3×7-inch hockey puck.

Open the bottom to about 3 or 4 inches in diameter and leave an optional low-relief swirl in the middle. A later addition of a piece of green bottle glass placed on top of this swirl before the final firing makes a nice melted glass accent (1).

While keeping the walls and the rim thick, I usually do no more than four pulls to create the initial shape (2). It’s better to leave them slightly too thick than too thin as you can always trim off the excess clay. If the walls are too thin, they won’t support a low, wide, cantilevered bowl shape. After the last pull I clean and compress the walls using a wooden rib (3). Then I do another pull with the rib, this time angling the wall to about 45° to prepare for the laying out (4 and 5). This is a cross section of the bowl at the point where I start laying out the bowl using the dowel. Notice the thickness of the walls (about ¼ inch) and the amount of clay left in the bottom foot area. This thick clay foot acts as extra support for the wall after the laying out process and can be trimmed away later (6). 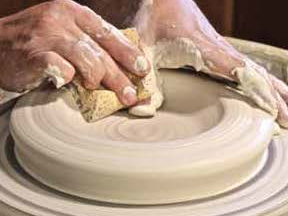 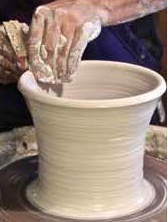 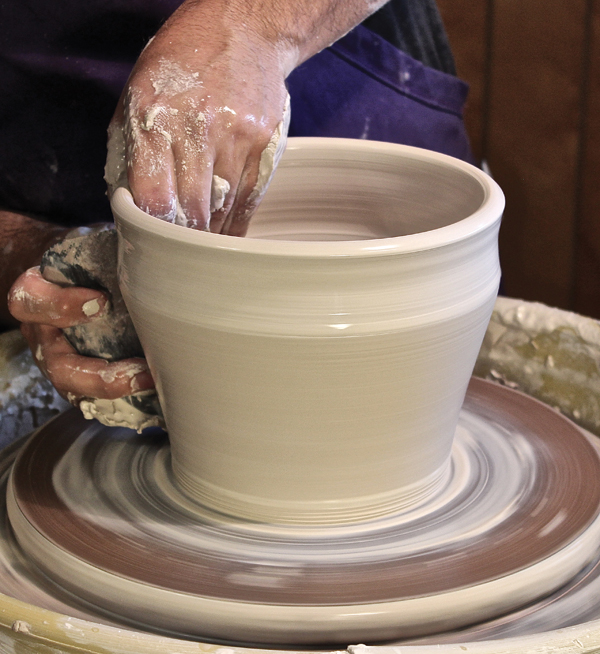 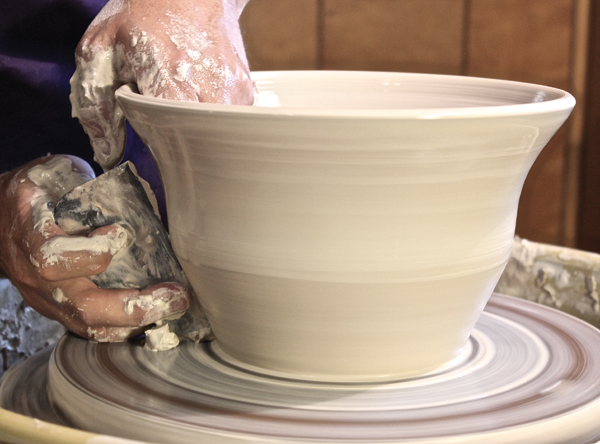 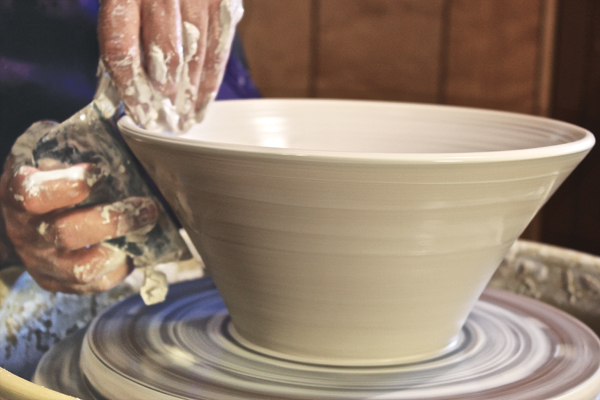 After cleaning the water out of the bottom I go back and saturate the sponge and give the inside and outside of the wall a good (but not too heavy) sheen of water; just enough to keep the stick and my hands from dragging. I’m using a 5⁄8-inch wooden dowel that’s sanded on one end to a rounded tip so it won’t leave any marks or cuts inside the pot. Lightly placing the tip of the stick inside the bowl at the point where the wall begins, I hold the dowel in my right hand in an overhand grip while carefully situating my left hand underneath the wall for support (7). While you’re getting accustomed to this process, it isn’t always necessary to use your left hand for under-wall support, it’s just something I’ve gotten used to doing. It’s entirely possible to do the laying out with just one or both hands holding the stick steady as long as you press down very slow and carefully. Just pivot down with the stick while keeping the tip stationary (8). 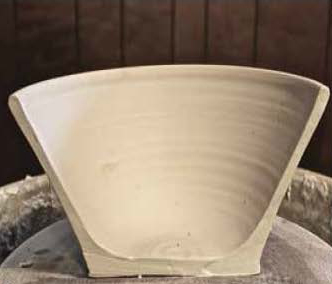 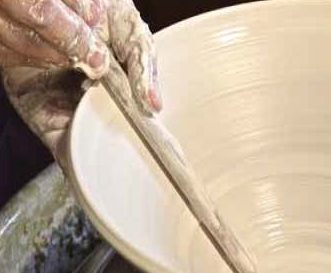 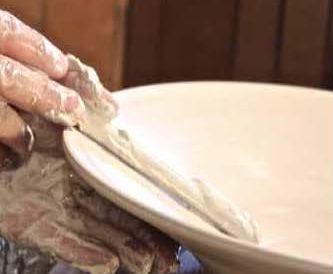 I tend to stop laying the bowl out once the rim reaches about two inches above the surface of the wheel head or bat (9). Because of the wall’s thickness and lack of curvature, it’s fortunately difficult to flop it from this point on. However, if the bowl developed a split in the rim during the throwing process, it may weaken and form a tear in the wall, which is why you should attempt to keep the rim as thick as possible during throwing as it will naturally thin out during the laying out process. Something to keep in mind is that the walls will lift during drying, however that also provides an opportunity to put the bowl back on the wheel and push the walls further down. You will find this time around it’s much easier and safer as the clay has stiffened. 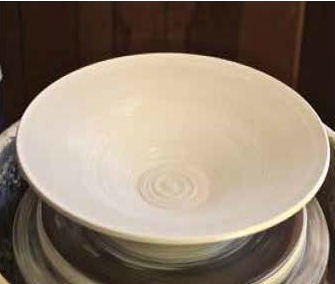 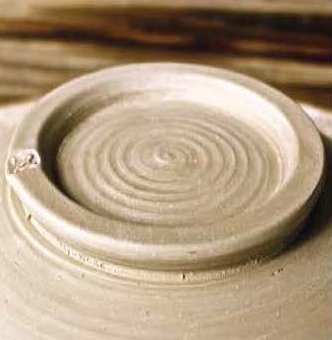 Once the bowl is leather hard I like to trim a sharp-angled foot ring on the bottom (10). This angled foot allows for a medium-gauge, bendable wire to be wrapped around it for wall hanging, as these platters double as beautiful wall art. So there you have it. Be brave, and don’t be afraid to try larger amounts of clay as this technique is very versatile. 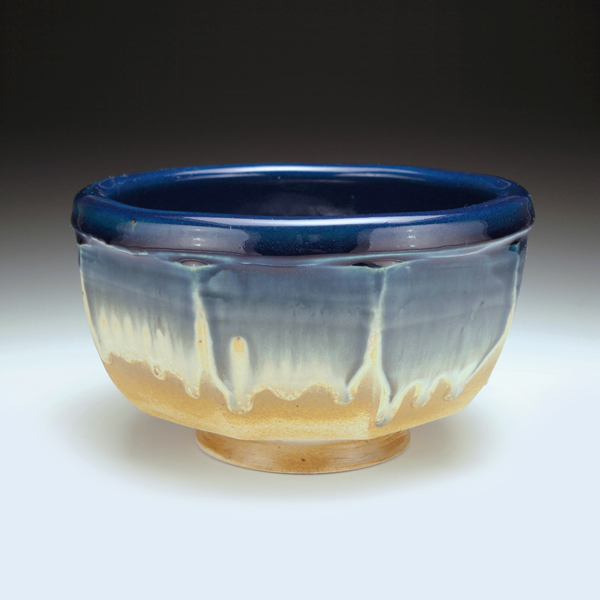 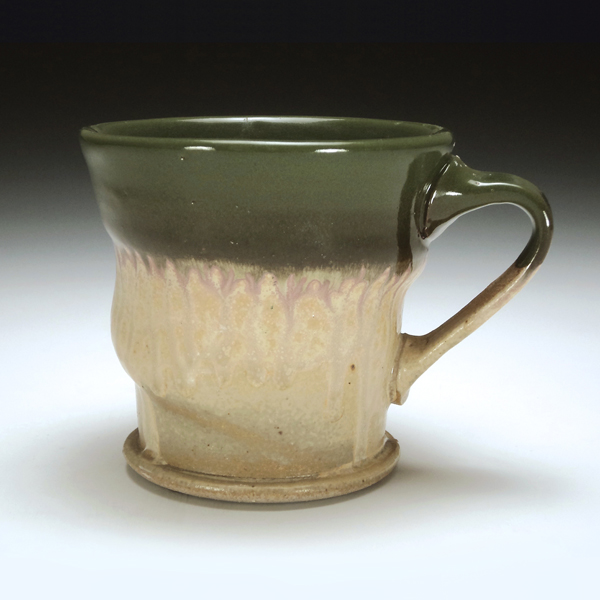 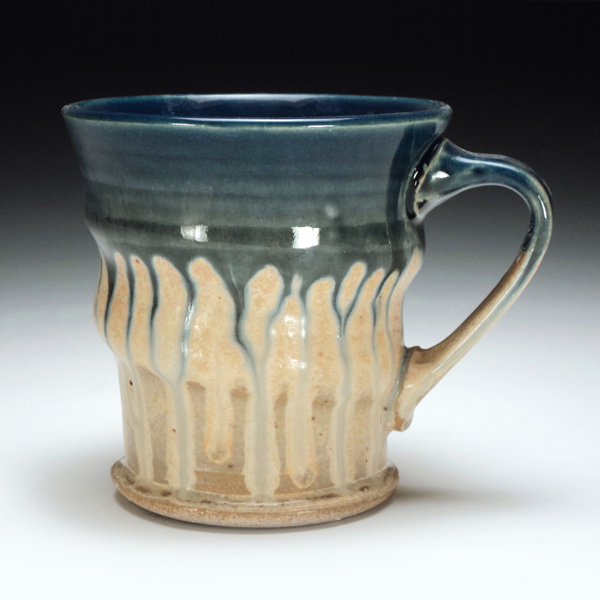 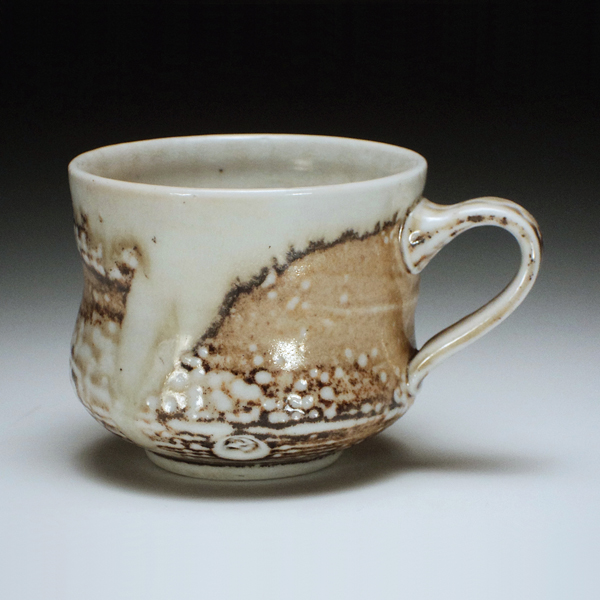 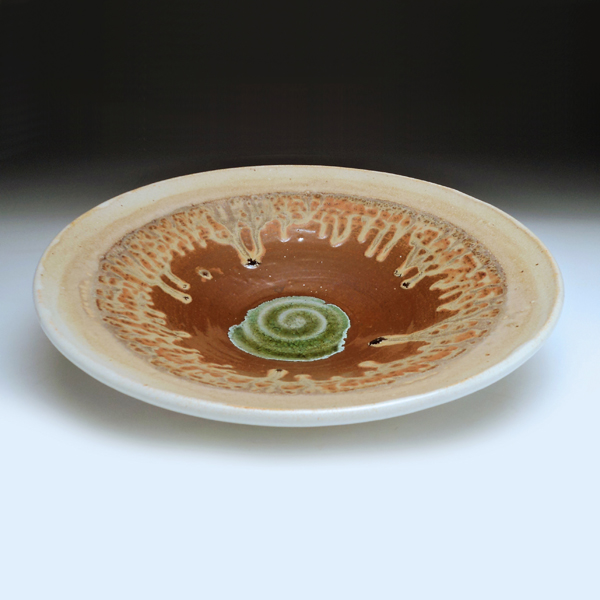 Jared Zehmer received a BFA in ceramics from Virginia Commonwealth University in Richmond, Virginia, and now lives and works in Seagrove, North Carolina. In addition to making his own functional pots, he also works for various potteries in the area. Follow Zehmer on Instagram: @jaredzehmer or view work on Etsy: www.etsy.com/shop/zehmerpottery.