In the Studio: One Per Day Angel Brame

Appears in the Jul/Aug 2018 issue of Pottery Making Illustrated. 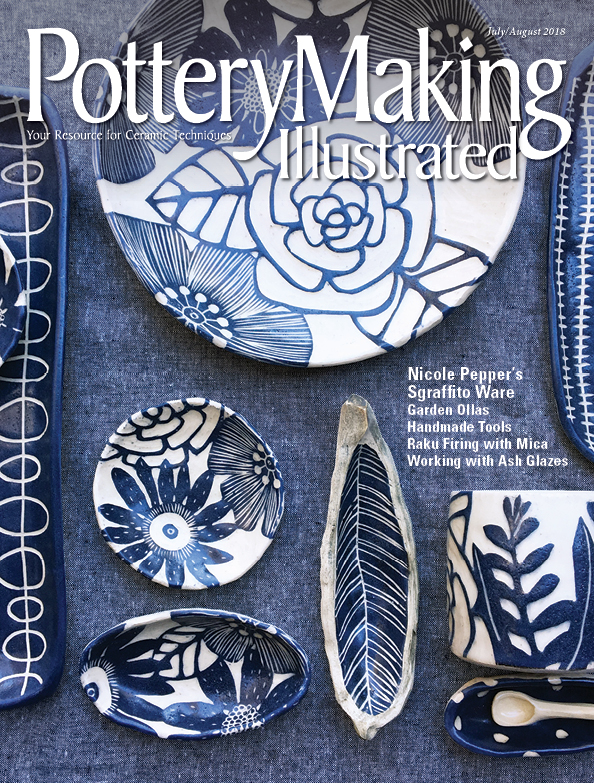 As an artist, there is always that hunt for the next project, challenge, discovery, or grand idea. In 2016, I found myself searching. Having completed a solo exhibit and a large piece for an exhibition at the annual National Council on Education for the Ceramic Arts (NCECA) conference, I began to consider what I could do next to push myself with clay. Functional, production pottery is my bread and butter, but I needed an exciting challenge.

I stumbled across a fellow potter, Rebecca Ziemer, who was working on a project to make one small clay piece every day, for one year. She was creating an animal or critter full of personality, attitude, and life every single day. It was intriguing to watch her journey as the days passed and witness what she was learning along the way.

While not wanting to copy her project completely, I considered a variation on her challenge. I had decided to create a teapot every day in 2017. After careful thought, I knew I needed additional parameters or I would quickly suffer boredom or burnout. I settled upon each piece being able to pour and take up less than six cubic inches. Each piece would be made using a combination of wheel-throwing and handbuilding techniques.

I began the process on December 31, 2016 by filling one damp box with blank pieces, or, body parts, as I sarcastically referred to them, and a second damp box with spouts. I purchased a sketch book to document my progress and a chalkboard to quickly work out shapes and details. Knowing that this project was going to be lengthy, I knew being organized was crucial. I set up a backdrop and lighting along with my studio camera to have a daily digital diary as well. I gathered rubber stamps to number each piece as soon as it was built. 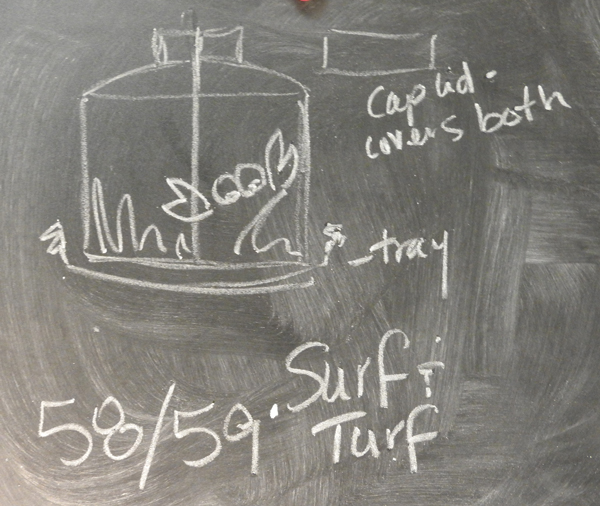 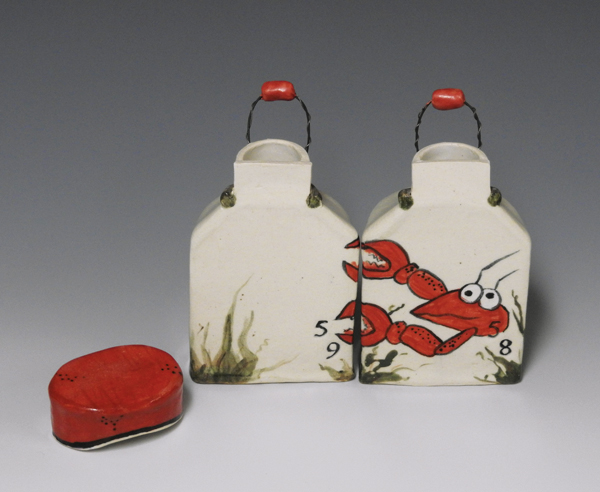 The first month’s pieces were a series made by putting together the body parts from the damp boxes into various pourable items. This exploration was critical. It forced me to make things I had not attempted before or had not done in that small a scale: watering cans, oil cans, gas cans, and the obvious, teapots. I also began to pay attention to my surroundings differently. What did I use or see on a regular basis that poured and could be translated into a clay vessel? The possibilities quickly began to open up.

The first month was also a starting point for figuring out how organized I was going to have to  remain for an entire year to keep track of my progress with the project. Each piece had a sketch in the book, a sketch on the chalkboard (1, 3), and an image taken at the greenware and fired staged (2), plus an image of the chalkboard sketch. Complete information—regarding firing method, glaze combinations, dimensions, and additional notes—was recorded by each sketch. Starting the process fully organized helped me further down the road with proposal information and setting up a separate Facebook page dedicated to this project. Any future exhibits would need detailed inventory lists as well. 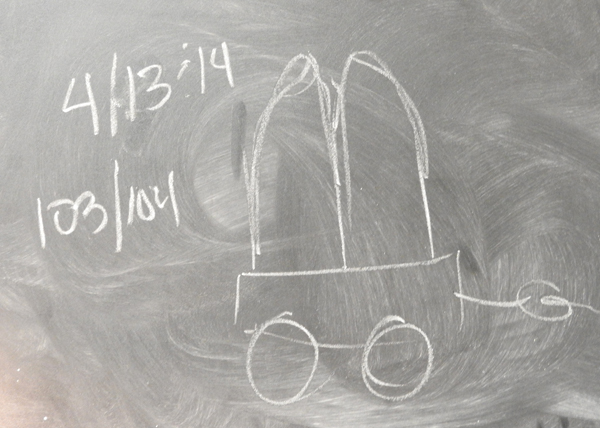 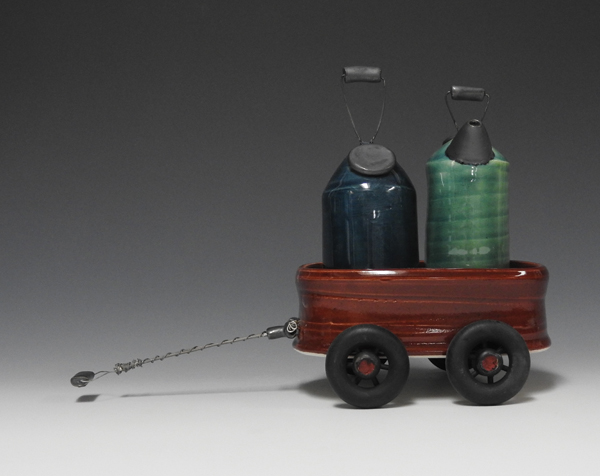 The bits and pieces I discovered in January allowed me to progress and learn exponentially. By forcing myself to set aside time every day, I learned how to create quickly. A heat gun was my new best friend. There were days of having a complete plan in place and days of letting the clay lead the way. If I wanted a long spout on an oil can, I had to figure out how to do it. If I wanted the lid to be on a hinge, I had to figure that out, too. The more I learned, the more I wanted to learn. This project became an opportunity to try anything and everything.

As completed pieces cycled out of firings, it was time to write exhibit proposals and find appropriate venues for submission. This was another learning opportunity for me, never having written anything of that magnitude. I gathered images and details of completed pieces, created a document with my vision for a project that wouldn’t be completed for months, and collected a list of appropriate galleries. I dusted off my curriculum vitae and wrote an artist statement specific to the project. As an artist, I love creating. My time is best spent in front of my wheel and elbow deep in clay. By deciding to create 365 pieces, I was also inadvertently deciding to show them. I have never been a fan of self-promotion, but it was going to be a necessity in this case. Proposals sent started a waiting game for letters of acceptance (5) and rejection.

Throughout the course of the year, I chose to do a few themes and series of shapes. February’s theme was “And,” which incorporated an automatic “and” in the title. For example, two poison bottles were titled, Romeo and Juliet. March explored specific shapes: simple cylinders, hollow balls, and altered pitchers, taking at least a week’s worth of pieces per exploration. In June, I worked on expanding upon the piece from the day before, and this lasted well into August. October took on a spooky theme while December was full of classic toys.

Regardless of the day or month, each piece filled me with a sense of accomplishment. Some days were easier than others. Some days, I walked away from the piece with minimal enthusiasm. Yes, the piece was done, but no, I was not excited about it. Some days, the excitement was uncontainable. Some pieces were created almost effortlessly and some drove me crazy. I became rather good at problem solving from a spatial perspective and from a finishing perspective. How do I translate the two-dimensional sketch into a three-dimensional form, and is it best constructed from wheel-thrown shapes or slabs or both? How do I get clay to look like wood or metal? What is the best way to adhere additional details to pieces after glaze firing? My year was a long series of small decisions with a big impact.

In December, a fellow potter asked me what I had learned from this project. I was not prepared for that question. The long answer is that I learned a tremendous amount. Long spouts can be made with bamboo skewers and lugs of clay. There is no handle too small to pull properly. Anything can be made to pour with the proper spout, including a snow globe. There is no reason why teapots can’t have wheels, wings, or legs. They can also hang and resemble blimps or hot air balloons. I learned how to saggar fire and use gold luster. I learned how to manage my time on a scale much grander than just getting enough inventory for the next show.

As this was my project, I followed my own rules. It was perfectly acceptable to steal the wheels off of my son’s Hot Wheels cars for the pull-toy teapot (4). If I wasn’t happy with a piece after a glaze firing, I ran it through as many times as it took to get the results I wanted.

I also learned that planning and organization won’t stop accidents from happening, kilns from misfiring, glazes from running, and frustration to set in. In the beginning, pieces that failed—like spouts closing up with glaze or lids sticking—were a great source of stress. Over time, I realized that both the failures and the successes were valuable learning experiences. Each piece was still created as part of a huge challenge and ending up with 365 pieces that were 100% successful was an unrealistic expectation. It is, after all, clay.

The short answer to her question was simple: I learned how to get out of my own way. I had no way of knowing that taking on the outrageous challenge of making 365 pots in 365 days would turn in to fearless discovery. I learned not to let my lack of skill stop me from making something happen. I had a wealth of knowledge at my fingertips, fellow potters all around me with unlimited encouragement, years of my own education and experience, and a stubborn determination to see the whole thing through. If it didn’t work the first time, I tried again. Just because I hadn’t done it before, didn’t mean I was incapable. The piece made on January 1st is nothing like the one made on December 31st, and wasn’t that the point?

Angel Brame has a BA from Missouri Southern State University and has been working in clay for 13 years. She exhibits in multiple galleries across the state as well as online. To see more visit www.dragonfliesandmudpottery.com orwww.etsy.com/shop/dragonfliesandmud.