In the Studio: Discovery and Control Donna Flanery

Appears in the Mar/Apr 2018 issue of Pottery Making Illustrated. 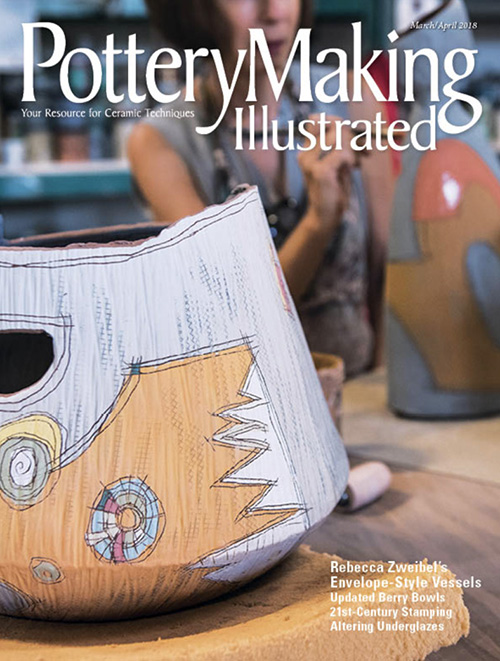 There is more than one way to approach drawing and painting on clay. You can think about it in terms of imposing and relinquishing control. In one approach, the artist intuitively responds to the surface of the pot and draws or paints directly on the pot without sketching first. The result is often charming in its spontaneity and can also lead to discovery for the maker. This non-linear way of thinking can yield results that don’t happen by design. A downside to this approach is that there tends to be more failure; as all the mistakes happen in clay instead of on paper first. Good results are difficult to repeat. There can be some mental anxiety in trying to come up with great ideas off the top of your head.

Another approach is sketching everything before composing it on the surface, which allows the artist to choose the best from several options and spend less time making mistakes in clay. This method provides more confidence in drawing, but can lack some of the freshness and spontaneity of the original drawings. 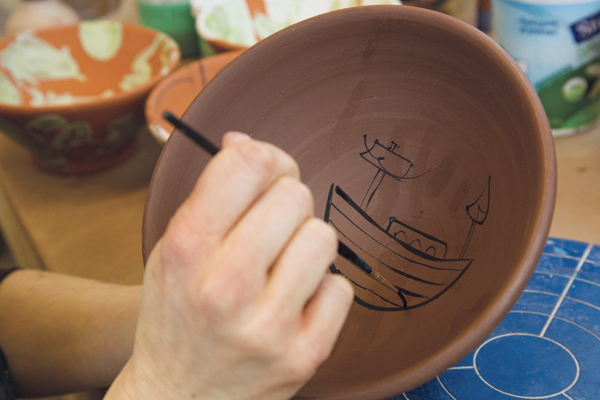 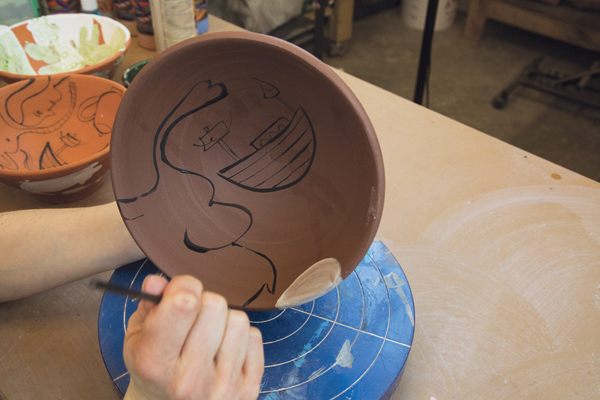 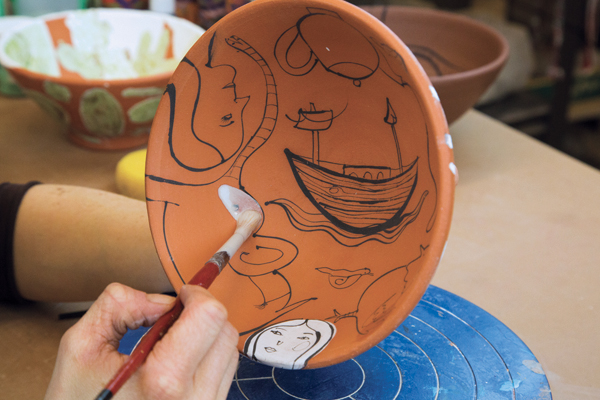 I have oscillated between these two approaches throughout my career. The surfaces of my bowls strike a balance between the two approaches. The images are sometimes spontaneous and others are taken from my comic diary. I start with one image (1), then turn the pot in my hands to draw another, different image (2). Each time I turn the bowl, I change the orientation of the drawing. The result is an otherworldly space where the user is forced to consider all these unrelated images next to each other. Unexpected relationships are formed. Inevitably, the result surprises the user.

The wide, round form of the bowl lends itself to this decorating style. Each bubble of imagery reinforces the form. Underglaze painting can be done before or after the bisque firing. I usually do it at the leather-hard stage because the clay is less absorbent, making longer brush strokes possible.

Tip: If you think you can’t draw, or the thought of ten blank pots gives you anxiety, I recommend keeping a comic diary (see above right). To do this, you can simply draw a four-panel comic of something that happened that day. It doesn’t have to be special or funny. The important thing is to do it often, if not everyday. This way, you will have lots of practice drawing and a wealth of material to choose from when you go to draw on your pots. 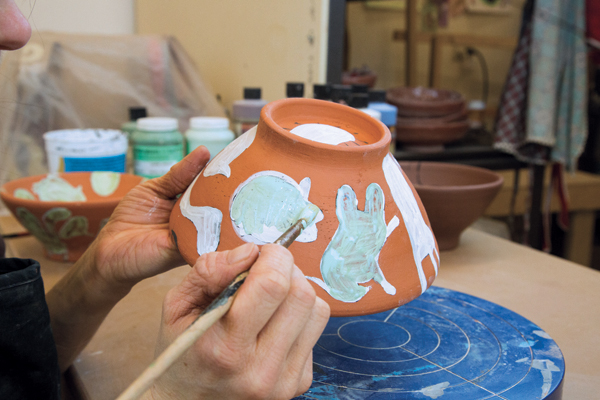 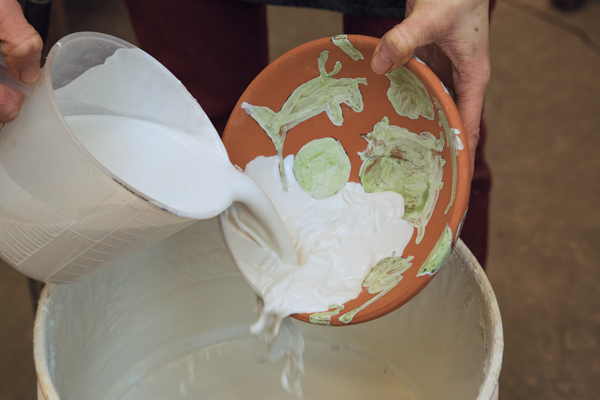 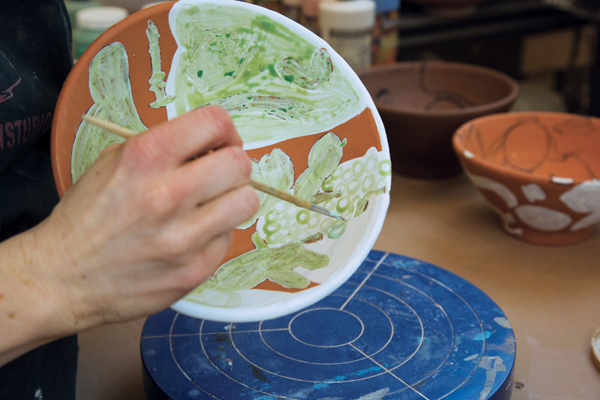 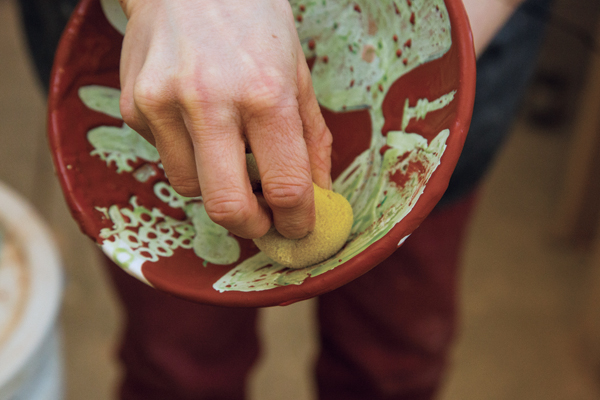 The freedom of improvisation is captured in the quick, casual brush strokes. I allow myself to ignore color concerns while I’m drawing on the bowls. My colors are a limited palette that come entirely from glaze. After the bisque firing, most of the drawing gets a clear coat of glaze (3), then wax is applied to resist color (4). The exceptions are some areas of pattern, such as fabrics. This leaves the warm color of the clay body behind the black line drawing. The second layer of glaze is poured on about half of the bowl (5). Some additional wax decorating is painted on the second glaze (6). Lastly, the third glaze is poured to cover any bare clay and to overlap the wax decoration (7).

In the finished, fired pieces the glaze will sometimes move, obscuring part of an image. It’s another instance of striking balance between discovery and control. An overall framing effect arises from the colored glazes surrounding the images. If the glazes move a lot, they can create a watery background environment. 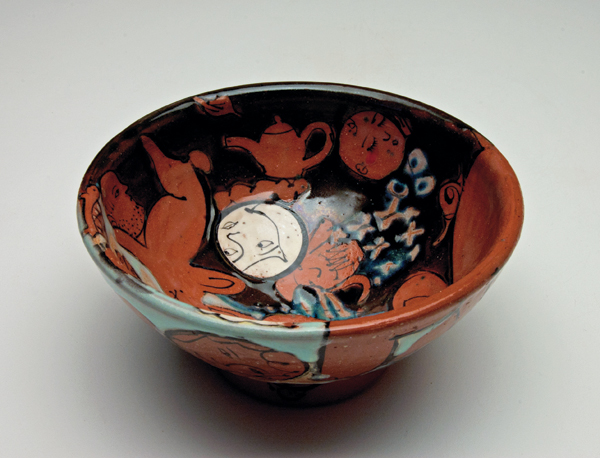 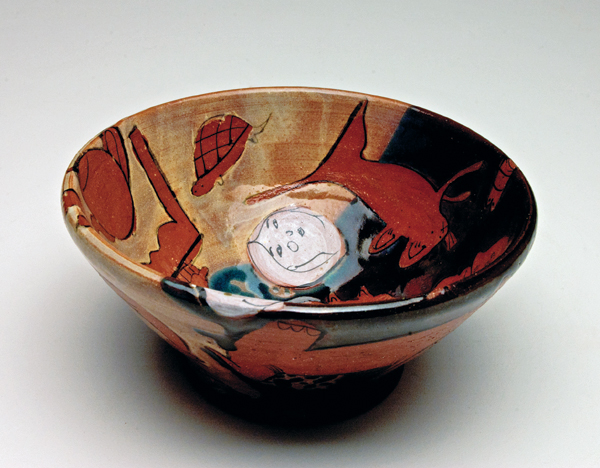 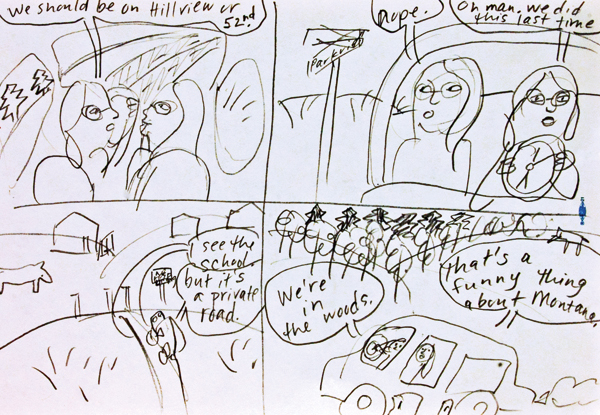 Although these pots look like they might be made for children, I intend them to provide adults with needed encouragement in our difficult world. Humor has the power to replace grimness with lightness. My pots promote a playful, tender approach to living. On the surface of bowls and other useful pots, my images take their natural place in our homes.

Donna Flanery is a studio artist in Missoula, Montana, where she lives with her husband. She received her MFA from the University of Florida in 2013. She has been a resident artist at the Archie Bray Foundation in Helena, Montana, among several others. Donna also serves as the studio manager for The Clay Studio of Missoula.