In the Potter's Kitchen: Creating a Winged Bowl Careen Stoll

Appears in the Sep/Oct 2019 issue of Pottery Making Illustrated. 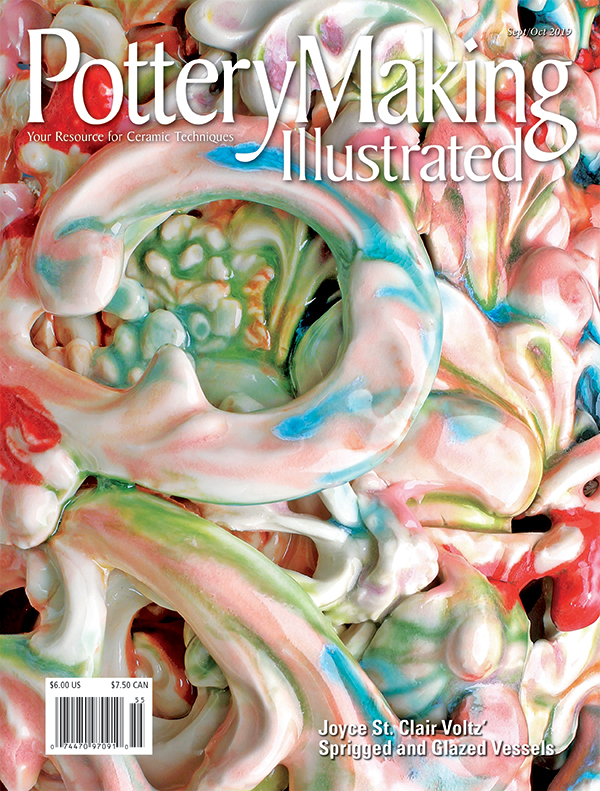 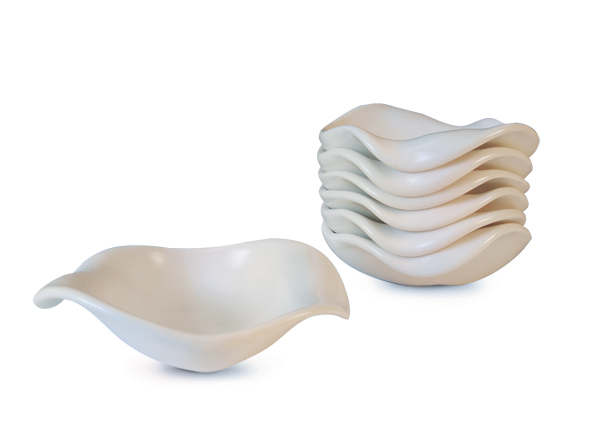 After so many years of making round pots on the wheel, I wanted some to be oval. Or better yet, egg shaped, in keeping with an old moniker. So I made a few oval-shaped bisque hump molds and started playing. At first, I just laid a round disk of clay over one and started squashing it around, but eventually I remembered a fascinating demo by Michael Hunt, where he formed and stretched the slabs he used to make Onggi jars. I started to peel my disk of clay off my treadle wheel and stretch it in the air, not in the traditional Korean way, but more like a pendulum grasped by the heels of my hands. This is the method of ovoid slab construction that I use for much of my flatter work at the moment. Plates, low bowls, open forms, and sometimes even platters all begin as a round thrown disk that is then altered in the air.

This wing bowl is made in the same vein, but with a loopy twist. To begin, take a few pounds of clay (I use porcelain) and center it on the wheel. I prefer to throw on a plaster bat because water is absorbed from the bottom of the clay slab, which is helpful later. After centering, compress the clay, forming a round disk. Linda Christianson taught me to use the outer edge of my left hand as a jigger arm to apply just the right amount of even and moving pressure, similar to throwing, to form a slab of even thickness (1). You can use your right hand (if you spin your wheel counterclockwise) to deliver pressure. Note: Lock your elbow down by your thigh to utilize core strength when throwing in this manner. 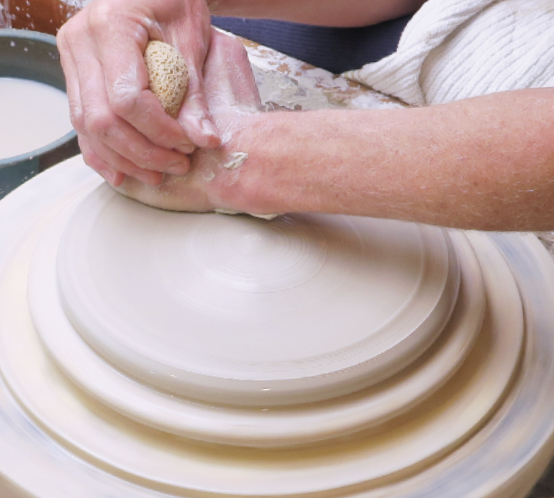 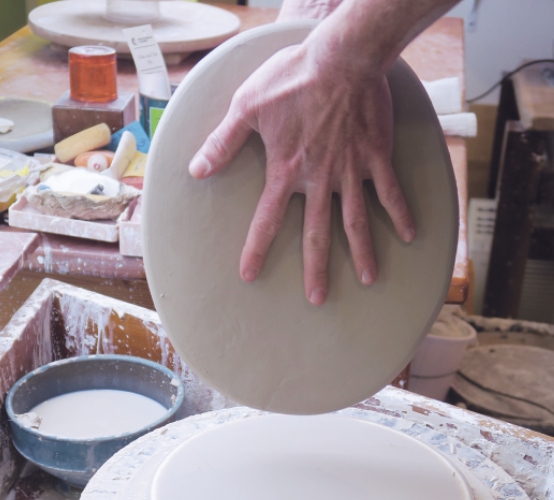 Compress the slab with a wide flat rib, paying attention to the edge (which will become the rim of the bowl), clean your hands, and cut the slab off the wheel. Pull that wire tight so that you don’t dramatically alter the thickness of the slab! Then peel it off the wheel and hold it between your hands in a prayer position with your fingers pointed downward (2). Begin to stretch the slab, using gravity to help you. As you work, slightly adjust the position of the heels of your hands so that they don’t make a dent in that one spot. Hold and look at the slab, then stretch the part of it 180° away from the part you just did. Clearly, this is a kinetic process and hard to capture in still images. There is a quick video on the origins page of my website ( www.lusciousporcelain.com/philosophy) that shows what’s happening here. 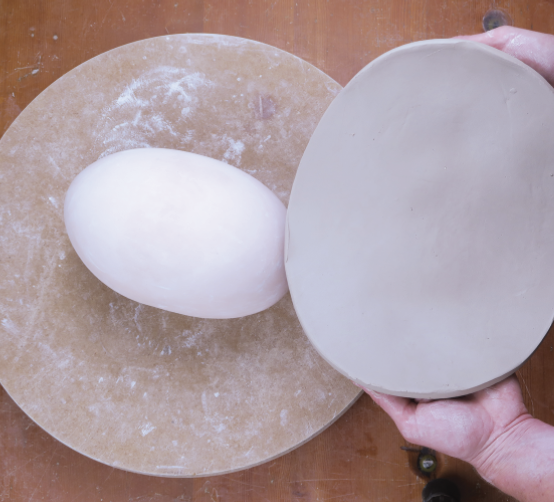 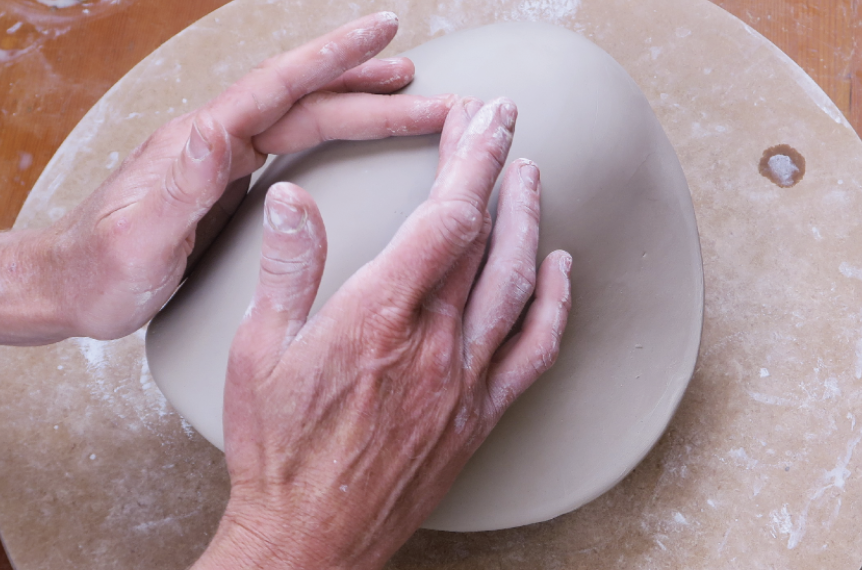 Take your oval slab and hold it above your oval mold. Certainly you could make a simple oval dish by aligning it with the mold in parallel. But for this form, align it perpendicular to the mold’s longer axis (3). The mold I use is about 3×3 inches in cross section, so it is a relatively deep form on which to shape a slab. Lift the overhanging sides lightly to keep them away from the absorbency of the bisque mold for the moment. Focus on the body of the vessel, and compress the clay together and onto the surface of the mold (4). It’s kind of like collaring in a bottle in that the clay gets thicker when you do it. Take the fleshy part of your thumbs and incrementally bring them toward each other with the clay caught between. The trick is to avoid ridges from shaping the clay too rapidly. These ridges will show up later after the firing. Do this on both long sides of the oval. I use a chamois to round over the lip and a red Mudtools rib to burnish the bottom surface (5).

Now, focus on the wings. There they are, drooping down past the mold. Curve up and cradle one at a time against the outer edge of your left palm, and take a dollop of slip on the finger of your right hand (or reverse hands as you see fit to your body). Pressing the clay against your palm, squish and slide the clay until you have a nice divot that has conformed to the center of your left palm (6). Do it again on the other side! 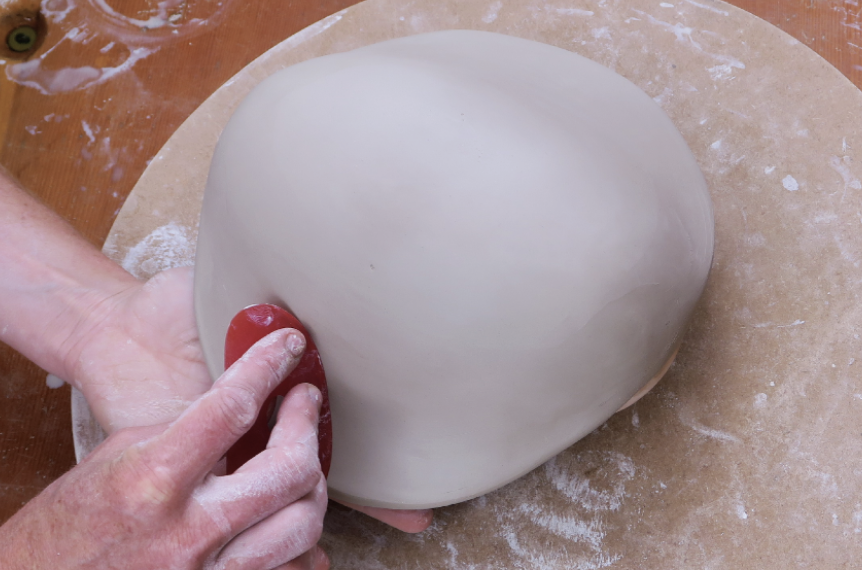 For the purposes of stacking, I take a mental note about the length that the wing extends past the mold, or the way the curve continues. After a while of making these, the hand learns how to be a machine about it, and stable stacking is more likely if the sides are even and consistent from bowl to bowl.

The bowl will take minutes to an hour or more to set up on the mold, depending on how absorbent the mold is. Be careful to not let it get too hard, because you will still need to remove it from the mold and create a flat bottom. Since I have a domed mold, I just flip the bowl over and gently press it, now upright, onto the dome in order to form the foot. Typically I do this at as soft a stage as I can get away with. Hold your hand with fingers widely spaced to support the bowl with as much surface area as you can manage. Distortion is always an issue when removing the bowl from the mold, and creates a memory that the clay holds during the firing that can lead to warping and rocking of the final form. 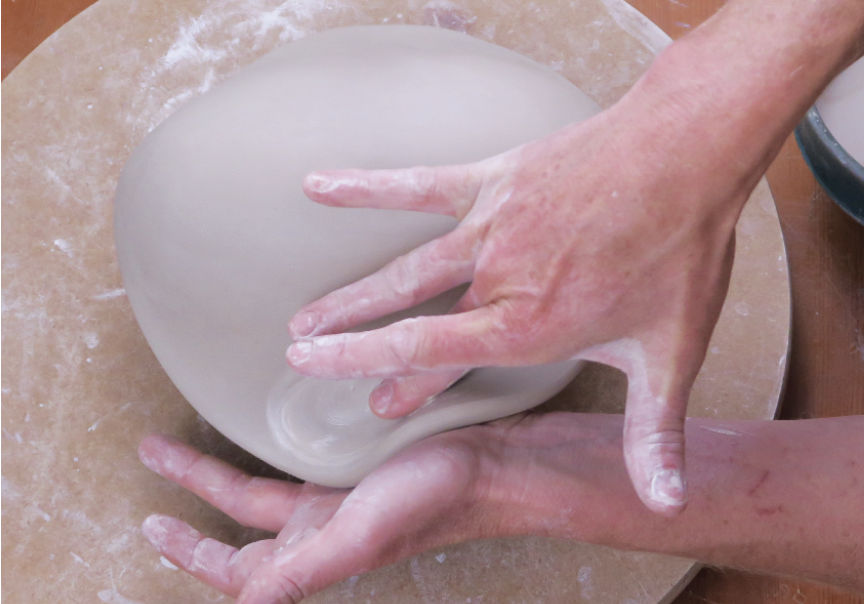 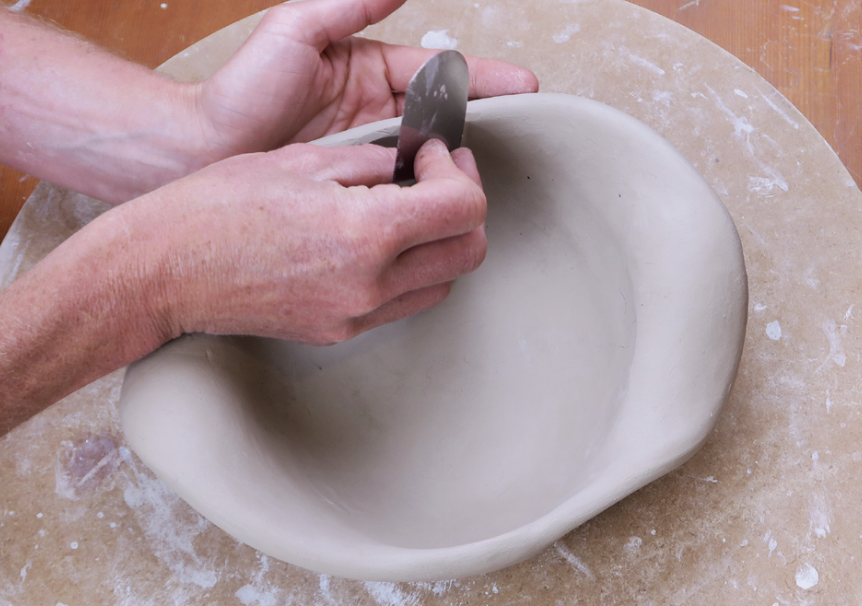 Once it’s upright and set up further, you can cradle the outside of the lip as you refine the inner lip. I use a metal rib for this scraping or light edge work (7). You could use a Surform to make drastic changes. Use a chamois folded around the lip to round it out nicely.

That’s it! One thing that I like about this form is that it requires no trimming. As long as you capture the clay at the best firmness for each step, it’s done and ready to dry relatively quickly and seamlessly. And, because the walls are fairly even, it will dry safely in most climates without needing to be covered in plastic. 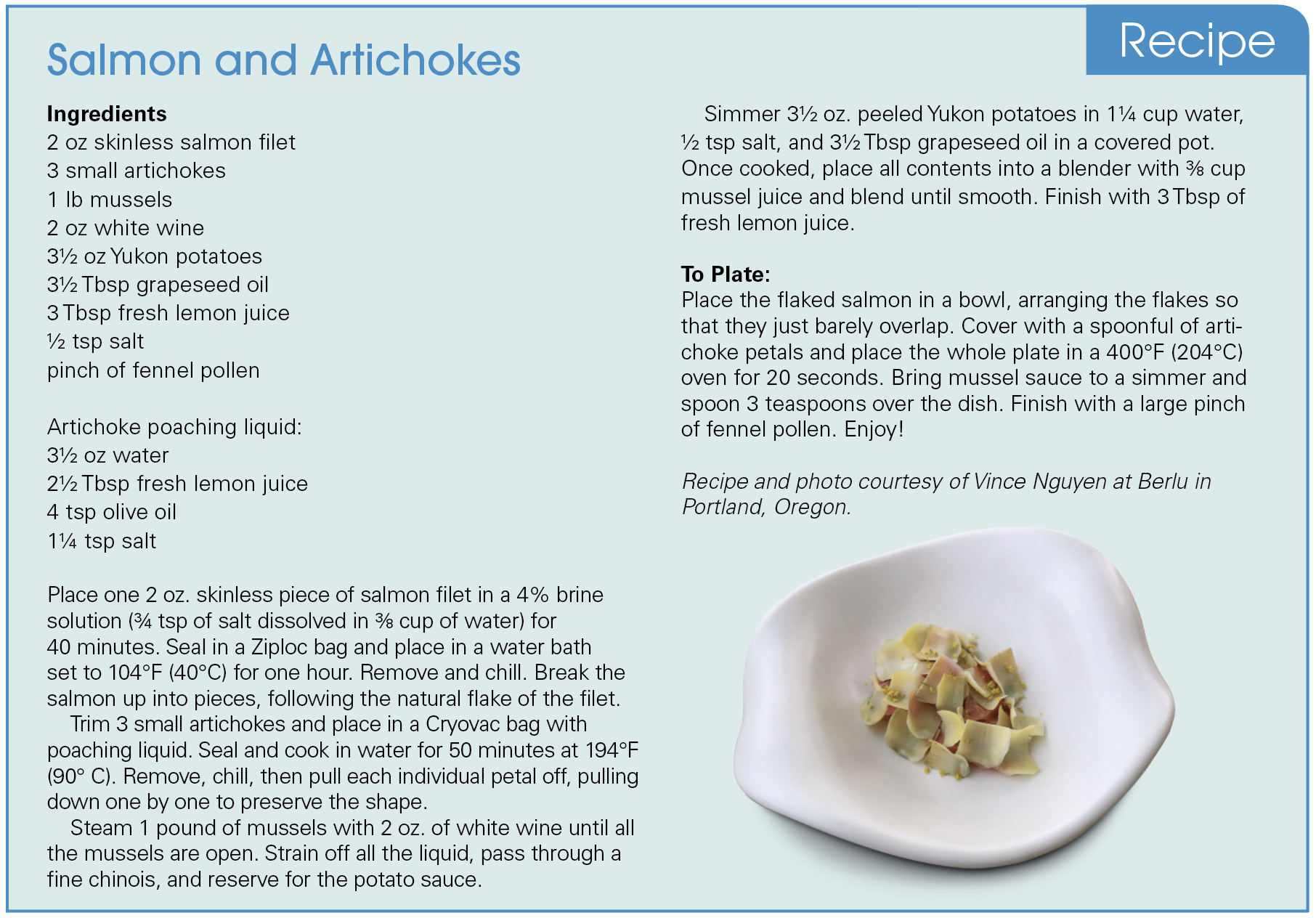 Careen Stoll learned pottery from Linda Christianson, John Neely, and Sylvie Granatelli, who helped her as guiding stars of studio practice and awareness of ecological impact that informed construction of the innovative Tin Man kiln in Portland, Oregon. She now integrates permaculture and pottery practice on her land in southwest Washington.