Appears in the Mar/Apr 2015 issue of Pottery Making Illustrated. 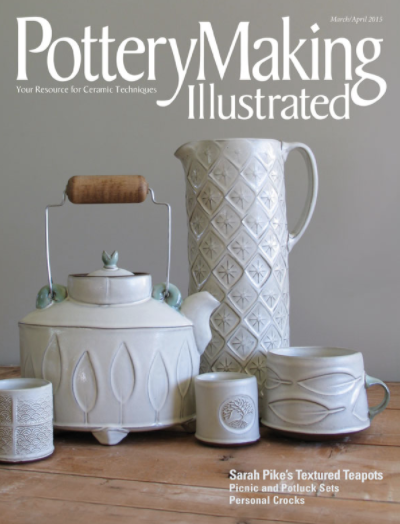 Within industry, dichroic flashing is primarily done directly to finished objects—either glass, plastics, or porcelain. The dichroic flashing process (as done by CBS Coatings by Sandberg in Orange, California) applies a thin silica and metal coating to objects in a vacuum chamber. In the process, quartz and metals are vaporized by an electronic beam gun, condensing micro-thin metal crystal layers as a ceramic bond onto the material’s surface. A new twist to this process is to separate the dichroic flash from the substrate and crush it to make a sparkling glitter. After firing the flecks, chips, and dust onto the surface of a glaze-fired piece, the finished result looks like glitter floating in and on the glaze.

It’s possible for potters to mimic this process in their own studios. CBS makes and sells copper sheets coated with dichroic film. That film can be removed from the copper sheets, attached to a glaze surface and fired on permanently (figure 1). The sheets are pure copper, 6×12×0.128 inch, and come in 20 different colors. Each copper sheet is flashed with a ceramic coating.

Caution: When releasing the dichroic flashing from the copper sheet as flakes, wear eye protection, gloves, and a dust mask to protect yourself and work in a well-ventilated space. Turn the copper sheet over onto white glossy paper (flashing-film-side down) and lightly pound it. The flecks released range in size anywhere from dust to one-inch squares. The larger flakes can be crushed using a mortar and pestle or a rolling pin to create a finer dust or a smaller flash, but either the larger or smaller sizes can be attached to a porcelain form.

1. For controlled placement or designed patterns: Wearing a dust mask and using a soft brush, coat the cleaned ceramic surface with the glue mixture and sprinkle on the crushed flakes or dust before it dries. Allow this area to dry before moving on. Start with small areas and work in stages if you’re covering a large pot.

2. For random pattering: Coat a soft brush with the glue mixture and use it to pick up individual larger flecks or small groupings of flash or dust, then place them on the desired area. Continue this until the desired area is covered.

3. For widespread, controlled placement: Place the glue mixture into a bowl, then mix the flash in. Use a soft brush to spread the flash on the desired area.

4. For widespread random placement: Mix the glue and the flash together then pour them into a spray bottle and spray the mixture on the ceramic piece. Due to the coarseness of the flash, use a sprayer with a larger aperture opening. Several thin coats are best. The drawback to this technique is that a certain amount of the flash mixture is lost to overspray.

Allow the flash mixture to dry, then carefully spray a clear or colored transparent glaze over the ceramic form—doing your best to avoid blowing off the flash. If you have trouble getting the glaze to adhere, warm the piece up prior to applying glaze. This will cause some of the water in the glaze to evaporate more quickly. Several thin coats are best to prevent the glaze from running off the pot during the firing. Glaze applied too thick may run and distort the finished flash design. Dipping, brushing, or pouring the glaze on the flash may cause the flakes to move or dislodge.

Fire the flashed and glazed pieces to the glaze’s maturing temperature—ranging from cone 06 or hotter.

The fired surface sparkles and shifts colors depending on how it’s viewed and what type of light it’s seen in. The dichroic flash adds a WOW factor to ceramic pieces, and is a wonderful new technique available to the ceramic artist. John W. Conrad is a retired ceramics professor living in San Diego, California. He is the author of nine technical ceramic books and numerous articles for the studio artist and is now a guest professor at Luxun Academy in China. To learn more about John and his work, visit http://johnconradceramics.net.