Appears in the Sept/Oct 2017 issue of Pottery Making Illustrated. 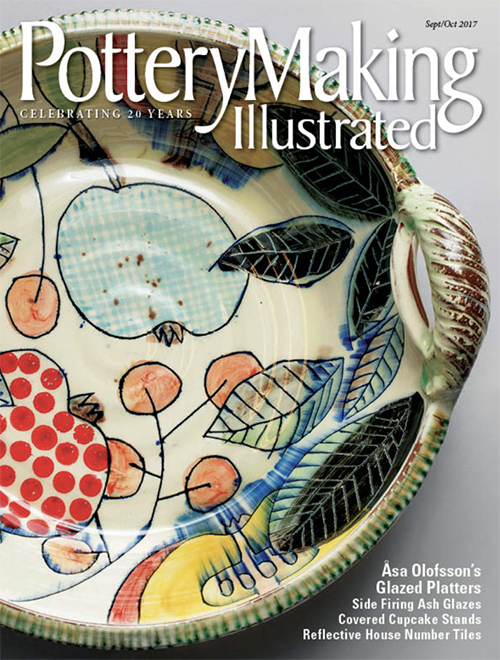 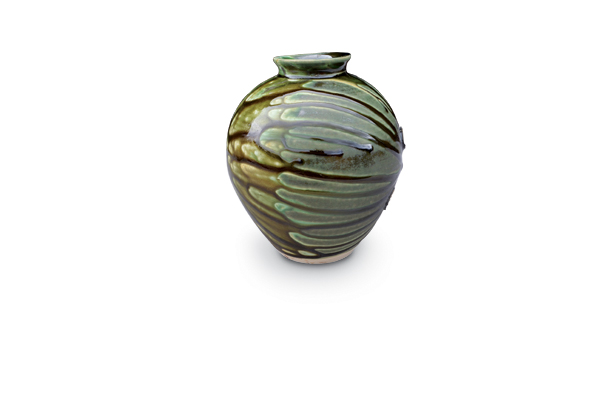 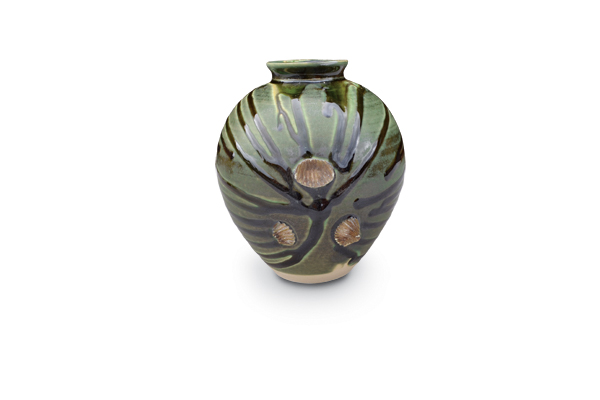 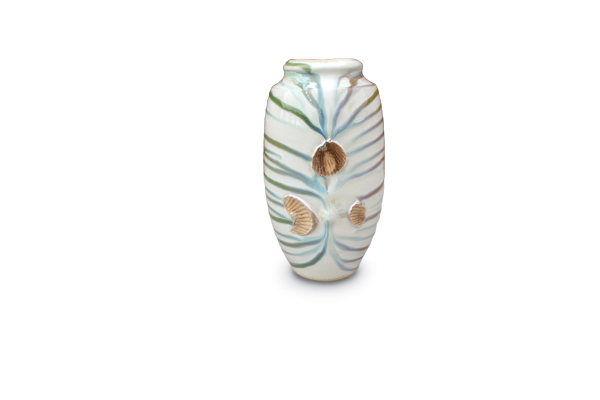 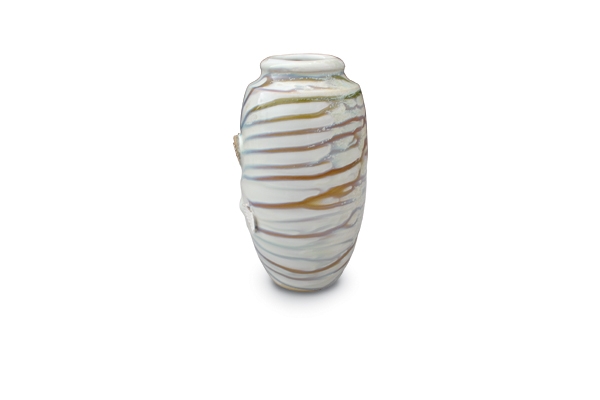 I’ve always loved ash glazes. For a long time, I fired in other people’s reduction kilns, often waiting months in between firings. When I finally got my own electric kiln, I was thrilled to start experimenting with ash glazes in cone 6 oxidation firings. I got some decent results, but too many of the pots ran and fused with the shelves. So I started firing pots on their side, on sea shells, as potters often do in atmospheric kilns. The results were hard to argue with—and it didn’t matter that the glazes ran. In fact, runny glazes are perfect for side firing because of the dramatic effect it produces. Putting a drip tray in the kiln takes away any risk of ruining shelves. My obsession with ash glazes means that I have ruined a lot of kiln shelves over the years, but you don’t have to!

Choose the Best Piece for Side-Firing

Throw or handbuild a piece that’s either cylindrical or convex (1, 2). A concave piece won’t have a good surface on which to place the piece sideways supported by sea shells.

A drip tray protects your kiln shelves and is the reason side-firing circumvents that problem. Simply roll out a clay slab slightly larger than your pot to use as a waster slab or drip tray. Making it larger than the pot ensures that any possible drips will be caught by the tray—I try to use old discarded slabs or rejected plates as drip trays. Curling up the sides of the drip tray helps prevent any glaze from rolling off onto your shelf (3). Bisque fire your drip tray before using it. 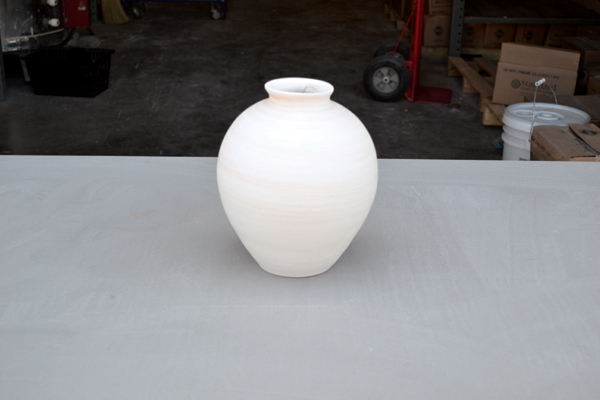 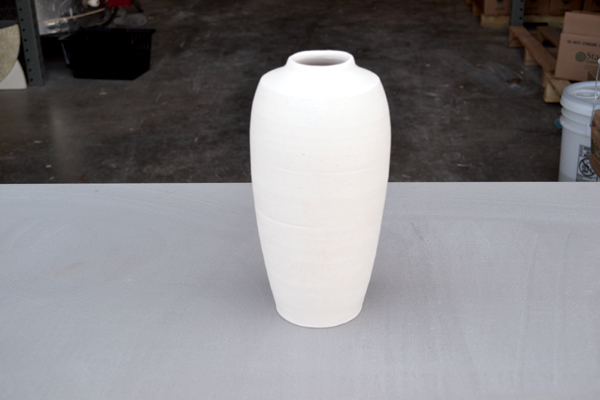 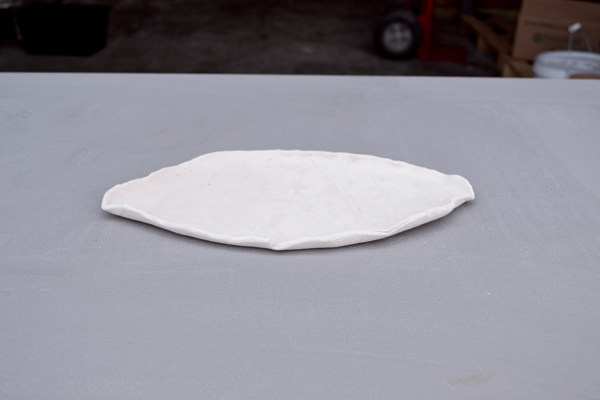 To make an ash glaze, use ash as you would any other glaze material. Find a source of wood ash, such as fireplace ash, and properly prepare it for use. To do so, dry-sieve the ash through a coarse-mesh sieve. I use a very coarse kitchen sieve, then sieve again through a 40-mesh sieve. Don’t add any water to the ash prior to sieving it. Caution: Sieving ash creates dust, so a properly fitted dust mask should be worn. You should also wear gloves, as ash is caustic and can be hard on the hands. Once you have dry-sieved your ash with a 40-mesh sieve, use it as you would any other glaze material. See page 14 for some of the recipes I use.

While wadding is traditionally only used in atmospheric kilns to prevent pots from sticking to the shelves, it is necessary for side firing in electric kilns.  Sea shells turn to powder (calcium oxide) during the firing, and will not support the weight of a pot.  Using wads under the shells prevents the pot from falling onto the drip tray and sticking to it. Making wadding for use in an electric kiln is easy. Simply mix grog into some moist clay (you can use a mid-range clay body, or EPK and some water).  If using a moist clay body, something already groggy is preferable.  Porcelaneous clays should be avoided, as they have a higher chance of cracking or warping in the firing. Sprinkle grog onto your wedging surface and wedge the grog into the clay (4). This opens up the clay and makes it less likely to explode in the firing as residual moisture escapes.

Choose seashells that you can safely  balance your pot on, given your pot’s size. You should also consider what kind of impression you want left in your final pot when choosing shells. I usually buy 2 or 3 bags of shells (at craft stores for $1–2) with different sizes that I feel could successfully support the pot. Then, I try them out and choose based on which makes the pot/drip tray/wadding structure seem most stable.

Glazing for the Best Effects

After bisque firing your pots and drip trays, it’s time to glaze! For me this is the fun part. Dip, spray, or pour an even coat of your base glaze (not an ash glaze) onto the pot’s exterior. I usually like my first glaze coat to provide a nice contrast with the color(s) of the ash glazes, and will allow them to run their hearts out. Remember that we’re using drip trays, so we don’t have to worry about dripping. A glaze with a matte surface that allows an ash glaze to run a lot over it is ideal here, because the shell will come off after the firing more cleanly than if you used a highly glossy glaze. It’s also nice to use a glaze that facilitates crystallization of the glazes in the cooling (V.C. Matte).

Place three wads in a triangle on your drip tray and add a shell, face down, on top of the wads. Put a glazed pot on the shells, on its side (5). Using a brush, coat the top-facing surface of the pot with an ash glaze. I prefer to use ash glazes that are slightly thick for this, so that I’m assured they’ll run. Allow the glaze to dry, then add additional ash glazes as desired (6). I sometimes use 2–3 ash glazes for a diversity of colored drips that mingle with each other as they melt. 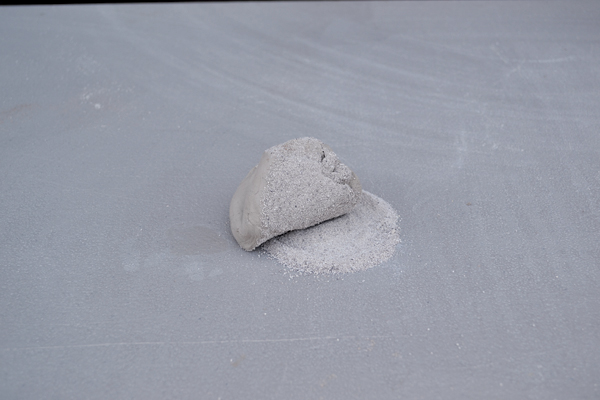 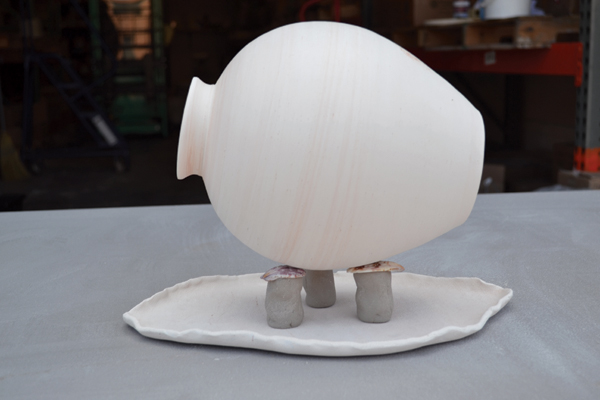 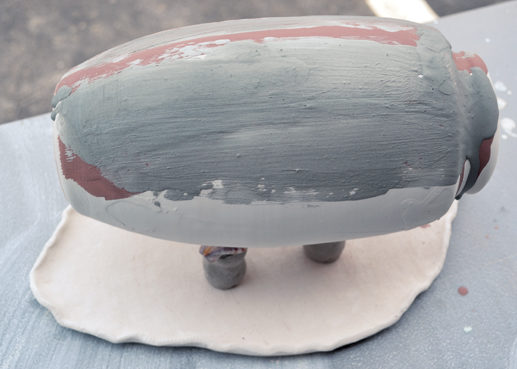 Temporarily remove the pot from the shells and move the drip tray, wads, shells and all, into the kiln. Replace the pot onto the shells, making sure the pot is stable. Wait until the wads are fully dry, then fire the kiln to cone 6.

After the firing, use a rubbing stone and/or Dremel to clean up any sharp edges of shells and remove leftover white powder (calcium oxide) that is left after firing. 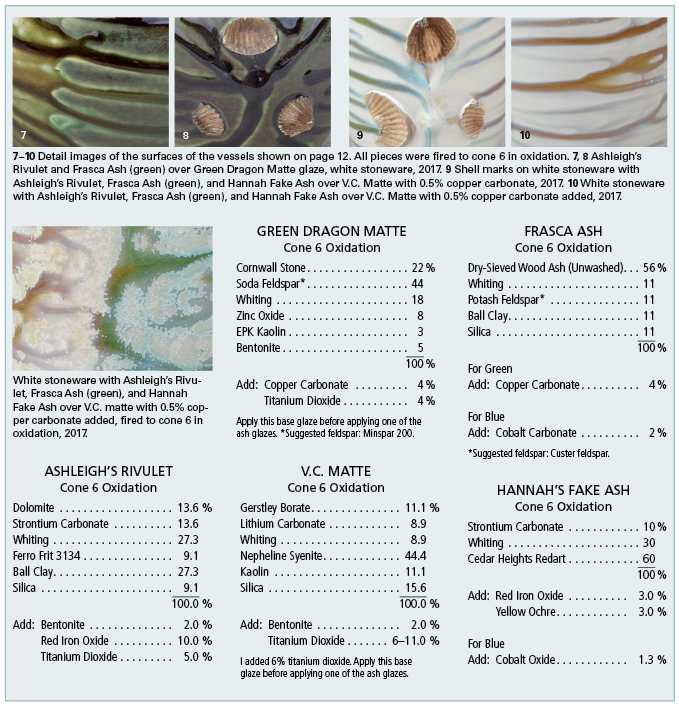 Special thanks to Kerri Henry for letting me use her kiln for this article.

Ian Hall-Hough is a long-time potter and manager of Clayworks Supplies, Inc. in Alexandria, Virginia. You can find his work in the supply shop or online at http://hallhoughceramics.weebly.com.