Appears in the Nov/Dec 2017 issue of Pottery Making Illustrated. 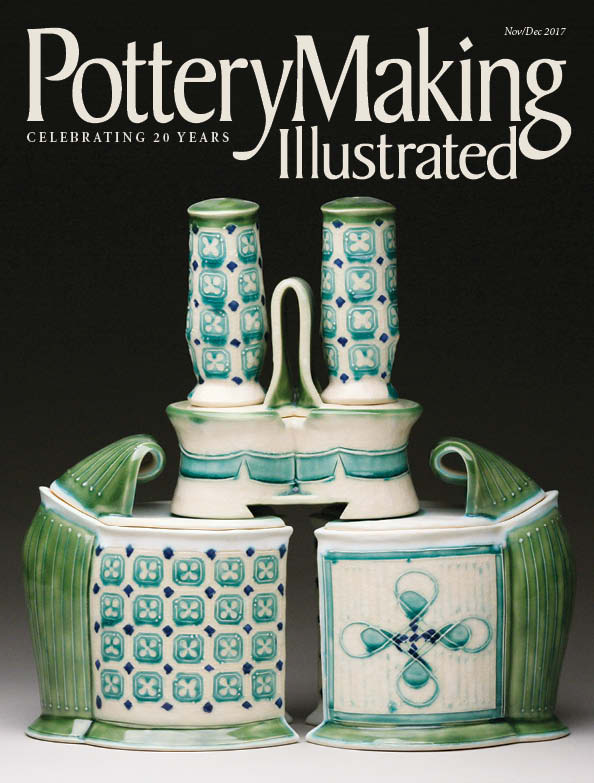 I’m not sure whether I like setting the table more in anticipation of the meal that’s about to come or for the act of assembling pieces from my ceramic collection as a whole. I remember as a kid, all the plates matched and it was a very simple task: each place setting got a plate, a fork and a butter knife on a folded paper napkin, and a small glass tumbler. Done.

Fast forward to today and now I treat the table setting like a small curated show. Pulling handmade dishes from the cupboard and deciding what subtle combinations make sense is a moment of delight—and one I often take far too long to do. Picking out two plates to set opposite each other is the most critical decision and will set the tone for the rest of the table. Size and shape, along with the style of rim, and most importantly, the ways that surface decorations play off each other inform my decision. Small cups for water and a pitcher are factored in next. Depending on the meal, salt and pepper shakers, a butter dish, possibly a small plate or bowl, and a condiment set join the group. And, then there’s the serving dishes to consider. At this point the meal is probably getting cold and I’m about to get outvoted.

The history of the table setting is a complicated one, with the choice and placement of silver/flatware always causing the most confusion. The late 18th century and early 19th century saw a proliferation of dishes at the table, with meals being served in only two or three courses. By the mid-to-late 19th century, diners were eating foods in separate courses and the number of forks on the table multiplied profusely as did the rules for using/eating with them. Confusion abounded. The early-to-mid 20th century saw a decrease in formal dining. Fewer pieces were in attendance, but the rules were all over the place, causing the flatware, the napkin, and the drinking vessel to rotate around the plate from meal to meal.

For over 200 years, the rules of table setting twisted and morphed, but the placement and the function of the plate could always be trusted. It’s the one piece through time that has caused the least confusion, has held its place, and is the true workhorse in the meal.  Go ceramics!

With this issue, we want to not only help you curate your own table, but also provide you with a few options to make your dinnerware, including the plate. Zachary Wollert demonstrates his decorative chattering technique on sets and Katrina Chaytor forms elaborate salt and pepper shakers. Lisa Pedolsky handbuilds tall bottles while Bonilyn Parker adds a flower brick centerpiece to the setting. There’s no doubt that you will have plenty to do in the studio with these projects and even more fun deciding how to set the table after you’ve unloaded the kiln. Cheers!