Appears in the Jul/Aug 2015 issue of Pottery Making Illustrated. 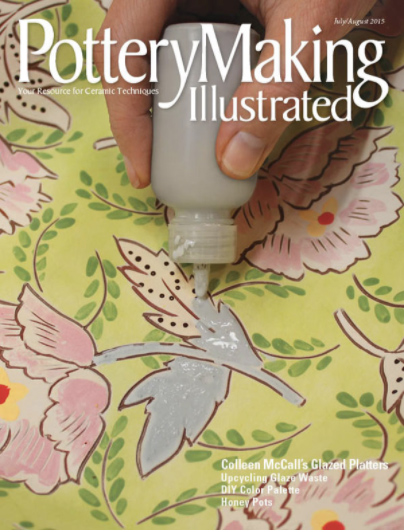 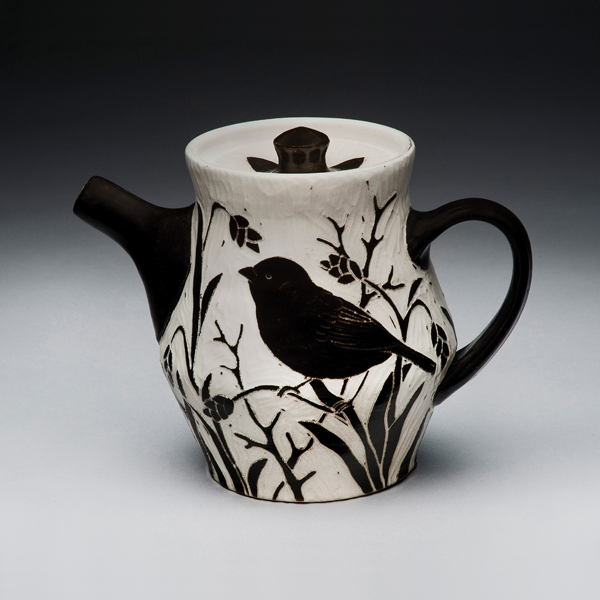 Playing around with brushing on slips and glazes then removing them with different tools led me to sgraffito (Italian word meaning to scratch away) decoration. While in college, I started decorating pots by drawing through black slip, revealing the stoneware below. Once fired, it didn’t look like a drawing but more like a photo negative. To get the reverse look of dark shapes on a white ground, I carved around the line I was drawing and removed the negative space, leaving the line. To further refine the quality of the drawing, I switched to porcelain clay, which has finer particles. It gave me a nice clean background for my narratives. But, I was still carving slips at the leather-hard stage and the line smeared as my tool moved through the slip, muddying the nice white porcelain background. Then I discovered terra sigillata (Latin meaning sealed earth). The combination of porcelain and terra sigillata gave me the crisp graphic quality I was trying to achieve.

During my early studies in pottery, I learned to throw on a treadle wheel (1 and 2). The pots I loved at the time were made on one and I wanted to follow in that school of pottery making. Also, I enjoy the control and quietness of the this style of wheel. Before I dig into any decorating, I think about the forms I would like to make on the wheel. Since my decoration is all encompassing, I choose to make pretty straightforward forms. The simple forms allow me to divide the pots into segments for decorating. 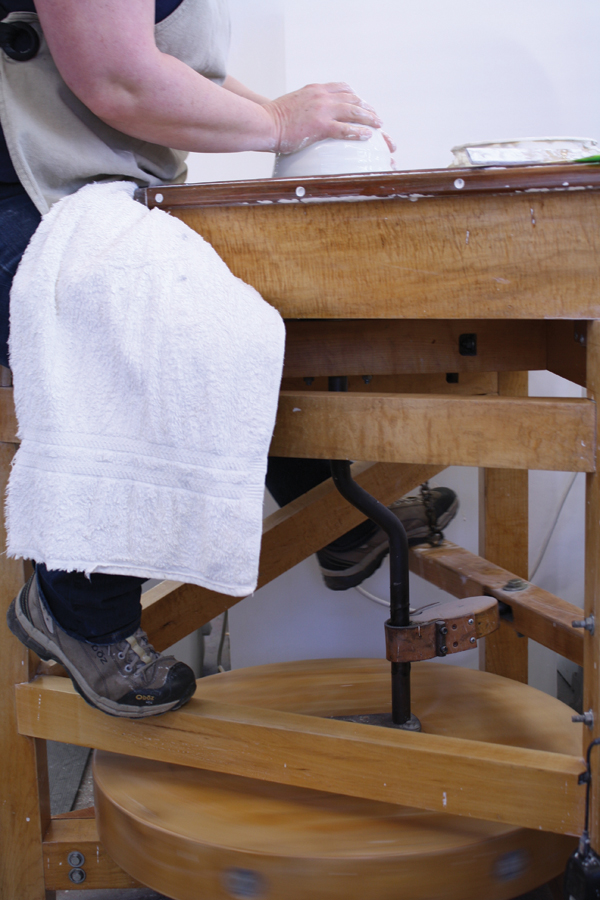 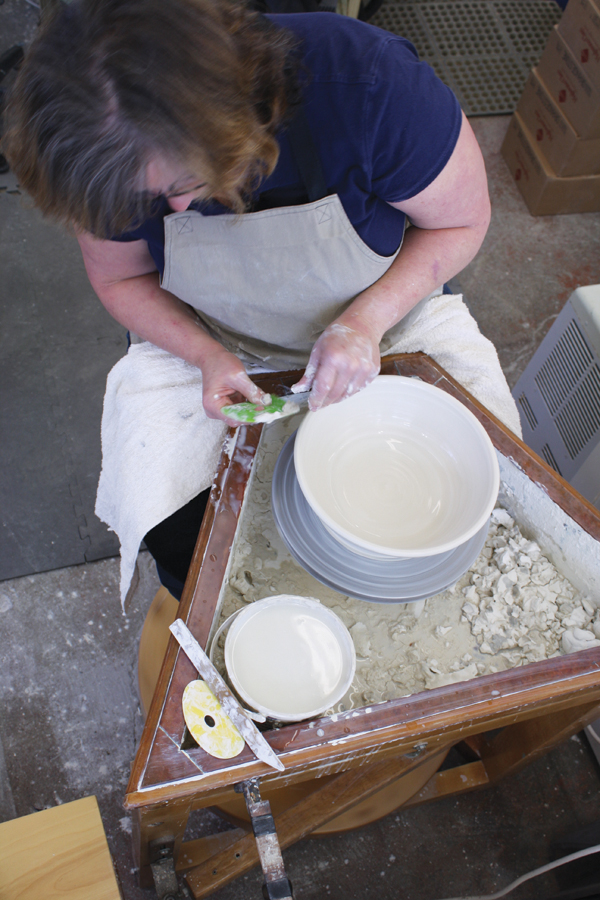 My imagery is very much connected to my early interest in Minoan pottery and their notion of depicting scenes from everyday life. Therefore my early images and scenes stem from memories of my grandparents’ farm, growing up in Louisiana, and recognizable everyday items. I have developed an iconographical library of images over my career that I still draw from today, continuously adding to those domestic stories by going outdoors and carving botanical scenes, inevitably adding birds and insects to those scenes.

Terra sigillata is like a tight second skin on the pot, often used to seal porous low-fire clay bodies. It’s made by deflocculating a clay (or combination of clays) and isolating the fine particles. The recipe I use doesn’t require ball milling due to the fine clay particles that make up Grolleg kaolin. I find I get a large yield and this recipe is very easy to make. Because water isn’t the same in every city, it’s critical to use distilled water to maintain consistent results. Using a drill and paint mixer attachment in a 5-gallon bucket is the easiest method for mixing. Let the mixture sit untouched for 36 hours in a glass container if you have one. After settling, three layers will form: the waste layer on the bottom, a thin layer of water on top, and the usable terra sigillata in the middle. The deflocculent, trisodium phosphate (also known as TSP and available in home stores), charges the particles in the Grolleg causing them to repel and separate. Because the waste at the bottom is so thick, the layers are easy to distinguish, making the decanting process easier. A batch of this recipe lasts me about three weeks. Once mixed and decanted, the terra sigillata should be the consistency of whole milk. I add 1 cup of terra sigillata to 1 teaspoon of black Mason Stain 6600. Always test other stains or oxides before using. If evaporation occurs during use, add a little distilled water. Keep the mixture covered when not in use

Once a pot is bone dry, brush on two thin coats of terra sigillata, being careful not to overlap brush strokes, and waiting a few minutes between coats. If too many coats are applied it could cause the sigillata to craze and pop off after the glaze firing. 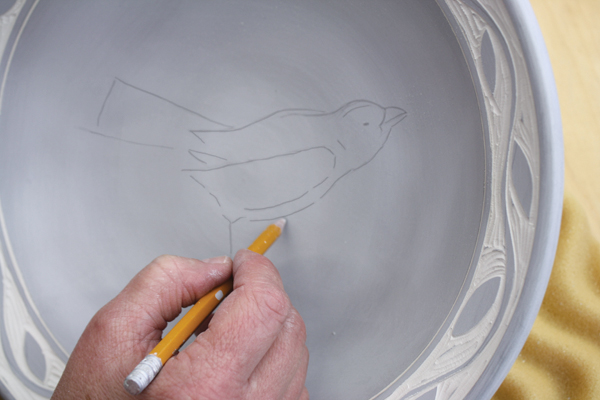 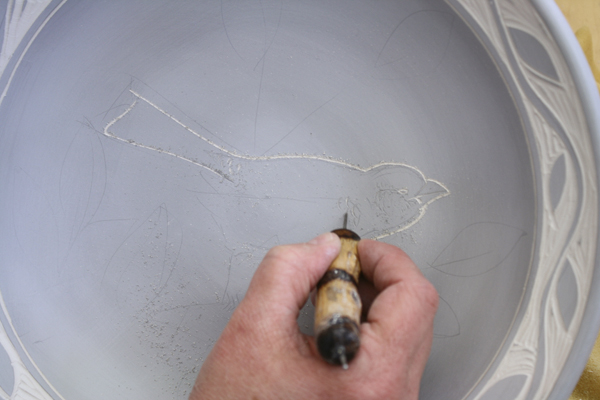 Use a dull pencil to lightly lay out your design, being careful not to press down too hard because it will leave a mark or remove some of the terra sigillata (3). The goal here is to draw on top of the sigillata, not start the carving process.

After you’re satisfied with the drawing, use a worn needle tool (or similar tool) to outline images (4). If the tool is too sharp, it leaves a jagged line. To remove the background, I use the Kemper WLS carving tool or wire loop tool for tight spaces, and for larger spaces I use a small Dolan loop tool (5). With my carving marks I can create a sense of rhythm; making a leaf look like it’s blowing in the wind (6) or a bird fluttering in the trees. 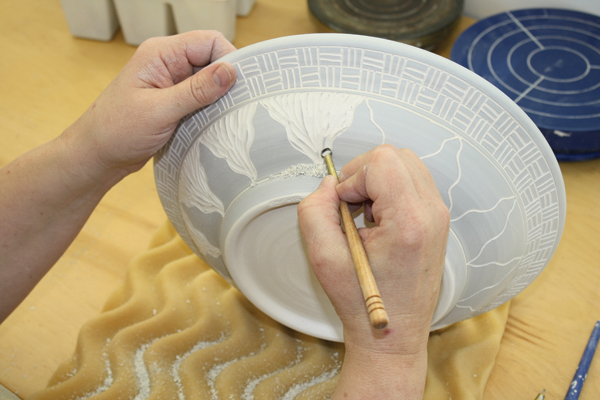 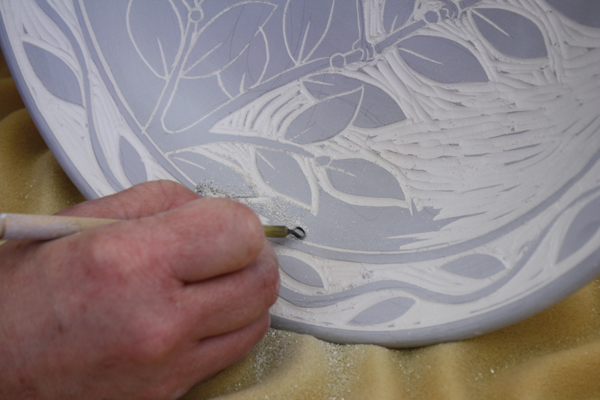 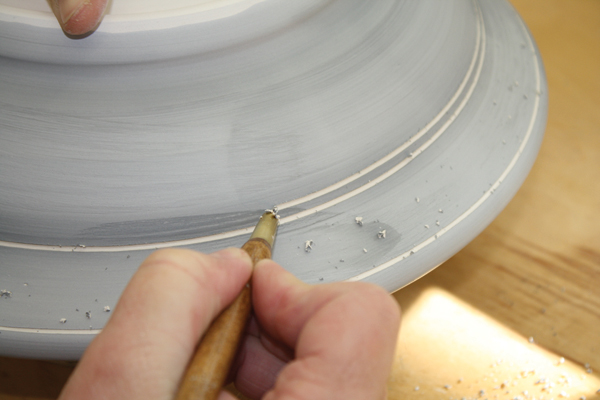 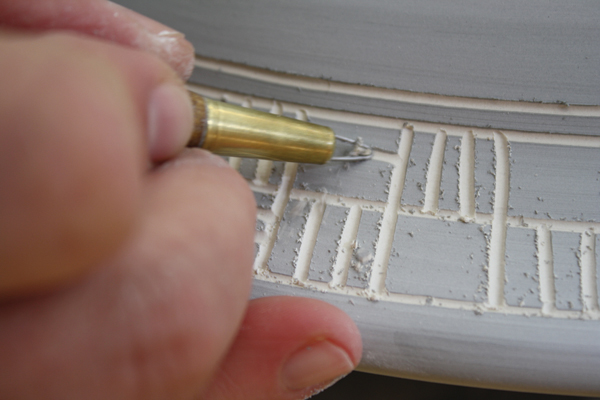 In setting up my decorations, I like to give myself starting and stopping points, such as a distinct foot or visible spout and handle attachments. Conversely, I often negate the form all together and wrap a scene around the piece.

Repeated patterns have always been appealing to me; repetition of a field of wallpaper motifs, lines created in rippling water, or crops in rows (7 and 8). Looking for these types of arrangements in nature or our modern landscape is a source inspiration.

Caution: The carving process produces a lot of dust so I wear an apron and carve over a square of egg-crate foam that catches the shavings, keeping them contained and making them easy to dispose of. The dust created in this process is extremely fine. I never blow the dust away while working, I also never sweep it away. I only use a only vacuum with a HEPA filter (9).

When the carving is complete, I add a pop of color with AMACO Velvet Underglazes to accent the main images (10). 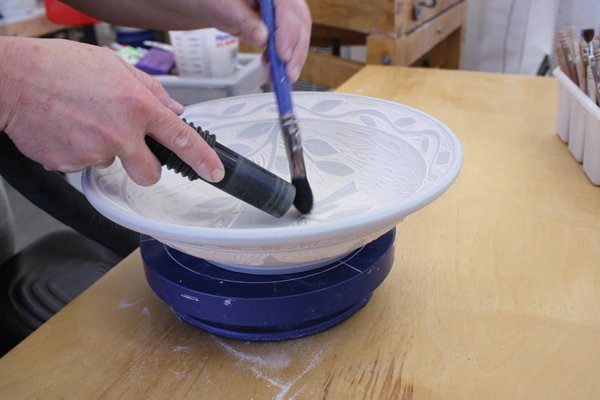 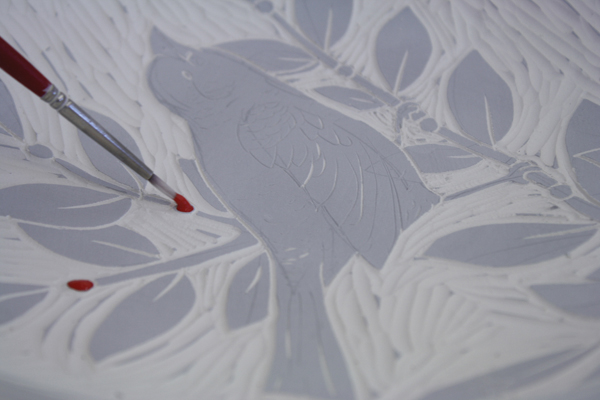 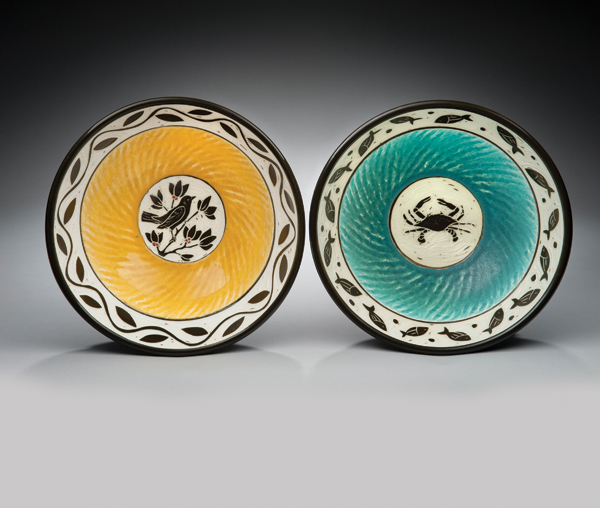 I have always gravitated to atmospheric firings, I love the tonal variation I get with clay and especially glazes. I choose glazes that will complement the aesthetic of the pot, giving it depth and personality. I am able to achieve this goal best in a gas-fired salt kiln. I introduce just enough salt to add a little sheen to the carved areas of the pot. There’s no need to burnish or use a clear glaze in this firing process as the salt is a flux that lowers the melting point of the silica, causing it to slightly melt on the outer surface of the pot, creating a glaze. This firing process also affects the liner glazes and the more open areas on forms such as serving bowls or plates by accentuating the variations in color.

Karen Newgard has been a full-time studio potter since 1997 and currently has a studio/gallery in Asheville, North Carolina’s River Arts District. Learn more about her work at karennewgardpottery.com.