Appears in the May/Jun 2020 issue of Pottery Making Illustrated. 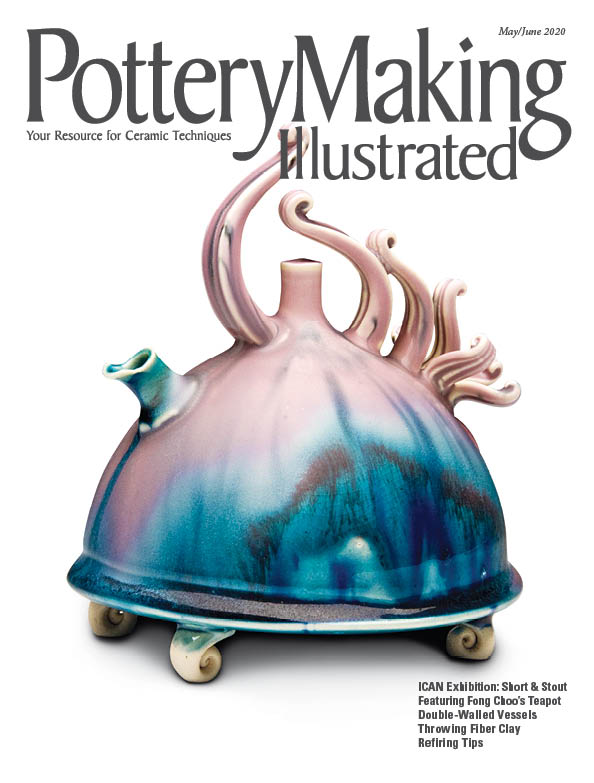 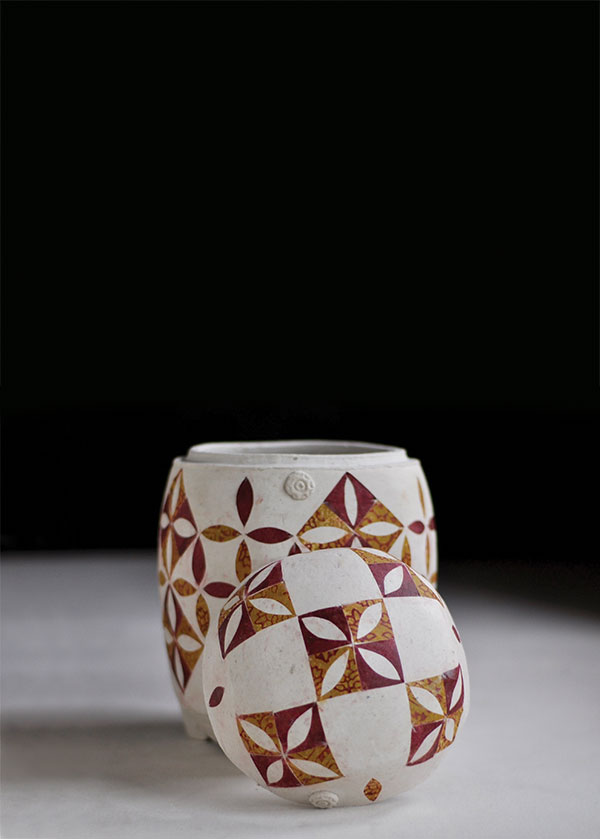 I think a lot about the environmental impact that pottery making has on the earth. Potters make objects that are permanent. Sometimes I have a problem with this, and other times I’m okay with it. We need to use functional objects in our daily lives. I would rather have a few thoughtful, handmade objects that are useful and add a little bit of joy to my life than have a multitude of mass-produced products that have no value to me other than functionality.

For years I’ve thought about how I can lower my carbon footprint in my everyday life and as a potter. The first thing I think about is that I don’t use a car daily, as my commute is a walk from the house to a renovated attached barn (my studio). On the flip side, I fire my electric kilns an average of three to four times a month. This concerned me for years—so much so that we installed solar panels for the house and studio in 2017. The solar panels provide nearly 50% of the electricity for our home and studio. Trying to minimize the impact that being a potter has on the environment also led me to start making biodegradable cremation urns.

Back in 2005, I began making ceramic cremation urns for pets and people. Friends, family, and customers requested these vessels because they want something that’s handmade and beautiful at a time of loss and grief. I make these urns because I want to be useful during that difficult time. I want to feel that I’m making some sort of difference, be it ever so brief, in a person’s life.

After making cremation urns for a couple of years, I learned that about half the urns I make are kept in the home of a family member. The other half are buried after the funeral service. I began to ask myself, “If I make cremation urns, why do they need to be permanent?” Our physical bodies have no permanence. We become ash and return to the earth. I wondered how could I make something that holds cremains and later degrades in nature. I researched biodegradable cremation urns and only saw manufactured urns made of cornstarch or urns made from a heavy paper that was molded into a clam shell-like form, designed to float in the ocean, and eventually degrade. There really wasn’t much available back in 2008, so I decided to create something from porcelain reclaim and recycled paper. 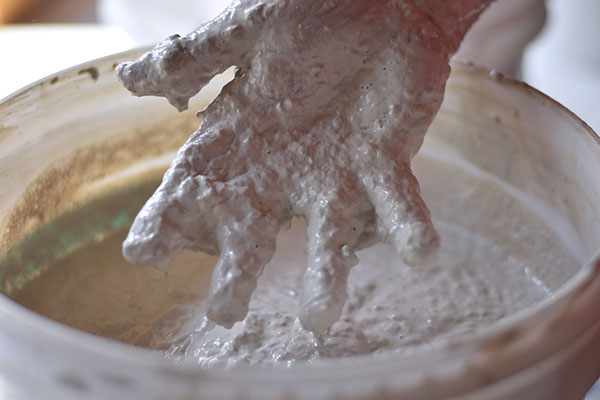 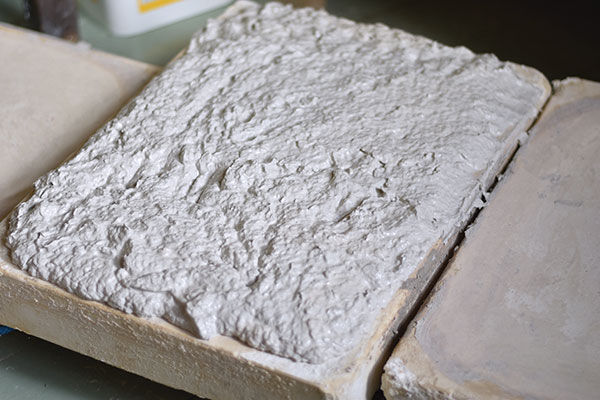 Why Fiber and Not Paper?

The mixture I finally decided on, after much research, was approximately a 50/50 ratio of porcelain reclaim and cellulose fiber. This amount of fiber in the clay is much higher than the average paper clay that’s fired in a kiln, which is typically 10–15% fibers. The large quantity of cellulose fiber means that this mixture works more like handmade paper with some clay in it for added body, and would not survive a kiln firing. The fibers make for a very strong unfired vessel that is as durable as papier mâché. I did a lot of testing to ensure the durability. The urn needs to ship to the customer and arrive in one piece, yet at the same time needs to degrade in a body of water or in the ground.

I prepare two 5-gallon buckets of fiber clay at a time and use it within two weeks, as it tends to mold and stink at that point. If I do make more than I can use within a couple weeks time, I dry it in sheets, and rehydrate it with water at a later date. 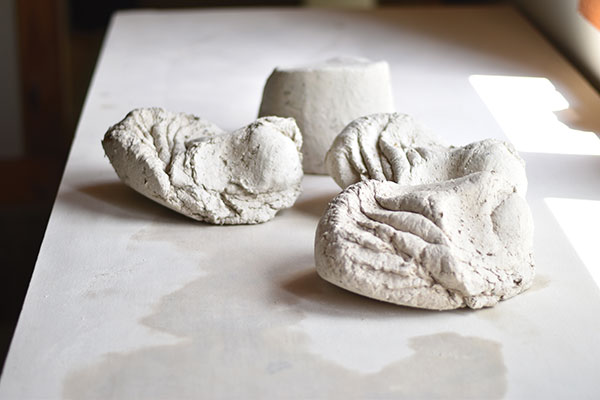 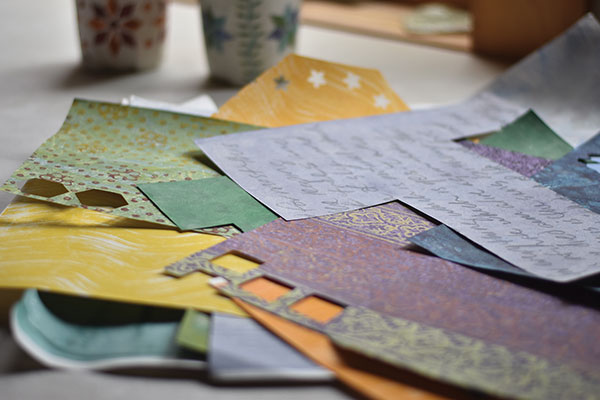 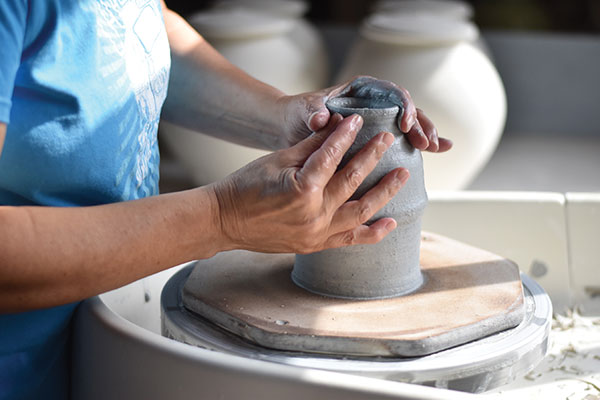 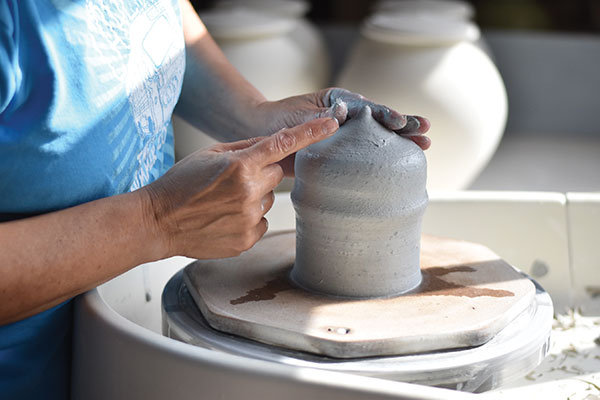 There are many steps in creating an urn. I begin the process by monoprinting colorful large sheets of paper (4), which I then cut into small shapes to create quilt-like patterns. These cut shapes will be arranged on the surface of the finished urn for decoration. The paper pattern will degrade right along with the urn. I only use soy-based ink and 100% recycled drawing paper.

My inspiration for patterns comes from American quilts. The patterns chosen for each urn are determined mainly by the size of the urn. Some of the smaller keepsake urns may have a simpler pattern as they have a smaller surface to work on.

The first urns I made from 2009–13 had wildflowers and leaves pressed into the surface. I found that the flowers faded over time and I ultimately wanted something a little more colorful. I also missed quilt making, which I have no time to do  while running a pottery business. Creating quilt-like patterns using the monoprinted paper allowed me to combine my interests and add more color.

In the beginning, I handbuilt all of the urns I made, because I thought the fiber clay was too difficult to throw. I began to experiment a couple of years ago with throwing the forms, and there is no denying that the cellulose fiber clay is difficult to throw. That said, I tend to like the result of the thrown forms, because I can make the lid and urn form in one piece, then separate them. I feel that the continuity of line from base to lid makes for a strong form. Tip: When throwing fiber clay, it’s very important to spiral wedge the clay; this lines up the fibers with the clay particles, making it easier to throw. I also like to use soft clay.

Center the clay on the wheel and throw an enclosed cylinder (5, 6), being sure to shape and compress the top (7). The smoothed top will become the lid of the urn. 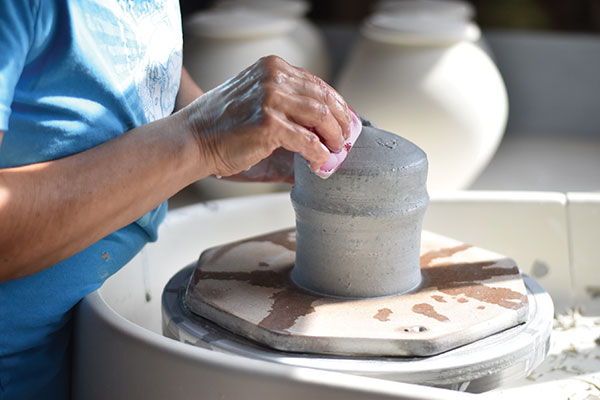 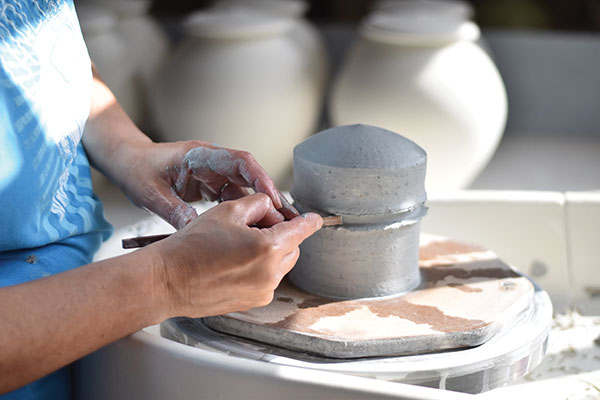 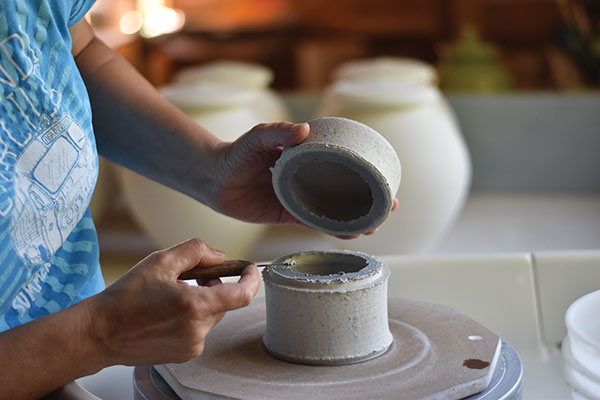 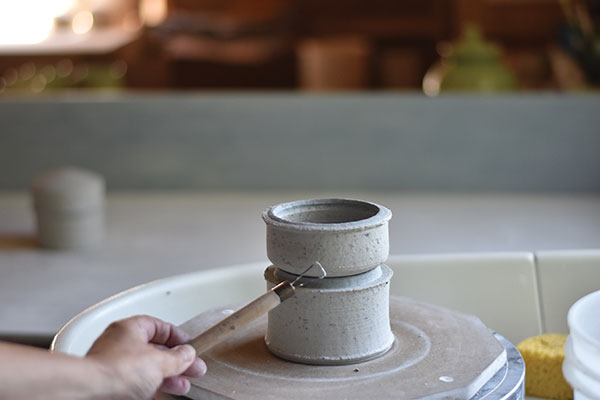 Allow the form to set up, then use a wooden tool to create an indent separating the form into two sections, only pressing about halfway into the wall (8). Use a needle tool to cut through at the top edge of the inverted groove in the wall (9), freeing the lid and exposing the new flange. Once the lid and base are separated, clean up and compress the flange. Trim and reform the lid (10), making sure the components fit together. Cut the base off the bat and trim the foot. Finally, paddle the sides to shape the form (11).

After the urn has stiffened up to leather hard, the form is ready to decorate. Arrange the printed and cut shapes into a pattern (12). I wet the back of each little piece of paper, lightly press it onto the surface of the urn, then paddle the papers into the clay (13, 14). I let the urn dry slowly for a couple of weeks. Once the urn is fully dry, I apply a very thin coat of beeswax to seal the surface.

I’m not sure how long it takes for one of my fiber urns to decompose in the ground. I imagine it depends on where it’s buried—in a dry place, or in a climate that gets lots of rain. I do know for sure that it degrades in water in two hours. 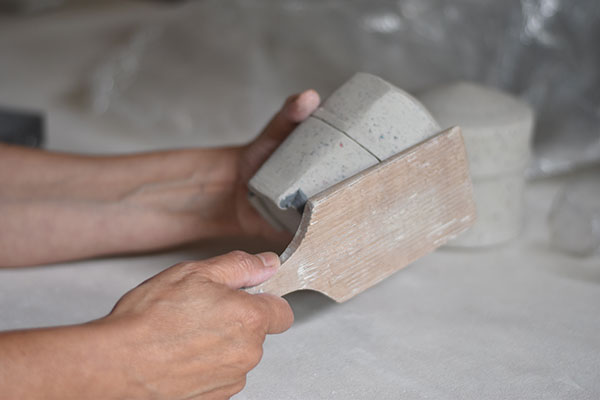 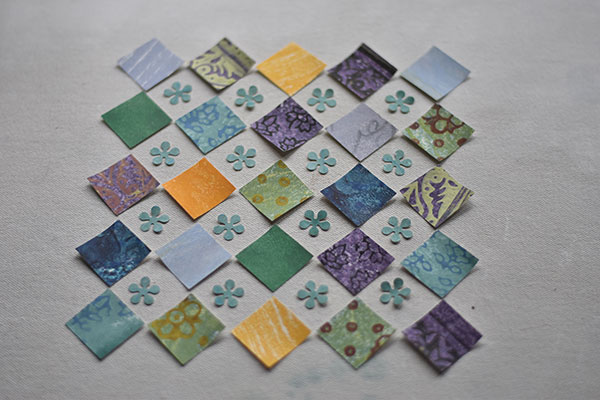 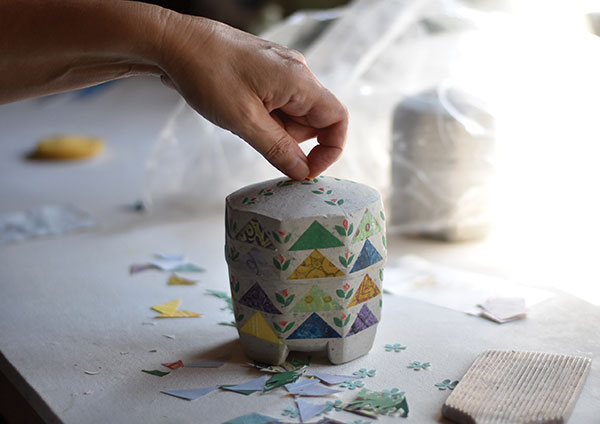 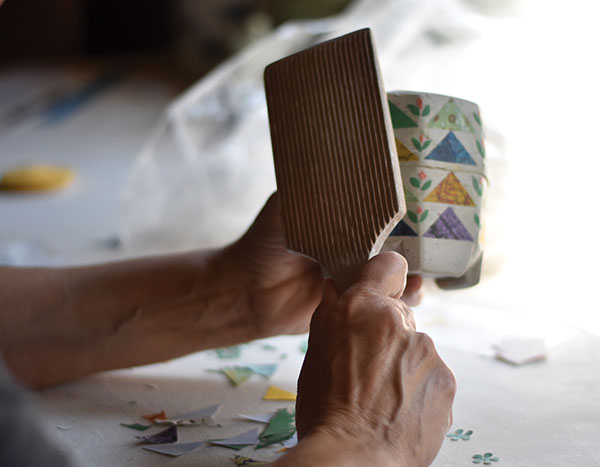 Note: To find more information on paperclay and related techniques, visit Rosette Gault’s website www.paperclayart.com. She has encouraged artists to explore and innovate with paperclay since first introducing new discoveries and advantages with the material in 1991. Gault published the first paperclay book in 1993 and developed the first commercially prepared P’Clay® in 1995. She wrote the how-to article, “Paperclay: A Primer” in the Fall 1999 issue of Pottery Making Illustrated. Her most recent book The New Ceramics: Paperclay Art and Practice (published by UPenn Press/Bloomsbury Press with a second edition printed in 2014), contains recent information on mixing paperclays and using slurries.

Lucy Fagella earned a BFA from Alfred University College of Art and Design. She is a full-time potter and ceramics instructor. Her work has been included in national juried exhibitions, ceramics publications, and home magazines. Lucy is a founding member of the Asparagus Valley Pottery Trail. Learn more on LucyFagella.com,luciaurns.com , Instagram @lucyfagella, Facebook @LucyFagellaPottery, and YouTube lucyfagellapottery .