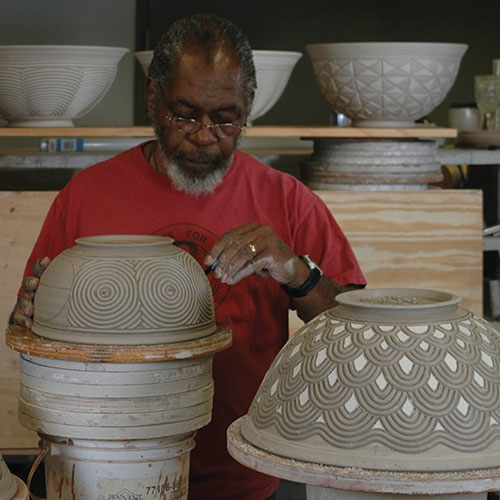 David R. MacDonald was born in 1945 in Hackensack, New Jersey, the third oldest of nine children. He graduated from Hackensack High School in 1963 and was awarded an athletic scholarship to Hampton University (Hampton, Virginia) where he majored in art education. While there he was greatly inspired by noted African American ceramic artist Joseph W. Gilliard. During his studies at Hampton his work became influenced by the political and social issues of the time (the Civil Rights Movement). After graduating, he was awarded a graduate fellowship at the University of Michigan where he studied with John Stephenson and noted African American ceramist Robert Stull. During this time, his work continued to focus on social and political commentary and expand technically. After receiving his Master of Fine Arts degree he joined the faculty of the School of Art and Design at Syracuse University. Looking at a variety of design sources in the vast creative tradition of the African continent, MacDonald draws much of his inspiration from the myriad examples of surface decoration that manifests itself in the many ethnic groups of sub-Saharan Africa (as pottery decoration, textiles, body decoration, and architectural decoration). MacDonald's work spans the complete spectrum of ceramic forms of a utilitarian nature. MacDonald received the Excellence in Teaching Award from the National Council on Education for the Ceramic Arts (NCECA) in 2011.