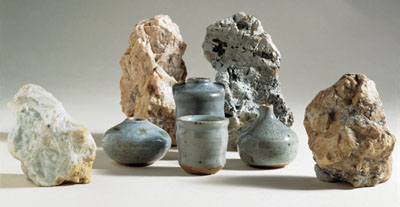 Today, we live in an age of super abundance of ceramic raw materials. Innumerable clays and glaze materials offer us a bewildering array of choices. Far from understanding glazes and these materials as familiar rocks, feldspars, and clays, each with unique personalities, we know them only as white, gray, or brown powders neatly packaged in uniform bags.

But we all know that getting to know them better can only improve our work. Happy learning! – Jennifer Poellot Harnetty, editor

Barbara Beck mixed a glaze consisting of 90% feldspar, 10% whiting, 0.5% red iron oxide and varied the feldspar in each batch to show variation in surface and color. The stoneware pots shown were fired to cone 9-10 in reduction. From left to right the glaze used contains potash feldspar, Cornwall stone, and soda feldspar, with nepheline syenite in the rear. The rocks shown left to right are soda felspar, potash feldspar, nepheline syenite, and Cornwall stone.

Feldspars are minerals of varying composition commonly used by potters. Feldspars form a glassy, white surface when fired high enough. They have a very long range, they begin melting at cone 4 and continue fusing beyond cone 10. They also tend to stiffen a glaze due to their high alumina content.

In ceramics there are two basic categories of feldspars: potash feldspars, in which the primary melting oxide is potassium, and soda feldspars in which the primary melter oxide is sodium. Soda and potash have the highest thermal expansion and contraction rate of all the ceramic melter oxides, they promote color brilliance and luster at most firing temperatures, and they encourage specific color results. Soda feldspars melt at a higher temperature than the potash feldspars; however, the actual flow of the soda feldspar, once it begins, is more fluid and less viscous than its potash feldspar counterpart. Hence, after a firing, the soda feldspar displays a shinier and more melted surface. Both potash and soda melters create a glaze with low surface tension, which means they flow freely over the surface of the clay form. A glaze batch of high surface tension crawls or beads up on itself, leaving bare patches of exposed clay body. Potash has a slightly lower surface tension than soda and has the lowest surface tension of all materials used in ceramics.

Potash Feldspars The presence of potash feldspar in a glaze or clay body has a more refractory effect on the ceramic surface compared to equivalent amounts of soda feldspar. Although potash feldspar actually begins its melt at a lower temperature than soda feldspar, once the melt begins, the formation of leucite crystals causes a slower and more viscous flow.Soda Feldspars Kona F-4 and NC-4 feldspars contain a fair amount of potassium oxide, and their total sodium content is not as high as the total content of potassium in potash feldspars. These feldspars are hybrids that incorporate some qualities of both potash and soda feldspars. This is especially evident when they're compared to stronger sodium materials, such as nepheline syenite. Hence, it's often possible to substitute some soda feldspars for potash feldspars without causing a dramatic surface change.

Substituting When recipes call for an uncommon or extinct feldspar, substitutions are possible, but you may need to make adjustments to other components in the glaze, such as clay, silica, and/or one of the fluxes. In many tests, substituting a soda feldspar for the potash feldspar caused little change in the glaze surface. Of all the glaze cores, potash and soda feldspars produced the least difference when substituted for each other; and can often be interchanged without causing drastic changes in the glaze surface. Potash feldspars can usually substitute for each other in most glaze formulas without producing major changes in surface, provided the silica and alumina content are not too different. The difference in the feldspars' silica content can be compensated for by adding or removing silica from the glaze formula. In any case, before making large-scale substitutions, compare the oxide structure of both feldspars and recompute the percentage oxide analysis of the glaze with the substituted feldspar. 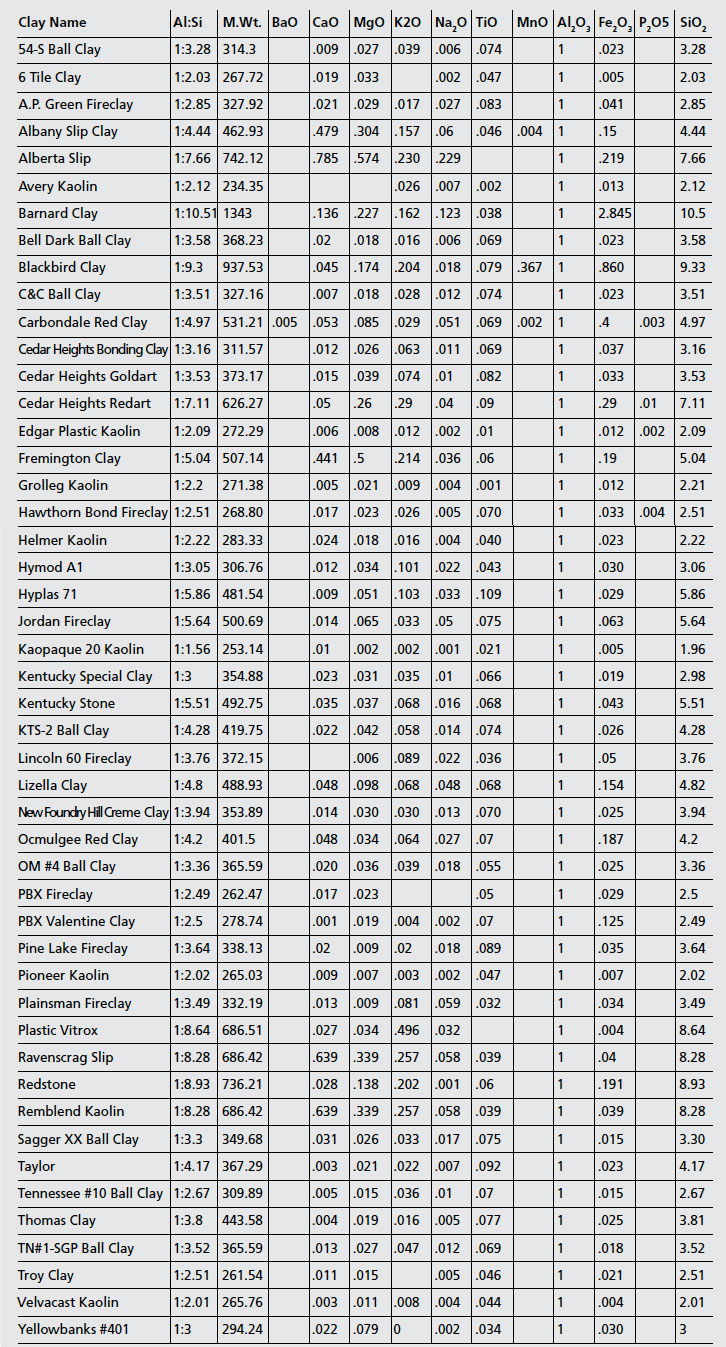 When using Cornwall stone as a substitute for a soda or potash feldspar in a glaze formula, it may drastically alter the glaze surface. It brings an increased amount of silica and less melter oxides to the glaze combination. This substitution can raise the firing temperatures of the glaze, with the result that a formerly shiny and glassy surface may appear more opaque and more matte. Although substituting Cornwall stone for a feldspar lowers the total melter content of the glaze formula, the large amount of auxiliary melters already present in the glaze may suffice to melt the additional silica brought in by the Cornwall stone. The glaze's color may change if Cornwall stone is substituted for a feldspar; it contains more iron oxide and other impurities than do the feldspars. These impurities, together with the increased silica content, can produce distinctive color differences, especially in high iron glazes. Potash and soda feldspars, nepheline syenite, and Cornwall stone provide the basis for the bulk of stoneware and porcelain glaze surfaces.

This article was excerpted from Out of the Earth, Into the Fire, by Mimi Obstler and published by The American Ceramic Society.