Time is Money: How to Maximize Efficiency and Profits in the Pottery Studio Jeff Zamek

Not only is Daniel Ricardo Teran's studio (left) large and light-filled, but it is well organized so that he can make the most of his time. My new year's resolution is to make my studio more efficient and organized so I can be more productive with the precious few moments I get to spend in it.

In this post, Jeff Zamek presents some ideas for improving the efficiency of the pottery studio in order to save time, which in turn saves money. Hopefully the ideas presented today will help you make new year's resolutions to maximize efficiency and, therefore, maximize profits! - Jennifer Poellot Harnetty, editor

The old adage that time equals money is especially true in any labor-intensive activity. Making pottery is certainly an endeavor that requires direct labor to produce pottery for sale. Handmade pottery by definition requires physical attention from the potter during many stages of the operation. There is the forming, trimming, drying, bisque firing, glaze making, glazing and glaze firing.

Additional tasks include studio cleanup, ordering raw materials, sorting and packaging ware, and the list goes on. Indirect labor is also required in different amounts, depending on how the pots are promoted and finally sold. Many potters do not fully realize the number of individual hours necessary to produce and sell pottery.

Back by popular demand! Clay: A Studio Handbook, by Vince Pitelka, one of the foremost authorities on studio pottery, is now back in print! Read more and download an excerpt! 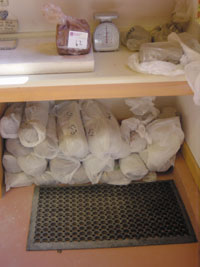 When looking at the true costs of making pottery, the cost of clays, glaze materials, and even equipment, is marginal compared with the time and labor involved. Whether thrown on the potter’s wheel, handbuilt, slip cast, jiggered or pressed, labor is in fact the largest percentage of cost. The potter should always use the rule that decreasing labor costs will have the most direct effect on increasing profits. In many instances, there will not be one large labor-saving element, but several small labor-saving steps will add up to a significant reduction in costs.

Where a potter works is logically the area where the most time is spent. New studio construction offers the best time to plan and set up an efficient workspace. However, an existing studio can be rearranged for greater production and increased efficiency. Whether the studio is located in a large commercial space or a residential basement, the efficient layout of equipment and individual workstations will greatly reduce wasted energy and redundant motion. The potter has a finite amount of time and energy to make pots, and studio layout greatly affects how much time is spent on the actual making of pottery. Moving one piece of studio furniture, such as a wedging table, closer to a potter’s wheel will save steps and time. Placing tables, glaze buckets and storage containers on wheels so they can be easily moved will offer greater flexibility and utility of studio space. Often, the inflexibility of equipment or supplies within the studio limits efficient production of pottery. Minor details in the production operation should not be overlooked, as pottery making is made up of small, labor-intensive, manual operations. 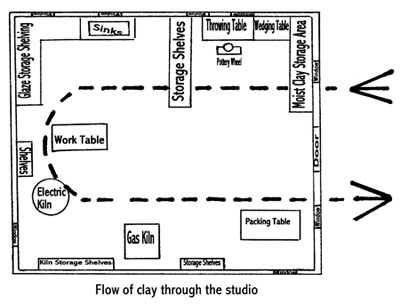 Think of how the moist clay will physically move through the studio in every stage, from forming through packing. A large studio does not necessarily mean a profitable operation. It is quite possible to have a cost-effective pottery in a relatively small studio. One area of production should flow logically to the next. For example, clay delivery should occur near the clay-storage area, which should be near the wedging table, which should be near potters’ wheels and other forming equipment. Moist clay is heavy. One cubic foot of clay weighs about 50 pounds. When the potter has to carry 500 or 2000 pounds of clay into the studio, it can suddenly become very expensive clay. If moving a few boxes of clay seems like a small point, it only illustrates how tight the profit margins have to be calculated in the enterprise of making pottery. Ideally, the potter should take the clay out of the plastic bag, place it on the wedging table, then onto the potter’s wheel or handbuilding table. Casting-slip operations should have the slip storage tanks and the mold-pouring tables within close proximity.

The aesthetic quality of the pottery produced is only one factor in the eventual sale of the pottery. Often, more economically significant factors, such as the effective placement of equipment and supplies within the studio, affect sales of pottery more than the actual look of the ware. Since time and labor are the largest costs in making pottery, it makes economic sense to design all activities within the studio to reduce these two largest factors in production.