Picture this: a mobile anagama; literally a wood-burning kiln specifically designed to fit into a custom trailer, allowing it to travel across the country teaching the wood-fired experience to new communities.

Sounds pretty crazy, right? But when Henry James Haver Crissman got fed up with the red tape involved in building a stationary wood kiln in graduate school, he decided to put the whole thing on wheels. Now, after 7000 miles and 12 firings, Haver Crissman shares how he did it and what he learned along the way in the September 2015 Ceramics Monthly. In today's post, we have an excerpt for you! - Jennifer Poellot Harnetty, editor.

P.S. To learn about the design of Henry Crissman's kiln, and more about the first tour and all the stops that Crissman took the kiln on, check out the entire article in the September 2015 issue of Ceramics Monthly.

Ceramics Monthly: What is the Mobile Anagama?

Henry Crissman: The Mobile Anagama is a modular kiln that must be assembled to be fired and disassembled and packed back into itself for travel. With a team, the kiln can be assembled in 1½ hours, loaded in 3 hours, fired to temperatures in excess of cone 10 in as little as 3 hours using a half of a face cord of wood or less, cooled in 68 hours, and unloaded and packed up in another 2 hours. From arrival to departure the whole experience can occur in less than 24 hours.

CM: What was your original inspiration and how did the project come to be?

HC: My original interest in wood firing ceramics came out of an interest in processes that could help communicate the labor and value of the objects I was producing. As my personal art practice has developed to include more performative, participatory, and site-specific endeavors, I have become increasingly interested in how I can do this with ceramics. In the process, kilns have come to the forefront of my investigations, as phenomenal tools, social centers, and spectacularly abstract spaces.

Prior to building the Mobile Anagama, I was working on plans to build a stationary anagama at Alfred University. When it became apparent that there would be too much red tape to make it a reality, my advisor, Anne Currier, said something like, â€œIf you can't find the right place to build it, why don't you just build one on a semi [trailer]?â€

A few months later my dad offered me our old utility trailer. I knew right then exactly what I wanted to do with it. I wrote, and wound up receiving, an NCECA Graduate Student Fellowship to construct a mobile anagama kiln from recycled materials. The proposal detailed the construction of the kiln and a small-scale tour of site-specific projects that would follow its completion.

As construction began, it became evident the original design would not be able to endure the stress of travel and that a redesign was needed if the goal was to actually safely conduct site-specific firings. A total design overhaul meant an increased materials budget, a decreased time frame for the tour, and the reevaluation of the project's value as an artistic gesture. When considering the value of the project by weighing the material investment against its potential social returns, the new kiln was harder to justify; however, I went forward with the project and organized a Kickstarter campaign both to help raise the additional funds needed and to build a community of supporters who would cheer me on and hold me accountable for my promises. As it came together and the first firing went so well, it became clear that the Mobile Anagama's value could come from its visibility and potential as a model for similar projects. The tour became the parade and testament of the mobile wood-kiln format, a format that inherently lends itself to the types of actions I originally intended to conduct. In this way, the tour was highly successful as it was seen by so many and proved the kiln's functionality and durability, but I'm still waiting to hear whether others are now constructing their own. 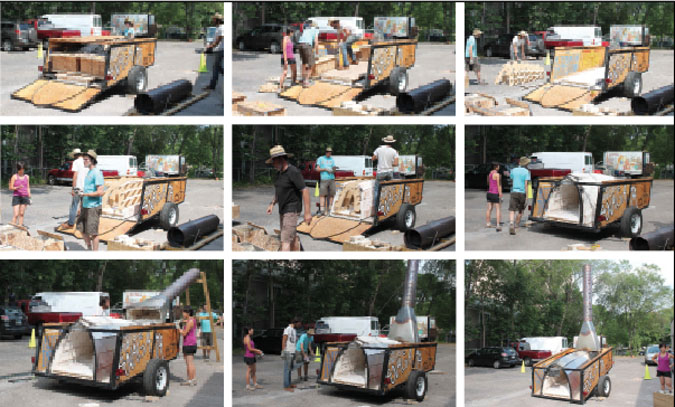 For rough plans to build your own Mobile Anagama along with the complete Mobile Anagama tour book that includes stories from the road, visit www.henrycrissman.com.