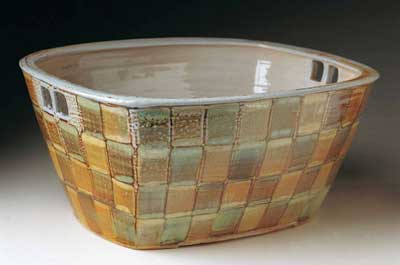 Salt firing and salt glazing have been common practice in ceramics for centuries, initially as an industrial glazing method, and then as an artistic treatment and technique in studio ceramics. Not only does salt glazing seal the ware, but it creates a distinctive orange-peel texture that has become a desirable decorative trait of salt glazed ware.

Today, I am presenting a Will Ruggles and Douglass Rankin slip recipe and tips for salt firing. In addition, potter Cathi Jefferson explains how she used these recipes combined with terra sigilatta and Andrew Wong's Luster Glaze to make the beautiful checkered surface shown here.  - Jennifer Poellot Harnetty, editor 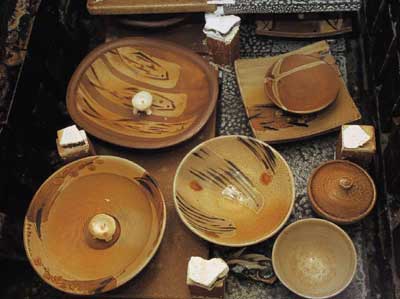 Will Ruggles and Douglass Rankin have been admired for their wood-fired, salt glazed work for years and their slip and glaze recipes have been trusted and used by many professionals for years. They use salt cups in their firings. The ware is stacked in the kiln with salt cups (made of wadding material) filled at the outset, and as the temperature increases, the salt vaporizes and adds just the right amount of sheen to these plates. You can see what salt does to the shelves in this kiln (salt will find silica to react with anywhere it can), and this is why it is necessary to have a kiln and shelves dedicated only to salt firing. If these shelves were used in a kiln that had not been salted, the salt on the shelves would re-vaporize during the firing and salt that kiln and the ware in it.

The "Napper Bowl" shown here is a salt/soda fired stoneware piece that was thrown upside down and a slab applied to the base once the clay has set up enough to support itself. The rim is then finished once it is leather hard using a SurformTM (found in hardware stores) and a metal rib, then damp sponged. To glaze the piece was initially sprayed with a Helmer Kaolin slip (80% Helmer Kaolin and 20% Neheline Syenite). Then, using a sponge brush, the rutile terra sig rectangles are alternated with the Ruggles and Rankin green/blue slip mixed with equal parts of the rutile terra sig.  Each rectangle is then outlined with the 6134 Mason stain in terra sig. Finally the Andrew Wong Luster glaze is sprayed on the inside of the piece. 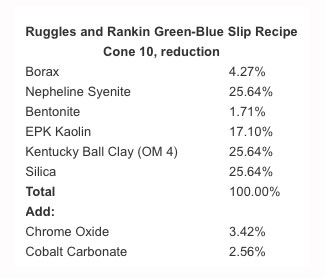 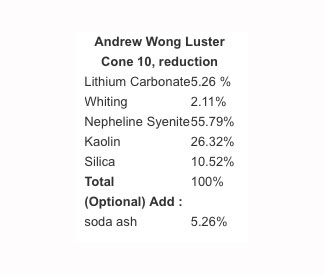 To learn more about Cathi Jefferson or to see more images of her work, please visit www.cathijefferson.com.