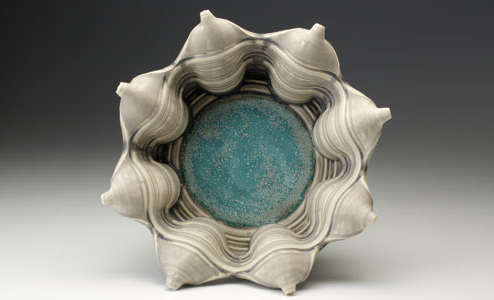 Aysha Peltz’s “Splash Bowls” are inspired by the iconic photograph Milk Drop Coronet by Doc Edgerton (http://edgerton-digital-collections.org). Peltz was captivated by the “elegance with which the image arrests a moment in time” and realized that the exposure of clay to fire does a similar thing.

In today’s post, an excerpt from the Ceramics Monthly archive, Aysha explains how these forms evolved and gives a snapshot of how she creates them. - Jennifer Poellot Harnetty, editor

I adopted the term splash bowl years ago to refer to a family of forms that interest me. The name comes from their resemblance to the iconic photograph, Milk Drop Coronet, by Doc Edgerton (http://edgerton-digital-collections.org). The similarity of form is rather obvious, but more important to me was the elegance with which the image arrests a moment in time. In this regard, the exposure of film to light is not unlike the exposure of clay to fire.

The forms I make reference utility, the familiarity of these forms creating an invitation to look further. The thrown pots themselves are built on basic geometries, cylinders or cones varying in proportion or perhaps a suggestion of volume. To these forms I add layers of texture and dimensional line that respond to and emphasize the actions to follow. The alteration is a push into the inside or outside of the wall, expanding the texture from behind, creating curves and swells in the form. This way of working naturally creates suggestions of terrain, body, and flora; parched earth, a body in motion, or the imminent decay of something overripe. I fire the pots under fluid, translucent glazes preserving these moments in fired clay.

I want my pots to feel as though they have grown naturally and comfortably into their final state. Low, open forms are a challenge because as viewers we have access to both inside and out. With these kinds of forms, the act of pushing on the side wall is often too evident in the finished piece, the obviousness of the process complicating the viewer’s ability to find other references.

Developing and Refining the Form

About the time I was struggling with how to build these forms two things happened. The first was seeing a landscape very different than that of New England where I had lived much of my life. On a trip to Idaho, I was struck by the sense of space implied by mountains bordering vast open valleys. The suggestion of the bowl/platter forms I had been working on was clear. 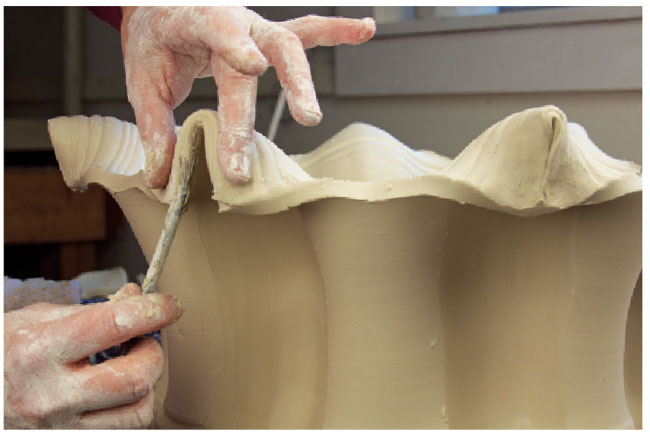 Then, following that trip, I saw Peter Voulkos make a series of platters during a workshop at Alfred University. Watching the physicality and sensitivity that went into making those huge pots energized and clarified for me what excited me about making. Working on a body-sized scale while throwing a pot allowed for big physical gestures and small intim ate moments with the material. Seeing that happen so confidently for Voulkos charged and challenged me to explore scale and gesture in my own work more freely.

Larger-scale pots can obscure their association with use and help the viewer to access the other references that the pots carry. Most of these splash bowls range between 20–50 pounds, the larger ones are more platters than bowls. Without knowing it at the time, Idaho and Voulkos had crept into my work and I became interested in working in relationship to my body size, throwing vases that were as tall as my arm was long and platters as big as I could physically manage. I started to see form more clearly as the curves and shapes became proportionate to me.