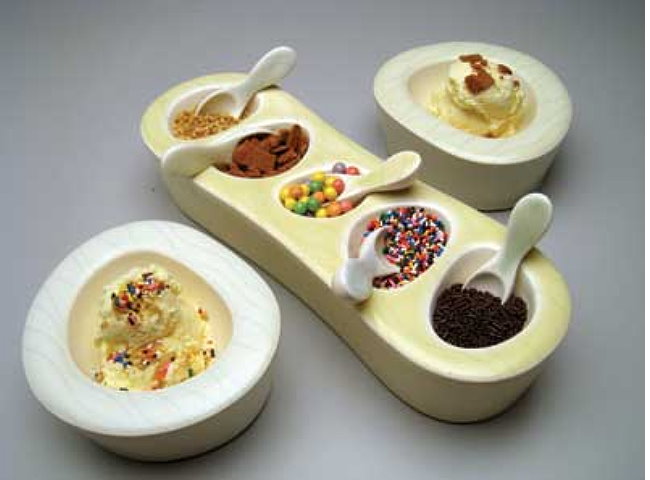 Today, Hiroe shares her process for slip casting double walled forms, from making the pattern and the mold, to the casting part. - Jennifer Poellot Harnetty, editor

I've always had a great passion for food - cooking, eating, setting the table, and sharing in the full dining experience. It's why I make functional pots. The pots I create consist of simple lined forms with muted glaze colors, and the work's minimal aesthetic doesn't compete with anyone's domestic surroundings, nor with the food it eventually holds. The minimal design of my forms create an ideal setting for the display of food. Simple forms allow for beautiful relationships between the forms themselves and the elements contained within them.

I use slip casting in the production of my forms. It's the technique that best satisfies my intent to create immaculately executed and unusual forms. Each new piece begins by carving out a pattern or model, generally made from MDF (medium density fiberboard), from which I then create a plaster mold. Once I have settled upon a design, a meticulous scale drawing is made from which I then begin laying out the MDF pattern. Because there is roughly 20% shrinkage in the casting body, I make the pattern larger than the final piece I'm aiming to produce. To determine how big your model or template form needs to be, you must account for your clay shrinkage. If your clay shrinks 12% and you want to make a 6-inch diameter bowl, divide 6 by .88, which means your model will need to be 6.8 inches in diameter. Many other artists create their patterns out of plaster or clay, but I've found that wood and MDF better suit my needs. I can control these materials better, with the edges of my forms sharper and the transitions fairer. Also, the durability and longevity of the original pattern is a definite bonus. 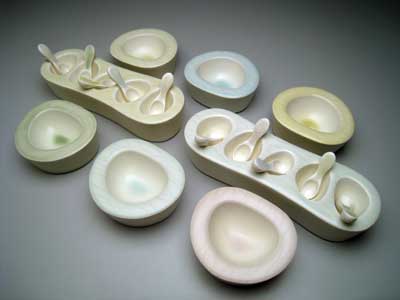 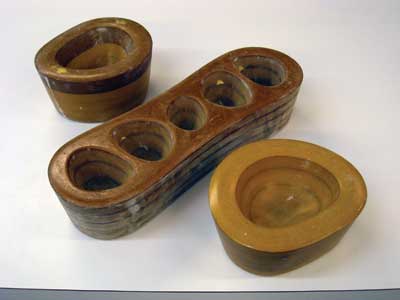 The patterns are fabricated using primarily woodworking tools -- band saw, table saw, sanders, router, and various hand tools including scrapers, rasps, files, and chisels. A great deal of time is also spent sanding and refining the pattern. The final step in preparing the pattern for mold making is to seal it with at least three layers of polyurethane.

First I determine the number of sections the mold will have and identify the location of the plugholes. My molds are typically made in four pieces -- the bottom, two sides and the top. I release the top section of the mold as soon as possible to try to avoid cracks that might form as the clay shrinks. To make this easier, I embed molduct tubing (as shown at left) into one of the plaster sections. The tubing -- which in this case was clamped in place above the surface of the model so it will be completely surrounded by the plaster and therefore not affect the casting surface -- is embedded into the top section of the mold. It creates a porous channel so that compressed air can circulate through the mold and help to release the section from the casting with minimal distortion.

With double-walled forms, you need to make special considerations when making the molds. Simple open molds are not possible; the pattern or model must be entirely enclosed in plaster to achieve a double wall. Plugholes are also needed for pouring the slip into the mold and then for draining it. 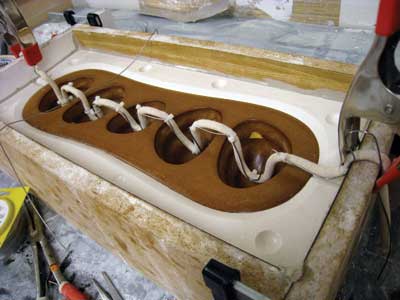 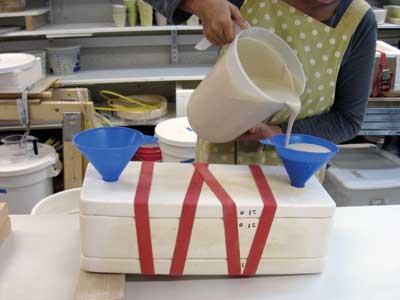 Next I pour casting slip into the mold using funnels and allow it to set until I achieve the desired thickness.Then I drain the slip from the mold and allow the piece to set up for awhile.After draining the slip, I fill in the openings in the form left by the drain holes, otherwise the finished piece will have holes in the bottom. I squeeze a small amount of slip into the pour holes using a ball syringe (as shown here). Next, I plug the holes to keep slip contained within mold then flip the mold over to allow slip to fill the pour holes and finalize the casting.When it's time to de-mold the piece, I blow pressurized air into the molduct tubing and through the plaster, forcing a separation from the slip cast form and the mold (as shown here).I allow the slip cast form to become firm enough to work (leather hard) then remove it from the mold. I use metal scrapers and sponges to clean the edges and any other irregularities that appear on the surface of the form. Using a small drill bit, I poke two holes in the bottom of the form to allow air movement between the inside and outside of the piece. This prevents it from exploding in the kiln as the air contained within the double walled form expands during the firing process. 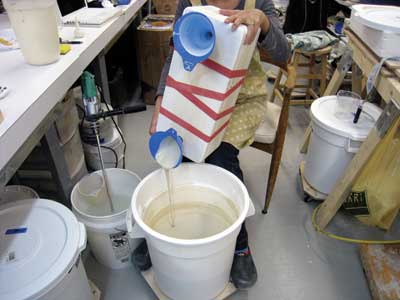 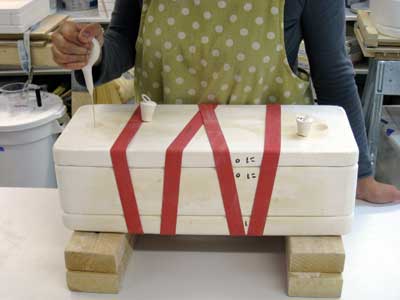 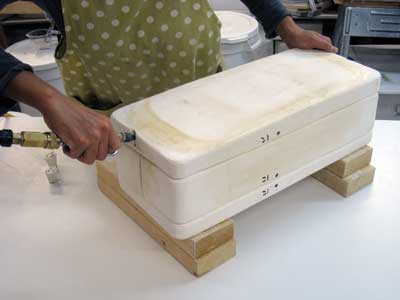 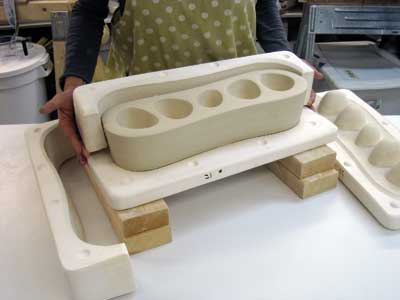