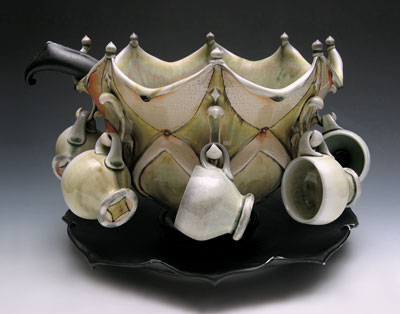 A couple of months ago, potter Lorna Meaden came to town to film an instructional DVD. Post production is in full swing on that DVD now, and it's looking like it will make its debut towards the end of July. To help whet your appetite, I thought I would share this article from Ceramics Monthly a couple years back.

Lorna's pots have a lovely combination of elegant ornamentation with more jovial elements such as the harlequin-esque decoration or her chop mark - a casual "Lorn." Read on to learn more about Lorna's motivations and influences! - Jennifer Poellot Harnetty, editor

Ms. Meaden is going to buy the flowers herself - and the punch and the whisky and the gravy and the sugar and the lemonade and the tea and the candles and the ice and everything else. There's going to be a party.

And at this party, unlike Andrea del Sarto's assertion that, "less is more, Lucrezia" (Robert Browning, "Faultless Painter," 1855) less isn't more. More is more. And perhaps Mies Van Der Rohe and Coco Chanel got it wrong anyway; maybe in this poem del Sarto was simply referring to his wife's infidelity rather than declaring an aesthetic trump. Regardless, Lorna Meaden's most distinctive functional works defy this Modernist mantra in more ways than one. 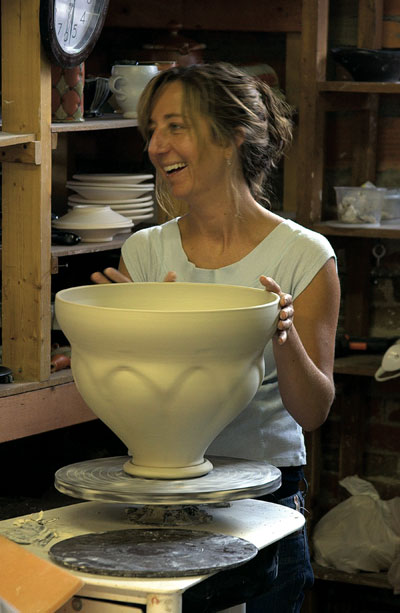 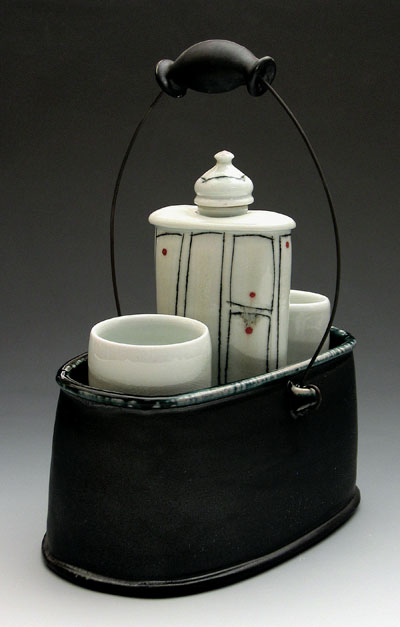 Lots of pots allude to social circumstances or celebrate community meals, but few so equally mirror and design social structures. Few can actually physically engage as many individuals at once as these can. Gratifications invite and then reward, disperse from their tidy places in containers or on hooks; set free for enjoyment by the hostess. Like the porcelain on her beloved wheel, a fete containing one of Meaden's punch bowls would simply revolve around it. You know a pot has character when, in merely beholding it, visions of shoulder rubbing, sparkling socialites appear (eight in this case), and into the ear float bits of conversation. One can feel the tension as guests inch closer to that seductive black ladle, vying with clinking cups in hand for more beverage but behaving to preserve the balance of the occasion, the fragility of the edges. For not only are human borders breakable-clay on clay demands attention.

Perhaps invoked by the piece's pattern of diamonds or the tiny scepter heads dotting the rim, a jester, costumed in patchwork and pinstripe, will creep in and crash the scene. This symbolic twin to the king, sprung from the bowels of the bowl, may begin a rant, playfully, interpreting current dramas, overturning common notions, waxing poetic, his role as fool giving him immunity to the confines of propriety.

Even without the intoxicated company, however, the large, fleshy, green tureen seems to spin on its black platter base like a carnival ride, animated mugs flying, missing only the blinking lights and the music. Yet rhythm pervades. In another corner of the warm, glowing room, near the coffee or tea, maybe, five spoons encircle the undulating perimeter of Meaden's lidded sugar bowl, waiting for their choreographic cue. Echoing the bowl's rim, the horizontal line of its scalloping saucer lifts and falls like the wave of a conductor's hand. Lively mishima (inlaid slip) lines crescendo up the curving volume of the piece, repeated in refrain and rest around the belly, ending up at the top of the lid in a knob of melodramatic vibrato. Never a dull moment at this event! Time to unstack the whisky cups, unstop the flask, put away the bucket! (See Whiskey Bucket on the right). 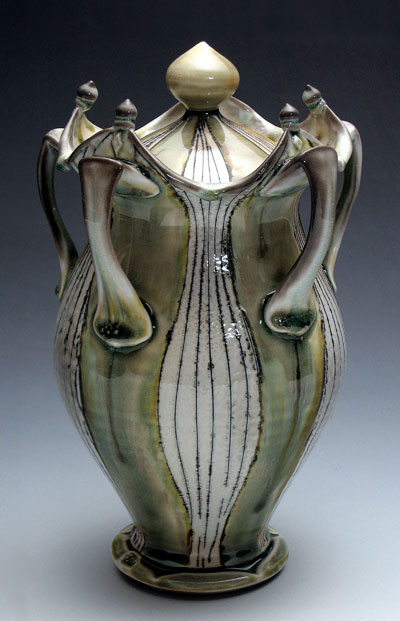 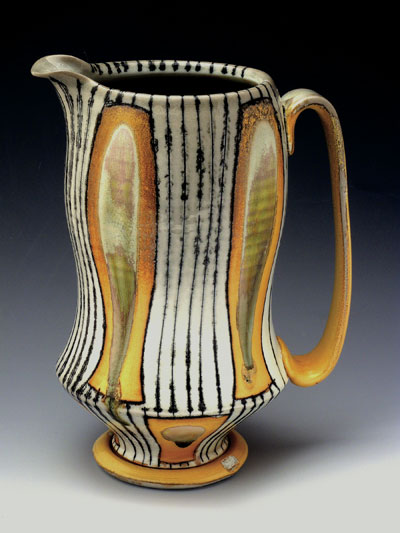 On a more serious note, Meaden is fascinated by how "the cadence of daily life is punctuated by situations that revolve around eating and drinking." To date, her most dynamic aesthetic examinations involve the more indulgent, festive ingesta. Perhaps this is because the ritual consumption of more "dangerous" delights bears a more complex cadence. She can naturally apply her passion for ornament and relish, and demand sensitivity of her guests. For here, a spoonful of medicine makes the sugar even sweeter: sharp points, thin wire attachments and handles must be encountered with the same gentle tempo and delicacy with which Meaden made them. Though the repeated candy-like glaze drips beg for impulsive finger licking, they also, in their very "frozen" nature, join in the chorus of their ceramic family, singing "Stop right there! Slow down . . ." Quick, clumsy removal of the lid or spoons will yield no satisfaction, might even lead to fracture. The beauty of this active - possibly even didactic - metaphor is, ironically, its muteness.

Part of the charm of Meaden's work, despite this layered density, is in fact its soft volume. Characteristically, it is comprised of a color palette that is rich and bright but not loud, a sense of proportion that is formal but not formidable, and a surface that is pretty but not pristine. A result of Meaden's nostalgic motivation to honor family and heirlooms of her heritage, the blend makes sense. Learning to sew as a child, surrounded in her home by 18th century silver and Western European porcelain, Meaden combines the austerity of these mannered vessels with the sensibility of a seamstress. She imbues many of her pots with elegantly lifted feet, textile-like motifs (in terms of dividing and decorating the form) and the antique, "used and loved" aura that the soda kiln bestows upon appropriately placed, action-packed slips and glazes. Bringing together metal and fabric, the industrial and the handmade, the subtle and the jovial, Meaden creates a world that is sophisticated but friendly, geometric and organic. It is the type of tension necessarily present in any successful creative work.

She finds comfort in patching together unlikely academic/historical influences as well as personal ones. Not only do Baroque, Victorian, and pastoral French and English serving sets play a role, but classical celadons from Song Dynasty China, flashing slips of the "Mingei-sota" potters, and Islamic designs present themselves. "It is such an American thing to pull from anywhere and everywhere you want to, referencing whatever you damn well please," she says, quite accurately.

This desire to reconcile differences and to pack as much into the pots as possible might also stem from her career path, which recently has poised her in a spot similar to her subject matter-overflowing with promise. Meaden has an array of experiences to quilt together, to make sense of for herself. She was a studio potter in tiny Durango, Colorado for eight years before receiving her MFA from Ohio University in Athens. Since graduating in 2005, she has not left the ceramics fast track for an instant. She has had teaching positions at Southern Illinois University Edwardsville and San Juan College in New Mexico, and artist residencies at the Archie Bray Foundation for the Ceramic Arts and the Anderson Ranch Arts Center. Somehow throughout all this, she managed to, in her words, "apply to every show I could," and it paid off. In addition to being a featured demonstrator at the 2008 NCECA Conference, she is represented by numerous U.S. clay galleries. She has had a positive response to her elaborate works like these as well as cups, tumblers, bowls, plates, pitchers, teapots, cruet sets, salt and pepper shakers-you name it. From giving workshops to developing her website, Meaden is now a long way from the days of, "making round pots and putting blue glazes on them." Stitching the first epiphany she had at a Julia Galloway workshop years ago to the values and insights embedded by mentor Brad Schwieger, she intends the studio and life she is now building to be based on balance.

But, amid all of this more, and more, and do it all, and more, how does one find balance? Whisky and gravy certainly don't help much in the long term - not to diminish their importance - but they can remind us of some things. Cultural mores, for instance.

James Trilling, author of The Language of Ornament, (London: Thames & Hudson, 2001) posed the idea that craft has become a symbol, a word synonymous with beauty. In reality, before the Industrial Revolution, everything was made by hand (crafted), and certainly this aspect in and of itself didn't make these objects beautiful. Only now, as Trilling describes it, "in the flattering glow of nostalgia," do we categorize the handmade this way. In the past, people had craft like they had air. But not every day did they get liquor, cream or honey; wear jewelry or act with gaiety. Meaden, by perpetuating these extras - these top layers, in diet, in garment, in behavior - via carefully crafted ornamental pots, pays homage to the extravagant, the purposefully beautiful. She achieves this decadence through virtuosity in throwing, altering, and handbuilding with porcelain, using textured press molds, and laboring intensely over layer by incised, scraped, brushed, resisted, and dipped layer.

Demarcating these surface spaces - searching for order - is her biggest challenge, but symmetry and traditional patterns assist. Cadence runs through the assemblage of the wet and fired parts as well. But the beat is speeding up: her details are increasing. So, however, are the demands for Lorna's work. Right now, she is "desperately trying to avoid having a list of pots I'm supposed to make hanging on the wall next to my wheel." Another definition of balance, like the one you have in your checking account (right?), isn't associated with equality, with canceling out. The weight is clearly on one side of the triple beam. Everyone wants steadiness, but, to resurrect the pre-party literature of del Sarto, (via Robert Browning), "A man's reach should exceed his grasp . . . . Or what's a heaven for?"

Ms. Meaden, get ready. The party must go on, and it might go late.