Slip, glorious slip. This versatile liquid form of clay can be used in a multitude of different ways to create and embellish ceramic art.One such method involves using colored slips to create a marbleized look on pottery, which is reminiscent of Staffordshire-style English marbled slipware. 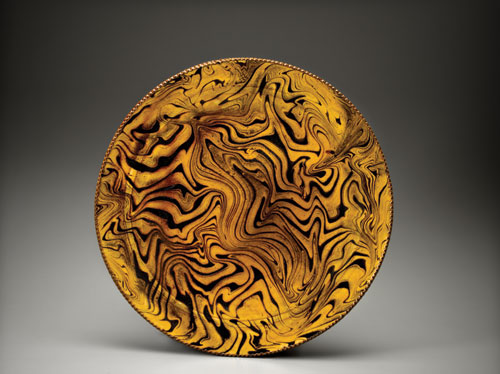 How The Marbleizing Process Works

Gravity and centrifugal force are key elements for inducing the movement or flow of slips during the marbleizing process. The term "joggling" is used to describe the physical act of controlling this movement, which requires very specific, and somewhat awkward looking body and arm movements. The degree of aesthetic success is directly linked to the skill of the potter in controlling the flow of the slips.

How to Make Marbled Slipware Pottery

The making of a Staffordshire style marbled slipware dish begins with a flat clay disk or slab rolled out to a consistent thickness. The slab is supported on a board or bat to bear the wet and still plastic clay. Pour a coating layer of slip over the slab, covering the entire exposed surface, allowing the excess slip to drain off (figure 1). Immediately thereafter, trail a systematic series of lines in a contrasting slip across the entire surface (figure 2). Hold the tip of the slip tube above the surface as it should not touch the wet base slip. 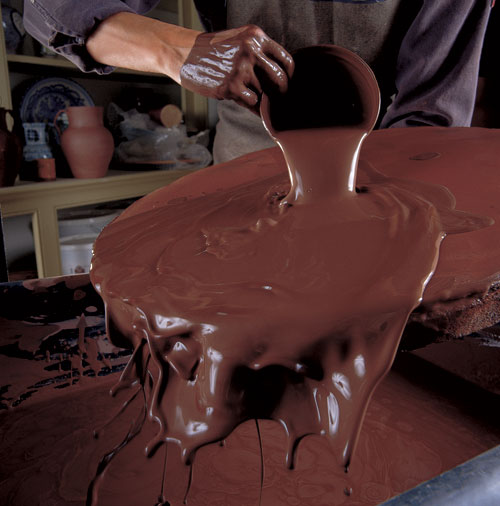 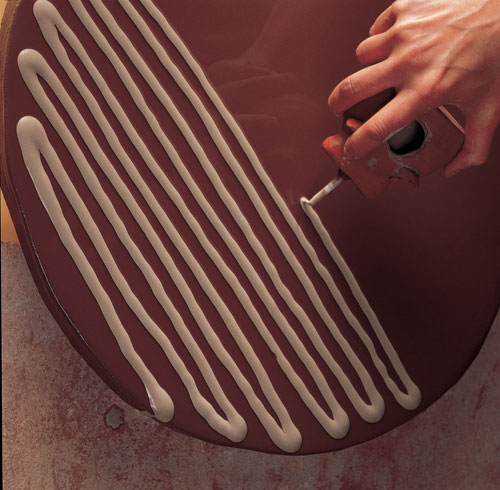 The distance between the tip of the slip tube and the surface of the ground slip dictates the width of the lines; the further from the surface, the wider the line. Trail the lines one at a time, in a continuum within the confines of the slab disc, doubling back for each consecutive line. After the slip lines are systematically applied, the clay slab, still supported by the bat, is then tipped and rotated using gravity to coax the slips to flow (figure 3).

This process will create a pattern of swirls. If the slip is too watery, the lines will run and blur. If the slip dries too quickly, the slips will not flow properly. Two conscious aesthetic and practical decisions have to be made: (1) how much time can be expended before the wet slips stop flowing; (2) how to judge when to stop before the lines of color lose their separation and become muddy. Because both slips tend to firm up quickly, the elapsed time for joggling is usually 30 to 45 seconds. The now marbled slab is set aside to allow the slips to dry further. 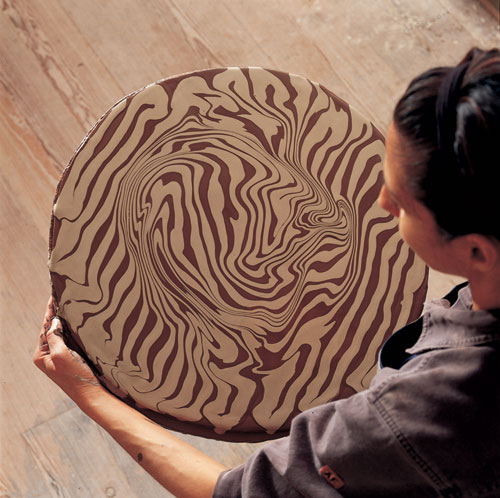 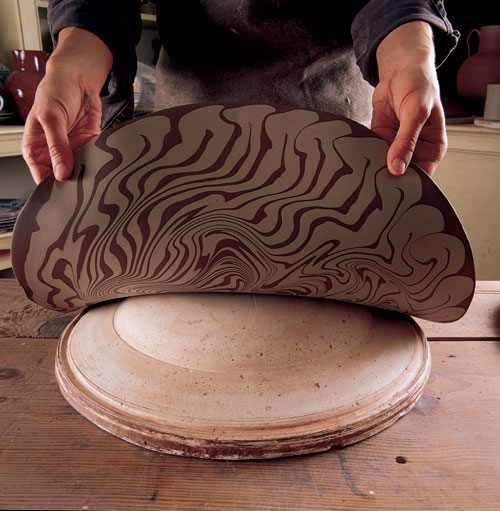 Before the vessel is formed, the slips must be allowed to set up to prevent marring of the marbleized surface yet the slab and the newly slipped surface must remain pliable. If the slab becomes too dry, it will crack. If the slips are still too wet, the slab will stick to the surface of the mold. After the slips are no longer tacky or wet to the touch, the entire slab, which is still plastic, is removed from the bat and placed over a "hump" mold surface down and pressed into shape (figure 4).

These molds were typically made of fired clay although a plaster one is being shown here. Allow the dish to dry further to a leather hard stage. The irregular edge is trimmed with a knife to form a completely circular form and the rim is then crimped or pressed with a coggle wheel to create a pattern. The molding process helps flatten the slips and after glazing, the surface is smooth.