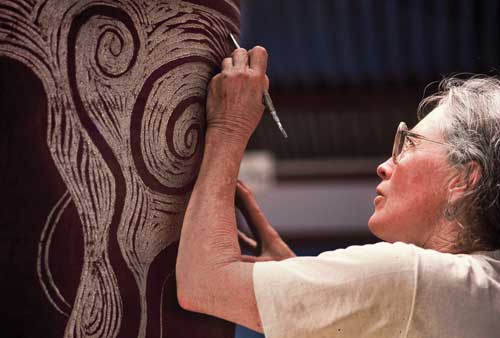 The late Sandy Vitarelli spent most of her life on tropical islands in the Pacific and her pottery reflects that. Drawing on the centuries-old Palauan craft of hand-carved “storyboards” that depicted legends of Micronesian life, her larger-than-life pots feature images of Hawai‘ian plants, sea creatures, and people.

The imagery was not the only way in which her pots reflected her surroundings. Sandy also used local clay and gathered local vegetation such as dried banana leaves, hibiscus hedge trimmings, kiawe, eucalyptus, guava (to name a few) to create her ash glazes. In today's post, I am sharing her ash glaze recipes. Even if you are not lucky enough to live on a tropical island, you could try experimenting with the vegetation in your area. –Jennifer Poellot Harnetty, editor 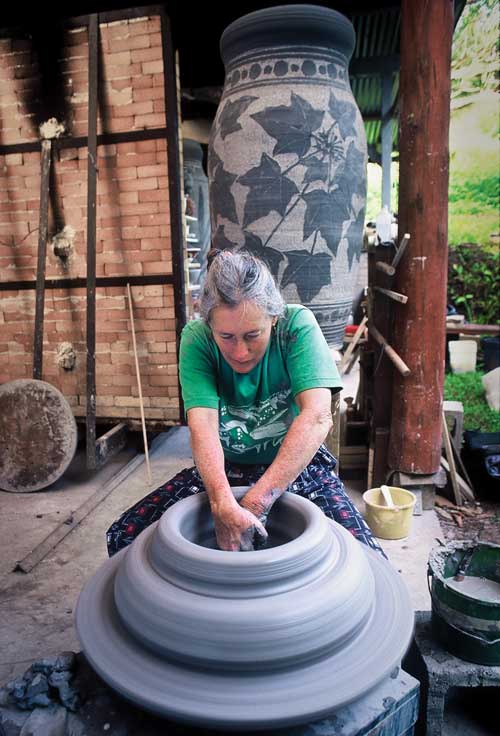 Sandy burned the dried leaves and wood on metal roofing panels and used additional metal roofing as a windblock to prevent the resultant ash from being blown away. She then collected the ash, rinsed it in 5-gallon plastic buckets with water to remove the lye (soluble in water and irritating to the skin, so best to remove it from the ash by this rinsing technique), passed it through an 80-mesh sieve, and dried the ash in the sun on bed sheets so that it could be stored for glaze material. Her glaze notebooks are full of recipes using these various ashes. Her large car kiln would fire to cone 8 at the bottom and cone 10 at the top, so she formulated her glazes for cone 8–10.

Sandy used an iron-rich red earth to make one of her favorite slips for her signature sgraffito designs and for two ash glazes. She collected and processed this red earth from a 12-inch exposed vein in the cliff behind Ho`okipa Beach on the north shore of East Maui. This is the beach closest to Sandy’s house and was also her favorite swimming spot (although the currents and surf are famously treacherous).

Sandy dug a clay-like earth from a roadcut near Kahakuloa on West Maui, which she initially experimented with as a clay. The earth was not plastic enough to use as clay, but when mixed 50/50 with the mainland clay body that she mixed in her dough mixer, she was able to throw on the potter’s wheel without it subsequently cracking. It fired almost black. After a couple of years, Sandy abandoned its use as a clay additive, but formulated two ash glazes from this clay. 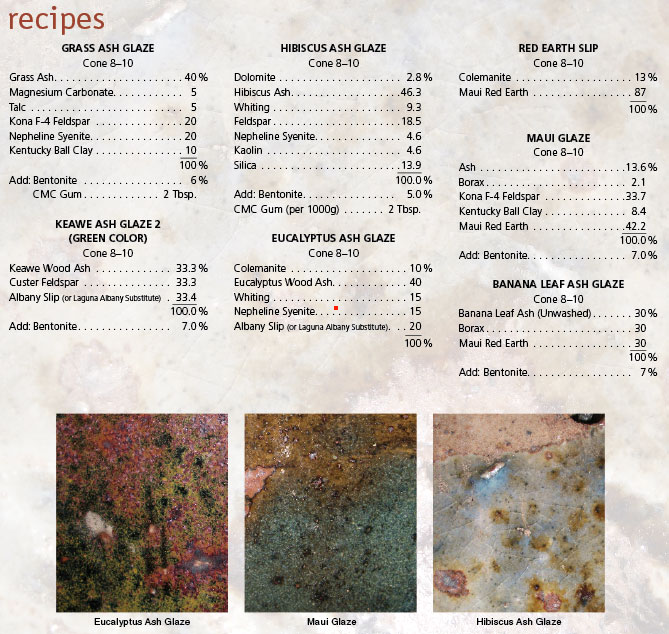