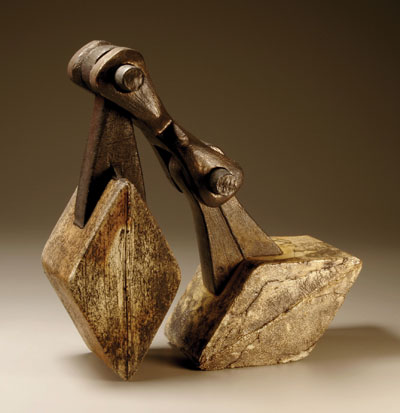 Picture it: You're in the jaws of a grinding machine roughly the size of an Army tank. Never mind that it's turned off. Never mind that you're the only person with the key. Still-it's holding you there, your back pressing into its rough steel tongue, gear-like teeth surrounding you on all sides. It's the day shift at a Detroit factory and the plastic recycling machine has clogged again, this time the twisted shards of milk jugs and soda bottles accumulating in all the wrong places and jamming up the gears. It's your job to get them out first. Then you have to get yourself out.

So it went for nearly twenty years for Kenneth Baskin. Born in the epitome of an industrial city with an aptitude for installing, repairing, and fabricating machinery, this work seemed a natural step. "At that time, I did not possess the personal tools or skills necessary to follow a life in art," says Baskin. One class at a time, he learned basics on the potter's wheel through a community college. After several years, ceramics became a "serious hobby," even though Baskin still viewed the artist's life as an unattainable fantasy. In 1998, this hobby became a dream he could no longer ignore and he enrolled in a four-year college with aspirations to study ceramics and teach. 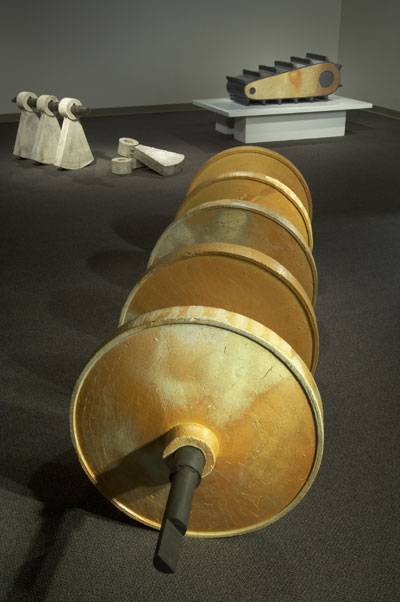 With all mediums, there exists the notion that an artist must pay respect to the life experiences that shaped him the most. Call it source material or call it biographical influences; this acknowledgement happens consciously or subconsciously and is evidenced in the work itself. From roughly 1998 to 2007, Baskin's work did just that. "This work was dealing with the city from the perspective of industry-the grit of the city and urban decay. The way I was using color and texture to break up the space has a lot to do with the idea of contrasts, relationships, and strength of line," says Baskin. "I decided to focus my attention on the micro world. By enlarging objects, we view them differently. We can understand the formal beauty of line, shape, and form." 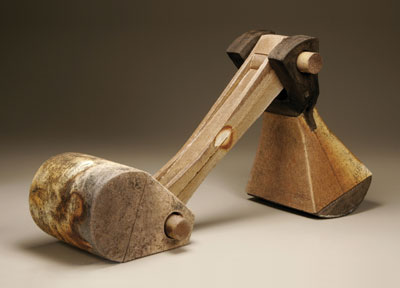 Developing techniques he still uses today, Baskin fired some pieces up to five times to achieve a certain effect. The first, and highest, firing is always in an atmospheric kiln for a spontaneous, natural looking surface. Adding silicon carbide to slips, Baskin accomplishes a gritty, textured surface. Additional layers of glazes and a black wash fired at lower temperatures complete the design.

By 2005, he finished the first round of his 20th Century Artifact series, which relied heavily on abstracted forms that echo the industrial world. Altering the scale and shape of these pieces separated them from their intended functions and invited viewers to consider their own relationships to tools and machinery.

When an artist has attained some level of critical distance from the life experiences that shaped him the most, he is free to create with a more deeply imaginative vision. Union (2007) was a pivotal piece for Baskin, as it represents the first time he connected two ceramic objects to imply motion, while at the same time immobilizing the forms by their very size and structure. "When I put the two together, they spoke to me about interpersonal relationships. I understood that this piece needed to be scrutinized. I stopped what I was doing and started to think about the implications of the relationship the forms carried." 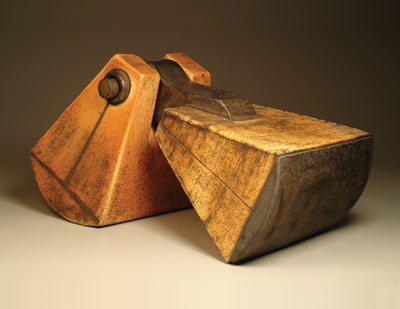 Baskin spent the next two years exploring these implications, adding conceptually sophisticated pieces to his 20th Century Artifact series. Every form in the series is an abstraction of industrial objects that show evidence of the human touch, yet Baskin's newest additions carry the seeds of narrative tension. There is always a push-pull between the notions of connecting and disconnecting, balancing and unbalancing, moving and staying put. Baskin hopes this work will call attention to the fact that the Technological Age is replacing all evidence of the hand. The tension between our roots as a people who built tools for survival and our future as a people with unparalleled technological tools can be summed up in this pressing question: If technology has become the new definition of humanity, by what means do we measure our humanity and, ultimately, what does it mean to be alive? 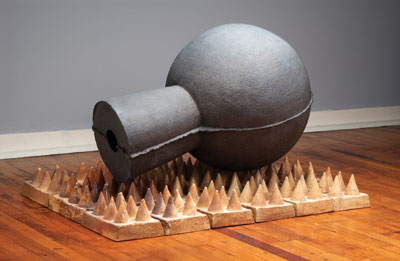 Appropriating the language of the industry, Baskin fabricates his larger forms from slabs and molds. He incorporates steel when necessary for shipping and assembly. He also uses wood trays engineered to assure each ceramic piece is straight and level before final assembly and detailing. Shaped by early experiences physically crawling into industrial machines, the artist now creates work that conceptually crawls into the human machine. "I often equate the idea of machines to us," says Baskin. "Machines have a skeletal structure that protects and houses all of their necessary functioning parts (internal organs), lubrication lines (blood), and a functioning brain with a rhythm of sounds they produce that can diagnose potential problems." 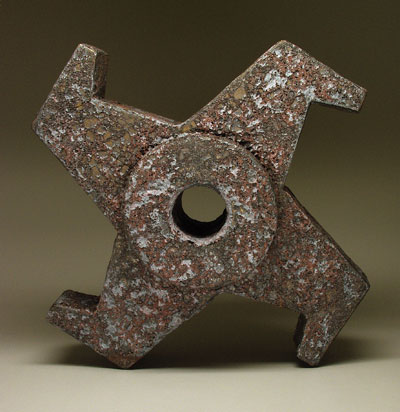 In 2010, Baskin will show his latest work in a solo show at Goldesberry Gallery in Houston, Texas. This will include a series of large, altered crucibles. He also plans to work collaboratively with Virginia Scotchie, Scott Meyer, Ted Metz, Rick Hirsch, and Michael Rogers on a group show at Rochester Institute of Technology's School for American Crafts.

Kenneth Baskin teaches at McNeese State University in Lake Charles, Louisiana. He has traveled twice to Taiwan as a visiting artist and guest instructor at Tainan National University of the Arts and National Taiwan University of the Arts. He is represented by Blue Spiral 1 Gallery (bluespiral1.com) in Asheville, North Carolina.To learn more visit kennethbaskinsculpture.com.

the author a frequent contributor to CM, Katey Schultz writes from her home in Bakersville, North Carolina. She is the author of Lost Crossings, a collection of contemplative essays. Her current work includes a series of essays about artists. To learn more, visit katey.schultz.googlepages.com.